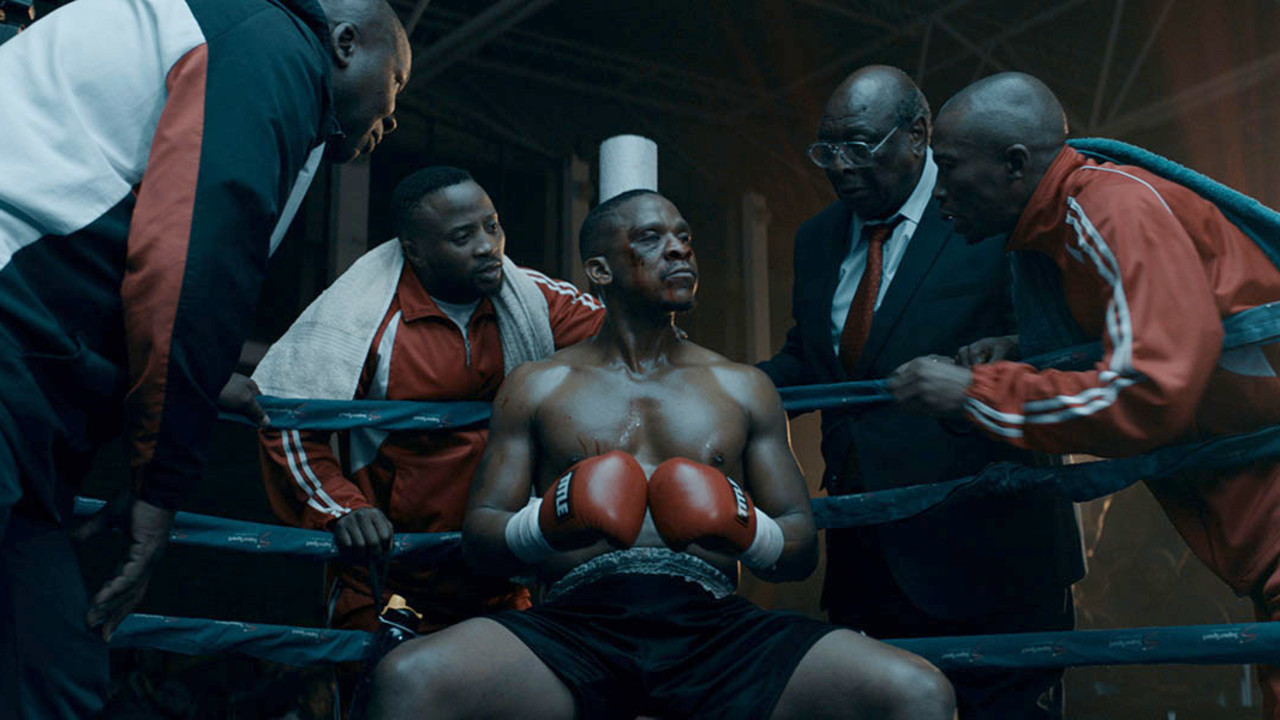 Knuckle City is a gritty, raw and riveting exploration of the psychology of a boxer from the Eastern Cape that dissects notions of inherited toxic masculinity and the underbelly of the fighting world.

A slice of street life in South Africa’s Mdantsane township, known as the boxing mecca of South Africa, Knuckle City follows the journey of Dudu Nyakama (Bongile Mantsai), a down and out ageing boxer as he struggles to attain the one fight that he believes will uplift his fractured family. Contending that the underbelly of the boxing world is rife with criminality, Dudu unwittingly enlists the help of his reckless but resourceful, gangster brother who’s coming out of jail. Haunted by the ghost of their father, Dudu soon finds that the fight at home is far more challenging than any opponent he can possibly face in the ring.

“Growing up in Mdantsane in the 80’s and 90’s was an experience that has shaped the entirety of my life,” says Jahmil. “The energy of the landscape, and the visceral fight for survival that is palpable on the streets, has inspired in me a deep yearning to chronicle the lives of its inhabitants through cinema. “

“Our aim was to bring more awareness to boxing, so we partnered with world boxing champion Zolani Tete to bring authenticity to the movie.,” says producer Layla Swart.

“We are looking at the world of crime in Mdantsane versus the world of boxing,” says Swart. “We are looking at what the fight for survival is about on a deeper level. The film is a gritty and authentic glimpse into the street life of one of South Africa’s largest and oldest townships, packaged in an entertaining and accessible feature film. It’s a tangible manifestation of the evolution of the South African narrative, a slice of life in a largely undocumented corner of the country. The film is a much-needed addition to the canon of South African cinema, where the less discussed aspects of the residue and repercussions of our collective national past, culminate in the immediate issues confronting us in the present day.”

“It was my intention to capture the essence of life in Mdantsane, and the restless pursuit of being a champion within a society that often dictates, you are a failure,” says Jahmil. “I am determined with this film to give audiences a glimpse into a world rarely seen, and a deeper understanding of the multi-faceted individuals inhabiting our land.”

“When I looked at boxers, doing a lot of research about the fighters, it always seemed like the fight at home was always bigger than the actual real fight—the opponent that they were fighting. The day to day seems to always defeat these guys. Obviously, it was taking a very entertaining perspective on the situation, but from a documentarian perspective, there’s a lot to be said about a place like that. Mdantsane post-1994 has produced about 17 world champions in one division or another. Which is insane. Absolutely insane. And it’s literally this reality of going broke—literally giving your all to try and get out of the streets. But a lot of these guys don’t have the skills to deal with life. “

Jahmil X.T. Qubeka is one of South Africa’s most acclaimed and prolific filmmakers. Jahmil has been internationally and locally acknowledged for his directorial work, and has premiered feature films in almost every significant festival across the globe.

Jahmil has directed a plethora of documentaries, television dramas, commercials and feature films. He has received the highest accolades for his work including a Peabody and a BAFTA, and has persevered and triumphed in this testing industry despite coming of age in a turbulent period of this country’s past.

Jahmil’s sophomore feature film ‘Of Good Report’ (2013) went on to garner multiple awards and plaudits. It had its World premiere at the Toronto International Film Festival and is also the first African film to be selected for official competition at the London BFI International Film Festival. The film went on to win a BAFTA, several SAFTAS and multiple African Movie Academy Awards.

In 2016 Jahmil was selected alongside Walter Salles and Jia Zhangke to represent South Africa with his short film ‘Stillborn’ in a BRICS Anthology Collection which premiered in China (2017).

Jahmil’s 2018 film ‘Sew the Winter to my Skin’ was selected for the exclusive Cannes L’Atelier program (2017), awarded the Berlinale World Cinema Fund, premiered at the Toronto International Film Festival and was chosen to represent South Africa at the Academy Awards in the Best Foreign Language Category. The film has won numerous awards including Best Film at the SAFTAs and Best Director at AFRIFF, with critics hailing it as a brave departure from the norm of South African cinema.

Jahmil is co-owner and Creative Director of the award-winning company Yellowbone Entertainment and is a visionary of South African cinema, striving always to create authentic, ground-breaking work of the highest standards.