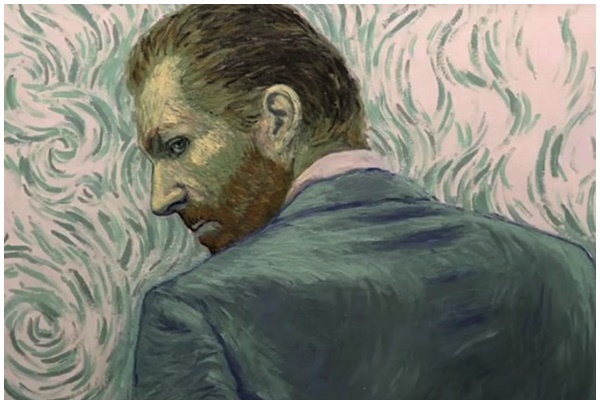 As remarkable as Vincent’s brilliant paintings, is his passionate and ill-fated life, and mysterious death.

Every one of the 65,000 frames of the film is an oil-painting hand-painted by 125 professional oil-painters who travelled from all across the world to the Loving Vincent studios in Poland and Greece to be a part of the production. As remarkable as Vincent’s brilliant paintings, is his passionate and ill-fated life, and mysterious death.

Loving Vincent had a 7 year production journey – director Dorota Kobiela had originally planned it as a short film. Before they began writing the script, Dorota Kobiela and Hugh Welchman read 40 different publications about Vincent and visited 19 museums in 6 countries to view around 400 Van Gogh paintings.

A graduate from the Academy of Fine Arts in Warsaw, Dorota Kobiela was awarded the “Minister of Culture scholarship” for special achievements in painting and graphics for four consecutive years. Through friends Dorota discovered animation and film, and immediately threw herself into learning these new artistic disciplines, attending The Warsaw Film School, Direction Faculty.

For her sixth animated short, Loving Vincent, Dorota aimed to combine her passion for painting and film, and intended to paint the entire film herself. However once she expanded the project into a feature film the task of writing and directing was such that she had to content herself with directing the 125 painters. Loving Vincent is her feature film debut.

Hugh Welchman – co-Writer, co-Director and Producer, BreakThru Films graduated from Oxford University with a degree in PPE and a vague notion of wanting to make films. He supported himself through teaching history, selling carpets, and even selling fish, while he joined various grass roots film cooperatives in London. After a few disastrous experiences, where the drama was all behind the camera instead of in front of it, Hugh sought out training at The National Film & Television School.

His graduation film, Crowstone, won the Cinefoundation Prize at the Cannes Film Festival, and he was awarded the Sam Mendes Shakespeare Prize. He got his first professional experience producing short films for Monty Python, and then set up BreakThru Films.

In 2008 Hugh was awarded an Oscar for BreakThru’s first major production, Peter and the Wolf. The film also picked up several other top prizes including the Annecy Cristal and the Rose D’or. Peter and the Wolf premiered at a sold out Royal Albert Hall accompanied live by The Philharmonic Orchestra, then at the Hollywood Bowl, and has since been performed at over 70 concert halls worldwide.

His next film, Magic Piano & the Chopin Shorts premiered in Beijing’s Forbidden City with pianist Lang Lang, then at London’s South Bank Centre and New York’s Lincoln Centre, and has since been performed in 30 major venues around the world with live solo piano accompaniment.

After falling in love with Polish painter and director, Dorota Kobiela, Hugh also fell in love with her film project, Loving Vincent, and has been working with her on it ever since.

Development of Loving Vincent began  in 2008, and involved several years of testing and training before painting on the shots used in the final film began.

The Loving Vincent team produced 377 design paintings in the early testing stages. 5000 artists applied to work on Loving Vincent. Selected painting animators had to successfully complete a 180 hour training program to then start work. A Kickstarter campaign was launched in 2014 to fund part of the painters training process.

Loving Vincent was first shot as a live action film with actors who worked on sets specially constructed to look like Van Gogh paintings, or against green-screens. Then this reference footage was used to hand-paint the film frame-by-frame in oils.

125 painters, 65,000 frames, 6500 tubes and 1300 liters of Royal Talens paint were used in the making of the movie. The team decided to make Loving Vincent in the Academy ratio as it is closer to the composition of most of Van Gogh’s paintings. 12 frames of individual oil paintings make up each second of Loving Vincent, with 65,000 paintings forming the entire film.

The painters spent up to 10 days painting one second of film. Each frame was painted 67cm by 49cm on canvas and was recorded with a Canon 6D digital stills camera at 6k resolution.

The majority of the painting animators worked in a studio in Gdańsk (Poland), but there were also smaller teams of painters in Wrocław in Poland and in Athens, Greece. Each painter worked inside a Painting Animation Work Stations (PAWS) designed especially for the project. There were 97 PAWS in 3 studios in 2 countries.

The mesmerising opening shot of the film, descending through Van Gogh’s The Starry Night, contains over 600 paintings and took three painters a combined total of 14 months to paint.

No other artist has attracted more legends than Vincent van Gogh.

Variously labelled a martyr, a lustful satyr, a madman, a genius and a layabout, the real Vincent is at once revealed in his letters, and obscured by myth and time. Vincent himself said in his last letter: ‘We cannot speak other than by our paintings’. We take him at his word and let the paintings tell the real story of Vincent van Gogh.

Vincent van Gogh created over 860 oil paintings and 1000+ drawings in just 9 years, and 120 of them were incorporated into the film. For some scenes in the film, like Vincent’s early life, there obviously weren’t any paintings of his painters could draw from. So the team decided to paint these flashbacks in black and white, in the style of photographs from the era. Vincent van Gogh wrote over 800 letters during his lifetime, and many direct quotes from them are included in the film.

Hand painted elements have been a part of film since its birth. Painted backgrounds were included in the first productions of Meiliers in 1897. The first painting on glass backgrounds came in the early 1900’s, and were a staple of film all the way into the 1980s, after which digital painting and compositing started to take over.

Painting animation, where the paint actually defines the movement, is actually a relatively recent form of animation. I haven’t found the very first one, but it started to come to prominence in short film competitions in the 1970’s, and its most famous proponents are Canadian-American Caroline Leaf and Russian Aleksander Petrov. Since winning his Oscar in 1999 for Old Man and the Sea Petrov has been trying, unsuccessfully, to raise money to do a feature film in this format.

In this form of animation oil paints mixed with other substances to make them dry even more slowly are applied directly onto glass, and moved about in wet form from frame to frame. So the artwork is continually reworked, and replaces the artwork of the frame before. There are only a handful of animators/directors recognised for having mastered this form of animation. They only make short films, and often take years making these films, animating them alone or with one or two collaborators.

The main barriers to making this technique as a feature is there aren’t many people who can do it, it is seen as an artistic niche (often because of the art direction and story selection), and it is very labour intensive.

Everything you see on the screen in Loving Vincent is painted by hand. This is in contrast to Snow White where you see movement that started off as pencil, then became ink, and then coloured in.

Creating the movement only with brushes and oil paints is different from first tracing and then meticulously colouring in an outline.
Snow white was made up of many elements that were hand painted (over 200,000 elements on cels and also hand painted backgrounds), but it wasn’t painting animation, and it wasn’t only painted- it was drawn, it was inked, it was combined in a rostrum camera.

At all times in Loving Vincent you are seeing a single canvas that has been hand painted.

In terms of what to call our film.  I believe it is the first fully painted feature film. Rotoscoping or not rotoscoping

First lets clarify our production process.
1. We shot live action material. About 80% against green screen and 20% against sets.
2. We composited live action material with matte paintings which our painting created in the computer, mainly in photoshop
3. We added 2d and 3d animated elements, such as blowing leaves, flying crows, horses, trains, into certain shots.
4. These reference materials were then the basis for the painting animators to do their shots.

Those painters who were animating black and white quite faithfully followed the reference material, and I would characterise this as pure rotoscoping.

Those painters who were animating Vincent style, which is about 70% of the film, could only use the reference material as a guide. They had to then re-create it in Vincent style based on Vincent’s paintings and also on the Design Paintings that we made with 20 painters over the course of a year, to create the design and the world of Loving Vincent.

Also we never bothered to provide movement of skies or water or twinkling/radiating of stars, lights etc, so all of this was done by the painting animator.

Loving Vincent was first shot as a live action film with actors, and then hand-painted over frame-by-frame in oils.