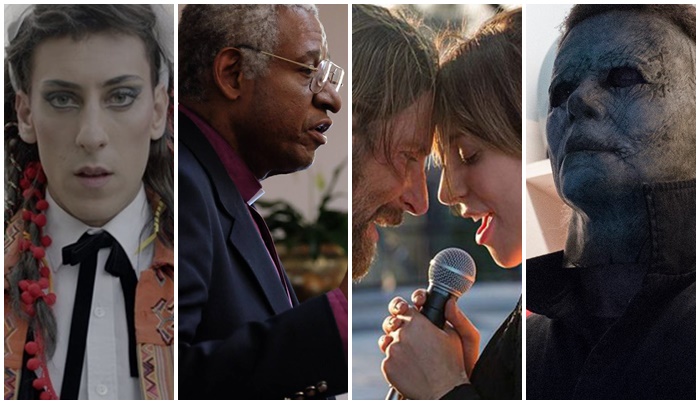 The rousing South African Kanarie is a highlight of the 17 films Released In South Africa during October 2018.

A STAR IS BORN In this new take on the tragic love story, Bradley Cooper plays seasoned musician Jackson Maine, who discovers—and falls in love with—struggling artist Ally (Lady Gaga).  She has just about given up on her dream to make it big as a singer… until Jack coaxes her into the spotlight.  But even as Ally’s career takes off, the personal side of their relationship is breaking down, as Jack fights an ongoing battle with his own internal demons. The cast of “A Star is Born” also includes Andrew Dice Clay, with Dave Chappelle and Sam Elliott. In addition to playing Ally, Gaga, who earned her Oscar nod for the song “Til It Happens to You” from “The Hunting Ground,” performs original songs in the film, which she wrote with Cooper and a handful of artists, including Lukas Nelson, Jason Isbell and Mark Ronson.  All the music is original and was recorded live. It is directed by Bradley Cooper.It marks the third remake of the original 1937 film, which was adapted into a 1954 musical and then remade as a 1976 rock musical with Barbra Streisand and Kris Kristofferson. Feature: A Star Is Born – An Authentic Story That Speaks To The Timeless Nature Of Human Feelings And Failings. / Trailer / Now showing

BABY MAMAS It follows the daily lives of four (middle class) friends, played by Mosese, Mdoda, Dineo Ranaka and Kay Smith, as two of them struggle with the challenges that face single mothers, another finds out she’s pregnant, and the other grapples with the fallout of an abusive relationship. Four women share all their experiences on the joys and woes of being single Moms, while still searching for true love. This is a comedy drama revolving around the daily lives, loves and drama of four professional women who are all in different stages of their own real-life baby mama drama. A sisterhood develops among these four very different women, as they find in each other the strength and courage it will take to navigate the treacherous waters of the relationships, good and bad, that they have with the men in their lives.Directed by Stephina Zwane. Read more / Trailer / Now showing

FIRST MAN Based on the authorized biography “First Man: A Life Of Neil A. Armstrong” by James Hansen. NASA historian James R. Hansen got rare direct access to Armstrong, a test pilot-turned-astronaut who was so driven to reach the moon and play the role of American hero that he became known as “the Ice Commander.” Armstrong had a family tragedy before Apollo that turned him into this driven astronaut, and he became such a perfect hero that while Buzz Aldrin was announced to be the first man on the moon, NASA reversed its decision because Neil was regarded as more heroic. Armstrong returned from the moon as one of the most famous men on Earth but didn’t capitalize on it with a political career or endorsements. He reconnected with his family, shut out the world and became an intensely private man. Directed by Damien Chazelle. Screenplay by Josh Singer. With Ryan Gosling, Corey Stoll, Kyle Chandler, Jon Bernthal, Claire Foy, Jason Clarke, Kyle Chandler, Patrick Fugit, Ciaran Hinds, Ethan Embry, Shea Whigham, Pablo Schreiber. Feature: The riveting story behind the first manned mission to the moon / Trailer / Showing from 26 October

GOOSEBUMPS 2: HAUNTED HALLOWEEN In the small town of Wardenclyffe on Halloween Night, two boys named Sonny (Jeremy Ray Taylor) and Sam (Caleel Harris) find a manuscript in an abandoned house that was previously owned by R. L. Stine called “Haunted Halloween.” When they open it, they release Slappy (Avery Lee Jones) who plans create his own family, with the help of his Halloween monster allies. Now Sonny and Sam, alongside Sonny’s sister, Sarah (Madison Iseman), must work to thwart Slappy’s plot before all is lost. Directed by Ari Sandel and written by Rob Lieber. It is based on the children’s book series of the same name by R. L. Stine and a sequel to the 2015 film Goosebumps. Read more / Trailer / Showing from 26 October

HALLOWEEN 2018 Jamie Lee Curtis returns to her iconic role as Laurie Strode, who comes to her final confrontation with Michael Myers, the masked figure who has haunted her since she narrowly escaped his killing spree on Halloween night four decades ago.Master of horror John Carpenter will executive produce and serve as creative consultant on this film, joining forces with cinema’s current leading producer of horror, Jason Blum (Get Out, Split, The Purge, Paranormal Activity).  Inspired by Carpenter’s classic, filmmakers David Gordon Green and Danny McBride crafted a story that carves a new path from the events in the landmark 1978 film, and Green also directs. Directed by David Gordon Green, screenplay by David Gordon Green & Danny McBride & Jeff Fradley. With Jamie Lee Curtis, Judy Greer, Will Patton, Nick Castle,Andi Matichak, Omar J. Dorsey  Feature: A confrontation that has been brewing for 40 years/ Trailer

THE HATE U GIVE Starr Carter is constantly switching between two worlds: the poor, mostly black, neighbourhood where she lives and the rich, mostly white, prep school she attends. The uneasy balance between these worlds is shattered when Starr witnesses the fatal shooting of her childhood best friend Khalil at the hands of a police officer.  Now, facing pressures from all sides of the community, Starr must find her voice and stand up for what’s right. It is based on the critically acclaimed New York Times bestseller by Angie Thomas and stars Amandla Stenberg as Starr, with Regina Hall, Russell Hornsby, Issa Rae, KJ Apa, Algee Smith, Sabrina Carpenter, Common and Anthony Mackie.directed by George Tillman Jr. and written by Tina Mabry and Audrey Wells. Read more /  Trailer

THE HOUSE WITH A CLOCK IN ITS WALLS In the tradition of Amblin classics where fantastical events occur in the most unexpected places, Jack Black and Cate Blanchett star in this magical adventure that tells the spine-tingling tale of 10-year-old Lewis (Owen Vaccaro) who goes to live with his uncle in a creaky old house with a mysterious tick-tocking heart. But his new town’s sleepy façade jolts to life with a secret world of warlocks and witches when Lewis accidentally awakens the dead. It is directed by Eli Roth and written by Eric Kripke. It is based on the novel of the same name. Read more / Trailer / Now showing

KANARIE is a coming-of-age musical drama set in South Africa in 1985, about a young boy who discovers how through hardship, camaraderie, first love, and the liberating freedom of music, the true self can be discovered. The film is directed by Christiaan Olwagen (Johhny Is Nie Dood Nie), from an original screenplay crafted by Olwagen and Musical Director Charl-Johan Lingenfelder. Read more / Trailer

LITTLE VAMPIRE The story of Rudolph, a thirteen year old vampire, whose clan is threatened by a notorious vampire hunter. He meets Tony, a mortal of the same age, who is fascinated by old castles, graveyards and – vampires. Tony helps Rudolph in an action and humor packed battle against their adversaries, and together they save Rudolph’s family and become friends.Based on a series of German books created in 1979 by Angela Sommer-Bodenburg about the friendship between a human boy and a vampire boy, The Little Vampire has already appeared as a cute if forgettable live action film in 2000. Read more / Trailer / Showing from 26 October

PAPILLON Based on the international best-selling autobiography, it follows the epic story of Henri “Papillon” Charrière (Charlie Hunnam), a safecracker from the Parisian underworld who is framed for murder and condemned to life in the notorious penal colony on Devil’s Island. Determined to regain his freedom, Papillon forms an unlikely alliance with quirky convicted counterfeiter Louis Dega (Rami Malek), who in exchange for protection, agrees to finance Papillon’s escape, ultimately resulting in a bond of lasting friendship. Directed by Michael Noer. It is a remake of the 1973 film of the same name starring Steve McQueen and Dustin Hoffman. The original film was written by Dalton Trumbo based on the best-selling autobiography by the French convict Henri Charrière. Trailer / Feature: A powerful portrait of the resilience of the human spirit

PEPPERMINT A vigilante action thriller directed by Pierre More which tells the story of young mother Riley North (Jennifer Garner) who awakens from a coma after her husband and daughter are killed in a brutal attack on the family. When the system frustratingly shields the murderers from justice, Riley sets out to transform herself from citizen to urban guerrilla. Channelling her frustration into personal motivation, she spends years in hiding honing her mind, body and spirit to become an unstoppable force – eluding the underworld, the LAPD and the FBI- as she methodically delivers her personal brand of justice.Read more / Trailer / Opens 26 October

SEARCHING Directed by Aneesh Chaganty and written by Chaganty and Sev Ohanian. Shot from the point-of-view of smartphones and computer screens, the film follows a father (John Cho) trying to find his missing 16-year-old daughter (Michelle La) with the help of a police detective (Debra Messing). Told entirely from a computer screen, David Kim discovers that his daughter, Margot, is missing. As he searches through her web history and interviews people who were supposedly close with her, he begins to learn that his daughter was not as perfect as she seemed.The film took just thirteen days to shoot. However, it took two years to make due to the prep, editing and animating. Feature: Searching – An Inspired New Form Of Storytelling In The Digital Age /   Trailer / Showing from 26 October

THOMAS & FRIENDS: BIG WORLD! BIG ADVENTURES!  When a mischievous little racing car called Ace passes through Sodor on his way around the world, Thomas is inspired to embark on his own ambitious trip. Travelling full steam ahead across five continents, Thomas discovers magnificent new sights and experiences exciting places and cultures. Along the way, he makes friends with an inspiring and fun Kenyan engine called Nia. With so much for Thomas to learn about the world, will Nia be successful in teaching him a lesson about the true meaning of friendship? Featuring a world of wonder, curiosity and amazing animal friends, join Thomas on an epic adventure, fulfilling his dream of seeing the world! Read more / Trailer / Now showing

THE TITAN In the near future, Earth’s resources are exhausted and humanity’s only hope of salvation lies in travelling to a distant planet. A military family is relocated so they can participate in an experiment into man’s genetic evolution in space, which will be vital to ensure that the human race survives the journey.Hot shot Air Force pilot, Rick Janssen (Sam Worthington), is chosen for a military experiment that will create a human being capable of surviving the harsh environments of Saturn’s moon, TITAN. The experiment is successful, turning Rick into a super-human, but it also creates deadly side-effects which threatens the life of Rick, his wife and family, and possibly humanity itself.Directed by Lennart Ruff. The screenplay was written by Max Hurwitz, with the story by Arash Amel.  Trailer / Read more / Showing from 19 October

VENOM One of Marvel’s most enigmatic, complex and badass characters comes to the big screen, starring Academy Award (R) nominated actor Tom Hardy as the lethal protector Venom, an investigative journalist and the host of an extraterrestrial symbiote that gives him “incredible powers”, along with a hideous alter-ego, which he calls as “Venom”. Director Ruben Fleischer took inspiration for the character’s portrayal from a quote in the comics: “You’re Eddie Brock. I’m the symbiote. Together we are Venom.”The Marvel Comics character Eddie Brock, a notable antagonist of Spider-Man, was first introduced in cinema in the 2007 film Spider-Man 3. Feature: A Story Of Two Antiheroes In One Body  / Trailer / Now Showing