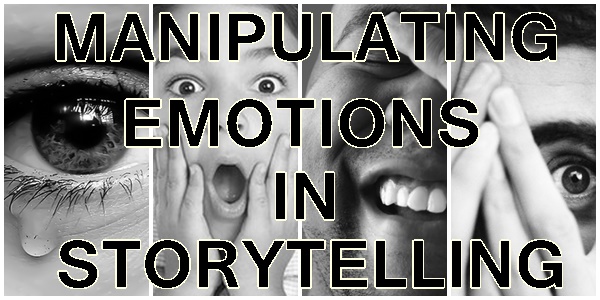 The storyteller is the puppet master of emotions.

As a writer you have the power to make your audience laugh whenever it pleases you, cause grown men to cry shamelessly, keep millions on the edge of reason, prevent couch junkies to switch channels, and grip people with fear.

The storyteller is the puppet master of emotions, the dictator of reason, and can make anything happen in a fictional reality where everything is possible and extreme gratification is your only goal, and the audience’s ultimate payoff and reward.

In storytelling, especially screenwriting, it is vital for the narrative to progress relentlessly and rapidly, and for what happens to flow fluidly and form a cohesive whole, so that the parts (scenes, sequences and acts) and the whole (story) are united as one.

The story must be well-paced and flow rhythmically, seducing the senses and evoking emotions, ranging from total delight to absolute fear.

The storyteller uses two tools to be the ultimate puppet master, setting Turning Points and Transitional Links into action, cleverly manipulating emotions and drawing an unsuspecting audience into a web of mystery and wonder.

The story becomes a tapestry of mixed emotions, and a melting pot of symbolism and subtext, allowing us to feel what’s happening, and experience the heartbeat of each moment, taking a meaningful journey on the roller coaster of dramatic or comedic action without interruptions or getting lost in translation.

This is the storyteller using ultimate power to manipulate emotions and have full control over both the characters and their captive audience.

The Art Of Composition forms an integral part of our The Write Journey course.

Composition – the ordering and linking of scenes

A story, even when expressing chaos, must be unified. Unity is critical. Within this unity we must induce as much variety as possible. You don’t want to hit the same note over and over again, so that every scene sounds like every other.

The key to varying repetitious scenes is research. Superficial knowledge leads to a bland, monotonous telling.

The audience has two desires:

The writer must alternate between tension and relaxation. Once you have written a scenes filled with suspense, you have to reduce the tension, and switch to comedy or romance, a counter pointing mood that lowers the intensity so that the audience can catch its breath and reach for more energy. After retarding the pace, you build the progression in intensity and meaning.

In a well told story the progression of scenes and sequences accelerates pace. The writer takes advantage of rhythm and tempo to progressively shorten scenes while the activity in them becomes more and more brisk. You have to control rhythm and tempo. If you don’t, the film editor will.

How will the audience sense when a story genuinely progresses?

There are six Ironic story patterns:

Take a look at The Impact Of Turning Points.

For more information on The Write Journey, contact us