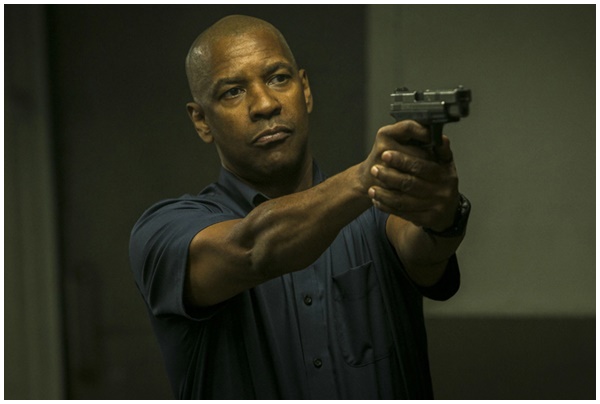 If you have a problem and there is nowhere else to turn, the mysterious and elusive Robert McCall will deliver the vigilante justice you seek.

“I think people enjoy the idea, the myth, that a guy like Robert McCall exists.  McCall is a kind of dark angel – the angel we all wish would come down and serve justice to people who deserve it,” says Antoine Fuqua, who returns to re-team with Denzel Washington for a fourth time in The Equalizer 2, following their successful collaborations on Training Day, The Magnificent Seven, and the first Equalizer film.  “He’s found his purpose, becoming a force for justice.  Until now, that has been for strangers.  But when someone close to McCall is killed, he seeks vengeance for his friend – and for himself.”

For Washington, the appeal of McCall is simple: “He’s hiding in plain sight, an everyman,” says the two-time Oscar®-winning actor.  This time around, he’s moved on; instead of selling you home improvement goods, he’s your Lyft driver – but the avenging angel who has fought for justice for strangers finds himself fighting a more personal battle than ever before.  “When we first see McCall, he’s trying to help other people who can’t help themselves, but it becomes very personal.”

“With Denzel Washington, there’s no single greatest strength – he brings everything as an actor,” says Antoine Fuqua.   “I’m always fascinated when I’m watching Denzel do his work.  He just constantly ups himself, he’s always looking to be better.  You’d think someone like him would relax a little bit – he’s Denzel Washington!  But he doesn’t behave like that.  Denzel will be the first person to tell you: ‘I’m not a movie star; I’m an actor.’  He challenges me; he’s inspiring.”

The remarkable thing about The Equalizer 2 is the 2: it is the first sequel of Denzel Washington’s career.  “I’ve been in this business for forty years and I’ve never done anything a second time,” he says. “The excitement for me comes when I do something new.  When it came to this screenplay, the new territory was the relationship with Susan, Melissa Leo’s character, and the relationship with the young boy, Miles, played by Ashton Sanders.  This film is more of a personal journey for McCall because it is about what happens to people that he’s allowed into his life.  He was a man who wasn’t going to allow anyone in his life, and now, when he opens up to a couple people, it’s not good.”

For Fuqua and the producers of the film, giving McCall that personal stake in his battles became the driving force.  “With the first film, I wasn’t surprised that people showed up to see Denzel – but I was surprised at how they responded to the idea of justice more than anything else in the film,” says Fuqua.  “I think people are feeling like outsiders who have no control over their lives, and we all wish we had a McCall who could swoop in and put us on the right path – not necessarily solve all our problems, but give us a chance to move in the right direction.”

“The Equalizer was an origin story,” says producer Jason Blumenthal.  “Robert McCall had successfully taken himself off the grid and was willing to live that existence until he could no longer turn a blind eye to the injustices around him.”

“But we know that the past doesn’t stay in the past,” says producer Todd Black, picking up the thought. “If the first film was about a man finding the purpose that will guide the rest of his life, this film is about that man applying that purpose, and, seeking revenge, and coming to terms with his past.  When we started talking about The Equalizer 2, we had the idea to explore who Robert McCall was – his background. Fortunately, our writer, Richard Wenk, came up with a very good plot that was organic for this next chapter.”

“When I first read the script and I read hurricane, I thought, really?  How am I going to pull that one off?” Fuqua laughs.

Screenwriter Richard Wenk conceived that the third act of the film will take place during a Category 5 hurricane.  He says, “In the first movie, we’re in Home Mart with four walls.  For this one, we wanted it to be bigger, so the idea came about that our hero would be going to his hometown during a hurricane.  And since everyone has been evacuated, there would be no collateral damage with what McCall plans to do his targets.”

“Oddly, one of the things that the audiences loved about the first movie was that there was a lot of mystery to it, so I always planned that we would get more personal with McCall when it came to the second one,” says Wenk.

In The Equalizer 2, many of McCall’s secrets are revealed – his training, his skills, his wife, his relationship with Susan Plummer.  “McCall is still struggling with his past, his path, the death of his wife, with what he used to be,” says Fuqua.  “He finds himself on a path that leads him back home, and as the saying goes, the path home is sometimes the hardest.  And sometimes, you literally have to go through a storm to find peace.”

“But Robert McCall is also very similar to Denzel as a person,” Fuqua continues.  “Denzel wouldn’t want me to talk about it, because he doesn’t want to take credit for it, but he does a lot for people. He taught me something he learned from Nelson Mandela: a shepherd leads from behind – not from the front.  He takes that idea and quietly helps people along the way.  I think that was important to him to express in Robert McCall.”

One way this is expressed is in McCall’s choice of reading material – the character reads author Ta-nehisi Coates’ Between the World and Me and suggests that Miles (played by Ashton Sanders), a young man who lives in his building, do the same.  It was a choice that was inspired by real life, according to screenwriter Richard Wenk.  “Denzel gave me the book while we were going through the script together,” he says. “I read the book and then discussed its importance with Denzel. We decided to replace the original book I had his character reading with Between the World and Me. It’s a seminal work and it helped infuse Denzel’s character with a social conscience that was played out between his and Ashton’s character.”

Wenk, who wrote for Washington and Fuqua on both The Equalizer and The Magnificent Seven, says, “I think with talents as great as these two, you push yourself a little harder to be more creative, more visual and smarter.  You want to give Antoine, whose visual style is second to none, a canvas to work with that is not like any other so that he can elevate that.  And with Denzel, who is one of the great actors of our generation, you take that into account when you’re writing scenes with dialogue and perspectives.”

To bring the audience into the world of Robert McCall, Fuqua employs what he calls “Equalizer-vision.”  “His heart slows down, his pupil dilates, more light comes in an his vision gets sharper.  He becomes more aware of everything in the room.  Violence is a comfort zone for him,” says Fuqua.  “He is a man who can instantly assess a room – he knows your weak spot, he knows where the weapons are.  And everything is a weapon – a pen, a piece of paper, a clipboard.”

The Equalizer 2, Fuqua says, was an opportunity to explore what life must be like for such a man.  “If violence is a comfort zone, who do you balance that?” he says.  “If you release men of violence into the real world, who is there to help them?  For McCall, that’s Susan Plummer – she understands him, she brings him back from the darkness, she gives him everything he needs to function.  He loves her – the only thing in the world he loves, outside of his wife.  So her death is very personal to him.”