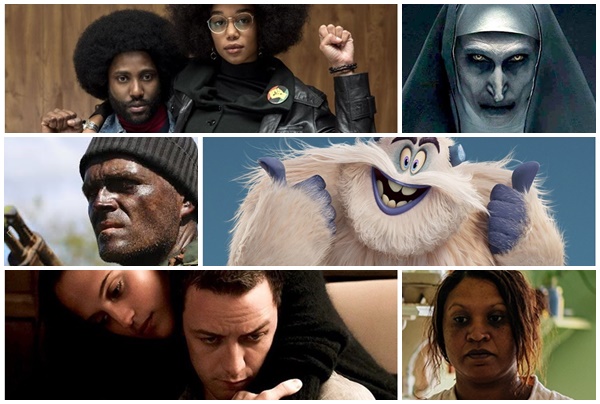 There are 3 new South African films and 15 International Films Released In South Africa during September 2018.

A SIMPLE FAVOR This mystery thriller centers on three small-town characters: it centres around Stephanie (Anna Kendrick), a mommy vlogger who seeks to uncover the truth behind her best friend Emily’s (Blake Lively) sudden disappearance from their small town. Stephanie is joined by Emily’s husband Sean (Henry Golding) in this stylish thriller filled with twists and betrayals, secrets and revelations, love and loyalty, murder and revenge. Directed by Paul Feig from a screenplay by Feig and Jessica Sharzer. It is an adaptation of Darcey Bell’s novel of the same name. Read more / Trailer /  Opens 28 September

BILLIONAIRE BOYS CLUB It tells the true crime story of the ambitious entrepreneur and financial whiz kid Joe Hunt (Ansel Elgort), whose company of affluent young men from Beverly Hills, the BBC, grew into a Ponzi Scheme that turned homicidal in the Summer of 1984. Directed by James Cox. Read more / Trailer / Now showing

BLACKKKLANSMAN From visionary filmmaker Spike Lee comes the incredible true story of an American hero. It’s the early 1970s, and Ron Stallworth (John David Washington) is the first African-American detective to serve in the Colorado Springs Police Department. Determined to make a name for himself, Stallworth bravely sets out on a dangerous mission: infiltrate and expose the Ku Klux Klan. Feature: Spike Lee’s Latest Expression of the facts of American Life  / Trailer / Now showing

THE CHILDREN ACT Fiona Maye (Emma Thompson) is an eminent High Court judge in London presiding with wisdom and compassion over ethically complex cases of family law. But she has paid a heavy personal price for her workload, and her marriage to American professor Jack (Stanley Tucci) is at a breaking point. In this moment of personal crisis, Fiona is asked to rule on the case of Adam (Fionn Whitehead), a brilliant boy who is refusing the blood transfusion that will save his life. Adam is three months from his 18th birthday and still legally a child. Should Fiona force him to live? Fiona visits Adam in the hospital and their meeting has a profound emotional impact on them both, stirring strong new emotions in the boy and long-buried feelings in her. Directed by Richard Eyre. Read more / Trailer / Now showing

ELLEN: THE ELLEN PAKKIES STORY  The heart-wrenching story of Ellen Pakkies caught the attention of people around the globe when she was accused of murdering her drug-addicted son, Abie, in 2007.   Interview with screenwriter Amy Jeptha / Trailer / Now showing

GOTTI follows infamous crime boss John Gotti’s (John Travolta) rise to become the “Teflon Don” of the Gambino Crime Family in New York City. Spanning three decades and recounted by his son John Jr. (Spencer Rocco Lofranco), GOTTI examines Gotti’s tumultuous life as he and his wife (Kelly Preston) attempt to hold the family together amongst tragedy and multiple prison sentences.Raised on the streets of New York, young John Gotti found his way into the Gambino crime family, eventually having the boss removed and becoming head of the powerful family. His wife asked only one thing from John: to never expose their children to his profession. But he broke the vow, and John Jr. took his place as his father’s Capo.Directed by Kevin Connolly and written by Lem Dobbs and Leo Rossi. Read more / Trailer / Now showing

JOHNNY ENGLISH 3 is the third installment of the Johnny English comedy series, with Rowan Atkinson returning as the much loved accidental secret agent. The new adventure begins when a cyber-attack reveals the identity of all active undercover agents in Britain, leaving Johnny English as the secret service’s last hope. Called out of retirement, English dives head first into action with the mission to find the mastermind hacker. As a man with few skills and analogue methods, Johnny English must overcome the challenges of modern technology to make this mission a success. Directed by David Kerr. Written by William Davies. Read more / Trailer / Now showing

LEAVE NO TRACE Will (Ben Foster) and his teenage daughter, Tom (Thomasin Harcourt McKenzie), have lived off the grid for years in the forests of Portland, Oregon. When their idyllic life is shattered, both are put into social services. After clashing with their new surroundings, Will and Tom set off on a harrowing journey back to their wild homeland. The film is directed by Debra Granik from a script adapted by Granik and Anne Rosellini. Read more / Trailer / Now showing

MILE 22 An elite American intelligence officer, aided by a top-secret tactical command unit, tries to smuggle a mysterious police officer with sensitive information out of the country.

THE NUN When a young nun at a cloistered abbey in Romania takes her own life, a priest with a haunted past and a novitiate on the threshold of her final vows are sent by the Vatican to investigate.  Together they uncover the order’s unholy secret.  Risking not only their lives but their faith and their very souls, they confront a malevolent force in the form of the same demonic nun that first terrorized audiences in “The Conjuring 2,” as the abbey becomes a horrific battleground between the living and the damned. Directed by Corin Hardy, starring Demian Bichir, Taissa Farmiga, Jonas Bloquet, Charlotte Hope.  Feature:  The Nun Explores another dark corner of the Conjuring Universe / Interview with director Carin Hardy /  Trailer / Now showing

THE PREDATOR (3D and IMAX) Soldiers join forces to battle a vicious extra-terrestrial that hunts humans in a suburban neighbourhood. From the outer reaches of space to the backwoods of southern Georgia, the hunt comes home in Shane Black’s explosive reinvention of the Predator series. Now, the universe’s most lethal hunters are stronger, smarter and deadlier than ever before. And only a ragtag crew of ex-soldiers and an evolutionary biology professor can prevent the end of the human race.Directed by Shane Black, starring  Boyd Holbrook, Trevante Rhodes, Jacob Tremblay, Keegan-Michael Key, Olivia Munn. Read more / Trailer /Now Showing

THE RECCE  The story of how the South African Defence Force declared young Recce Henk Viljoen dead behind enemy lines and how it’s up to him alone to use everything he’s learnt and knows to make it back to his family. Add to this the fact that the enemy is hot on his trail, it’s clear that this is no ordinary story of survival across the treacherous war torn African landscape. This is also one of the first films in decades to explore issues regarding not only the Border War, but also the pain and suffering families had to endure during and after the conflict that lasted almost 20 years. Written and directed by Johannes Ferdinand van Zyl, The Recce script came out of his personal connection to the story, “Having grown up with family members that were sent to the border war, I have a fascination with that era in our history.” The cast brings together some of the biggest names in the South African acting fraternity, as well as some new talents to watch. This includes Marius Weyers (The Gods Must be Crazy, Paljas, Die Wonderwerker), Albert Maritz (Invictus, In ‘n man soos my pa, Modder en Bloed), Greg Kriek (Samson, Momentum), Grant Swanby (Beyond the River, Invictus, Troy), Christia Visser (Tess, Hollywood in my Huis), Maurice Carpede (Chappie) and Sonni Chidiebere (District 9, Blood Diamond, Hotel Rwanda). Read more / Trailer / Showing from 28 September

SGT STUBBY: AN ALL AMERICAN HERO A computer-animated film based on the incredible, true story of the bond between a solider and a stray dog in WWI.With World War I looming, Robert Conroy, a young Army private, adopts a stray, stump-tailed terrier. Conroy names his new friend Stubby and gives him a home, a family, and a chance to embark on the adventure that would define a century. The two quickly find themselves in the trenches of France and on the path to history. French soldier Gaston Baptiste befriends the man and dog and accompanies them along their epic journey through harsh conditions and incredible acts of courage. Read more / Trailer /Now Showing

SMALLFOOT An animated adventure for all ages, with original music and an all-star cast, “Smallfoot” turns the Bigfoot legend upside down when a bright young Yeti finds something he thought didn’t exist—a human. News of this “smallfoot” throws the simple Yeti community into an uproar over what else might be out there in the big world beyond their snowy village, in an all new story about friendship, courage and the joy of discovery. Voices of Channing Tatum, James Corden, Zendaya, Common, LeBron James, Gina Rodriguez. Directed by Karey Kirkpatrick. Trailer / Opens 28 September

SUBMERGENCE James (James McAvoy) is a British agent under the cover of a water engineer, while Danny (Alicia Vikander) is a bio-mathematician working on a deep-sea diving project to explore the origin of life on our planet. On a chance encounter in a remote resort in Normandy where they both prepare for their respective missions, they fall rapidly, and unexpectedly, into each other’s arms and a deliriously wild love affair develops, even though their jobs are destined to separate them. Danny sets off on a perilous quest to dive to the bottom of the ocean. James’s assignment takes him to Somalia, where he is sucked into a geopolitical vortex that puts him in grave danger. Both characters are subject to different kinds of isolation as they pine for each other; their determination to reconnect becomes as much an existential journey as a love story. Directed by Wim Wenders, based on the novel of same name by J. M. Ledgard. Read more / Trailer / Now showing

TABLE MANNERS In South African filmmaker Leli Maki’s comedy a wife and mother finds solace and hope in cooking, learning that all she needs is life’s three courses – family, food and love. Megan (Diaan Lawrenson) loses everything when her husband, Lloyd (Neels Van Jaarsveld), gets arrested for tax fraud and has to rebuild herself by rediscovering her love for cooking and the flavors of life. With the help of her best friend Lindiwe (Renate Stuurman), she learns that the path back home begins with realizing that she is enough and all she needs is her family, food and love. Life’s 3 courses made easy.  Showing from 28 Sept.