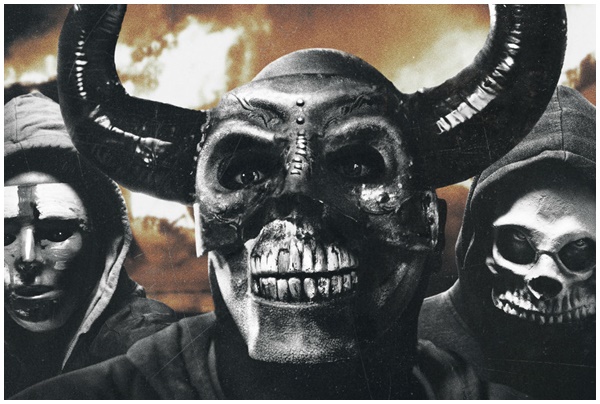 The First Purge is a response to audiences asking how all this madness began, as well as a chance to understand what an overly oppressive government could do to its people.

It’s been five years since the world first experienced the provocative concept of The Purge, when, for one night during the year, all crime—including murder—became legal. Now, welcome to the movement that began as a simple experiment: The First Purge.

“This time we’re going to take you back to how it all began with how an isolated social experiment turned into something unimaginable,” says director Gerard McMurray.

Coming off the most successful film in the series, creator James DeMonaco (writer/director of The Purge, The Purge: Anarchy and The Purge: Election Year) pens the screenplay for The First Purge, which is directed by Gerard Mcmurray (Burning Sands).

To push the crime rate below one percent for the rest of the year, the New Founding Fathers of America (NFFA) tests a radical sociological theory that vents aggression for one night in one isolated community.  But when the violence of oppressors meets the rage of the marginalized, the contagion will explode from the trial-city borders and spread across the nation.

Now that the NFFA has taken charge of the American political landscape, change—no matter how draconian—is assuredly coming.

Electrifying the culture with its dystopic premise, the home-invasion thriller The Purge spawned a franchise that explored the madness that seeps into our everyday lives.

Unleashed in the streets in 2014’s electric The Purge Anarchy, and explored through our electorate in 2016’s political conspiracy The Purge: Election Year, each film seemed to be a harbinger of just how dangerous and brutal we could become.

With each subsequent Purge sparking debates about our potential future, audiences became engrossed in the dystopic world imagined by the New Founding Fathers of America.  As in the most powerful of entertainment, this premise and promise reminded us that there is a thin line between a speculative future and the harsh reality of the society in which we could come to live.

In the previous installments, moviegoers were duly shocked by the deceptively simple premise brought to life by writer/director James DeMonaco, who drew his inspiration from prescient works such as Shirley Jackson’s “The Lottery” and Richard Connell’s “The Most Dangerous Game,” as well the landmark A Clockwork Orange and American Psycho.  For the filmmaker, politicians who need to “sell fear” inspired so much of this dark universe.

The films of The Purge series explore how society can tear itself apart when a corrupt government encourages us to take the law into our own hands and prey upon the poorest of our society.  As citizens are encouraged to share in that vigilante mentality, not only does the rule of law break down, but so do the basic tenants of humanity.

When discussing the director who should take the reins for The First Purge, DeMonaco, who created the first three films, and his fellow producers—including Blumhouse Films’ Jason Blum, alongside Platinum Dunes’ Michael Bay, Brad Fuller and Andrew Form, as well as DeMonaco’s production partner, Sébastien K. Lemercier—were drawn to Gerard McMurray, known for his visually stunning inaugural cinematic work.  DeMonaco had written this tale to serve as prequel to his other films, and felt it would be interesting and timely to set the events in 2018.

Blum, who has carved out a spectacular industry with films that provide social commentary alongside terror, walks us through McMurray’s welcome to this chapter of the series: “When I saw Gerard’s Burning Sands, I loved it.  I sent it to James and Sébastien, our partners on all the Purge movies, and they really liked it as well.  When we met with Gerard, we were impressed with his vision for the movie.  He did a terrific job.”

Just as DeMonaco appreciated McMurray’s ability to create authentic worlds, Lemercier felt that the director had the ability to tell a story that was equal parts theatrical entertainment and warning shot for society.  The producer reflects that, in the history of mankind, those with some of the best of motivations for us had their ideas bastardized.  So, too, was the thinking behind The Architect of The Purge.  “Hell is paved with good intentions and I think that’s really what it is,” says the producer.  “When Karl Marx wrote ‘Capital,’ he didn’t expect billions of people to die of hunger in China and the Soviet Union.  He wanted to make the world a better place.  It didn’t work out that way at all.”

What ultimately attracted McMurray to the work was his interest in exploring a massive conspiracy…one that’s coming from the very top of those elected leaders of the world DeMonaco built.  For the director, DeMonaco’s storytelling, as well as a passion for the series and chance to be a part of Blumhouse and Platinum Dunes, would draw him deep into this universe.  Like the rest of his production team, he looked around him and wondered, “What if we ever got to this place in society?”

He also appreciated that DeMonaco and his fellow producers were keen to bring a filmmaker onto this chapter—set in our modern world—who could bring life and a voice to the all-too-terrifying stories happening to today’s African-American inner-city community.

(L to R) MO MCRAE as 7×7, JERMEL HOWARD as Lorenzo, Y’LAN NOEL as Dmitri, director GERARD MCMURRAY and SIYA as Blaise on the set of “The First Purge.” Behind every tradition lies a revolution. This Independence Day, witness the rise of our country’s 12 hours of annual lawlessness. Welcome to the movement that began as a simple experiment: “The First Purge.”

McMurray offers that the premise behind The First Purge spoke to him on multiple levels.  As it does for many, this genre lets us wrestle with the evils of the real world.  “Horror movies take what seems too scary in real life and turn ideas into a boogieman—a monster, a metaphor that we can confront and maybe conquer,” reflects the director.  “The Purge franchise has sustained because it has something to say about the world we’re living in.  This time we’re going to take you back to how it all began with how an isolated social experiment turned into something unimaginable.”

The worst and most terrifying of those monsters is mankind itself.  DeMonaco created this series as an allegory, asking audiences: “What if we ended up in this kind of world?  What if our government was trying to force us to tear each other apart and destroy the most vulnerable in society?  Would I join in as a participant, or would I fight the machine itself?”  McMurray is emphatic: We’re fighting the machine.

When he reflects on the urban world of The First Purge, the director notes eerie similarities to elements of his life growing up in the 7th Ward of New Orleans, Louisiana.  Raised by a father who taught him to stand up always for others and be a voice for justice, the filmmaker loved that the characters to whom he was entrusted will not back down.  Ever.

He also has a deep desire to tell stories about people who have been all-too-long relegated to supporting players.  With the burgeoning renaissance in cinema that speaks to multifaceted aspects of the Black experience—from Get Out and Moonlight to Straight Outta Compton and Black Panther—there’s a deep hunger by underrepresented audiences to hear their voices and see their stories on screen…in all genres.

A longtime fan of horror, McMurray felt this was the prime opportunity to make a unique film that underscored under-representation with episodes of systematic repression.  Particularly interesting was the idea of telling the tale of The First Purge as a uniquely personal one.  DeMonaco had woven a story of primarily African-American and Latino characters who were all interconnected in their Staten Island community.  With ex-lovers Dmitri and Lex forced to come together during their city’s time of need, they had to put aside heartbreak and champion one another.

It would be unnatural if our id wasn’t tempted by the idea of one day of lawlessness that permit the worst of our impulses.  “I think we are infatuated with the idea that you can do whatever you want to do for 12 hours with no repercussions,” offers McMurray.  “We ask ourselves, ‘What would you do on Purge night?’  That said, we’ve never known or understood how the whole thing got started.”

Still, the filmmaker had lived through the devastation of 2005’s Hurricane Katrina and knew first-hand what it felt like to be abandoned by his own government…as well as for our people to experience hopelessness just outside their doors.

Remembering what it felt like to experience how the government can treat our poorest citizens, McMurray dug into the idea of politicians deciding that it was time to implement this dark social experiment.  “I wondered, like all fans of the series, how it all began and how those people reacted.  James’ story is more intimate than the previous chapters; it’s more personal, and we get to see the first episode when someone’s purging for the first time on…and it goes viral.”

Yes, this Purge is definitely more political than the previous chapters, admits the director proudly.  “Coming in as a filmmaker of color, I really wanted to address the political issues head on.  I think some issues in society that we’re facing now speaks to The Purge.  By grounding this film in reality, I knew I could tell a more nuanced story of this Purge and get audiences to understand why it all happened from the beginning and what people did—as well as why the idea of this is so close to what we are right now as a society.  I allowed myself to hone in and tell a story that was more intimate for audiences…while also giving them big action-horror pieces along with it.”

One of the reasons that Platinum Dunes keeps returning to this series is that the producers feel the genre allow us permission to look deep within ourselves in a way that films in other genres cannot.  Producer Fuller, whose team just wrapped the release of the juggernaut A Quiet Place, reflects on The Purge series’ place in this canon: “The First Purge is a response to audiences asking how all this madness began, as well as a chance to understand what an overly oppressive government could do to its people.  The patriots in our story are doing everything in their power to survive an attack on their city, and you’ll feel like you’ve survived Purge night alongside the ones who make it out.”

Production wrapped, McMurray reflects upon his experience with the production in which he infused authentic characters who run the gamut of emotions during the long night: “Making The First Purge was such a great experience.  I was able to do a lot of fun things—create action, suspense and drama; showing what reality could be is pretty sobering.  It’s been a genre-bending, roller-coaster thrill ride, and we’re hopefully giving audiences everything they want out of a movie.”

Producer Blum concludes that what led the people in this world down this path is the power of marketing, and how we must stay mindful of and vigilant toward the messenger: “The reason that they agreed to it is because the Founding Fathers are very good marketers.  They sold this notion that Purging is good for you, and Purging is going to help society whether you’re rich or poor.  It’s a good thing that will be fun.  A lot of people bought into that message, which is a sad reflection on society.  But also it shows how powerful leadership can sell an idea, which is even worse.”