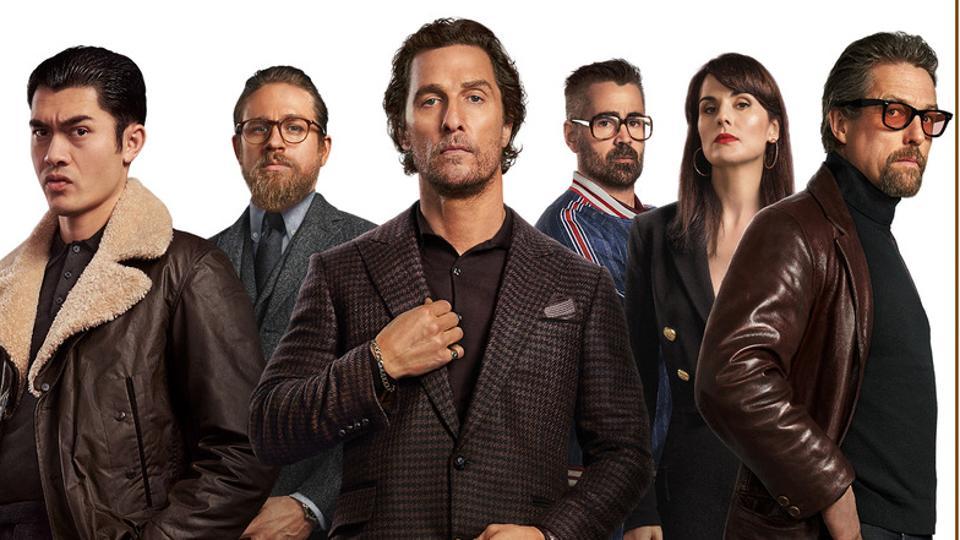 Writer-director Guy Ritchie came up with the idea for The Gentlemen almost a decade ago. After he and producer Ivan Atkinson considered turning the project into a television series, Ritchie decided to return to his original conception .

He explains the film’s origins as a work entitled ‘Toff Guys’ – a reference to the British slang for someone from an aristocratic background, and who exudes an air of superiority.

“It all spoke to my interest in exploring the meeting of disparate polarities in the English and American class systems,” says Richie. “The characters have reached an age where they are magnetically drawn to the finer things in life and have become gentrified in their rather ungentrified business. They are, at their core, hard-boiled and have worked their way up the urban ladder. Now, they’re caught between two worlds, one of which is aspirational. And the things they enjoy are now out of sync with the business they’re in.”

The title points to their aspirations, but as Ritchie admits, “There aren’t a lot of gentlemen in this equation.”

The story follows American expat Mickey Pearson (Matthew McConaughey), who has built a highly profitable marijuana empire in London. When word gets out that he’s looking to cash out of the business, a host of colorful, if entirely illegitimate figures scheme, bribe and blackmail their way to try and steal Mickey’s domain out from under him.

The film also stars Charlie Hunnam, Henry Golding, Michelle Dockery, Jeremy Strong, with Colin Farrell, and Hugh Grant – all under the direction of master filmmaker Guy Ritchie, who returns to the genre and type of characters to which he gave an indelible and unique flavor in films such as Sherlock Holmes, Lock, Stock and Two Smoking Barrels, and Snatch.

According to Matthew McConaughey, a Guy Ritchie movie is made up of “language, punch, humor, sleight of hand, chin up, and double-dare-ya. Every character in Guy’s movies has a specific and unforgettable identity; you want to be with them when you’re with them. Nobody is boring.”

“No one has captured that gangster tone like Guy, who really understands charm and character,” adds producer Ivan Atkinson, who also co-wrote the story with Ritchie and Marn Davies. “You never forget Guy’s characters in those films, and it’s great to experience that mix of action, comedy, and fun.”

“Guy wanted to venture back to his roots for this project, and the cast he pulled together was phenomenal,” says producer Bill Block. I look at it as somewhat of a tribute to his past, with relevant themes and similar characters having evolved over the last two decades.”

A key piece to the success of this ensemble is how Ritchie cast many of the actors in roles that notably contrast with the types of characters they usually play. “There’s no one in this group of A-listers you look at and think, ‘Of course they’re playing XX (character),’” says Block. “It adds to the overall freshness and unexpected twists of the film. Guy’s characters reflect their environment, and in a crime-based world one must be seamlessly quick-witted, scrappy and resilient.”

Ritchie’s central protagonist is Mickey, whose attraction to his increasingly upper-crust way of life leads him to seek an exit from his chosen profession as a marijuana kingpin. The role was originally conceived for a British actor, but the filmmakers eventually decided that making the character American created exciting and unexpected directions for Mickey. “It makes this a unique British gangster film about an American living in London trying to sell his business to another American, Matthew, played by Jeremy Strong,” says Atkinson.

Upon reading the script, Matthew McConaughey came aboard and immediately had some ideas for the character. “Mickey is an American selling England to the English,” the Academy Award winning actor summarizes. “As we know, sometimes it takes someone’s romanticized point of view to show value to the things we have around us, and Mickey does just that. He moved to London twenty years earlier, is Oxford educated, and has infiltrated the upper echelons of the aristocracy – the toffs. He started developing marijuana farms with the idea that there are thousands of estates in the UK, and Mickey would rent their properties for a million pounds a year and build ‘skunk’ farms underneath them. Mickey’s toff partners didn’t have to do anything; he just needed their land and they wouldn’t even know what was happening. Mickey’s business grew to become an empire.”

“Yes, sometimes the nuance of British culture can be lost on the British,” Atkinson claims. “So, when an American comes into this world with a fresh eye, that’s a big advantage.”

One of the major draws for the cast was to be a part of a world that is unique to Ritchie’s style, imagination, and poetic ear for rough-and-tumble dialogue and action.

Jeremy Strong points to the filmmaker’s collaborative nature as being equally enticing. “Guy’s language is poetic: it has the music and acuity of a play. It was like doing Oscar Wilde or Noël Coward, there’s a theatrical quality,” he relates. “There’s something elevated and high-camp about it. Once you discover that tonal center it’s very freeing and fun. We spent an hour or two each day rewriting, which is another part of Guy’s technique. He gave me permission to do something quite theatrical and a bit left of center from what was on the page. It was a process of discovery.”

“Guy is an auteur in that everything on a Guy Ritchie film set must go through the Guy Ritchie filter, which is very specific,” Hunnam points out. “There’s such a purity, singularity and clarity of focus in his vision. You just surrender to it.”

Adds Farrell: “His films have a riff, just like jazz, with everyone bouncing off each other and all these different notes being hit, simultaneously.”

“There are a lot of long speeches in the film, and I spent months learning Fletcher’s,” Grant recalls. “I went on a skiing holiday with my children and didn’t ski because I just walked up and down the lanes, all day, learning lines. But Guy’s dialogue is certainly meaty and very brave. The challenge is to make that live and breathe and be your own, and I quite enjoyed doing that.”

Ritchie never stopped fine-tuning the script, often rewriting a scene on the day it was to be filmed – a process he undergoes on all his films. McConaughey was impressed by the filmmaker’s insistence on getting it right, and the process it took getting it there. “Guy and I had more conversations than I’ve had on any other film. He really comes alive in continually reworking the script. It’s delicious dialogue in a different meter than any I’ve ever played.”

“You come prepared for each day, anything can change so you have to be prepared for that, but it’s extremely rewarding,” says Dockery.  “It’s a really collaborative process; Guy’s very much up for suggestions and always finding the humor in everything. There’s a snappiness and bite and even poetry in Guy’s films. There’s a rhythm to his writing that feels quite musical.”

Ritchie’s approach also includes a unique rehearsal process he calls the “black box.” Eschewing the traditional table read, where the actors assemble around a large table and read their dialogue, Ritchie and his cast instead shoot the entire script, guerilla filmmaking style, over a twelve-hour period. “It allows us to be completely clear about the film, boiling down three months of the production to come in an afternoon. It’s ‘Here’s the film before we even make it,’ Atkinson explains.

“It’s like you’re doing a quick stage play,” says McConaughey. “Guy gets a lot of important information from actually shooting the rehearsal. It allows him to see what the dynamic is going to be.”

The black box rehearsal was an early step in the process of bringing The Gentlemen to the big screen, a journey that culminates with its global release beginning January 2020. “I hope audiences have a great time and say, ‘I haven’t seen that before,’ which is what I remember saying after I had watched Guy’s Snatched,” Atkinson says. “I also hope they want to talk about what they’ve seen. The Gentlemen offers more worlds within a film than Guy’s ever done before.”

Block offers, “From the beginning, our faith in Guy to cultivate this unique take on crime comedy into a sophisticated and extraordinarily compelling film was limitless, and we’re very much looking forward to sharing this with the world.”

For Ritchie, the film represents an opportunity to examine class culture in both the UK and the U.S within the context of the amazing cast he’s assembled and a return to his distinct style – along with some twists and turns. “I think people are going to have an entertaining and quirky ride with this one,” he states, adding, “I also enjoyed dealing with the different polarities of culture and sub-culture, the upper and lower echelons of society – and I hope audiences dial in to that, too.”

Guy Ritchie (Writer/Director/Producer) is a pioneering, award-winning movie director.  Having started out directing music videos in the 1990’s, Guy made the short film The Hard Case in 1995.  This became the inspiration for his debut movie, the internationally acclaimed, BAFTA winning Lock, Stock & Two Smoking Barrels.  In 1998 he followed up with the smash hit Snatch and the cult hits Revolver and Rock ‘n Rolla.

In 2009 Ritchie switched to directing Hollywood blockbusters for Warner Brothers with Sherlock Holmes and Sherlock Holmes: A Game of Shadows, followed by Man from U.N.C.L.E. and King Arthur: Legend of the Sword.

In 2019 Ritchie applied his innovative and energetic directorial style to Disney’s Aladdin, which grossed over $1BN worldwide.  Hot on the heels of this success, he returned to his indie roots writing and directing the British Gangster action comedy The Gentlemen and the as yet Untitled revenge-based action thriller, which reunites him once more with long term collaborator Jason Statham.

Ivan Atkinson (Story by/Producer) started his career working in film production on Sherlock Holmes: A Game of Shadows, Man from U.N.C.L.E., and King Arthur: Legend of the Sword. He received his first Producer credit on the $1BN grossing, international smash hit Aladdin for Disney.  This success was followed by co-writing and producing The Gentlemen for Miramax.  Ivan is currently producing the as yet Untitled Guy Ritchie/Jason Statham revenge -based action thriller, with a slate of other Film and TV projects in development.

Marn Davies (Story By) directed the award-winning short film What Stephen Lawrence Has Taught Us in 1999 whilst still studying at Boumemouth University.  He received his first broadcast TV credit directing “The National 5-a-Side Championships” for Sky Sports in 2001. In 2005 Marn co-directed the BBC One “Live 8” documentaries, and edited a Golden Lion winning Adidas campaign in 2008.  From here, Marn worked for Guy Ritchie, co-directing documentaries on “The Ego.”  Most recently Marn co-wrote the Miramax feature film The Gentlemen and currently works across a number of Film and TV projects at Toff Guy Films.