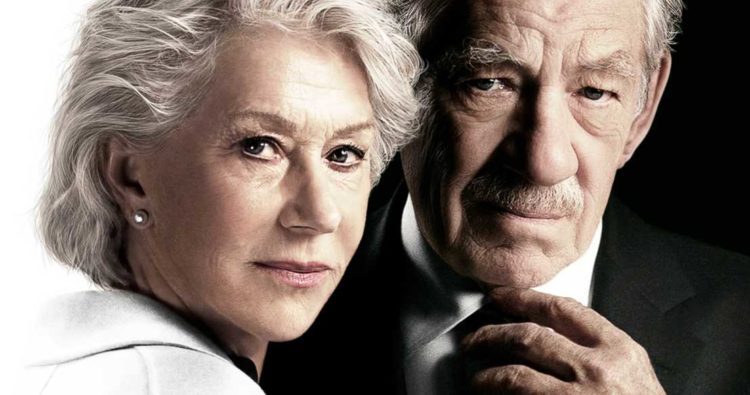 The Good Liar is an intriguing look at the dark side of human nature but often with a glimmer of macabre humor,” says director and producer Bill Condon of this gripping tale where so little is what it seems to be.

“It’s a thriller with a Hitchcockian feel, weaving in elements of mystery, crime and a human drama.  And at its heart are two beautifully complex characters played by two of the greatest actors of all time, at the top of their form, who can keep you guessing like a classic whodunnit till the very end.  It’s all wickedly fun,” says Condon, who directs from a screenplay by Jeffrey Hatcher, based on the widely acclaimed novel by Nicholas Searle.

Beyond that, and because he knows that people likely expect to have the rug pulled out from under them in a story like this, Condon adds, “What excites me most is how audiences will be able to piece together this intricate puzzle with all its twists and turns. It’s not just the twists themselves that might surprise you but the motives and the sheer depth of where they come from and why.”

Consummate con man Roy Courtnay (Ian McKellen) has set his sights on his latest mark: the recently widowed Betty McLeish (Helen Mirren), worth millions.  And Roy means to take it all. From their very first meeting, Roy begins plying Betty with his tried and true manipulations, and Betty, who seems quite taken with him, is soon going along for the ride.  But this time, what should have been a simple swindle escalates into a cat-and-mouse game with the ultimate stakes—revealing more insidious deceptions that will take them both through a minefield of danger, intrigue and betrayal.

“In a sense, the story reveals the fascinating pathology of a career con man,” notes Condon.  But although the Nicholas Searle novel on which the film is based focuses more on Roy’s trajectory, Condon instinctively saw it as a cinematic two-hander between Betty and Roy—or Helen and Ian—where, he adds, “the female character and her point of view have equal weight.  It really begins and ends with this relationship that develops between the two of them.”

“Right from the start it was clear to us that we wanted a proper duel,” concurs producer Greg Yolen.  “A huge part of the appeal of this film is the chance to see these titans working together, bringing such nuance and style to these roles.  It’s a fabulous pairing that was a preposterously long time coming.”

It was Yolen who first discovered the novel and offered it to his filmmaking partner of more than a decade just as Condon was embarking on a transatlantic flight.  “By the time Bill landed six hours later, I had an email in my inbox,” Yolen recounts.  “He said, ‘This is a movie!’  I think Bill’s exceptional talent as a director is his ability to get deeply into complex characters and stories that raise a lot of questions, and to create a sophisticated piece of work that doubles as cracking entertainment.  ‘The Good Liar’ is a multi-level emotional mystery that slowly breaks itself open and reveals new angles.”

Condon and Yolen tapped acclaimed screenwriter Jeffrey Hatcher—with whom they’d so successfully collaborated on “Mr. Holmes”—to adapt the book into a screenplay.

Adapting Searle’s tale for the screen meant bringing a greater portion of the action into present-day, where technology plays an integral role and where the past remains a dark shadow.  “The book reveals things earlier and the suspense is about when the characters will discover what the reader already knows,” Hatcher explains, “whereas the film takes more of an objective approach, allowing the audience to take on the point of view of first one character and then the other.”

It was all good for Searle, who declares, “I loved the screenplay; Jeffrey did a great job.  It’s different, but equally close to the spirit of the book and I’m absolutely cool with that.  Bill was a fantastic choice to direct.  He has such a sensitivity for character.  He’s done a diverse range of movies, all of them with real heart at the center, and I like the way he focuses on the individuals as well as the larger story.”

As Betty and Roy spend more time together, “The Good Liar” takes us from Roy’s stomping grounds amid the bustling thoroughfares of London to Betty’s placid suburban home… but not so far into their hearts and minds.  To the casual observer, they’re just another couple enjoying each other’s company: Betty smiling and revitalized and Roy, with charismatic aplomb, telling his stories and reveling in the thrill of the chase.

“As we know, bad people can be filled with charm and wit to the point that audiences will even begin to root for them,” Condon suggests.  “It’s interesting to try and make them complicit in that, to possibly be distracted by those qualities and not look at what’s underneath.”

But what’s underneath is ultimately what “The Good Liar” is all about.

In a story about secrets and lies, Condon concludes, “the best part of watching a movie like this is that you never know what’s going to happen—or why.  And that’s the fun of it.”