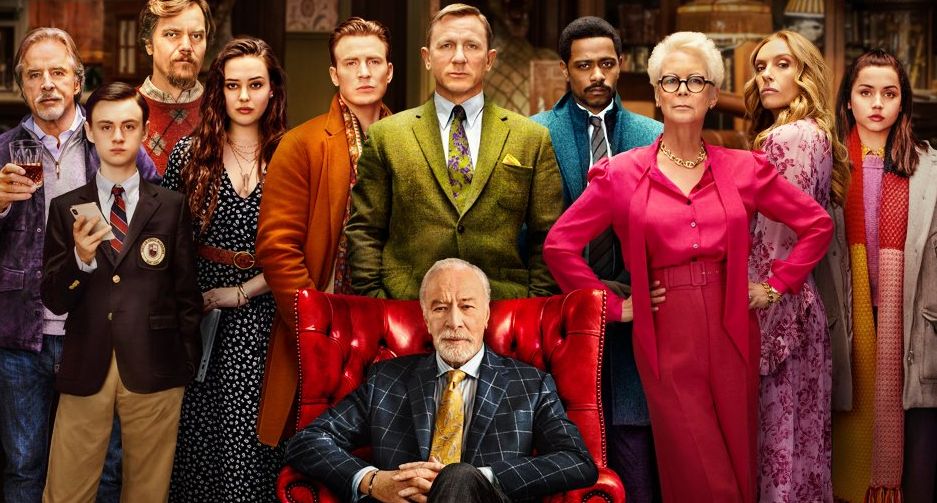 Acclaimed writer and director Rian Johnson pays tribute to mystery masterminds Agatha Christie and Alfred Hitchcock in Knives Out, a fresh, modern-day murder mystery where everyone is a suspect.

Exercising his sharp-witted ear for dialogue, Johnson ( Brick , Looper , Star Wars: The Last Jedi) is in top form as a writer here, serving up hilarious and eloquent material for an impeccable cast.

A master in blending genres, and with a keen eye for detail, Johnson employs unexpected cinematic tropes to keep the audience on their toes as the story weasels its way through twists and turns to a shocking conclusion. Irreverent, intelligent, and, most importantly, pure fun from beginning to end, Knives Out is a modern popcorn whodunit of the highest order.

It’s one of the most iconic set-ups in all of moviedom: a well-heeled if motley crew of secrethiding, badly-behaved, entirely suspicious-seeming family members converge at a swanky mansion in the wake of a sudden death, setting a brain-twisting, cat-and-mouse mystery afoot.

But in Rian Johnson’s Knives Out, this timeless scenario gets pierced through by a lacerating wit and a razor-sharp take on 21st Century social mores and family life.

Johnson re-envisions the darkly fun-loving, mega-cast whodunit by doing it in tune with our tumultuous times.

The family friction comes to a head on the eve of world-famed mystery writer Harlan Thrombey’s 85th birthday. By morning, he is dead. With a wound to the neck and knife in hand, the optics are of an open-and-shut suicide. But detective Benoit Blanc, aka “the last of the gentleman sleuths,” deduces foul play. As he and the local law begin questioning the Thrombey family and staff, it quickly becomes clear that not one suspect has a story that even begins to clear their name. As their grievances are filed to a point, they will bicker and jockey right up until the final shocking reveal, when all of their assumptions about themselves, and one another, will be upended.

“I wanted this to be a really fun, modern movie full of clues and complications and also family dynamics,” explains Rian Johnson.

At the same time, Johnson set out to follow a classic tradition: that of exploring shifting social relations from within the maze of a murder mystery. He notes that the master of the whodunnit was doing it all along. “Agatha Christie’s stories weren’t message-y, but if you look at her characters, they were very much about British society at the time,” Johnson says. “I think that tends to get lost today when you see all those butlers and colonels. You forget that at the time those were very fresh references to the different strata of the society. So, for me, the chance to use this genre to look at contemporary America and the types of people we’re familiar with right now was exciting.”

Ram Bergman, who has produced every Johnson film since his career began, knew Knives Out would have a very different texture from classical Christie. “This is what Rian does: he subverts familiar genres and makes them fresh,” says Bergman. “You start out thinking, ‘oh, I’ve seen this kind of movie before; I know how they work,’ But then you’re taken aback because you’re so invested in these characters—and the movie becomes a much deeper, wilder ride than you were anticipating.”

While Johnson might be best known as the writer and director of the epic Star Wars: The Last Jedi , he’s always had a flame for a cracking good mystery. In fact, Johnson’s debut as a writer/director was the witty and inventive Brick , which transferred a classic film noir to a modern Southern California high school. And even as he went on to direct blockbusters, he dreamed of dragging a classic parlor mystery out of the fusty past into the dizzying social complexities of our lives right now.

He had a particular love of the omnibus mystery, chock full of quirky eccentrics and table-turning scenes. But whereas many such large-scale whodunnits are populated with one-dimensional characters, Johnson wanted to do the opposite.

He decided to start with a cast of characters who are startlingly real—each part of a modern, sprawling, messy family navigating today’s social, political and class divides.

Johnson notes that the plotting alone posed a major challenge, since he wanted the audience to have the thrill of playing detective themselves, and to always be on their toes. “When you have a labyrinth of so many different characters, and so many different motives and all these twists and turns, even if you have the basic structure of it down, there’s a lot of math that you still have to do,” he laughs.

“But the key is making all those mechanics invisible to the audience, so they’re just on this fun ride.”

Yet, he also aimed to employ the whodunnit structure to engage the audience in a wealth of human drama. “I wanted to have my cake and eat it,too,” explains Johnson. “I wanted the pleasures of the questioning at the beginning, of the eccentric detective, of the big scene at the end where the whole thing gets laid out—all the stuff I love about mysteries—but also to use the mechanics of a thriller to pull you into all that’s really going on in this family.”

As he got deeper into the characters, Johnson says he could not help but draw on his own sizable family, giving the whodunnit a personal twist. “I’m very close to my family and they’re not terrible like this family at all,” he notes. “But having grown up in a big family, I’m very familiar with all the complex dynamics and dysfunctions—and of course that can become fertile ground for both humor and drama.”

While the Thrombey family each had to have their own distinct foibles and flaws, the crux of the casting was finding the film’s one-of-kind detective. Johnson knew he needed a no-holds-barred performance. “Whether it’s Poirot, Columbo, Mrs. Marple or whoever, one of the big unifying elements among movie detectives is that there is always something about them that makes you not quite take them seriously. With Benoit Blanc, I tried to write a fun, flawed character that I genuinely loved and then it was really Daniel Craig who brought all this wonderful warmth to him.”

Craig was anything but an obvious choice. After all, he’s best known as a member of the small, legendary club of Agents 007, and renowned for his gritty intensity. But with Blanc, he emerges in a whole new incarnation as a genteel, unhurried Southern gumshoe who nevertheless sets each member of the Thrombey family so off-balance that the pieces begin to fall.

For Craig, the challenge of embodying such an unlikely role was irresistible. Starting by modeling Blanc’s Tennessee drawl after real-life Southern historian Shelby Foote, he then submersed himself in the history of movie detectives.

“I grew up on Agatha Christie movies, and I also love Sleuth with Michael Caine and Christopher Reeve, these sorts of chamber pieces where everything unfolds all in one location,” he says. “But Rian brings a fresh take and an edge that feels very modern and is a lot of fun.”

Johnson unleashes his characters into a house Harlan Thrombey stuffed to the gills with macabre wonders as his personal playground. Along with every other element in the film, from performance to photography, the aim was to keep the audience’s experience off kilter.

To achieve this, Johnson brought aboard production designer David Crank, known for his memorably detailed work with Paul Thomas Anderson on such films as The Master and Inherent Vice . Recalls Crank: “The first thing that Rian and I talked about is that the house should be an outward mirror of the kind of world Harlan liked to create in his books, so it’s all a little bit twisted.”

Crank watched hour after hour of classic whodunnits. Then, he went in search of a one-of-a-kind house that could be a contemporary character in its own right, a house that would pay homage to the genre yet be entirely responsive to Johnson’s unmistakably 2019 characters. He found the perfect place just outside Boston. Built in the 1890s in the lavish Gothic Revival architectural style, it was a true family home that had never changed hands. With its medieval castle-inspired touches and dagger-like spires, the house inspired inventiveness.

For Johnson, immersion was the name of the game. He was thrilled that his cast and crew were as devoted to honing the finer details of the mystery as he was. It all become part of building the aura of deep doubt and suspense that ensnares, then unravels, the Thrombeys. Concludes Johnson: “Even as we were editing, I was still picking out little things hidden in the film—so I think it will all be lots of fun for the audience.”