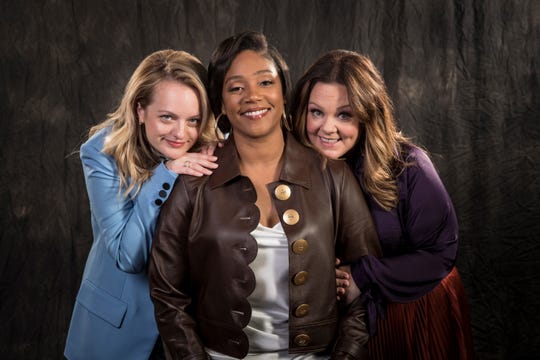 The Kitchen is a high-impact drama with a strong, female-driven cast and women in key roles behind the scenes, it takes full ownership of a genre not known for putting women at the top.  Defying expectations across the board, it turns the classic mob drama upside down like never before, lending a contemporary tone to the distinctive style and vibe of the era and serving up plenty of action, attitude and shocking turns.

“Mob movies are among my favorites,” says writer-director Andrea Berloff, whose screenplay was based on the comic book series created for DC Vertigo by Ollie Masters and Ming Doyle. “The chance to tell a story about these three unlikely crime lords, who start with nothing and learn to not only survive but thrive in a world that isn’t theirs and that they’re not welcomed into, felt fresh and exhilarating.”

Read an interview with Andrea Berfloff.

Berloff pulls no punches with The Kitchen, which marks her directorial debut. Berloff is best known for writing the 2006 disaster drama film World Trade Center, and co-writing the 2015 biographical drama Straight Outta Compton.

“This is about people who were never taken seriously, who realize they can’t sit back and let things happen to them anymore; they need to take charge and take action in a big way. What drives these women and the way they seize control is exciting and aspirational, and something that I think anyone can understand.  They move in on their husbands’ business and end up running it more effectively… and more ruthlessly.”

Melissa McCarthy who plays Kathy Brennan, a wife and mother who will kill to protect her own—and whatever she decides to make her own, was similarly drawn to the concept and to Berloff’s fast-paced, edgy script.

“There’s an economy to her writing that’s really impressive,” says McCarthy. “Andrea can put a lot into a very succinct shot and that’s the right way to tell a story like this.  It really moves.  When we first met she was very clear about the tone and the look, the strength and the unapologetic violence.  And it’s always good when you can give audiences something they don’t necessarily see coming.”

For some, the mere thought of a McCarthy or Haddish casting could suggest a different kind of movie just because, despite their range, they are so indelibly associated with their brilliant comedy work. But that’s part of the game plan as “The Kitchen” confidently plays against type—whether it’s actors known for humor getting down and dirty with serious dramatic roles, or female mob bosses ordering hits, dumping bodies and ruling their destinies in a way that’s remarkable today and would have been downright revolutionary in the ‘70s.

As Ruby O’Carroll, Tiffany Haddish channels the rage of a woman who’s constantly being dismissed and insulted and finally gets the chance to prove what she can really do. “We all go through things in life and even in the darkest circumstances there can be some surprising moments of light just to break the tension,” Haddish concedes. “That’s just part of living and being human. But this is every inch a drama and we played it absolutely straight, and, personally, I was thrilled to be able to explore that and show this side of myself on screen.”

The habitually battered Claire Walsh, meanwhile, in Elisabeth Moss’s hands, decides she’s had enough and she’s not going to take it anymore.  From anyone. Moss explains, “Claire, Kathy and Ruby aren’t superheroes or villains. What I loved about the idea of this film is that it’s about three very different women who are not stereotypical and who each have their strengths and weaknesses, in their own ways. They’re flawed and they’re real.”

These women were never really friends. Their husbands were tight: drank together, backed each other up and ran the streets. It wasn’t till they were out of the picture that Kathy, Ruby and Claire started to view each other in a new way…as allies.

One thing is for sure: they’re never going back to the way things used to be.

“In February 2016, ‘Compton’ was just winding down when I became aware of The Kitchen comic,” Berloff recounts. “So I was already thinking a lot about things like the tension that happens when different people bump up against each other and what happens when people are not given the opportunities they deserve.  Do they just take them?  And what does that look like? We can’t be surprised when disenfranchised people try to overthrow the system if the system is not working for them.”

Producers Michael De Luca and Marcus Viscidi had been following Berloff’s writing career and were eager to collaborate with her on this project for which they both had such a strong affinity. “I love gangster movies,” says De Luca. “Who doesn’t like to sit in the dark and pretend to be an outlaw, to experience the thrill and danger without having to break the law? Everyone romances the outlaw and the outsider and this was an opportunity to explore all of those elements in a new way.”

Viscidi concurs, noting, “It’s emotional, it’s compelling, it grabs you from the first scene to the last.  I’ve always wanted to do a mob story but I didn’t want it to be traditional, and this put a nice spin on it. That’s probably a bit of an understatement,” he adds with a smile. “More like a big understatement.”

The filmmakers were also in sync when it came to production, shooting as much as possible on location in four of New York City’s five boroughs to recreate the late 1970s Hell’s Kitchen setting. Audiences will be transported to that unique place and time, with a rich visual style that upholds authenticity while evoking the story’s dark, graphic novel origins.

Berloff, a former Hell’s Kitchen resident, did extensive research into how economic stress, governmental neglect and changes in the long-standing population made a volatile mix that serves as the story’s backdrop. “Things were changing, the older Irish population that was dominant in that area for decades was beginning to be crowded out by other groups. It wasn’t a pretty time for New York. The city was broke, and people in the poorer neighborhoods knew they weren’t being taken care of like those in other, wealthier neighborhoods, whether it was school upkeep or trash collection. People felt threatened and I think a lot of violence came out of that as they tried to hold on to what little territory they had,” she says.