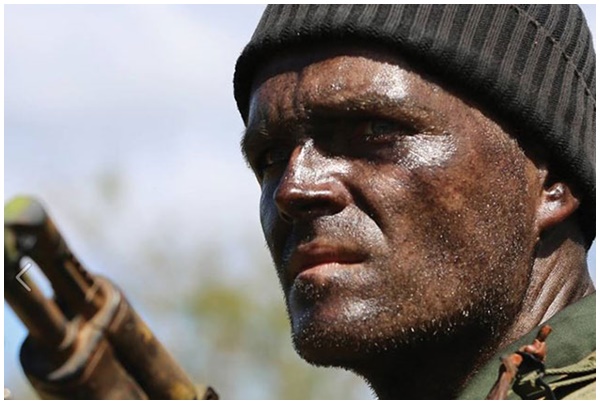 ‘The Recce is a film that defies genre, it’s a personal film about survival, love, duty and sacrifice.’

Recce is one of the first South African films in decades to explore issues regarding not only the Border War, but also the pain and suffering families had to endure during and after the conflict that lasted almost 20 years.

This war drama tells the story of a young Recce, Henk Viljoen (Greg Kriek) , who is wrongfully declared dead behind enemy lines. He must use every resource he has to get home to his distraught wife and family, who are, in turn,  fighting their own emotional battles.

Add to this the fact that the enemy is hot on his trail, it’s clear that this is no ordinary story of survival across the treacherous war-torn African landscape. This is also one of the first films in decades to explore issues regarding not only the Border War, but also the pain and suffering families had to endure during and after the conflict that lasted almost 20 years.

The filming of The Recce comes at a pivotal point in the landscape of South African cinema. The local film industry has been defined by numerous commercial or mainstream films that emulate Hollywood narrative structures, apart from limited films, that are few and far between.

South Africa has been experiencing a New Wave where filmmakers from all ages and creeds begin to make personal films that not only speaks to the collective consciousness of the country, but also the zeitgeist of the times – universally. We are beginning to explore cinema as an artistic medium, rather than a business. We are attempting to reach across the pond so to speak, spreading our voices globally.

We are moving away from general themes of poverty, apartheid & struggle; focusing on other elements in our cultures that define who we are. The Recce was produced somewhat 30 years after the violent border conflict that plagued Southern Africa for almost 20 years.

Many of our fathers are veterans, and the wounds of war are felt generations down the line. Many of the cast in this picture, did their national service, and remember the conflict vividly; the rest of the cast, including our two leads: Christia Visser & Greg Kriek, were born a decade after the war ended. However, the bush or the “bos” is something that we all live with, regardless if you experienced it first hand, or through the stories told at family reunions. This is the first film in decades to explore issues regarding not only the Border War, but also pain and suffering woman and children had to endure when they lost loved ones in the heart of bush.

Writer-Director Ferdinand Johannes Van Zyl believes that the film will provide a cinematic experience that is beyond the genre, a tale of survival, love, duty and sacrifice.

“Filmmaking is a cathartic process for me,” says Van Zyl, who also wrote the screenplay. “The idea for the film started in my head when I visualized a soldier dying in a tree, holding a photo of his wife. My fiancé was pregnant with our son at the time, and I drew a lot from that. I knew that our main protagonist had to make his way back to his pregnant wife, who was also named after my fiancé Nicola. So on a personal level, I drew from my family for inspiration, but all in all, this film is also an ode to men an woman who sacrificed body and mind during the border war. I subsequently met with producer Jac Williams, who believed in the dream. That was almost three years ago.”

According to Van Zyl, there has never been a local film like this. Never. ‘People will be presented with a new cinematic language, to a personal cinema that has, for a long time, been lacking locally. We are experiencing an incredible new wave in local cinema at the moment, with so many incredible local artistically driven movies coming out. The Recce falls perfectly in that mold. The Recce is a film that defies genre, it’s a personal film about survival, love, duty and sacrifice.’

The film was produced by Jac Williams through Cape Town based production company Man Makes a Picture, and is the first in a slate of independent features from the company. Executive producers are Jac Williams, Johannes Ferdinand van Zyl and Jacques Le Roux. The Recce is being distributed by Gravel Road Distribution Group, in a multi-country deal.

The Recce was shot in various locations across South Africa. ‘We couldn’t go to Angola, so we had to opt for locations that mimic the warzone. We shot a big part of the film on the Bergrivier farm, in the Eastern Cape. That location was both beautiful, with indigenous forests and tough. Many of the exterior scenes were filmed in the Kouebokkeveld, with its expansive empty vistas. We also shot in the Cedar Mountains, on a private game reserve which burned down, and obviously worked well for a war-torn landscape. We also shot in Kersefontein, which is a very popular location, due to its hauntingly beautiful dry and arid terrain, but also because of its beautiful manor house, which doubled as our protagonist’s childhood home. Other than that, we shot in Worcester, which for the better part, is somewhat of a time capsule, with plenty of 70’s / vintage looking buildings and neighborhoods that worked perfectly for the era’ Van Zyl continued.