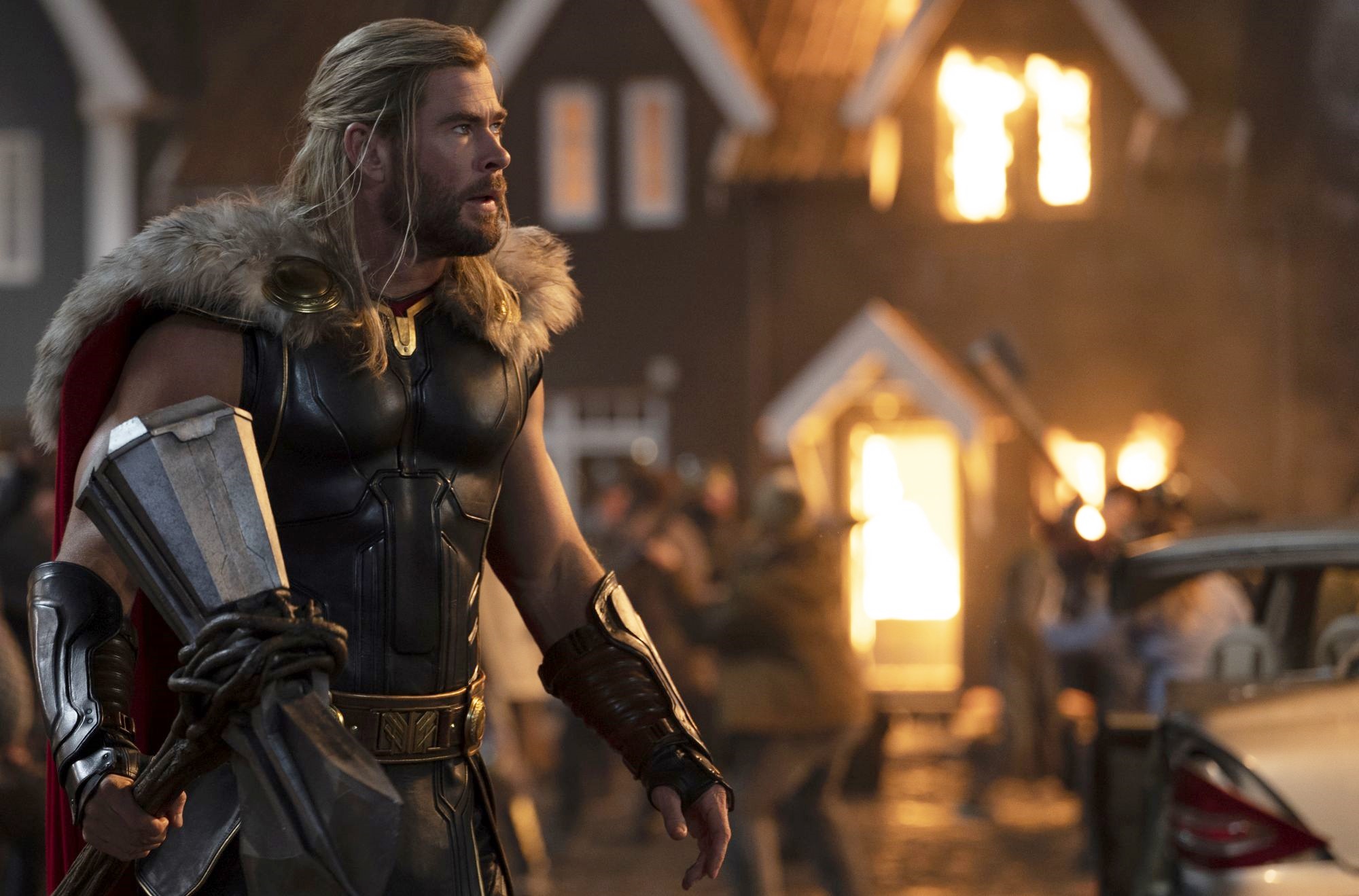 “One of the cool things about Marvel films is this ability to embrace various genres within a single film,” says filmmaker Taika Waititi. “It keeps audiences guessing, and the characters within these different genres then feel different all the time. When we came up with Thor: Love and Thunder, we knew the fans would really freak out about it, and it really does suggest a lot of what the film is about.”

For Waititi, a native New Zealander, who made his Marvel Cinematic Universe (MCU) directorial debut with 2017’s Thor: Ragnarok, the third instalment of Thor, Thor: Love and Thunder was a departure for the God of Thunder.

“I don’t think it’s far-fetched to expect a change in a character like Thor,” says Waititi. “He’s been around for a long time, so there’s time for him to go through different phases. I was relieved when I knew how high he was testing in the ‘Ragnarok’ screenings, but it was also a sense of pride that we’d managed to reinvent this character in a way that made the film do well but also made people want to see more of him. Waititi directed the film from a screenplay he crafted with Jennifer Kaytin Robinson.

Since 2011, Thor has appeared in seven MCU features as well as Marvel Studios’ “What If …?” animated series, becoming the first character to lead four franchise films.

To fans around the world, Chris Hemsworth simply is Thor and, yet, he still feels compelled to explore and evolve his role. “There was a huge amount of pressure coming into this,” admits Hemsworth. “Thor is the only character to make a fourth film so far, so I wanted to do something different. I want to always do better with this character.”

“What sets this movie apart is that, at its heart, it’s a love story,” says producer Brian Chapek. “We’ve seen Thor grow so much over the years. After the events of ‘Avengers: Endgame,’ we started to see cracks in his armour. He started to feel some ownership over all the people he’s lost in his life.”

On his search for meaning, Thor makes a stunning discovery: Jane Foster, his ex-girlfriend and a world-renowned astrophysicist, has proven herself worthy of wielding his magical hammer, Mjolnir, as the Mighty Thor — a transformation that masks a very personal battle.

Natalie Portman, who portrayed Jane Foster in 2011’s “Thor” and 2013’s “Thor: The Dark World,” was thrilled about her return to the MCU. “Taika came over to my house to talk because I’d been out of the Marvel world for a while,” says Portman. “When he explained how Jane would become the Mighty Thor, it was fascinating to consider what that experience could be like. Working on the film was a really exciting challenge because it was so improvisatory, and Taika really keeps you on your toes.”

“To bring her back in this new iteration, in this storyline from ‘The Mighty Thor’ in which Jane Foster becomes a Super Hero, is exciting,” says Waititi. “It’s brilliant to see Natalie in a way that we don’t expect. She’s such a great actor, and in keeping with reinventing this franchise again and again, we didn’t want to go back to seeing her in the same role. We don’t want to see her just being a scientist on Earth waiting for Thor.”

“Jane is a really interesting character because she’s human, but she gets this amazing power,” says Chapek. “How is she going to deal with having that power? I think audiences are going to be able to relate to Jane and her journey in a really meaningful way because she is a mortal who is dealing with very human issues.”

“Thor: Love and Thunder” also reveals more about Jane and Thor’s relationship and eventual breakup, allowing both Hemsworth and Portman to showcase their comedic chops. “Natalie was hugely enthusiastic and up for anything collaborative, with a great sense of humor,” says Hemsworth. “This is a very different direction for the character, so it was like a rebirth. She was down for it. It was so much fun.”

In Thor: Love and Thunder the God of Thunder embarks on a journey unlike anything he’s ever faced — one of self-discovery. But his efforts are interrupted by a galactic killer known as Gorr the God Butcher, who seeks the extinction of the gods. To combat the threat, Thor enlists the help of King Valkyrie, Korg and ex-girlfriend Jane Foster, who — to Thor’s surprise — inexplicably wields his magical hammer, Mjolnir, as the Mighty Thor. Together, they venture out on a harrowing cosmic adventure to uncover the mystery of the God Butcher’s vengeance and stop him before it’s too late.

Love is a resounding theme that carries throughout Thor: Love and Thunder

“‘Thor: Love and Thunder feels similar to Ragnarok in terms of tone and style, but we wanted to double down on how vibrant and crazy the worlds are and the situations we put Thor in,” says Waititi. “Because when you’re dealing with outer space and a Viking, if you run and embrace that incredible combination as the thing that powers the story, you’re only really limited by your imagination.”

“If Ragnarok was a 1980s synth-pop album, ‘Love and Thunder’ is a metal album,” says producer Brad Winderbaum. “We knew we wanted a title that would evoke a 1980s rock ‘n’ roll feeling. And ‘Love and Thunder’ just seemed to do that.”

“At Marvel Studios, every film is a new frontier,” says Winderbaum. “We want to make something exciting and new, and we want to delve even deeper into these characters. Thor is a very existential character, and one of the things audiences will see in Thor: Love and Thunder is not just a hero who’s funny, who gets out of situations using his wit and charisma, but a guy who feels very deeply.”

Love is featured in the title, felt throughout the story and soaked into every frame of “Thor: Love and Thunder” owing to a stellar cast and crew who devoted 89 days to the Australia-based production beginning January 2021.

When Thor first appears in “Avengers: Endgame,” he’s clearly experiencing an existential crisis, having recently suffered a series of brutal blows. He’s lost family and friends, his home of Asgard, Mjolnir and his battle with Thanos — not to mention his god-like physique.

He’s also lost his will to lead, as King of New Asgard, and after Iron Man’s snap restores the Universe, Thor bestows his title upon Valkyrie and hitches a ride with the Guardians of the Galaxy. “Thor travels off with the Guardians and — much to their discomfort and irritation — plants himself firmly in the centre of their posse and tries to dictate how things should be run,” says Hemsworth.

Waititi says he takes inspiration from the film’s main character. “I really feel like Thor, more than any other character in the MCU, lends himself towards big, inventive, colourful creatures from different worlds,” says Waititi. “He has a casualness and a sort of swagger about him when he encounters these aliens. I really feel like we’re making it a funnier, bigger adventure with even cooler characters and a really kickass soundtrack.”

But no matter the size of his conquests, Thor’s internal void is even bigger. He declares his Super Hero days over and sets out to discover the man he’s truly meant to be. “Most people who are trying to find themselves are running away from something,” says Winderbaum. “What he’s running from is love because, in his experience, everyone he loves dies. Whether or not he can articulate it, he believes he’s cursed.”

Christian Bale joins the MCU as the terrifying antagonist

Unfortunately, Thor’s seclusion is short-lived, as a terrifying new foe threatens to upend the galaxy. Gorr the God Butcher has waged a war on the gods, killing them one by one with a weapon of immense, dark power.

Thor has faced off against countless enemies — from Laufey, King of the Frost Giants, to his sister Hela, the Goddess of Death, to Thanos, the Mad Titan — but filmmakers chose to raise the stakes even higher in “Thor: Love and Thunder.” “We needed to step up from Hela and find a villain who was somehow even more formidable,” says Waititi, “and we found that in Gorr, who is played by the remarkable Christian Bale.”

Once a peaceful, pious man, a crushing loss propels Gorr on a mission fueled by his desperate need for revenge. “Gorr played by the rules, and so when he realizes he’s been betrayed by the gods, he’s overtaken by a rage that hits such a fever pitch that he gains an evil, ancient power and sets out to rid the universe of these gods, who don’t take care of their humans,” says Winderbaum.

“There’s so much drama and insanity around Gorr, but Christian Bale managed to pull the focus right into each moment,” says Hemsworth. “You can’t take your eyes off him.

The character is fascinating because like all good villains, Gorr has a point. He may not be going about it the right way, but there’s empathy in the script and Christian brought so many more layers and so much more depth to Gorr.”

As Gorr blazes a deadly trail through the galaxy, Thor appeals to his allies, and his own ego, to put aside any differences and take up arms. The team even attempts to enlist the support of the legendary king of the gods, Zeus, played by Russell Crowe. Zeus spends his days living in excess and seems oblivious to the growing number of gods gone missing.

Thor will need all the help he can get to contend with the God Butcher. “Gorr is on a scorched-earth policy, and so what we have in ‘Thor: Love and Thunder’ are our heroes trying to stop a killer before he strikes again, travelling the cosmos, deducing where he’s going to strike next and racing to protect his next victim,” says Winderbaum