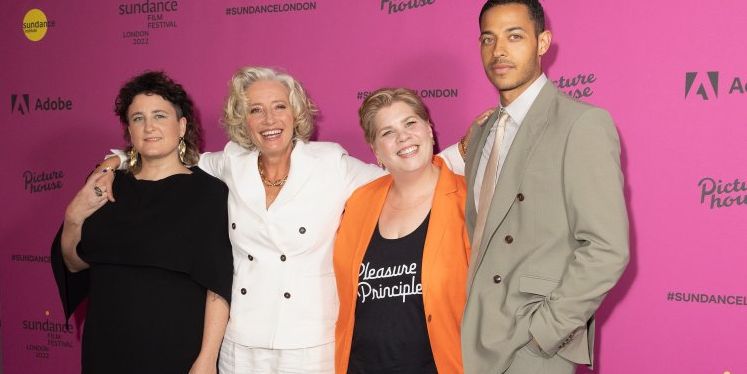 Director Sophie Hyde spent a lot of time working with writer Katy Brand on the script of Good Luck To You, Leo Grande before it approached a final draft, giving the thoughtfulness and care needed to balance a story with powerful themes relating to human intimacy.

“The kind of director that I am, when I come onto a project, I want to really get my hands dirty, really get in on the script,” explains Hyde. “I have to feel like I can make it from inside of myself. And so there began a process between Katy and I where we would take what was there and expand on it. We worked together to sculpt it into what it is now. I asked a lot of questions to Katy, Debbie and Emma to make sure that I understood the kind of film they wanted to make, and that it was the one that I could make.”

Hyde and Brand worked through several drafts asking themselves questions about how to push the film into really interesting territory. “How can we ensure that the story is really pleasurable for an audience? How can we make sure that we’re consulting sex workers and that we’ve got the right material to tell that story, that’s not harmful, that’s perhaps empowering in some way?”

Hyde recollects. “I would give Katy a lot of notes on the script originally and she would respond with certain things. She was very generous with allowing me to find things as well, and those became part of the story.”

“I had a fantastic time working with Sophie,” says Brand. “Her director’s notes and insights were the best I’ve had. We were always talking, and I knew that she was going to create the atmosphere on set and create that intimacy and trust with the actors.” According to Gray, this is one of the qualities that made Hyde perfect for the project. “Sophie brought a strong point of view and a fearless ability to lean into the material,” says Gray.

Good Luck To You, Leo Grande: How a brilliant idea evolved into an irresistible film

Hyde’s attention to detail brought depth to the script for Thompson and McCormack as well. “I thought, this is gonna be great,” Thompson says of Hyde’s attachment to the project. “She’s really going to examine this forensically, this piece, and really really take us through it, little piece by little tessellated piece you know and really make it specific.”

Given the comedic aspects of the film, Thompson says, without Hyde it wouldn’t have become what it had the potential to be. “It could have been a bit generalised. Because it’s funny and touching and unafraid.”

Integral to the film was making sure that sex workers were consulted through every stage. “I did a lot of research with sex workers,” says Hyde. “We had some wonderful consultants with lived experience and their stories and insights were just brilliant. We wanted to make sure that what we were saying was not harmful in any way, and that it felt real to people that were engaged in this kind of work that is deeply intimate work, it is working with people very closely.”

It was also important to make sure sex work wasn’t depicted in a binary way in the film. “That we weren’t saying ‘all sex work is really cool and empowering’, but also not saying that sex work is bad and there’s a deep, dark traumatic side to every sex worker,” explains Hyde. “It is a job. For some people this is what they do for a living, and they enjoy it and they’re good at it, and finding that part of Leo was really important to me.”

It was also crucial for Daryl McCormack to depict the job accurately. “Meeting with sex workers that Sophie had been consulting with was massively important for me in preparing for the role,” explains McCormack. “I’m not representing all sex workers in the role because the work and workers are so diverse it would be impossible to do. But it was important to speak to them about their profession, their experiences and hear them as people to help us to understand Leo’s character.”

In a script that approaches intimacy and sex with comedic way, vulnerability and openess were vital. “To get to the place that I think we got to, and that I’m really happy with, Emma and Daryl had to be really willing to go somewhere,” explains Hyde. “They were both ready for this film in a certain way, and they were willing to put themselves physically on the line, to reveal themselves.”

Thompson and McCormack even surprised themselves while rehearsing the funny but deeply intimate script. “We used to rehearse, and we used to not sometimes be able to get through our rehearsals because we were laughing so much. We’d be just doing the lines and just not able to get them out but then when we came to do them, sometimes they would end up being very upset and quite emotional,” says Thompson.

Because of the nature of the story, communication and respect of boundaries were constantly evolving and being discussed. Hyde explains, “With the nakedness for instance, it could have been that there was no nudity in it at all, that we filmed it in a way that it was suggested. Alternatively, we could have had a lot of nudity. So we discussed a lot and tested together a lot and there was always an openness to their decisions in it as well as them listening to what I felt we could do. And there was certainly always an idea that they could change their minds.”

Rehearsal was an important part of deciding how these screenings would take shape and building a comfortable space for both the actors and filmmaking team. “Emma is really amazing at this work too, she was really ready for it and set the scene in that rehearsal room for us. A lot of it came from the rehearsal room. I felt like Emma, Daryl and I stepped onto set knowing the level we wanted to go to and felt in control of that,” says Hyde. “The way that we worked up to the intimacy is we talked a lot, about nudity, about sexual touch and how we were going do that in the film. We did a lot of workshops, exercises, games, and I led them through a process of opening up to each other so they could feel comfortable.”

Having a crew that was sensitive to the material and incredibly capable also helped to set the environment and keep Thompson and McCormack feeling safe. At the request of the actors, the crew operated under closed sets whenever there were sexual scenes or nudity. Emma and Daryl would come onto set, they would disrobe together, make themselves comfortable and then the crew that needed to be there would come on, Hyde describes. “It felt like they were leading the set in those moments, it always felt like they were in control of how they were being seen and what they were doing.”

Ultimately, it was a trust and ability to communicate openly between Thompson, McCormack, Hyde and the crew that made the scenes possible. “The great thing about Emma and Daryl is that they created, not just in the rehearsal room but between them, a really comfortable space,” says Hyde.

“They got to know each other very well and they chose how to create the film and the characters, and I feel that at all times they were in control of that. And I very much felt my job was to set up the potential for that and protect it.”