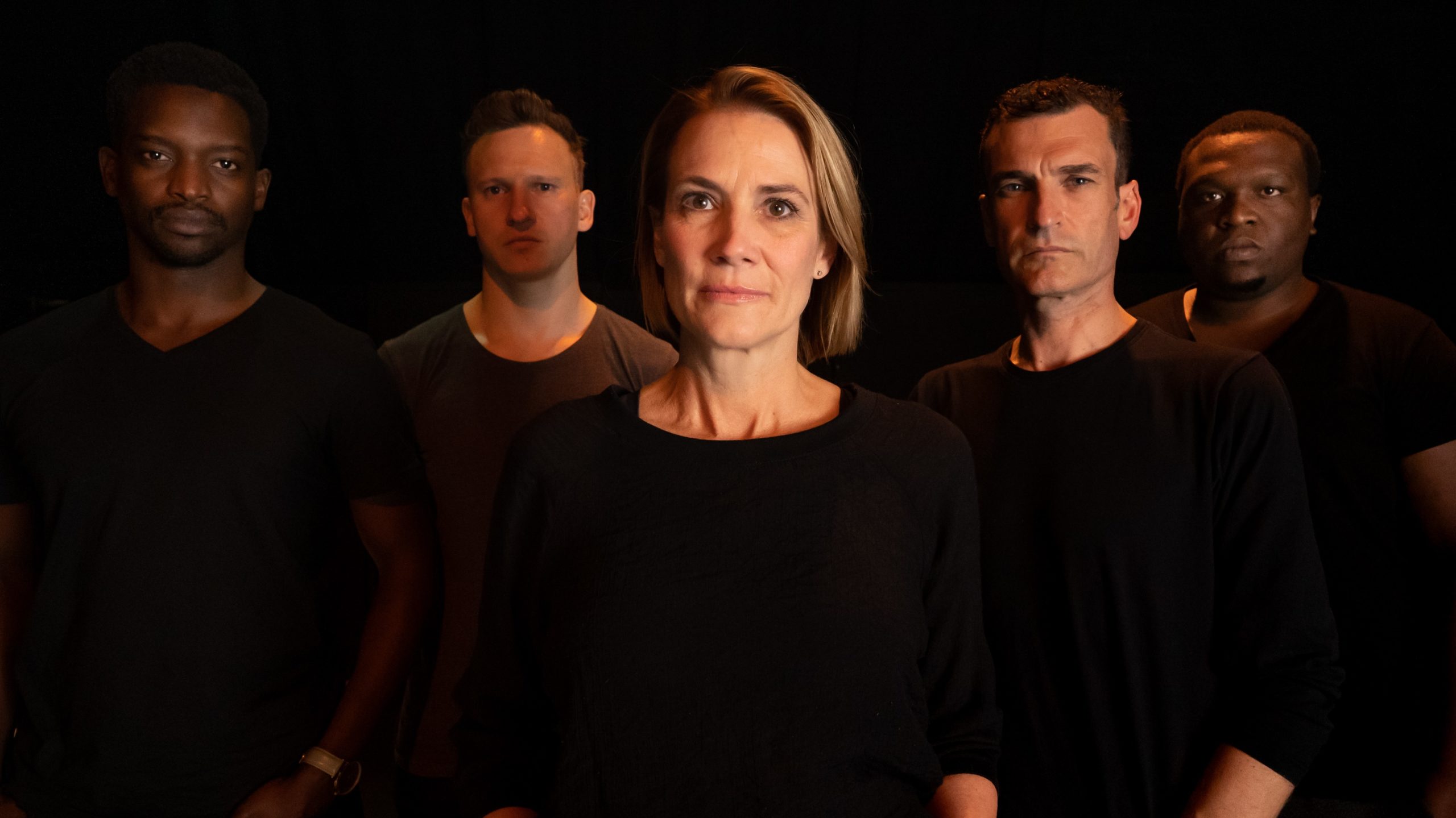 Writer, actor and director Paul du Toit’s latest play The Unlikely Secret Agent is based on Ronnie Kasril’s award-winning book and will enjoy its world premiere on June 9 at The Drama Factory in Somerset West.

The play tells a true story of bravery and hope in the face of seemingly insurmountable odds, with du Toit stepping into the shoes of Ronnie Kasril, with Erika Marais, winner of an Ovation Award at the National Arts Festival, in the role of Eleanor, Kasril’s wife. The cast also includes Ntlanhla Morgan Kutu, making his professional theatre debut, Gideon Lombard (Kyknet’s Suidooster Treknet and on stage Stressed to Kill,  Orpheus in Africa) and Sanda Shandu, multi-talented actor and TV star (Netflix’s “The Kissing Booth” and SA’s “Skemerdans”).

“I am thrilled that  the dramatic story of a young woman’s courageous battle with the South African security police in the 1960’s, is  coming to the stage.” Says Ronnie Kasrils. “This is a brilliant script about what led a single mother to join Umkhonto we Sizwe, and how she managed to defeat her interrogators. Erika Marais has captured Eleanor, my girlfriend at the time, quite brilliantly. You will question yourself – could you have stood up against apartheid as this slender young woman did. “

Du Toit is really excited about their youth day performance. Audience members can sponsor tickets for underprivileged audiences. If anyone want to get involved, please contact the drama factory. www.dramafactory.co.za

The Unlikely Secret Agent is described as a story of bravery and hope in the face of seemingly insurmountable odds… tell me more about this?

It is first and foremost a love story. Two young lovers heady with the flush of romance and filled with the brave spirit of youth. Decide to act on what they believe to be right. They become politically active. They feel the rush of being freedom fighters.

1963, South Africa. The country is on a knife edge.  Political protest, sabotage and violence has engulfed the country. Government forces of the Apartheid regime, under Hendrik Verwoerd, brutally suppress resistance. Under the State of Emergency, the feared Special Branch of the police arrest anyone suspected of being involved in underground activities.

The plot focuses on Eleanor, an unassuming, young single mother who is arrested in Griggs Bookstore where she works in Durban and taken for questioning. The police are on the hunt for her lover, the notorious “terrorist”, Red Ronnie Kasrils.  There is no point in her resisting, the police “know everything”. But do they really? Eleanor is keeping a secret. She is a clandestine agent for the Underground ANC. But she must protect her comrades and Ronnie. She makes the daring decision to fake a nervous breakdown in order to be transferred to a psychiatric institution. From there, she begins to plot her escape.

You mentioned that this is one of those South African stories that simply must be told.

This is one of those South African stories that simply must be told. A story of sacrifice from someone who, though she would never consider herself one, is nothing short of a national hero. A story that reminds us of just how much these heroes were prepared to risk fighting oppression in our country.

I’ve always had a keen interest in History, especially South African history, but this was a story I had never heard before. Bravery and tenacity in the face of frightening odds. And all these virtues found in the most unlikely person: a young white middle clerk clerk from a bookstore. Tambo Mbeki put it perfectly when he said: “This little, ordinary woman with the heart of a lioness confirms the truth that our freedom was not free”

How relevant is the story in the world we live today?

We do not fully know just how much we owe some of our previous generation. How difficult it must be for those of them who are still with us to see us squander that freedom they earned us.

What do you think makes a person heroic?

Humility. Something Eleanor epitomises. In my eyes she is nothing short of a national hero, but she never wanted ant accolades.

How challenging was the writing of the play?

It started of a s a one woman play, but I found it more interesting to have her interrogators on stage with her. And then suddenly I had four actors who could play all the other characters in the story!

The fact that this play is based on real events did mean that I was restricted as to what I could allow my characters to do. Luckily I had Ronnie and is book to inspire me and provide motivation for my characters. But there did come a time where I had to not so much leave the facts behind but use them as a foundation and let my imagination take over. I had to take certain liberties with events and characters for dramatic effect. The truth however always remained paramount.

I of course, couldn’t put the whole book into the play. I had to choose which events best illustrated the qualities of Eleanor I wanted to bring across to the audience

The other challenge was how to cram three years, events that played off over thousands of kilometers as well as a myriad of characters in to one and a half hours?

Did you work closely with Kasril during the writing of the play?

Ronnie was verry supportive. We had many Zoom meetings where we peppered him with questions. He was incredibly generous with his answers. And, of  course, he gave us permission and the freedom to adapt his book. It was very encouraging the get his feedback of every draft. I had to know if he thought the script rang true.

Did you write the play with the prospect of directing it?

It was never a certainty, but always a possibility given Covid budgets! I am an actor first and foremost, so it was natural, that while I wrote, I had a picture in my head of how I saw it playing out on a stage.

You are also stepping into the shoes of Kasril? Was this a daunting task?

Very much so. From the point of view of playing such a well-known personality and also having to wear the writer’s hat, actors’s hat and director’s hat at the same time. But given the financial restrictions in our industry this is fairly commonplace. We are used to compromise. The festival circuit prepared me for this. We are very used to playing in a barn, with no lights or sound equipment and ten minutes to move your set in before the audience arrives!

What has really helped me is the assistance my cast has given me in term of providing an outside eye. This as been a very democratic process. Each actor’s input matters and is given full consideration. There is very little hierarchy. I think Eleanor would have liked that.

How do you personally relate to Kasril and his story?

The biggest question I ask myself is: Had it been me, at that time, in that situation, would I have had he courage to follow my convictions? Would I have been prepared to sacrifice my liberty so that others could have theirs?

Did you writing the play inform your decisions as director and actor?

My ideas and decisions as an actor, director and writer evolved as one. What I am lucky to get from my company is their critique. The more ideas get thrown into the mix the bigger the magic! Though the final decision does rest with me I like the think of myself as a director in the mould of the benign dictator!

You have cast Erika Marais as Kasril’s wife, who also steps in as producer… tell me about this

Erika Marais was the driving force behind the project. I think after winning the Ovation award at the National Arts Festival she was looking for a new project. She had read the book some years previously, but it was then that she approaches me to adapt it into a one woman play for her to perform. I

As I said earlier, I tried to write the one woman play, but no cigar. Now thw producer has four extra salaries to pay! Sorry Erika!

Marais confided that her research into Eleanor’s character found her sharing coffee, cake and memories with Kasrils last year: “We had already been chatting for months on the phone, zoom and e-mail. But meeting with him in person and having him share Eleanor’s inner life with me is proving to be invaluable in my preparation to portray Eleanor truthfully and to do justice to her character.”

How do you see the future of theatre in South Africa after the devastating blow of the pandemic?

I am very hopeful. I think the lockdown especially has made people long for contact and to be moved by others and to be amazed by our fellow human beings. What better place than in a theatre.

Will the play travel elsewhere after its run at THE DRAMA FACTORY?

There has been really interesting foreign interest from Hong Kong and London, but I would really like to play this in South Africa to audiences who can most relate.

Tell me about your future plans?

I will be play Satan in a film From the Ashes. We’ve shot most of in in Ireland already. The movie is scheduled to shoot in the US later this year and also features South African actress Jean Nelson.

I will be exploring the industry in Canada with my wife and kids who are based there now, and will always be drawn to South African stories.