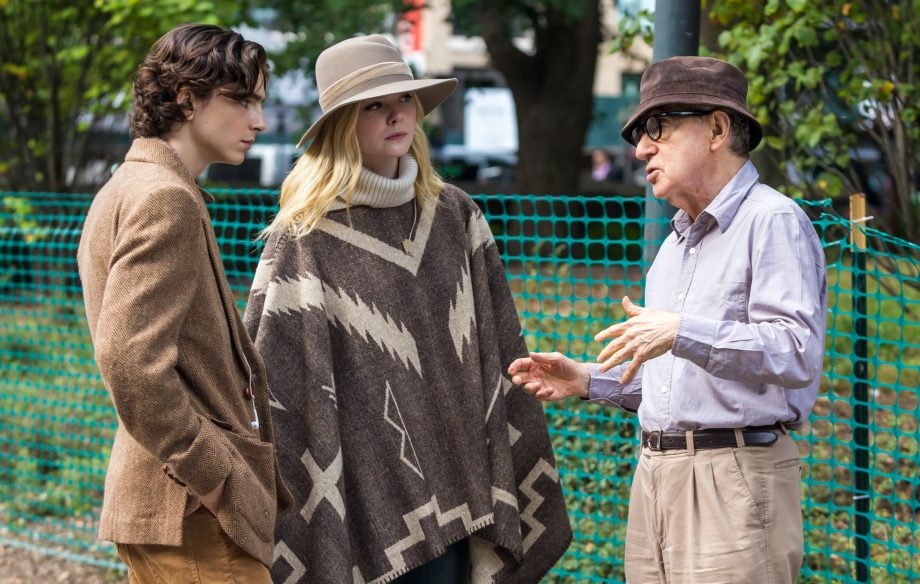 A Rainy Day In New York is much more optimistic than most of the films that Woody Allen has made during a career that spans more than six decades.

“This is a love story, and I was excited by the idea of setting against a romantic portrait of New York in the rain, says Allen.

“I do think it’s positive,” says Allen. “I think that Gatsby has found himself over the weekend. He has a better relationship with his mother, and he’s come to a conclusion about the woman in his life.”

“Gatsby and Ashley come to New York on a Saturday morning with plans to leave the next morning. As Gatsby has scheduled everything down to the minute, we are always aware of what time it is and how it is slipping out of his control. Time is a major theme in the film and it isn’t coincidental that a clock figures prominently in the story.

“Gatsby has everything planned out so it will be a delightful weekend with Ashleigh, but it doesn’t work that way,” says Allen.

“As Gatsby says, ‘the city has its own agenda.’ Time is always against you. You can try to manage it, or manipulate it a little bit, but in the end, you can’t. From the moment the characters kiss under the clock at the end, time starts to move their relationship forward, and that relationship may last a year, two, ten, twenty, or a lifetime. But it will proceed in time as everything does.”

Woody Allen’s romantic comedy tells the story of college sweethearts, Gatsby (Timothée Chalamet) and Ashleigh (Elle Fanning), whose plans for a romantic weekend together in New York City are dashed as quickly as the sunlight turns into showers. The two are soon parted, and each has a series of chance meetings and comical adventures while on their own. When Ashleigh gets an assignment from the school paper to interview celebrated film director Roland Pollard (Liev Schreiber) in Manhattan, Gatsby seizes the opportunity to show Arizonabred Ashleigh his favorite haunts in his hometown. An old soul, Gatsby loves vintage New York, and he puts together a jam-packed itinerary of classic haunts like the Bemelman’s Bar at Café Carlyle. Gatsby’s well-laid plans are quickly sidetracked when Pollard invites Ashleigh to watch a workin-progress screening of his new film. Ashleigh is soon off on a head-spinning series of encounters that lead her from Pollard to screenwriter Ted Davidoff (Jude Law) to movie star Francisco Vega (Diego Luna). Left to his own devices in the city, Gatsby ends up spending the day with Chan (Selena Gomez), the sharp-witted younger sister of his ex-girlfriend. He also goes to a party thrown by his wealthy parents, where he has a life-changing conversation with his mother (Cherry Jones). Over the course of a dreamy and drizzly day in New York, Ashleigh discovers she might not be who she thought she was and Gatsby learns that while you only live once, once is enough if you find the right person.

The characters in A Rainy Day In New York all have issues that revolve around their identity.

Gatsby has the most obvious complex—he hasn’t yet figured out who he is. Gatsby’s mother (Cherry Jones) is ultimately revealed to be a completely different person from who he had previously thought her to be. We are repeatedly reminded of Ashleigh’s unformed identity: when she meets Vega, she is so flustered by his fame that she can’t remember her own name, and twice in the film she holds up her driver’s license as a means of identifying herself. Screenwriter Davidoff lives in the shadow of director Pollard, always once removed from the auteur’s acclaim. Pollard, in turn, has lost touch with the artist he once was. Finally, Vega struggles as an actor with being typecast.

Closely linked to this recurring motif of identity is the yearning that the characters have to be seen. Gatsby wants his mother to truly see and accept him as he is; Chan was hurt that Gatsby never noticed her when he was around her sister; Vega is first seen wearing a mask, and Ashleigh doesn’t recognize him until he takes it off; and Gatsby’s mother decides the time has finally come to let Gatsby see her as she is.

“The characters have a need for people to look though their physical exteriors to who they are inside,” says Allen. “This is a common thing in life. You have a crush on somebody and they don’t see you. Of course, they see you visually, but you don’t register in an impacting way on their life.”
In keeping with characters who struggle to be recognized for who they really are, the visual style of the film often obscures the characters faces, often in shadow. One example is when the car window on the film location shows a reflection of what is outside the car rather than Gatsby and Chan inside the car.

“Cinema is not about showing everything very clearly all the time,” says cinematographer Vittorio Storaro, who previously teamed with Allen on Cafe Society and Wonder Wheel.

“Most of the time, it can be more appropriate for the characters to be behind something or only visible in part. You need to create some different moments as a way of keeping the interest of the audience.”

Storaro used different kinds of light and camera movement to emphasize the differences between Gatsby and Ashleigh’s personalities. “Gatsby loves New York with clouds in the sky, or even better if there’s a little rain,” says Storaro.

“Ashleigh is bright and passionate, so I used warmer colors with her. Even when Gatsby and Ashleigh are together, Storaro found variations. “It doesn’t rain the entire day, in the same way,” says Storaro. “Sometimes the wind moves the clouds and the sun comes out, and later, the sun goes away again. I took advantage of those kinds of chance happenings. When Gatsby, under the clouds he loves, calls Ashleigh, I had a warm beam of light come out where she was.” Storaro also used the Steadicam for moving shots with Ashleigh, and a still camera for Gatsby.

“We used the Steadicam to underline the kind of freedom Ashleigh needed to have in movement,” he says. “She is more free-minded and open to everything, but Gatsby is trying to keep things much more simple around himself.”

Like New York City, the rain is a pivotal character in the movie. “We wanted rain to be a symbol of romance and love in the picture,” says Allen. “New York is very beautiful on those gray, foggy, or rainy days. There’s something about the soft lighting and the streets getting washed clean.” The rain also suggests the different ways that Gatsby and Ashleigh see life. “Ashleigh sees the rain as gloomy, while Gatsby sees it as romantic,” says Allen.

Allen began his career as a comedy writer in the 1950s, writing jokes and scripts for television and publishing several books of short humor pieces. By the mid-1960s Allen was writing and directing films, first specializing in slapstick comedies before moving into dramatic material influenced by European art cinema during the 1970s, and alternating between comedies and dramas to the present. He is often identified as part of the New Hollywood wave of filmmakers of the mid-1960s to late 1970s.

He has won four Academy Awards: three for Best Original Screenplay for Annie Hall (1977), Hannah and Her Sisters (1986), and Midnight in Paris (2011), and one for Best Director for Annie Hall,  and also garnered nine British Academy Film Awards.