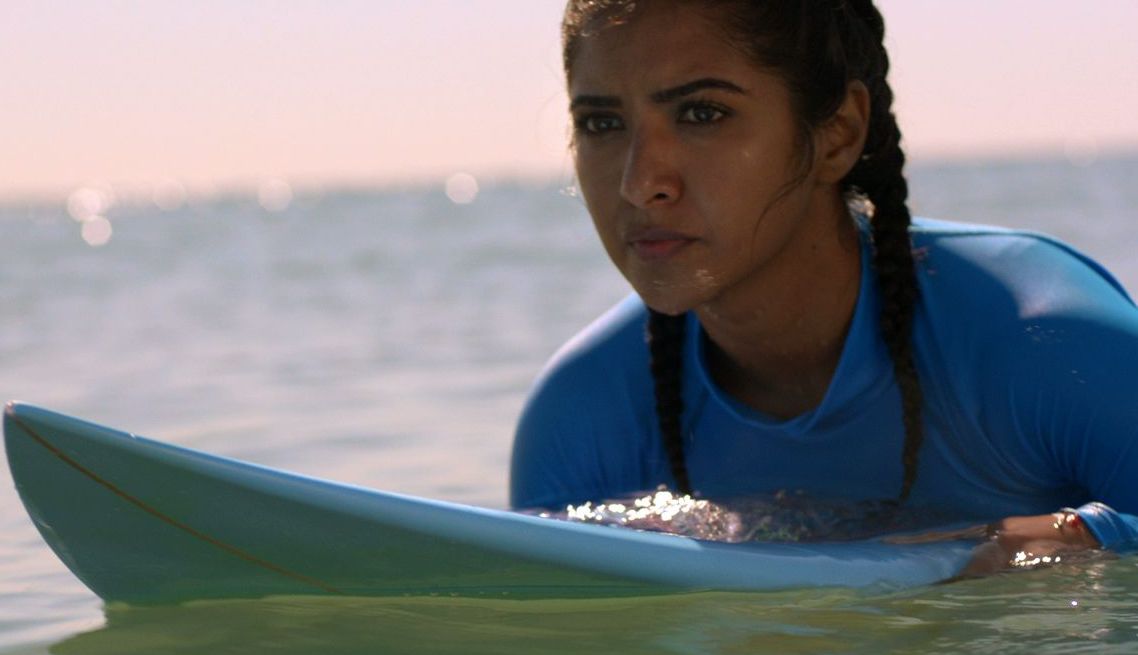 Inspiration for the film came from Timothy’s observation of surfing and fishing life in Durban.  He saw that surfing was never aspirational for Indians in Durban and watched from afar.

Beach culture is the essence of Durban and Timothy wanted to capture the conflict and longing that comes from people wanting to aspire to different things. Timothy says he wanted to tell a story set in his community with characters that are relatable and universal.

“The issues they deal with are common and perennial: relationships, family and a sense of belonging. Deep End is about capturing the essence of culture and the extreme and sometimes dark side of surfing”, he says.

Deep End manages to capture the magic of the water together with the emotions and multitude of experiences that come from one of the most diverse cities in the world.

Director of Photography Ebrahim Hajee shows his skilled hand when it comes to imaginatively and beautifully crafting shots of Durban, its people and the magnificent ocean through his experience in documentaries and music videos.

Producer Jacintha De Nobrega is proud of the fact that the film is truly local with 80% of the crew and cast hailing from Kwa-Zulu Natal.  “Our focus is to grow the television and film industry and this can only happen when we engage our local crew and artists and provide the opportunities to up skill people,” she said.

“We wanted to keep it homegrown and portray characters that are real and not caricatures”, says director and writer Eubulus Timothy. When he wrote the screenplay he had no idea that the themes the film addresses would be so topical.

“This is what drew me to the script. As a woman I could identify with the characters, the journey of self-discovery and pursuit of independence. The story is so universal that woman all over the world will identify with, it just happens to be set in Durban,” says producer Jacintha de Nobrega.

With the likes of cast members some new to the screen and others more experienced such as Greg Kriek, Carishma Basday, Suraya-Rose Santos, Mahendra Raghunath, Robin Singh and Priya Lutchman, Deep End celebrates and has given a platform to local actors in South Africa.

The soundtrack includes music from Durban born group Easy Freaks whose sound cannot be defined but will leave you feeling something real.

“Deep End is about culture, relationships, family, a sense of belonging and capturing the essence of living in Durban,” says Timothy “The characters are exciting and energetic and are easy to relate to on a global level whereas the issues they deal with are common and recurring. “

“Durban is a vibrant City and has a vibrant energy with intense color but it’s also a city of strong contrasts, with overwhelming textures that is influenced by cultural diversity. I love the light and intensity of the city and used it in the film bringing a subtle but lively ambience to the work. So the colour and texture of the film follows a palette of strong bright colours with deep shadows and contrasts. The contrast of the blue green ocean and the deep blue sky with the white foam of crushing waves captures Durban beach life. “