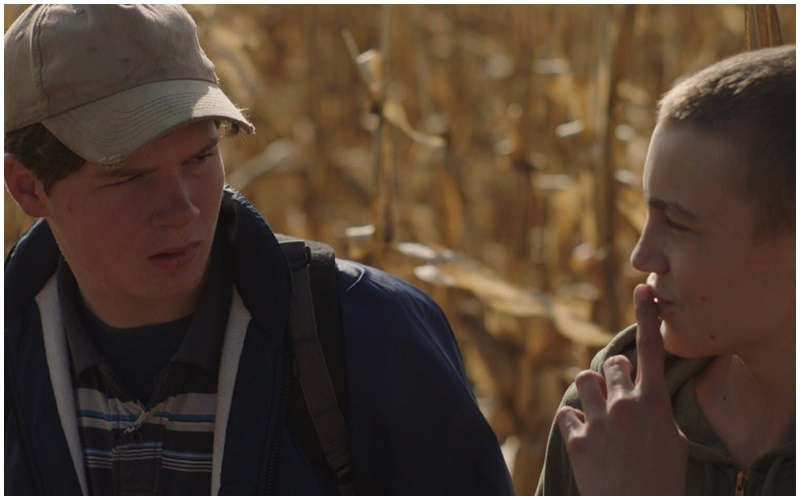 Brent Vermeulen owns this role with dignity and bravura, embracing the despairing loneliness of a young man who is invisible to his family, and hopelessly lost in his identity, echoing the universalness of other films that dealt with themes of identity and sexuality: the poignant Brazilian What He Looks Like, the Irish God’s Own Country, the humble Australian Mudpie, and the rousing Norwegian series  Eyewitness.

Janno wears his land with pride and although he is invisible to his own family, he is not invisible to himself, trying desperately to fill his loneliness with a forbidden yearning of loving who he wants without judgement or dishonour.

This impressive feature debut from Greek-South African filmmaker Etienne Kallos, who wrote and directed the film,  vividly captures Janno’s world and the characters that live in it, with subtlety and hushed intensity; he does this without stylistic gimmicks or intrusion on his story, offering us a revered journey into the heart and soul of characters, we see what they see and share their anguish.

The immense power and emotional core of Die Stropers rises like a Phoenix from the ashes when Janno witnesses his childhood come to an abrupt end when his extremely devout mother (Juliana Venter), who prays for strength for her son, for his blood and seed; invites a young delinquent into their home.

Pieter, an equally impressive and challenging performance from Alex van Dyk, is the opposite of Janno, a misplaced youth corrupted by the outside world, tortured by demons from his past, and battling to find a voice of reason.

Pieter is a hardened yet sickly teenager with a precocious history of street crime and drug addiction, is an Afrikaner devoid of culture and roots. Wracked by the symptoms of drug withdrawal, refusing to pray with the family or believe in God, the newcomer turns the devout household upside-down.

Pieter understands Janno better than he understands himself, and tears away his beguiled innocence with malicious intent, luring him into the darkness that corrupted his life.

Die Stropers is not a mean-spirited film, but poignantly shows how those living a sheltered existence can just as easily be poisoned by their blissful ignorance, as others growing up in a world polluted by sins of the flesh and toxic depravity.

Kallos’ naturalistic approach gives the film a hushed tenderness that allows the simmering angst and claustrophobic repression of the characters to erupt with vigour, leaving a lasting impression of Janno, a tragic anti-hero who desperately tries to find himself in a world he feels he does not belong, and Pieter, an oppressed castoff, who wants to mould the possibility of a new life.

Kallos delivers a film you feel, the despair, loneliness, longing and desperateness result in an emotional experience you can relate to, reflecting a truth that cuts deep.

There is an honesty in the infolding of the narrative that perfectly captures the essence of being young and imprisoned by cultural idealism and beliefs and shows what happens when the innocence of youth is harvested through wrongful intentions.

The passion and dynamism of Die Stropers is indisputable and offers exceptional discerning viewing, showcasing South African filmmaking at its best.