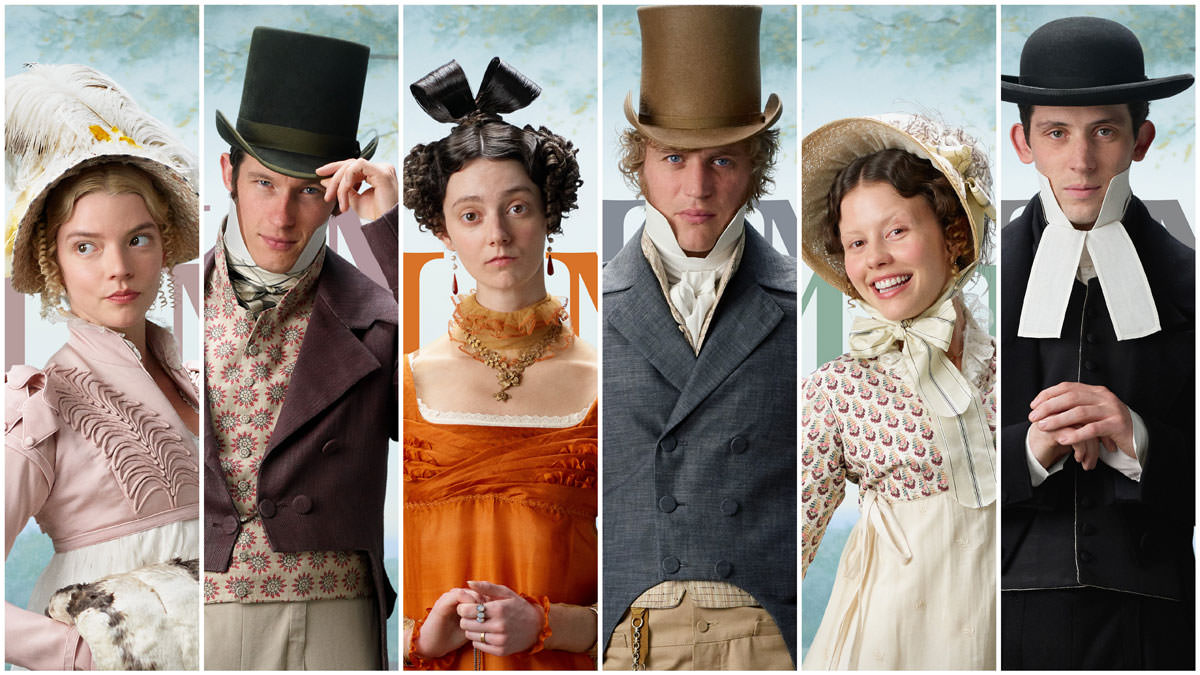 Jane Austen’s beloved comedy about finding your equal and earning your happy ending is re-imagined in this delicious new film adaptation of Emma.

In her touching, funny and beautifully realized feature directorial debut, filmmaker Autumn de Wilde presents a glittering comedic satire of social class and the challenges of growing up, from a screenplay crafted by Eleanor Catton, based on the Novel by Jane Austen.

Handsome, clever and rich, Emma Woodhouse (Anya Taylor-Joy) is a restless “queen bee” without rivals in her sleepy little English town. In this glittering satire of social class, Emma must navigate her way through the challenges of growing up, misguided matches and romantic missteps to realize the love that has been there all along.

The remarkable staying power of the fiction of Jane Austen

Few authors can ever hope to see their work attain the remarkable staying power of the fiction of Jane Austen, whose delightful English tales of manners and romance have left readers laughing and swooning for generations.

Published in late December 1815, Emma was Austen’s fourth novel, and the last to be issued during her lifetime—by the time of its release, she already had penned Sense and Sensibility, Pride and Prejudice and Mansfield Park.

But many consider Emma to be Austen’s masterpiece, anchored by a well-intentioned yet deeply flawed young woman who can be arrogant, spoiled and blind to her own faults. She is a wonderfully complicated heroine who grows over the course of the narrative to become far more self-aware and far less self-involved. For Emma, humility, maturity and happiness are well earned.

But it is not only the novel’s glamorous protagonist that has helped turn Emma into a classic. Austen finds a great deal of humor in her astute observations of the era’s social customs and conventions and she populates Emma’s village of Highbury with a wildly witty and entertaining collection of main and supporting players. The text is rich enough to invite readers back again and again, each time rewarding them with a new discovery. Emma is both a romance and a satire, a vivid depiction of life during England’s Regency period and a comedy of manners.

Emma had been brought to the big screen before—1995’s Clueless updated the story to modern-day, while 1996’s Emma took a more straightforward approach—but the time felt right to revisit the timeless tale.

“Emma is such a wonderful story because it’s the “queen bee” story, it’s the spiky character,” says producer Graham Broadbent, whose company, Blueprint Pictures, partnered with Working Title on the project.

Working Title’s Tim Bevan adds: “I always felt that Jane Austen for romantic comedic source material is second to none. I liked Emma because the protagonist is a bit juvenile at the beginning of the story. She meddles, and although she thinks she is self-aware, she is, of course, not—her journey both as a human and romantically is an enjoyable one. We felt there was room to do it again with a 2020 feel to it.”

Finding the right screenwriter to adapt the novel

In finding the right screenwriter to adapt the book, the producers turned to Eleanor Catton, whose 2013 Man Booker Prize-winning novel The Luminaries, set in 19th century New Zealand, won praise in all corners as a breezy, compelling and richly plotted read. The New York Times Book Review described The Luminaries as “a fiendishly clever ghost story, a gripping page-turner, and a thrilling novelistic achievement.”

Catton had been collaborating with Working Title to adapt The Luminaries for television when she was approached with the intriguing idea of turning her attention to Jane Austen’s Emma. “I don’t think it really sunk in until much later what an incredibly huge deal it was,” Catton says.

“I loved Clueless and had seen a couple of period adaptations of Emma, but I actually hadn’t read the novel before,” Catton continues. “I have read it perhaps five or six times now, and each time I read it, I love it more. I am a formalist at heart, and what I revere most about the novel is its exquisite formal patterning. The plot is like a chess game, with echoes and mirrors everywhere, and yet the story is so human and organic, and so shamelessly enjoyable, that you forget it has been designed at all—until the end. I think it is the best novel ever written in English.”

Catton’s response to the material was so strong, she managed to write a first draft in only three months. “My adaptation of The Luminaries had been a very long time in development, and as a novice screenwriter I had written hundreds and hundreds of drafts of each episode,” she explains. “Emma felt amazingly swift and straightforward by contrast.”

That’s not to say there weren’t challenges. Some of the key characters—namely Emma’s crush Frank Churchill—are off stage until almost mid-way through the story; others, like Frank’s ailing aunt Mrs. Churchill, never appear at all. “This isn’t a problem on the page because an absent character can be described just as easily as a character who is physically present,” Catton says. “But it’s a problem on screen because film is essentially a medium of presence. I had to find a way of clearly establishing the absent characters—Frank Churchill in particular—and making sure the audience was never confused by any of the interlocking family relationships.”

She also wanted to emphasize the friendship between the young women at the center of the story and to give their bond as much prominence as the other couples on screen. “I felt very strongly from the outset that Emma’s relationship with Harriet should be taken seriously and not treated as collateral to the romance,” Catton says. “I also felt very strongly that the film should be funny in homage to the hilarity of the book.”

On that point, she and director Autumn de Wilde agreed, strongly. De Wilde came to the project, her first feature, with wild enthusiasm, having gained a following for her striking photography, her work in commercials for clients including Prada, Uniqlo, Google and Orangina and music videos for artists including Florence + The Machine, The Decemberists, The Raconteurs and Starcrawler.

De Wilde was excited to bring her strong visual style and her sense of whimsy to Regency England. “I have always been obsessed with the fashion, design and the perils of class dynamics in this period as a whole,” the filmmaker says. “The inherent comedy in the passive-aggressive behavior that the pressures of politeness can create provides a never-ending source of inspiration for physical comedy. Jane Austen was a brilliant satirist of small town life in the early 1800s, which is sometimes overlooked due to her delicious talent for weaving unparalleled stories of love and longing.

“I don’t think there’s ever too much Jane Austen,” she continues. “These characters are so human, so iconic, so familiar that the distance we feel in years quickly evaporates as we are reminded of our own flaws. We still remain fools in the fight for love and friendship.”

Although de Wilde might have felt like a somewhat unconventional choice, her original vision for the film and her passion for the novel made her the right person for the job. “We wanted to find a director who had an original take on the material and also would bring a contemporary relevance to it,” says Bevan. “Autumn has a distinctive style both with comedy and visually that felt like it lent itself well to the Emma story. She is also obsessed with the book, which helped.”

Broadbent notes: “Autumn had a wonderful aesthetic sense, which I think you would expect, but when she talked about the story, she gets what I would call the high school prism on it. This is the top girl in the high school who has an in-crowd around her. Who are the outsiders? What is the series of misunderstandings? How do they relate to each other? That is the prism through which she looks at these relationships, and that makes these relationships feel quite contemporary and accessible and fun.”

De Wilde also wanted the film to be very, very funny. “The other element she was very explicit about was the screwball comedy element,” Broadbent continues. “She finds the real comedy of the misunderstandings and extreme behavior. A film she referenced was Bringing Up Baby, and the minute you start to see this film in that world, you’re going, okay, I get it. This is a night out at the cinema, not a night in with my exam books.”

De Wilde took an open collaborative approach to the project, and her infectious spirit helped inspire Catton to take the screenplay in an even more overtly comedic direction. “The script was much less funny before Autumn de Wilde came on board,” Catton says. “Autumn has a huge capacity for laughter, which is a brilliant quality in any creative collaborator—perhaps the most important quality. Most of the best moments in the script came out of trying to make her laugh.”