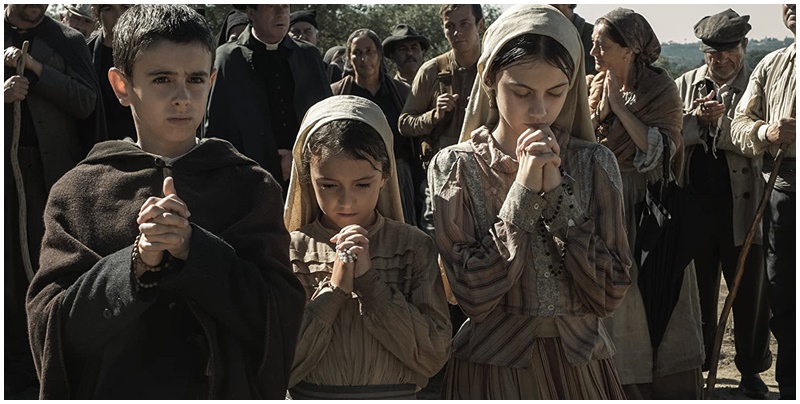 Throughout the Catholic world, the Portuguese town of Fátima is renowned for the miraculous appearance of the Blessed Virgin to three young shepherds in 1917. A small farming district at the time, it became internationally famous for the prophecies the children claimed to have received, making it a revered religious site visited by some six million pilgrims annually. Now, the power of its legacy has brought together an eclectic international group of cinema artists who believe that Fátima’s miraculous message of faith and peace, which galvanized the world over a century ago, is more important than ever.

In the powerful and uplifting film Fatima , a 10-year-old shepherd and her two younger cousins in Fátima, Portugal, report visions of the Virgin Mary, inspiring thousands of believers and angering officials of both the Catholic Church and the secularist government, who try to force them to recant their story.

Producer James T. Volk was originally unfamiliar with the story of Lúcia Santos and her cousins Francisco and Jacinta Marto.

“When I heard about the events at Fátima, I was blown away,” says Volk. “I thought everyone should know about it. A lot of people who grew up Catholic know this story, but someone like me, who grew up in Evangelical churches, is unlikely to be aware of it. This story can be a universal bridge between people of all faiths. The innocence of these three kids helped spread a message of peace and hope to an entire generation. Perhaps it can do that again today.”

As Volk learned more about it, however, he knew he had found a narrative that was perfectly aligned with both his company’s mission and with events unfolding around the world. He and his partner, Dick Lyles, founded Origin Entertainment with the intention of making transformative entertainment that inspires audiences to create a better world.

Volk and Lyles optioned the rights to remake the 1952 Warner Bros. film The Miracle of Our Lady of Fátima, based on the events of 1917 and approached Rose Ganguzza, who has been shepherding indie films to success for almost 20 years, to help produce the film.

“I have been fascinated by the story since I was a child,” Ganguzza says. “At my Catholic school, the nuns would bring out the white sheets and the projectors and show that movie every year. So I agreed to come on but I had very strong ideas about how the script needed to change.”

Ganguzza knew the story needed to be updated for modern audiences and that the film needed to place the events in the context of Western Europe in the early 20th century.

“You can’t tell this story in a vacuum,” she says. “What was happening then is critical to understand. There was huge anti-Catholic sentiment across the Iberian Peninsula. Churches were being closed down in Spain and Portugal and they were hanging priests in effigy. They were in the middle of a military conflict unlike any the world had seen before. Droves of young men were being slaughtered daily. To tell this story like it was told in 1952 wouldn’t work today.”

Natasha Howes was added to the team because of her deep knowledge and appreciation for the story of the children of Fátima. In researching the 2009 feature documentary The 13th Day, which she produced, Howes became an expert on the subject of Fátima, she says. “Part of my role on this film was to ensure that we retained the historical authenticity of the story. I have worked closely with the Shrine of Fátima and key organizations dedicated to disseminating the meaning and message of Fátima throughout the world.”

When it came to finding a director for the film, Ganguzza unhesitatingly suggested Marco Pontecorvo based on the success of his first film, Pa-ra-da, and particularly his skilled work with child actors. Pontecorvo has had a long and distinguished career as a cinematographer, serving as director of photographer on projects as diverse as “Game of Thrones” and the John Turturro comedy Fading Gigolo. He has also directed several Italian television projects, but Fatima is his first feature in English.

Growing up in Italy, Pontecorvo was familiar with the basic story of Fátima. “It’s very wellknown in a lot of Catholic countries,” he explains. “I didn’t know any of the details of Lúcia’s life or about Portugal in that era, so I had to jump into the history. Because it took place at the height of the First World War, the politics were an important element, but I focused primarily on the relationships, particularly between the mother and the daughter, and Lúcia and the Virgin Mary. The triangle is quite interesting.”

With the help of Howes’ unique knowledge and expertise, the filmmakers wove some lesserknown details into the narrative and corrected a number of longstanding misapprehensions. For example, Howes points out that Lúcia’s mother and father have been mischaracterized in previous accounts. “In particular, her mother. She could be quite harsh but she wasn’t a bad woman. According to Lúcia’s memoirs, she was a humble woman devoted to her faith and she just could never believe that her daughter could be so blessed as to experience the Virgin Mary.”

The real Lúcia became a nun and lived in a Carmelite convent in Coimbra, Portugal, from 1948 until she died in 2005 at the age of 97. She left a long legacy for the filmmakers to draw upon, including two volumes of memoirs.

“We recognized that there was an incredible story behind this miracle, the story of the children and their experiences of the Virgin Mary, as well as their ultimate persecution within their homes and their local communities, by the government and the Church,” says Howes. “But they all remained true to their mission, even after their abduction by the authorities and interrogation under the threat of death. Whether they truly experienced the apparitions or not, whether the miracle happened or not, we continue to relate to Lúcia and her quest.”

Fatima, says Volk, is exactly the kind of film he had in mind when founding Origin Entertainment. “Inspiring people to work toward a better world is a tall order for a movie,” he acknowledges.

“But the message of this movie really fits with our intentions. One of its key messages is a call to pray for peace. At the time, World War I was raging. People were killing one another in numbers that were previously unheard of. The message delivered by those children was to turn from those evil ways and come back to God to heal their land. It’s a message that applies as much today as it did then.”

Volk is impressed at Pontecorvo’s ability to tell the story in a way that allows believers and nonbelievers to consider its messages. “He did a phenomenal job threading that needle,” says the producer.

“The audience can take away what they need from what happened. It is undeniable that tens of thousands of people saw something miraculous in the meadow that day, something that they couldn’t explain. And because it can’t be explained, there are also people who don’t believe. Marco was sensitive to both points of view and told a beautiful story very simply.”

Pontecorvo hopes that whether or not audience members see the divine in the events at Fátima a century ago, they will find elements in the story that resonate powerfully today. “Believers and nonbelievers can find something in this film,” he says. “It carries a universal message of peace — the idea that we must all change our behavior to end violence and the madness of war. But it also a human story about the struggles of a young girl, her relationship with her mother, and how the questioning of faith can lead to an even stronger faith.”

Pontecorvo directed Fatima from a screenplay by Pontecorvo, Valerio D’Annunzio and Barbara Nicolosi

Born in Rome, writer-director Marco Pontecorvo is an Italian citizen who also speaks English, French and Spanish. At the beginning of his career, in the mid-1980s, Pontecorvo worked as a clapper loader, focus puller and camera operator for documentaries, commercials and feature films. He has extensive experience directing for international television. Pontecorvo and Oscar winner Pasqualino De Santis (Romeo and Juliet) shared in an Italian Golden Globe Award for their lensing of Francesco Rosi’s The Truce, starring Turturro. He has served as cinematographer on 29 feature films and a number of acclaimed documentaries, shorts and commercials. A highly respected and versatile director of photography, Pontecorvo has worked with famed directors such as Michelangelo Antonioni, Richard Loncraine and Martin Scorsese (second unit cinematography, Gangs of New York). He has shot such major feature films as Firewall, starring Harrison Ford; My One and Only, with Renée Zellweger; The Last Legion, starring Colin Firth; Letters to Juliet, with Amanda Seyfried; and Fading Gigolo, starring Turturro. Pontecorvo’s television director of photography credits include three episodes of “Game of Thrones” and nine episodes of “Rome,” both for HBO.

Writer and director Valerio D’Annunzio won the prestigious Flaiano Prize for the best text with the script Iter in 2005. His first feature film, Aria, of which he is a screenwriter and director, received recognition in several Italian and foreign festivals. He has written many successful Italian dramas. He has worked and still works on several international projects (The Root of All Evil, Publispei and Keshet Production, Israel; Falling Beauty, Ad Line Production, France; Fatima, Origin Entertaiment USA; Roman Nights, Rose Production USA). He is now working on a tv series for Amazon Original and is co-writing a project for RAI and France Television.

Originally from Portsmouth, Rhode Island, Barbara Nicolosi is the Founder and Chair Emeritus  of Act One, Inc., a nonprofit program to train and mentor Christians for careers as Hollywood writers and executives.   Barbara is a member of the Writers Guild of America-West and has written screenplays for several Hollywood production companies. Her most recent credit is as a co-writer with Benedict Fitzgerald on the 2013 Lionsgate release, Mary, Mother of the Christ.   She also completed Polosuasion, a contemporary resetting of Jane Austen’s Persuasion for IMMI Pictures of Beverly Hills.  She wrote Fatima: Message and Miracle about the events that that took place in Fatima, Portugal in 1917, for Origin Entertainment of Manhattan Beach, CA, and is currently working on Theotokos, a story of the early Church for Panaghia Productions of Marseilles, France.