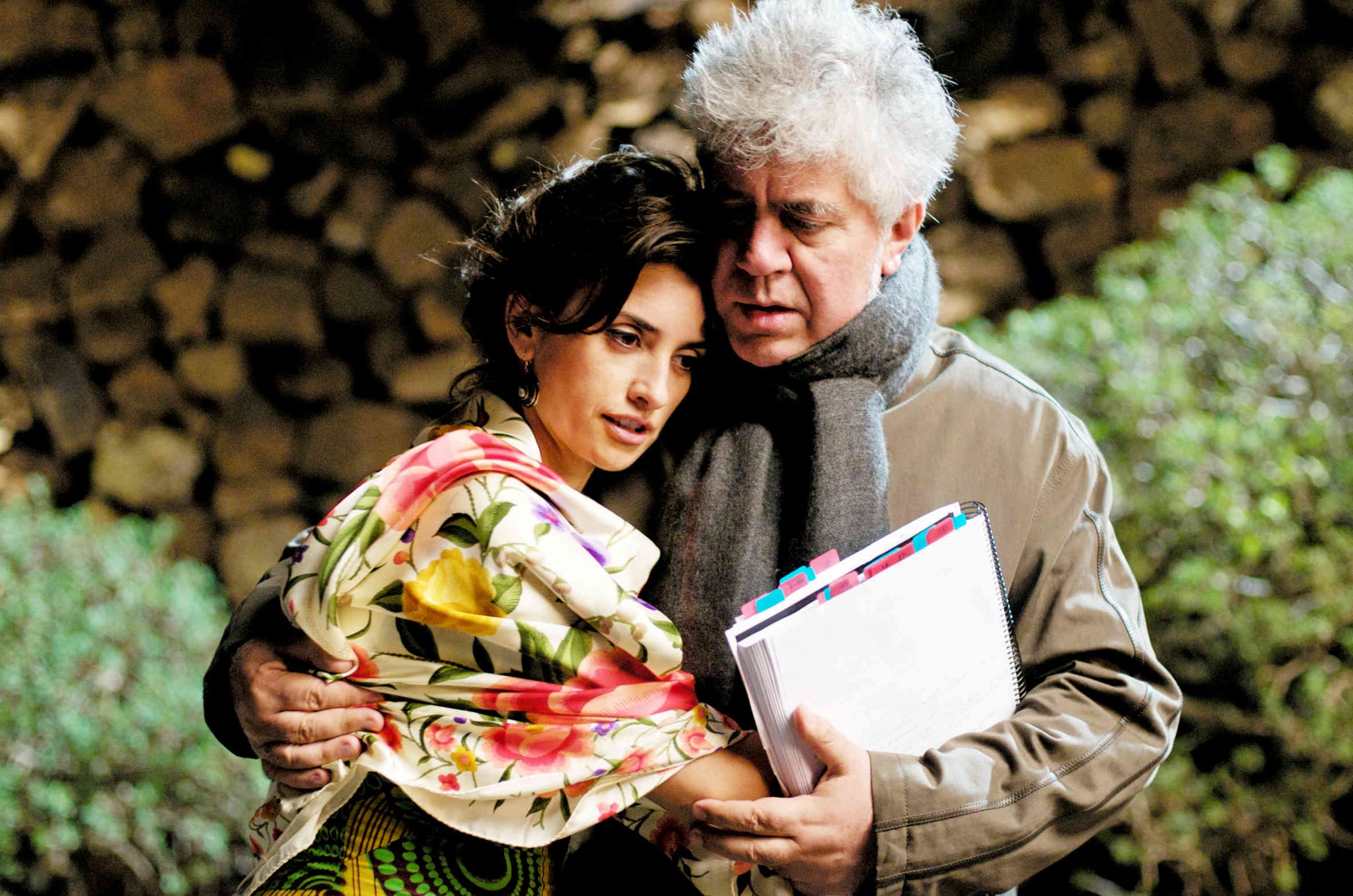 Now in his fifth decade making movies, Spanish writer-director Pedro Almodóvar is still pushing himself to explore new directions in his art while at the same time staying true to his playfully provocative roots, exploring the nature of Spanish identity. He originally floated the idea for his latest film Parallel Mothers to Penélope Cruz when promoting All About My Mother over 20 years ago.

Parallel Mothers offers Pénelope Cruz another complex role as Janis, a photographer interested in uncovering the truth about her family history at the same time as she prepares to welcome a child into the world. Complicating Janis’s present and future is Ana (Milena Smit), with whom she crosses paths at the maternity ward. Their melodramatic and psychologically fraught relationship takes on an atypically reflexive bent for Almodóvar, who utilizes it to explore both the historical origin of his artistic obsessions as well as the traumas that have gripped the nation that made him.

Almodóvar discussed the theme of the two mothers when he wrote the first pages two decades ago, and he completed the first draft in 2009.

With the exception perhaps of Pain and Glory, Women on the Verge of a Nervous Breakdown, and The Flower of My Secret, which I wrote in about three to four months, the rest of my films takes a really long time to concoct, which has really become my preferred way of working,” says Almodóvar. “I have one idea, and then I write 10 or 15 pages immediately at home. I put it on the computer, and if the story still interests me, then I start taking notes over one year. And then when I have like 100 pages of notes, I write the first draft. I have many stories in this form. So, after making the movie that I’m doing, I always go back to these stories and continue working on them. For example, Talk to Her and Bad Education are the films that took me the longest to write because I worked on the structure until I found the thing that made the whole thing click.”

Almodóvar completed the screenplay for Parallel Mothers during the pandemic lockdown. “I just needed to fill my time with an activity that consumed me completely, he says. “One of the things that I do to consume time is write, and so I went back to the script of Parallel Mothers. It was not so much that the thematic elements sort of coincided with the time period. It had nothing to do with death or with any of these things. It was really the fact that I actually had the time to fully concentrate on the script and to be able to begin to resolve some of the issues with a script that I did not like. The part about historical memory was in the script from the first draft, as well as the relation between the two mothers.”

Two women, Janis and Ana, coincide in a hospital room where they are going to give birth. Both are single and became pregnant by accident. Janis, middle-aged, doesn’t regret it and she is exultant. The other, Ana, an adolescent, is scared, repentant and traumatized. Janis tries to encourage her while they move like sleepwalkers along the hospital corridors. The few words they exchange in those hours will create a very close link between the two, which by chance develops and complicates, and changes their lives in a decisive way.

“I grew up surrounded by women: my mother and all our neighbours. Even when my mother couldn’t be with us and needed us to be taken care of, she would take us to the neighbours. All throughout the ‘50s and ‘60s, I grew up surrounded by women,” says Almodóvar. “I think of all the female characters I’ve written and being inspired by these women and their stability to overcome anything. By their ability to fight and by their strength. However, I think the big difference in Parallel Mothers is that these are contemporary mothers. These mothers are not mothers that have resonances, say, to my own mother. One mother is a very conservative mother. Then you have Ana, who’s a very young woman with a new maternity linked up to the tragic story of her rape. And then you’ve got Pénelope’s character, a contemporary mother and a single mother who has to really struggle to balance her role as a mother and as someone who has to sustain a family.”

For Penélope Cruz, playing Janis has been a real tour de force. During a large part of the film her character moves with a double intention. All her actions are determined by the contradiction in which she lives and by fear. This contradiction is very difficult to play, especially because Ana fits perfectly into her new role and becomes an adorable being for her daughter and for the mother, which increases her sense of guilt.

“This was actually a difficult role for Pénelope,” says Almodóvar, who has a very deep relationship with Penélope Cruz as a friend and as a director “I have a lot of faith in the fact that she’s going to give me everything I ask for and everything I need in order to be able to fully inhabit the character. This particular character was not a natural one for her to play. Pénelope is a very different kind of mother. In fact, she had a really hard time arriving at and being able to come into contact with the more conflicted and guilt-ridden areas of the character. But I again had the trust and faith in her that she would be able to play a character that in no evident way was made for her.”

What unites the two characters is the sense that they both want to form a family. They’re also both orphans. One’s an orphan because the mother doesn’t pay any attention to her, and the other one is an actual orphan.

“So, there’s this sort of double-edged purpose,” says Almodóvar “On the one hand, I wanted to bring visibility to the issue, the problems, and the pain that the relatives who are looking for their loved ones are undergoing. I wanted to shine a light on that. At the same time, I wanted to speak to the young generation represented in this case by Ana, who needs to not only appreciate what the past is but also understand where their families were at the time of a conflict. To come to understand their own place in the world as well as the problems that they’re inheriting that will affect them from this point moving forward. I think you should know the history of your country and family. And, also, the darkest part of that history, because it’s the only way that you can overcome, move forward, and not repeat the same mistakes.”

I admit that I am fascinated by Janis’ complexity and determination. Halfway through writing, when the characters are already alive, at times they become independent of the author, and he can only put himself at their service like a notary or a medium. It is a part of the gestation of the script that, when it happens, always in the second or third draft, subjugates me. This part of the writing process is very mysterious and difficult to explain. It happened to me with Janis. I think that her situation is the most difficult one in which I have put any character until now (along with that of Elena Anaya in The Skin I Live In). The originality and darkness of her situation made it difficult to offer Penélope Cruz any references that existed in real life. Directing her has been a meticulous process where I needed her to surrender herself to me as if in a state of hypnosis. I contained the flood of tears, Penélope is very emotional and she would have been crying from start to finish, and she knew how to replace them with the exact amount of guilt and shame, in a state of constant alarm.

Once again, José Luis Alcaine has known how to capture the colouring that I felt was right for the film. The sun is very present, through the windows that look out on the protagonist’s square. A very luminous photography for a sombre story.

Alcaine comments on his work: “We tried, using very high diaphragms (almost everything is shot between f:16 and f:22) to have the actors who appear on the screen in the foreground, middle ground and even background, always in focus. I also wanted to take in the total view of the sets, which gave us an in-depth mise-en-scène and the spectator can turn their eyes to the character, set or detail that most attracts them. Everything is interacting and I think that the spectator, thanks to the increase in visual information, feels in the middle, almost participating in the story. I think that these diaphragms make it possible to create a certain sensation of relief. This approach is very different from what is being done today, but I think that in this way I obtain a greater visual immersion in Pedro’s world.”

Alberto Iglesias has undertaken to dress the story musically and, once again, I have been surprised by his ability to dialogue with the silences and the words, the actions, and the glances of the characters. I prefer that he explain it himself:

“I started with the most complex sequence when Janis receives the news from the Labgenerics laboratories on the computer. It’s a sequence that forces the music to involve itself in the cinematic substance, in the narrative instant. The close-ups could suggest a musical writing that was not very dense, with few instruments. It is the first thing I thought. However, hearing Penélope’s unsteady breathing, her anguish and her resistance to accepting the results (and her subsequent concealment) provoked a sphere of denser, more complex sound.”

“There are other thematic elements that appeared as I advanced. They gradually thread together and recall not only that classic cinema sound but rather the kind of music that I have done for other films by Pedro. A more emotive character in some cases and in others with a more hypnotic ambition, because of the repetitiveness, and a taste for unpredictability. In every case, they are always a mirror of what is happening to Janis, like a piano accompanying a singer, waiting for her, inspiring her and falling silent so as never to reveal more than what her eyes tell us. This is a film full of eyes that look, not only the actors, also the photos that seem to be looking at us. And the doors, there are lots of times when the actors open a door and are faced with a surprise, anticipation, disappointment, or grief. Musical accompaniment is associated naturally with the editing, starting at the beginning or end of a phrase, they are very functional but not very obvious synchronic elements that seek naturalness and fluidity.”