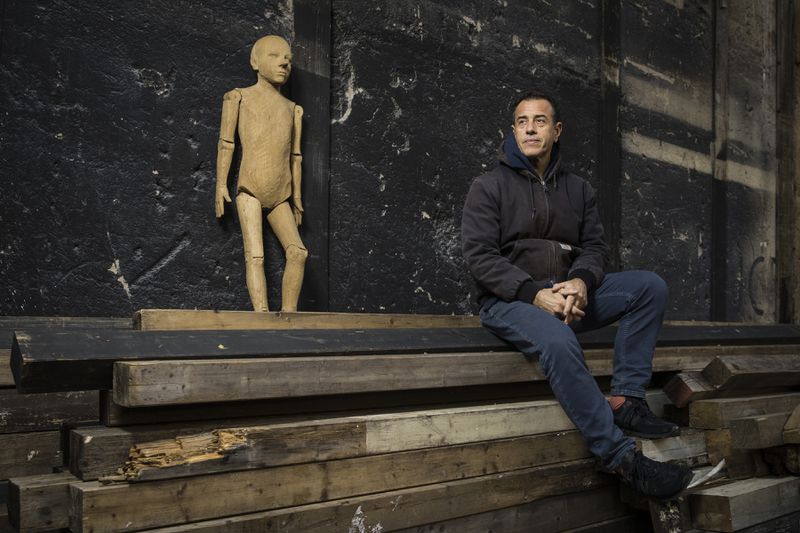 Italian writer-director Matteo Garrone felt he could bring something new to audiences with his live-action version of Pinocchio, he did a a storyboard for the character when he was just six years old.

Matteo Garrone, a filmmaker more commonly associated with hard-hitting, stark fare such as Gomorrah (2008) or Dogman (2018), and the fantasy Tale of Tales (2015), returns to the fantasy genre, retelling of Carlo Collodi’s iconic 19th Century fairy tale, returns to the roots of the original story, creating a fantasy world in the Italian countryside. It is a love story between a father and a son, but it is also a story that speaks about redemption.

When an old woodcarver named Geppetto (Roberto Benigni) creates a puppet out of wood, something magical allows Pinocchio (Federico Ielapi) to talk and walk, leading him to one misadventure after another on his way to becoming a real boy.

Q & A with Writer-Director Matteo Garrone

Matteo Garrone is a two-time winner of the Grand Prix at the Cannes Film Festival for Gomorrah (2008) and Reality (2011), and remains one of Europe’s most prominent directors. His epic fantasy Tale of Tales premiered In Competition at Cannes 2015, starring Salma Hayek, Vincent Cassel, John C Reilly and Toby Jones. His last film Dogman premiered In Competition at Cannes 2018 and won Best Actor at the festival for lead Marcello Fonte.

When something like this comes your way, do you get excited about retelling Pinocchio, or do you hesitate about doing another telling of a story that’s been told so many times?

It’s true that it’s had many adaptations. At the same time, when I read the book again, five or six years ago, I discovered that there were many, many things that I didn’t know that surprised me. So, I thought that we could make a new version of Pinocchio that was really faithful to the original book, and Collodi’s original masterpiece. That could be something new for the audience like it was for me reading the book.

At the same time, now we are lucky that we can make incredible things with special effects, so it could be the best Pinocchio live-action, where Pinocchio could be a puppet with special effects. Pinocchio has been a part of my culture and a part of my life. I made my first storyboard of Pinocchio when I was six years old. I wanted to tell the story in a way that for sure would be different from other directors at other times. We worked a lot on research, and on paintings and illustrations, and we tried to make a movie that was really close to the original story of Pinocchio.

You kept that storyboard you did of Pinocchio for all of these years? How did you end up hanging onto that for all of this time?

Because when you are a kid, you are pure. I hung it in front of my desk because it’s one of the first things I’d done. Also, it was one of the first times that I was starting to develop a story with image. It’s something that’s a model for me. When you are young, you are naive, and then when you grew up, sometimes you lose that simplicity. So, it’s always in front of me, for that reason.

Due to the fact that you are familiar with this story since childhood, is Pinocchio a more personal project?

In a way, all of my movies are personal. I always find some connection between me and the character. I need to love the character whose story I tell. Often, the character has done something wrong, but I need to understand why. Sometimes they are weak from the temptations of life. I grew up loving Pinocchio for his desire to have fun and to escape from responsibility. And then I became Geppetto because I’m the father of an 11-year-old son, and he is one of the millions of Pinocchios around the world.

Pinocchio is different because it is a coming together of Tale of Tales with my filmography. The love I feel for Pinocchio isn’t love at first sight. It’s a character I’ve always been drawn to, and many have noticed his influence both in Gomorrah and Reality

What was it that originally made you want to be a storyteller? How did you realize that it was a career that you wanted to pursue?

When I was a kid, I loved making drawings, so I wanted to be a part of the artistic world. And then, I grew up and became a painter. Before I became a painter, I was also a tennis player and I wanted to become a professional tennis player. I had those two passions – drawing and painting, and tennis. Then, when I was 19 or 20 years old, I discovered that I couldn’t be a champion of tennis like I wanted, so I decided to dedicate my life to painting and I became a painter. When I was 26, by chance, I made my first short movie. My background is as a painter, so I grew up looking at paintings in museums. I don’t paint anymore. It’s been more than 20 years since I painted, but I don’t miss it. I don’t need it because I’m making movies.

How long have you been trying to make this film?

The idea came to me around five years ago. After Tale of Tales, I wanted to make another movie based on a fairytale, and so I read Pinocchio for the first time. My mother used to like to tell me fairytales, and I made my first storyboard of Pinocchio when I was six. When I was eleven or twelve, I saw the television version of Pinocchio. By then, the story of Pinocchio was like anew. Five years ago, for curiosity, I wanted to read the book. By reading it, I discovered so many things that I either didn’t remember or didn’t know.

What do you think marks your iteration different from the others?

I am happy that we have made this project in Italy. It is a very universal story, but it is also very Italian. I know that there will be many other adaptations of Pinocchio in [the] future but, because we are Italian, I’m sure they will be very different from ours. Americans will probably have another vision. I am sure [Guillermo] del Toro will have another approach. [Robert] Zemeckis and del Toro are two great directors, so I’m sure they will do something very interesting, but we are very confident that what we have done something that they cannot.

What approach did you take in bringing Pinocchio to the big screen?

We have built a world where realism and supernaturalism mix. I went and rediscovered the original text and the first drawings by the illustrator Enrico Mazzanti. I researched paintings of Italy of that period; looking at the poverty, the farming community and the villages. Roberto Benigni comes from that part of Italy. He grew up 20km away from where Pinocchio was born. He is the son of a farmer; he was very poor. He brought his world [to our film]. He was an incredible gift to the movie and he made this adaptation very respectful of the original book. That’s why I think the movie will be surprising for audiences around the world.

You and Roberto Benigni have known each other for a very long time then. Why is it only now that you are working together?

First of all, I’ve been a friend of Roberto’s for a long time, but we decided to work together on this project by coincidence. It was something that happened one night, when we were having dinner, by coincidence. I was already working on Pinocchio, and during dinner, his wife said to me, “Roberto could be an incredible Geppetto,” and I said, “Yes, I know.” I knew that he had already made a version of Pinocchio, so I didn’t want to ask him because I thought he wouldn’t be interested in doing another Pinocchio project. But when she said he could play Geppetto, I asked him.

Roberto is Geppetto. Roberto comes from Tuscany. Roberto comes from a family that was very poor and he grew up in poverty. The story of Pinocchio talks about poverty and it talks about Tuscany. It’s set in Tuscany in a period when there was a lot of poverty. Roberto is also one of the best actors in the world, that can play dramatic and comic roles. Geppetto is a character that sometimes is comic and sometimes is dramatic. He has been very generous to work with me on this project and we had such a great time together. We loved it. I loved it, and I know that he loved working with me. I’m very grateful to him.

Do you think that your version is suitable for young children?

There are some parts of the story that are dark, but these parts are necessary as a warning to kids as to how dangerous life can be. And how cruel it can be also. It is important to be careful and follow the warnings of the adults. This is something that is very important in the story. The movie was released at Christmas in Italy and was a huge success. Kids saw something new, visually, and at the same time, they found an authentic empathy for puppet because he was one of them. For the adults, it was an opportunity to go back to their childhood for a couple of hours. It’s a movie that ends with light. It is a love story between a father and a son, but it is also a story that speaks about redemption.

It’s not just the wooden Pinocchio that’s a different kind of character, but you have various creatures in this film. What were the biggest challenges of this production?

There were many big challenges on this project. First of all, it was challenging to show a Pinocchio that could surprise the audience and be unaffected. The second big challenge was to reach the audience of the kids. We know that kids now see lots of big movies with special effects, so it’s not easy to catch the attention of kids with a movie like this. We were always thinking about the kids in the audience. I knew that adults could love the movie, but the bigger challenge was to reach the kids and to make a movie that could be for both kids and families. We had lots of prosthetics, especially for Pinocchio. Because the main actor (Ielapi) was a kid of nine years old who had to sit for four hours of make-up, every day for three months, it was an incredible effort from him. He was really brave and strong, and also a very good actor. He played a Pinocchio that was completely the opposite of him in life. He was really incredible on this project.

Do you know what the next film is that you’re going to be doing? Are you the kind of filmmaker who’s always working on something?

I always like to have new challenges. I like to get myself into trouble when I make a movie. I like to do something new. At the moment, I don’t know which will be my next project, but I’m looking for a new idea and a new challenge. In this difficult moment, I’m reading and looking for a new idea, but it’s not easy to find a new idea. I want to find an idea that really excites me, for my next movie, but I’m not in a hurry.