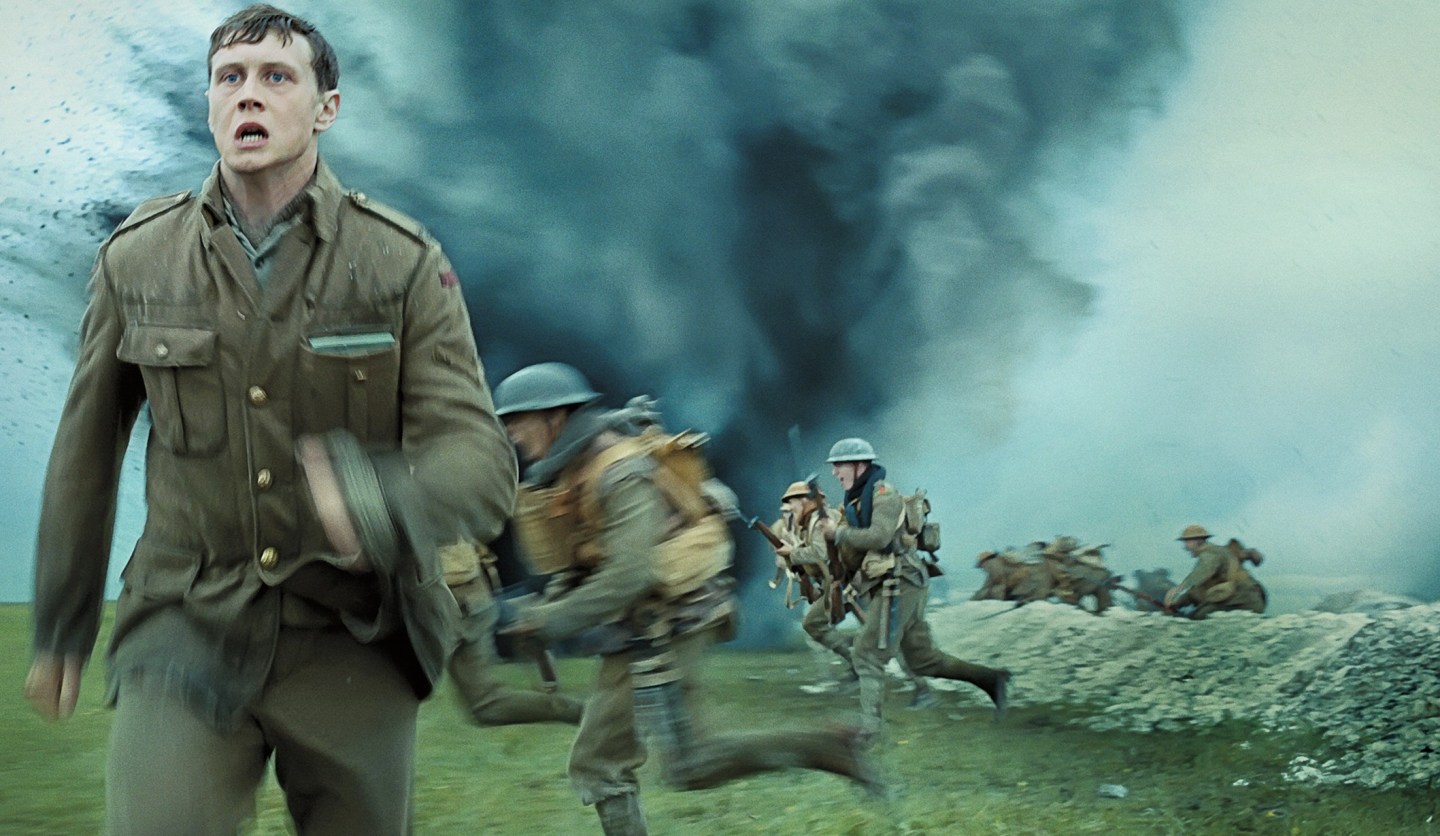 As the driving force behind the successful independent training initiative The Writing Studio and a published film and theatre journalist of 40 years, Daniel teaching workshops in creative writing, playwriting and screenwriting throughout South Africa and internationally the past 22 years. Read more

There are films that impact on our lives, when the action on the screen and the reaction in our minds unite, film happens. 2020 marked the year that saw the collapse of cinemas internationally, the rise of a digital age where films were streamed virtually, and the rebirth of independent filmmaking.   It also marked the year of some great films. Here are noteworthy films, streamings and series of 2020, the year our world changed, where the fictional reality of stories enriched our lives.

The world has been at war on film for more than a century and many war stories had a lasting impact on our lives. This momentous masterwork from director Sam Mendes not only showcases the art of filmmaking at its best with the teaming of Mendes and cinematographer Roger Deakins, but also captivating storytelling from Mendes as screenwriter who co-wrote the story with Krysty Wilson-Cairns. Inspired by true events, it takes us into the lives of two ordinary soldiers whose instinctive heroism saved many live. It features a magnificent performance from George Mackay who takes on the heart wrenching journey of an ordinary young man whose extraordinary heroism shows how kindness defeats cruelty. One of greatest achievements was that it took its audience on an unheeded, continues journey, an uninterrupted visceral cinematic experience. We merged with a story that poetically reflected our lives in times of adversary, and how belief and faith saves us from hopelessness. Read more

Social satire at it best and most shocking, BONG Joon Ho’s tragicomedy is a genre-defying tale of class warfare, about the state of today’s society, and the impossibility of people of different classes living together in a symbiotic relationship. Its magnificently plotted story shows what happens when a dirt-poor family set their sights on a super-rick family and plan to infiltrate their domain (and status). It’s understandable why it wowed the Oscars, winning Best Film Not in the English Language, Best Original Screenplay, and also became the first non-English film to win the Screen Actors Guild Award for Outstanding Performance by a cast in a Motion Picture. Read more

The artistry of filmmaking and the potency of storytelling shine radiantly in Robert Eggers’ mesmerising black and white masterwork, who co-wrote the screenplay with his brother Max Eggers. A lighthouse on a mysterious New England island in the 1890s imprisons two men, a young man who arrives as a lighthouse keeper to assists his elderly supervisor, as days pass, they try to maintain their sanity.  With an orthochromatic aesthetic this haunting psychological thriller evokes 19th-century photography, as well as a nearly square 1.19:1 aspect ratio that corresponds to narrow sets and seeks to withhold information from the audience. If there’s one other reason to see this film, it’s for the magnificent performances delivered by Willem Dafoe and Robert Pattinson. Read more

Visionary writer-director Terrence Malick masterfully shines the spotlight on humanity with this tragic true story of Franz Jägerstätter, an Austrian peasant farmer born and raised in the village of St. Radegund, who refused to take the oath of allegiance to Hitler during World War II, sacrificing everything, including his life, rather than to fight for the Nazis. It’s a poetically inspired journey into the heart and souls of the characters, with top notch performances from August Diehl, Valerie Pachner, and Matthias Schoenaerts with both Michael Nyqvist and Bruno Ganz in their final performances. Malick avoids conventions and always finds new ways of storytelling, giving the actors a large amount of freedom to experiment, as well as cinematographer Joerg Widmer, a long-time collaborator with Malick, to be equally open to creative possibilities. Read more

5. True History Of The Kelly Gang

This retelling of one of Australia’s most infamous 19th-Century outlaw is brutal, shocking, anarchic, strangely beautiful, but above all, excellent. It shatters the mythology of the notorious icon to reveal the essence behind the life of Ned Kelly and force a country to stare back into the ashes of its brutal past. It’s a provocative and exciting freewheeling romp, peeling away the armour and helmet to show the iconic outlaw Ned Kelly as a deranged and misunderstood product of his time. Homoeroticism blends with a punk aesthetic to produce a feast of firearms and fun. The film powerfully explores the blurred boundaries between what is bad and what is good, and the motivations for the demise of its hero. Youth and tragedy collide in the Kelly Gang, and at the beating heart of this tale is the fractured and powerful love story between a mother and a son. Directed by Australian filmmaker Justin Kurzel, and written by Shaun Grant, it features a mind-blowing performance from George Mackay (who starred in 1917), with great support from Nicholas Hoult, Charlie Hunnam and Russell Crowe. Read more

After a 6-year’s journey from page to screen, René van Rooyen’s insightful adaptation of Dalene Matthee’s novel Toorbos as a screenwriter, and her astute visual sensibility as a director, delivers an inspirational journey of the heart that showcases the best of South African filmmaking and is officially this year’s South African entry for the highly coveted Best International Feature Film Award for the 2021 Academy Awards. It tells of an historical event in South Africa, which affected the last forest inhabitants of South Africa’s Knysna forest in the 1930s. Read more

The Griekwastad-murders were immortalised in the absolutely superb Griekwastad, with a well-crafted screenplay by Tertius Kapp and first-rate direction by Jozua Malherbe. The film tells the story of the cruel acts which shook the world to its core in 2012, South African actor, Arnold Vosloo, delivered a strong performance as the investigator and a chilling performance from Alex van Dyk (The Harvesters/Die Stropers) as the son who is the only survivor in brutal farm murder. Read more

Celebrated filmmaker, screenwriter and playwright Christiaan Olwagen brings Poppie Nongena to life on film, telling the story of a South African isiXhosa mother, whose life revolves around finding stability for her family when she is deemed by the law to be an illegal resident in her own country. Read more

One the most inspirational film festivals of the year was the Koos Roets Film Festival that took place at The Showroom Theatre in Prince Albert in the heart of the Karoo, 10 films were screened during the weekend of 18 December, featuring some of Roets’ latest films like Faan se Train, to classics like from the 70s, Vlug van die Seemeeu, Die Sersant en die Tigermoth, Kootjie Emmer and Erfgenaam.

Live streaming exploded in 2020 and was the saving grace for many seeking escapism in the safety and comfort of their homes.  The Met Opera in New York deserved a medal for streaming almost 300 stupendous operas since lockdown began in March, ranging from classic telecasts to 2019 stagings, enriching our lives with soul-enriching music.  Read more

There was also an explosion of live musicals that were streamed: Funny Girl, 42 Street, The King and I, Carousel, and Take Me to the World: A Sondheim 90th Birthday Celebration

There were four highlights in 2020:  My Octopus Teacher documented a year filmmaker Craig Foster spent forging a relationship with a wild common octopus in a South African kelp forest.

The British doccie David Attenborough A Life On Our Planet, served as a “witness statement”, through which Attenborough shares first-hand his concern for the current state of the planet due to humanity’s impact on nature and his hopes for the future.

Kiss the Ground made the case that by regenerating the Earth’s soils, we can balance the climate, replenish the water supply, keep species off the extinction list and better feed the world, and The Social Dilemma explored the dangerous human impact of social networking, with tech experts sounding the alarm on their own creations.

Sarah Paulson was brilliant in Ryan Murphy’s Ratched as a young nurse at a mental institution becomes jaded and bitter before turning into a full-fledged monster to her patients.

after the defeat of the Empire at the hands of Rebel forces, a lone bounty hunter operating in the Outer Rim, away from the dominion of the New Republic, goes on many surprising and risky adventures in Jon Favreau The Mandalorian. Read more