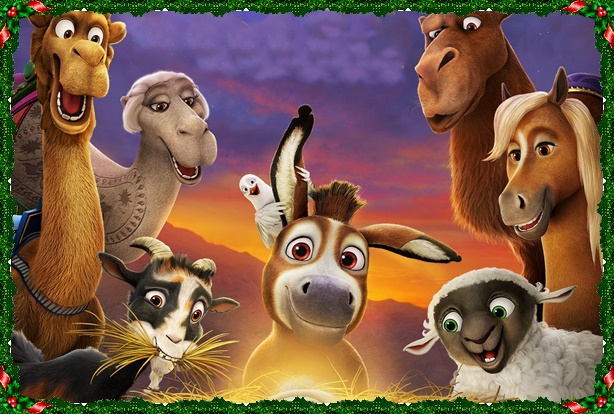 Greatness comes in the most humble appearance, which is the message of the Christmas story itself.

How do you tell one of the most famous stories ever recorded and bring it to the screen in a fresh, new way?  This was the challenge facing the filmmakers behind The Star, Affirm Films and Sony Pictures Animation’s family film about the events leading up to the very first Christmas.

“It’s the Nativity story from the point of view of the animals, and in this film, we follow Bo, who is the donkey that carries Mary and Joseph to Bethlehem,” explains director Timothy Reckart. The story is by Simon Moore and Carlos Kotkin; and the screenplay is by Carlos Kotkin

“We looked at it as the greatest story never told,” kids executive producer DeVon Franklin.  Having previously produced the faith-based hit Miracles from Heaven and overseen the blockbuster Heaven Is for Real as an executive at Columbia Pictures, Franklin was inspired to translate the meaning of the story beyond the literal telling into a journey about the choices we all make in our daily lives that have an impact and, eventually, fit into the framework of the human story at the heart of it all. “It says a lot about teamwork, stepping outside of their own somewhat narrow perspectives and working together.  Our hero, Bo the donkey, needs all of the other animals to help to become successful.  It’s also about hope—you’ve got to believe in the impossible for it to happen.”

In The Star a small but brave donkey named Bo yearns for a life beyond his daily grind at the village mill. One day Bo finds the courage to break free and ends up befriending newlyweds Joseph and Mary. Mary’s kindness soon sets Bo on the adventure of his dreams. On his journey, he teams up with Ruth, a loveable sheep who has lost her flock, and Dave, a dove with lofty aspirations. Along with three wisecracking camels and some eccentric stable animals, Bo and his new friends follow the Star and become unlikely heroes in the greatest story ever told – the first Christmas.

“It’s about how something that seems small can be bigger than it looks on the outside.  Bo has been looking to do something important, and he starts seeking that in a self-aggrandizing way,” says Reckart.  “Along the journey, by doing a small thing – helping these two people, which, for all he knows, are just some random couple – he winds up doing the most important thing he could ever achieve.  Greatness comes in the most humble appearance, which is the message of the Christmas story itself.”

It was the world’s familiarity with the story that excited the director.  “Most people have some knowledge of it, and that presents a wonderful opportunity,” says Reckart.  “Of course, the challenge is that people may feel that they know the story, they’ve seen it. But we can make the most of it by letting some of those elements take place off-screen, and look at what might have been going on in the background, or ask questions like ‘What were the camels doing at that moment?’  That awareness of the story allows us to veer off into the corners and shine a light on other things going on and tell new stories in the midst of the familiar.”

Academy Award nominee Timothy Reckart makes his feature directing debut on The Star. Timothy first drew attention with his thesis film at the National Film & Television School in the U.K., Head Over Heels, about a long-married couple who have literally grown apart, with the wife living on the ceiling of their house and her husband living on the floor. Head Over Heels had a very successful run in festivals, which ultimately brought the film an Oscar® nomination and an Annie Award win for Best Student Film. Timothy is a graduate of Harvard University with a degree in History & Literature. He has also obtained a Master’s Degree in Directing Animation from the National Film and Television School.

“We found opportunities for fun and invention,” says Franklin.  “Audiences aren’t coming for the documentary or the historical exposition – they’re coming for enjoyment and creativity.  I think we found ways to present Mary and Joseph as recognizable characters who laugh, who are afraid, who find themselves at the center of this amazing story and display their humanity throughout it all.”

“Watching this cast work was really inspiring.  The thing that really surprised me was how each of these artists approached their particular roles,” says Reckart.  Oprah Winfrey, Tyler Perry, and Tracy Morgan all became the perfect counterpoints to each other – Tyler as the self-appointed leader who thinks he’s smarter than he actually is; Tracy as his belligerent, hilarious brother; and Oprah as the wise camel who is the only one who may actually see what’s going on.  Kelly Clarkson plays her sleep-deprived horse in a way we can all recognize – like it’s 2 a.m., you’re hanging with your friends, and suddenly everything is hilarious in a way it isn’t in the mid-afternoon.  The actors all made these characters leap off the page.”

Steven Yeun of “The Walking Dead” brings to life this little donkey with a big heart.  “Even though Bo is in a pretty dire situation, he’s pretty hopeful,” he says.  “He has really large dreams.  But as his plans start to go awry, he starts to doubt himself and take back all of that ambition he started with… but the universe will tell him in other ways that he’s just as important as he ever thought he was.  He finds something within himself bigger than anything he ever imagined.”

It’s a role that Yeun could recognize.  “Bo is an underdog,” he says.  “He sometimes puts limitations on himself.  I saw that in myself – I was an immigrant to this country, and there were limitations that I would place on myself based on what I saw.  Bo comes to a full realization that he has much more potential than he thinks he has, and that’s something I very much relate to.”

“I think Bo is a lot like us,” says Reckart.  “He’s a character that dreams of doing something remarkable, and he knows in his heart that he’s meant to do something great.  I feel everyone has a conviction that they are here to do something, that they’re here for a reason.  Bo’s just trying to figure out what.  He starts out with a mistaken idea of what that is, but through his journey, he finds his purpose.  On top of everything else that this story does, I feel that drive and that individual search for purpose will resonate with everyone.”

Golden Globe winner Gina Rodriguez, the star of “Jane the Virgin,” plays the role.  She says that while you might think it would be intimidating to play a role like Mary, she turned for inspiration to the greatest role models in her life.  “I think Mary’s strength exists in all women, so I pulled from my own life, from the women around me who show that kind of strength every day,” she says.  “I played her like the way my mother walks and talks, and the way my sisters are with their children.”

Rodriguez was also inspired in her performance by her grandmother’s faith.  “I’ve been researching this role my whole life, growing up in a very Catholic household with a grandmother who was not only super faithful, but lived by the faith and gave it to others.”

Zachary Levi (Tangled) says that the roles of Bo and Joseph are on similar tracks.  “They’re on separate journeys, but they’ve both strong-willed and independent spirits,” he says.  “At first, they don’t exactly endear themselves to each other, but as they are forced together, they break each other down – their hearts soften.  Joseph begins to realize that Bo is a real hero who would do everything he can, including potentially saving Joseph and Mary’s lives, and appreciates it.

“Keegan-Michael Key brought so much energy and heart to Dave,” says Reckart. A dove with a big personality and Bo’s only friend.  He knows that the Royal Caravan is the place for a bird like him – if only he can keep Bo on track!

“The ‘dance of the royal dove,’ which is one of my favorite scenes, was built around some scat singing that Keegan completely improvised. He scatted for two minutes straight. It was amazing! All of us were holding our breath because we didn’t want to ruin the take!”

Sony Pictures Animation produces a variety of animated and family entertainment for audiences around the world.  The studio is following its worldwide comedy hits—the record-breaking monster comedies Hotel Transylvania and Hotel Transylvania 2, the hybrid live action/animated blockbusters The Smurfs and The Smurfs 2, and the mouth-watering Cloudy with a Chance of Meatballs movies—with the fully animated reboot Smurfs: The Lost Village available on digital and Blu-ray now; a surprising and comic take at the secret world inside our phones with The Emoji Movie now on Digital HD, Blu-ray, DVD, and 4K Ultra HD.

Hotel Transylvania 3 in July 2018; and an animated Spider–Man feature from the minds of directors Chris Miller and Phil Lord in December 2018.

In 2007, Surf‘s Up also received an Academy Award® nomination for Best Animated Feature Film; a sequel entitled Surf’s Up 2: WaveMania is now available on digital and DVD.  The division, whose first feature film Open Season led to a very successful movie franchise including the brand new Open Season: Scared Silly now available on digital, DVD and Blu-ray, was founded in 2002.