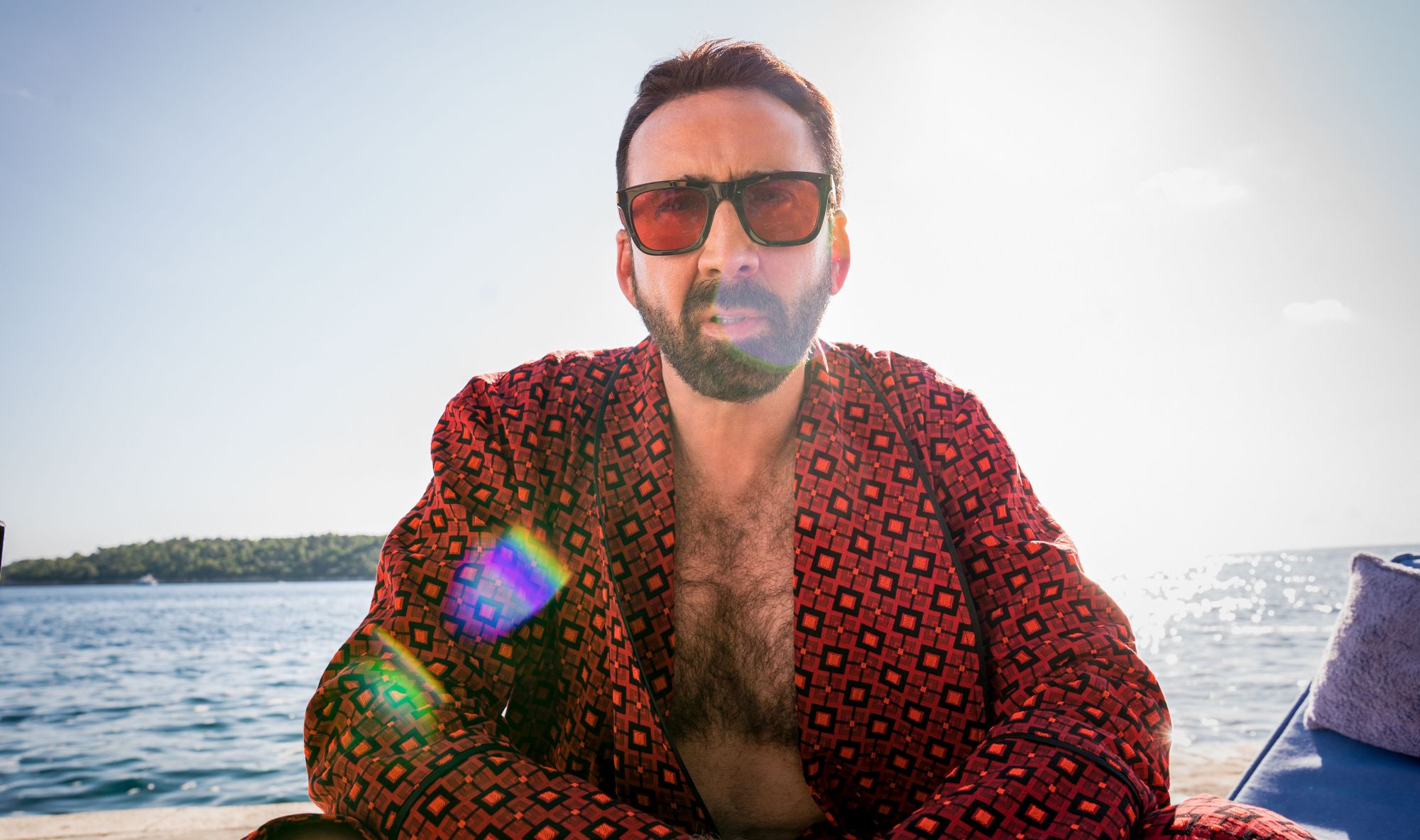 From filmmakers Tom Gormican and Kevin Etten, The Unbearable Weight of Massive Talent is a sincere, authentic, and hilarious love letter to Nicolas Cage – as you know and love him … and as you’ve never seen him before. It’s the role he was born to play.

The real Nicolas Cage is nothing less than a screen legend whose landmark pictures include The Rock, Face/Off, Con Air, Moonstruck, Honeymoon in Vegas, and an Academy Award-winning turn in Leaving Las Vegas (Best Actor, 1995). Now, The Unbearable Weight of Massive Talent builds upon that renowned work while turning it upside-down and inside-out with an imagined “Nick Cage.”

But why imagine an alternative existence for this Hollywood legend?

“Nick has become something that transcends being an actor,” says Gormican. “He’s become a cultural figure. As culture gets stranger and stranger and fashion choices get more outlandish, you can trace like a direct line back to the patron saint of strangeness, Nicolas Cage. Just seeing his face makes people happy. That’s really interesting and made me want to dig in further and find out who he actually is.”

Gormican’s intriguing and off-kilter ideas drew Cage in. “I call Tom ‘The Mind,’” he says, “because the film really is his fantasy, culled from perceptions in the media and on the internet, as well as blips in my personal life that have gone public. It’s mixed with knowledge of interviews I’ve done and things that have always interested me and drew me down this path. Essentially, the film is an imagination based on Tom’s interpretation of what my life might be like.”

The screenplay began as a “leap of faith,” according to co-writer and executive producer Kevin Etten, as the project was written on spec, with their subject having no knowledge of the filmmakers’ plans. “Nick didn’t know us, and we didn’t have a body of work he could check,” he says.

Cage was initially reluctant to participate. “I had no interest in playing myself in a movie,” he remembers. “But then I received a very nice letter from Tom, and I read his script. The first act really terrified me, and by the time I got to acts two and three, I thought, Tom, is taking us on an adventure that is really quite exciting.”

The letter, Etten recalls, “outlined in a thoughtful way why we wanted to do the project, which would be a true labour of love for us because we loved Nick and wanted to celebrate him – and work with him.”

“We wanted to make clear that we were in no way making fun of Nicolas Cage,” adds Gormican. “The film would be a homage to his body of work, and that just as his work spanned so many genres, so would our film.”

It was Gormican and Etten’s passion for Cage’s work, shared by millions around the globe, that inspired them to develop the idea

“There’s so much goodwill out there for Nick, and people want him to succeed,” Gormican points out. “We thought, what is he really like as a person?”

In the movie, “Nick Cage” is a fictionalized version of the star, imagined as a once-highly respected actor who has fallen on hard times and is craving a return to box-office glory and prestige. But his waning career is only one of his problems. The faux Cage’s megalomania has poisoned his relationships with his ex-wife Olivia (Sharon Horgan) and daughter Addy (Lily Sheen), though he can’t see it.

The fictional Cage is feeling unfulfilled and rejected, but nothing could be further from the real Cage, not least because the actor recently received some of his best reviews (in a career of good reviews) for his performance in Pig. “This is Tom’s invented version of Nick Cage – a neurotic, high-anxiety version of Nick Cage,” he says. “This film is a real head trip for me.”

In Gormican’s screenplay, Nick becomes frustrated – and a little unhinged – when he loses out on a role that he was desperate to inhabit. Moreover, he’s financially strapped. When his smarmy agent (Neil Patrick Harris) extends him a lifeline with an offer to attend a birthday party for a cool payday of one million dollars, Nick – despite his better instincts – reluctantly agrees, and hops on a plane to meet the birthday boy / Cage superfan, Javi, in picturesque Mallorca, Spain.

Again, the inspiration came from real life. “I had an actor friend who was going to do an appearance at someone’s birthday party, and he was depressed about it, thinking it was the end of his career and the lowest thing he could possibly do,” says Gormican. “And I thought it would be fun to put Nicolas Cage in that situation.”

Upon arriving in Mallorca and being greeted personally by Javi, Nick is completely checked out until he discovers that he and his host have much in common and begin to bond. “They’re both cinephiles, sharing a love of everything from The Cabinet of Dr. Caligari to Paddington 2,” says Cage. “Javi even has an elaborate wax statue of Nick, which blows Nick’s mind.” Javi serves a kind of stand-in for the filmmakers’ own diehard Cage obsessions. “Javi embodies all of our own fanboy love for Nick,” says Etten.

“Much of why I became an actor has to do with Nicolas Cage,” says Pedro Pascal, who plays Javi. “What I loved about the script is that it’s a story of friendship and adventure around an artist we’ve all grown to love over the years. Ultimately, what brings Nick and Javi together is their love of storytelling. It’s the connecting fabric for them.”

Nick is haunted by a shadow: “Nicky,” also played by Cage, is a young (think Wild at Heart-era Cage) figment of the actor’s considerable imagination who bellows for a single-minded focus on movie stardom.

“Nicky has this lanky long hair, and he’s riding Nick about his career choices,” says Cage. “For me, Nicky steals the show.”

In fact, the opportunity to play Nicky was something of a convincer for Cage to join the project. “What really put the hook in me about this movie was the idea of playing Nicky, and the interplay between the two characters really excited me,” says Cage. “Nicky will not rest until his alter ego tries to become a movie star again. It was like a trip down memory lane, rediscovering my energy from years ago.”

For research, Cage even looked up some of his more unconventional press interviews. Much of Nicky’s look was inspired by Cage’s appearance during those interviews, as well as the wardrobe he donned during the promotion of Wild at Heart, including a black leather jacket, black jeans, and boots.

Cage describes the character as “a younger version that I would like to kill. Nicky’s energy is very different from Nick’s or from Nicolas Cage’s. Nicky is loud, bold, and unapologetic. He still believes in himself and has his entire world ahead of him. Nicky questions and pushes his older self, sometimes brutally.”

The confrontations between Nick and Nicky, were, for Gormican, “the most interesting parts of the movie to capture. I think we found some magical moments during the filming.”

“Nicky is probably the most important character because he represents Nick grappling with the film’s central theme and is core to our own identity – that in order to grow and move forward, we are always struggling with a version of ourselves, which we must eventually leave behind,” Gormican continues. “In our film, it means that Nick, as a father, ex-husband, and actor, was wrapped up in this former version of himself – a big, youthful movie star, who’s a little selfish and narcissistic. He’s grappling with his identity in a way that feels fun and interesting. It also serves as a callback to the time he doubled himself in one of my favourite Nicolas Cage films, Adaptation.”

Cage and the filmmakers create yet another flavour of the actor, via another persona, “Sergio.” As the Nick character, after rescuing Olivia and Addy, races to ensure their safety in a dangerous compound, Olivia, a makeup artist, uses her considerable skills to transform her ex into the head of an Italian crime family. The production’s actual makeup designer and supervisor/prosthetics artist, Bill Corso, created the startling look.

Even if the moment is broad, Gormican says that “it’s played real in terms of the prosthetics. Sergio is really kind of magnetic.”

On another level, the creation of Sergio points to Gormican’s goal of slowly transforming Cage into a movie character he might have once portrayed. “Our character, Nick, has to become one of the action heroes he played in the late-90s and early-2000s in order to complete the mission,” the director says.

In one scene, Gormican recreates Leaving Las Vegas, the film that earned Cage his Academy Award. In the movie, Cage’s character is at his lowest point, drinking a beer in a swimming pool. “We built a pool and tank on stage, and I explained to Nick that he was to be at the bottom of the pool and have a beer,” Gormican recounts. “When I explained the mechanics of the scene, Nick quickly interjected, ‘Tom, Tom, Tom, I know. I’ve already done it.’ It was where reality and Nicolas Cage’s career collided, and we both just started laughing.”

Tom Gormican is a writer, director and producer working in film and television across all genres. He got his start working in the NYC independent film world for Greenestreet Films and Original Media. He created and wrote and produced the television show Ghosted for Fox. The Unbearable Weight of Massive Talent is his second feature film.

Kevin Etten is the co-writer and executive producer of The Unbearable Weight of Massive Talent. It’s his first film. Before that he worked as a writer and producer on television shows including The Late Show with David Letterman, Desperate Housewives, Scrubs and most recently Chad. He served as the showrunner and Executive Producer on Comedy Central’s Workaholics for seven seasons. He lives in Los Angeles with his wife Elizabeth, their son Charlie, their two cats, Marlowe and Henry, and a squirrel Elizabeth has taken to calling “Taka” whom she feeds every morning and claims is now part of the family.