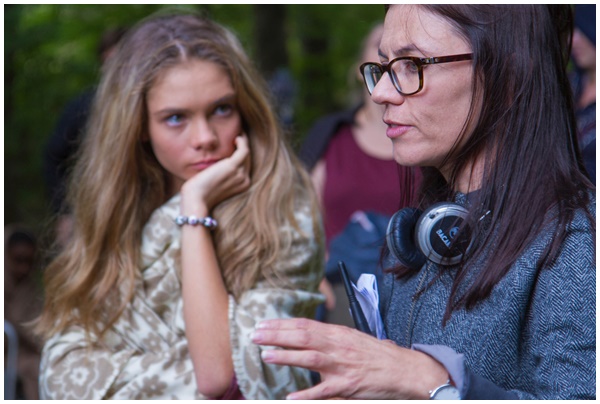 Meerkat Maantuig is an enchanting film about the stories we tell ourselves: The stories that define our lives and, more often than not, limit our lives.

Meerkat Maantuig is inspired by the youth novella Blinde Sambok by renowned South African author Riana Scheepers. Writer-director Hanneke Schutte, decided to use the book as a point of departure and turn it into a cinematic story set in the majestic forests of Magoebaskloof, South Africa.

Gideonette de la Rey is a fearful 13-year-old girl who believes in a family curse that has been passed down from generation to generation. Scared and desperate she’s unable to escape this story that has shaped her identity. Ultimately, it’s only by facing her fears that she’s able to transcend it.

Meerkat Maantuig is an enchanting film about the stories we tell ourselves: The stories that define our lives and, more often than not, limit our lives. With elements of magic realism, Meerkat Maantuig is a truly unique film unlike anything we’ve seen in South African cinemas – it’s a beautifully told story that shows us how to become braver than we ever thought we could.

Hanneke is a multi-award winning South African writer and director. She completed a BA in Zulu and Psychology and spent six years in advertising before embarking on a career as a filmmaker.

Her first short film Superhero debuted at the Durban International Film Festival and won two SAFTAs (South African Film and Television awards) for Best Short Film and Best Cinematography. The film was invited to screen at various international film festivals. In 2010, she was one of three South African filmmakers invited to the Berlin Film Festival’s Talent Campus in Germany where her short film screenplay City Swallows was a semi-finalist in the Berlin Today Short Film Competition.

She was the South African winner in 2013 of the prestigious Jameson First Shot Competition where she got the opportunity to go to Los Angeles to direct Willem Dafoe in her short film Saving Norman. The film was produced by Dana Brunetti (Social Network, House of Cards, Fifty Shades of Grey) and Kevin Spacey.

In 2014, her debut feature film, Jimmy in Pink, which was the winner of the UK Film Council and NFVF Script competition, also won the Best Feature Film Award at the Beloit International Film Festival in the USA. Meerkat Maantuig (Meerkat Moonship), her second feature film, had its North American Premiere at the Austin Film Festival in Texas.

Tell me about Meerkat Maantuig, what inspired you to adapt Riana Scheepers’ novella Blinde Sambok for the big screen?

I read Riana Scheepers’ novella about six years ago and I immediately knew I wanted to turn it into a film. It’s a strange, dark and whimsical tale and the themes in the book really resonated with me.

The title is intriguing… tell me about it?

Somewhere during the adaptation of the book, I decided to add a rocket or moonship to the story. The moonship had to spring from the small boy, Bhubesi’s, imagination and I wanted it to be childlike and magical. The moonship plays an integral part in the film and it helps Gideonette, the main character, to overcome her fears.

You used the book as a point of departure and turn it into a cinematic story?

Yes, the novella was the starting point of the film and I changed it quite a bit. Like I’ve mentioned, I added the moonship and I also set the film in Magoebaskloof. I wanted to create a dark fairytale and explore the genre of magical realism.

What inspired your shadowy fairytale vision?

I wanted to create something we haven’t seen a great deal of locally – a dark, but uplifting fairytale. It was incredibly important to me to ensure the visuals live up to this vision and that’s why I worked with the talented cinematographer Willie Nel to help me bring this to life.

Tell me about writing the screenplay, was it a difficult process?

Yes it was! The entire process probably took about 3 or 4 years, with breaks in between. I did a few drafts and then submitted it to the NFVF. They gave me development funding and I worked with a script editor for about a year. Once that was done I made further changes after we went into production. Me and Willie also changed the script quite radically during the shot listing process to try and make it even more visual and impactful.

Did you write the screenplay with any specific actors in mind?

Did you involve Riana Scheepers during the writing process?

I sent Riana two drafts – the very first one and the second last one. She was incredibly supportive throughout the entire process.

Tell me more about exploring the idea of how we can transcend fear and rewrite our own personal narratives by finding the courage to face our monsters instead of running away from them?

I was a very fearful child growing up and it took me years to rack up the courage to sleep in my own bedroom. I had a vivid imagination  and my childhood was filled with monsters and creatures and colourful ghosts. Truth be told I’m still a bit shy and fearful and that’s why it was important to me to create a story that deals with those fears. I wrote it more as a lesson to myself – to help me face my own fears: fear of the blank page, fear of speaking in front of people, fear that my work isn’t good enough, fear of putting my work out in the world. Like the saying goes: “You teach best what you most need to learn.”

Tell me more about your decision to introduce the Moonship to the story.

The moonship is a character in the film. It helps Gideonette overcome her fears. It has a magical quality to it and it represents freedom. The kind of freedom you get when you finally find the courage to face your fears.

Was it a difficult process bringing the story to the big screen? Tell me about the obstacles and how you overcame them?

There were many challenges and obstacles. First there was the challenge of getting the film made. It took me many years to find the funding and the right collaborators. We also faced many obstacles during the filming process. We shot for 4 weeks in the Magoebaskloof forest and it was constantly raining. We had to contend with snakes, spiders, tick, mosquitoes, you name it. We were perpetually wet and covered in mud, but it was also one of the most memorable and exciting things I’ve ever done.

Did you see yourself as the director of the film from the beginning?

Yes. This has been a passion project from the start and, I even during the writing process, I had a very clear picture of what I wanted it to look like. I was incredibly privileged to work with an wonderful team who helped me bring that vision to life.

Tell me about translating your words into images?

Ha! I had a hidden Pinterest page of about 1000 images that I shared with our Cinematographer, Production Designer and Wardrobe lady. I’d been collecting those images throughout the writing process and they even informed my writing. It helped me to establish a tone and mood that I was able to weave into the script.

As corny as it sounds, the future is what you make of it. If you keep writing script after script and if you take criticism onboard, you’ll improve with each draft. I’ve just finished the first draft of my next screenplay and it’s in pretty bad shape. But I’ve learned that I just have to keep at it – craft, sculpt, tweak, rewrite, problem solve, cry, rewrite. That’s the only way you’ll ever get anywhere. There’s no magic potion.

I think we’re in new age of SA cinema. Films like Five Fingers for Marseilles, Inxeba and Wonderlus get me excited about our film industry.

Any advice you want to give to aspiring writers and filmmakers who want to get their stories made?

Keep at it. Don’t give up. It took me 6 years to get Meerkat Maantuig made. It took me 7 years to get my first feature film made. I wanted to give up so many times but my husband kept telling me to hang in there and to believe in my stories.

Enter competitions – they give you the much needed deadline you need to work towards.

Wait until you find the perfect producer for you project, don’t just work with the first person that comes along. And make sure they understand your vision for the project.

What do you hope audiences will get from watching Meerkat Maantuig?

I hope that they’ll leave the cinema feeling proud that the film was made locally.

Like I’ve mentioned, I’ve just finished a crappy first draft on my next project called ‘The Poem’. I wish I could say it gets easier!