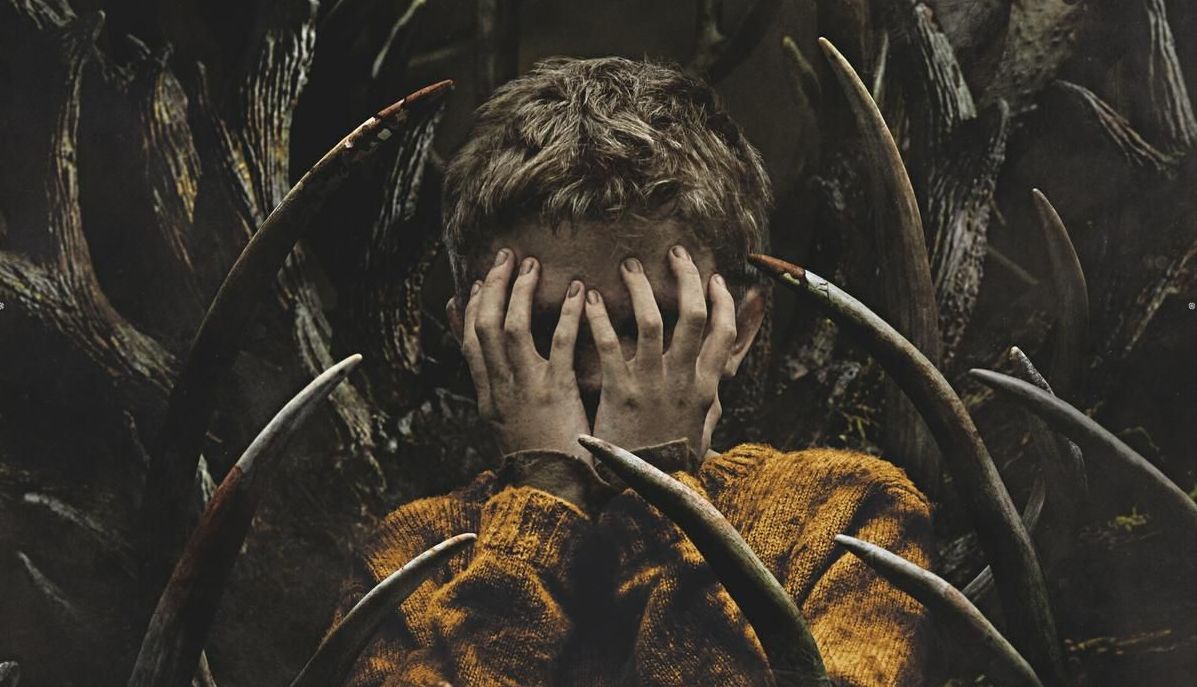 Adapting author-producer Nick Antosca’s short story The Quiet Boy into the emotionally charged horror feature Antlers, the screenplay by Antosca and C. Henry Chaisson blended Native American lore with family drama, with visionary director Scott Cooper exploring a mythical creature who embodied the fears and weaknesses of a small town decimated by the societal issues that so many towns encounter.

As luck would have it, in the summer of 2017, producer David S. Goyer (The Dark Knight) met with producer J. Miles Dale (The Shape Of Water) about a script written by Nick Antosca and C. Henry Chaisson.

“It began with the The Quiet Boy, says Antosca, the creator and showrunner of SYFY’s horror anthology series Channel Zero and co-creator/showrunner of Hulu’s Emmy and Golden Globe-winning true crime limited series The Act. “The story was loosely inspired by my mother’s experience as an elementary school teacher in a small town while I was growing up.”

Chaisson, who makes his debut with Antlers, says, “I spent a big chunk of my childhood in a post-industrial town on the east coast, a place where the pillar of the local economy had vanished. One of the things that drew me to Nick’s story was that it evokes that crumbling, forlorn atmosphere and crafts a horror scenario that feels so specific to that kind of setting.”

In an isolated Oregon town, a middle-school teacher (Keri Russell) and her sheriff brother (Jesse Plemons) become embroiled with her enigmatic student (Jeremy T. Thomas) whose dark secrets lead to terrifying encounters with a legendary ancestral creature who came before them.

“We took the project to Searchlight and were surprised to learn that Scott was interested because he typically writes his own material,” says Dale, who’d previously worked with the studio on The Shape Of Water. “But he really loved it and wanted to help evolve it from a genre movie into a beautifully complicated and suspenseful allegory about the relationship between human and nature.”

Cooper, an acclaimed filmmaker known for his artful exploration of the human condition, has made a diverse array of films, each one examining cultures and stories within a host of genres. From the underside of addiction in the country music world in Crazy Heart, to the intense familial drama that haunts the thriller Out Of The Furnace, to his astute take on the journey of Native Americans in the aftermath of battle in his western Hostiles, Cooper has sought to redefine our expectations of classic genre norms.

While Cooper explores the underlying social issues in his writing and filmmaking, he always seeks to assemble a crew of craftspeople to showcase eye-catching cinematography, intricate sound design, impeccable production design and dynamic acting to create an immersive cinematic experience.

With Antlers, Cooper jumped at the chance to tackle the genre of classic horror, forging a powerhouse partnership with the maestro himself Guillermo del Toro, a man who knows the way to boldly tell a tale of monsters.

Cooper’s enthusiasm for Antlers was cemented when horror and genre master filmmaker Guillermo Del Toro (Hellboy, Pan’s Labyrinth, and Oscar®-winner for The Shape Of Water) boarded Antlers as a producer.

Cooper says Del Toro’s involvement immediately lent a reassuring sense of artistic purpose. “One of the reasons I decided to do the film is because of Guillermo and his amazing skill at creating creatures,” says Cooper. “I wouldn’t have done it without his help in creating something that felt real and like it was part of the earth.”

It turns out the professional admiration was quite mutual: Del Toro had long admired Cooper’s work.

Cooper’s wide-ranging acuity as a storyteller across such disparate genres gave Del Toro the assurance, he needed that the two could enjoy a shared vision on Antlers. “For me, it’s a movie about rage, hatred and what happens when we destroy the earth,” says Del Toro. “Whether the rage happens in a family, in a country or to the environment, it’s all an invocation for this creature: The rage is what summons him. Yes, Antlers is a horror movie, but it’s also a really dark, poignant, and emotional social drama, anchored by surprising and immensely dedicated performances.”

Cooper’s attraction to the horror genre may have been the next logical step in an already nontraditional career. “Horror movies have always been among my favorites— Don’t Look Now, The Exorcist, The Silence Of The Lambs, and of course The Shining”, says Cooper. “And after doing a -musical in Crazy Heart, a suspense thriller in Out Of The Furnace, a gangster movie with Black Mass and a western with Hostiles, it felt natural to segue into horror,” says Cooper.

But Cooper wasn’t interested in horror-for-horror’s sake. He was intent to tackle a narrative that would allow him to employ the classic horror genre as a vehicle for telling a terrifying story of one family’s journey into darkness, steeped in the intimacy of a small north-western seaside town.

“How could I talk about what’s happening in America today and somehow draw those themes into horror? To me, the best of those films shares elements of social commentary, while also delving into the fears and weaknesses that haunt so many of us,” he says, adding that centering his story around a tortured yet formidable heroine as embodied by the versatile actress Keri Russell was a “complete coup for my film.”

For Del Toro, Antlers represents the next phase in an artistic life defined by pushing the boundaries of storytelling tropes.

“What I’ve tried to do throughout my career, from Chronos to The Devil’s Backbone to Pan’s Labyrinth, is take things that are common to the horror genre and execute them in different ways,” he says. “I’ve said it many times, but horror and fairy tales are one single tree trunk with two different branches. For example, the story of “Hansel and Gretel” is essentially a horror tale: Two kids are left in the woods and found by a witch who wants to eat their flesh? It’s not exactly a soothing story. I think Scott fought very hard to give Antlers this same kind of feeling. We shot in the Northwestern region of Canada in the fog and the trees. He refused to conform. He said, ‘I want the atmosphere. I want the real places. There is no substitute for reality.’ And that’s the beauty of Antlers: It’s a mythical horror tale.”

Working with Del Toro was a collaboration that for Cooper likely won’t be matched for some time.

“Guillermo’s passion and enthusiasm for creating creatures is what made the movie as good as it is,” he says. “He has a childlike exuberance and encyclopaedic knowledge about almost every creature that’s ever been made for the screen. He wanted everything we did to feel wholly unique to this project and what it represents on a metaphorical level as well.”

Cooper hopes Antlers offers as much of a thrill as it does a meaningful takeaway for the audience.

“The Wendigo represents the enduring historical trauma faced by Native people; cultural cannibalism, if you will, in the form of ‘capitalism’ that has unfortunately taken place ever since the English, French and others arrived on the shores of North America,” he says. “This is why it’s such crucial part of their mythology. I really tried to honour that as best as I could; the environmental degradation that we Americans—and people all around the world— have committed. In a way, Antlers is essentially about the ultimate vindication of nature.”

Cooper worked with acclaimed director Chris Eyre (Smoke Signals) as a consultant to specifically examine how the mythology of a native monster impacts a culture living on cherished native soil. “Chris and I first worked together on Hostiles, which told a story of Cheyenne, Apache, and Comanche natives, and I knew his insight and expertise into the native mythology in Antlers would be invaluable,” said Cooper.

Filmmaker Chris Eyre (Smoke Signals, Skinwalkers) served as Anishinaabe and Native American Advisor on Antlers and says the Wendigo is a particularly poignant metaphor for the fractious relationship humans now have with the land. “The Wendigo brings a message that you’ve encroached upon territory you’re not allowed to encroach upon, and the Wendigo will set it right,” says Eyre. “The larger message is that the earth has been here for millions of years. But we can never destroy the earth; she will destroy us. She doesn’t need us to go on.”

The Wendigo as Horror Monster: Preserving and Protecting the Native Lore that Inspired Antlers

The only thing more critical to Del Toro and Cooper than creating a convincing, unique on-screen “monster” was making sure the creature at the heart of Antlers drew accurately and respectfully from the Native lore from which it came. And much like the legendary Sasquatch creature of the Pacific Northwest (a.k.a Bigfoot), the Wendigo is as much rooted in regional storytelling as its ensuing place in the imaginations of folklore fans. The production worked with Indigenous Nations consultant Grace L. Dillon while researching and filming aspects of Native American folklore and culture.

The Wendigo (also spelled ‘Windigo’ and ‘Wetiko’) is generally known as a mythological deer-like creature and/or evil spirit in the mythology of the Native American Algonquian tribes, based in the northern forests of Nova Scotia, the East Coast of Canada, and Great Lakes Region of Canada. The Wendigo is widely accepted as a destructive, cannibalistic creature associated with winter, coldness and starvation, and is present in the traditional belief system of many Algonquin-speaking peoples, including the Ojibwe, the Saulteaux, the Cree, the Naspapi and the Innu.

The filmmakers relied heavily on various members of and experts in the Native American community in bringing the Wendigo-inspired monster in Antlers to life, including Grace T. Dillon, Anishinaabe and Native American Advisor, who offered a unique expertise.

“In the 1990’s, there was a sense that the Wendigo might have been inspired by Native contact with European nations,” says Dillon, who serves as a professor in the Indigenous Nations Studies Program at Portland State University in Portland, Oregon. “Within my community — I have family both at Garden River Nation in Ontario, Canada and Bay Mills Nation in the upper peninsula of Michigan—we’ve spoken about many aspects of the Wendigo. It can manifest in many ways, but it is first and foremost always a spirit.”

Dillon adds that an older term used by the Anishinaabe people (the group of culturally related indigenous peoples in Canada and the United States) for Wendigo literally means “greed.”

“We live together as villages and are constantly sharing, so any form of excessiveness is seen as a heinous thing,” says Dillon. “But there are variations on this, too. Wendigo can also be the fierce winds that come off of Lake Superior and damage ‘the common pot’ of our community, as we call it. The Wendigo can enter into any kind of consciousness, manifesting as animals or humans.

“The Wendigo legend felt like a natural fit for this place because it’s a monster that reflects our own demons and feeds off of our worst potential. It’s the spirit of lonely places. In a town like Cispus Falls the Wendigo comes to be a stand-in for the issues people would rather not confront,” says screenwriter Chaisson.  “It’s also just a terrifying concept because a wendigo, by definition, is a person who has become corrupted. It literally comes out of us,” he notes.