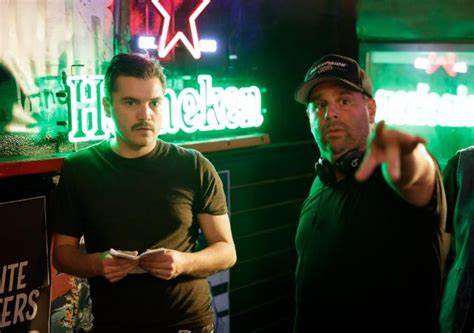 One of the entertainment industry’s most prolific film producers, Randall Emmett, who has produced over 50 feature films since his start as Mark Wahlberg’s assistant in the 1990’s, now makes his directorial debut with Midnight In The Switchgrass, bringing all of his experience, and affinity to this dramatic thriller.

“I hit a wall a few years ago creatively. I just felt like producing-wise, I was kind of creatively dying a little bit. My artistic self kind of was being pushed to the side,” says Emmett, who most recent films as producer includes The Irishman, Force Of Nature, Silence and Lone Survivor and directs Midnight In The Switchgrass from a screenplay by Alan Horsnail.

“It becomes somewhat of a business, and I just kind of wanted to challenge myself again and bring myself back to the child that I grew up as an artist. I said, let me try directing. Every time I thought about directing, I got petrified and nervous and a lot of my director friends said, well, that’s the good thing. That means that you’re doing the right thing and you should really pursue it because as a producer I’m pretty comfortable. I’ve been doing it a long time.”

“I was nervous all the way through all the way till probably the last day of shooting, which I think really that fear and that nervousness to put a different hat on after so many decades pushed me to be prepared and work hard and be the best version of myself. That’s where the love for directing now is because I get to bring my artistic self back to the forefront. So that’s kind of in a nutshell, why I transitioned..”

In the tense and based-on-true events dramatic thriller Midnight In The Switchgrass, the strength to keep looking for the weak and the abused can become an all-encompassing struggle.

For a dedicated cop and a driven FBI agent, stopping a serial killer before he abducts and kills yet another vulnerable young girl is fueled by anger, commitment, decency — and past trauma. The path to saving a life leads into a fiend’s shack of horrors, through the underside of American normalcy, and into a realization that not everything is as it seems.

“The underlying theme of this film really is justice, and the search for it,” says Emile Hirsch. who takes on the role of Florida Department of Law Enforcement detective Byron Crawford who is dealing with the repercussions of failing to stop a man who’s been stalking the Florida Panhandle.

“It’s about defeating evil — Byron Crawford is a detective trying to solve the homicides of missing girls who have been brutally murdered, and he essentially shuts down when he can’t do it. He thinks there’s no hope for him to solve them. When Byron meets up with Rebecca Lombardo, the FBI agent investigating the same kinds of crimes, they team up together and try with all they have to track down the killer. It’s a great story, in some ways similar to The Silence of the Lambs, Along Came a Spider, and other terrific serial killer movies that I love.”

“There’s an old proverb about hunting,” Crawford says in Midnight In The Switchgrass. “Lions are born knowing they’re predators. Antelopes understand that they are prey….Humans are the only creatures on Earth who are given a choice.”

“These cops and FBI agents are looking for the truck-stop killer, but they can’t seem to figure out who he is,” says Lukas Haas, who plays the fiend behind the story’s nightmares“How they team up to look for him makes for an interesting story. But the main thing that attracted me to this film was the character of Peter — it’s a very intense role. I’ve never played anyone like this before. I like to challenge myself.”

“This character is definitely outside of my wheelhouse — I’ve played dark characters before, but Peter is particularly bad,” says Haas. “But he has some interesting qualities, too. He’s multifaceted, even though he’s pretty much the worst person I’ve ever played! You start off feeling like Peter is kind of an okay guy — he has a nice family, he’s a good husband and family man. He seems like a nice, quirky, kind of charming guy in his way. I feel like you can’t really pin him down even when you know he’s up to some bad stuff. He’s complex and complicated, which makes him interesting.”

“I’m hoping this movie can serve to be a voice for the voiceless,” says Caitlin Carmichael, who plays a young girl who is abducted from a truck stop. “There’s an important line said in the film: ‘Are you really looking if nobody is looking for you?’ I think it’s important to use a story like this to bring light to the millions of stories and voices we don’t ever hear,” Carmichael says.

The Covid-19 shutdown impacted so many people and cost so many lives, it’s hard to recall the small ways life and work struggled to adapt in the beginning. The cast and crew of Midnight In The Switchgrass found themselves at the whim of a global pandemic in March and April 2020 — but they persevered, as Randall Emmett worked hard to find a way to finish the job, rally his troops, and do the right thing.