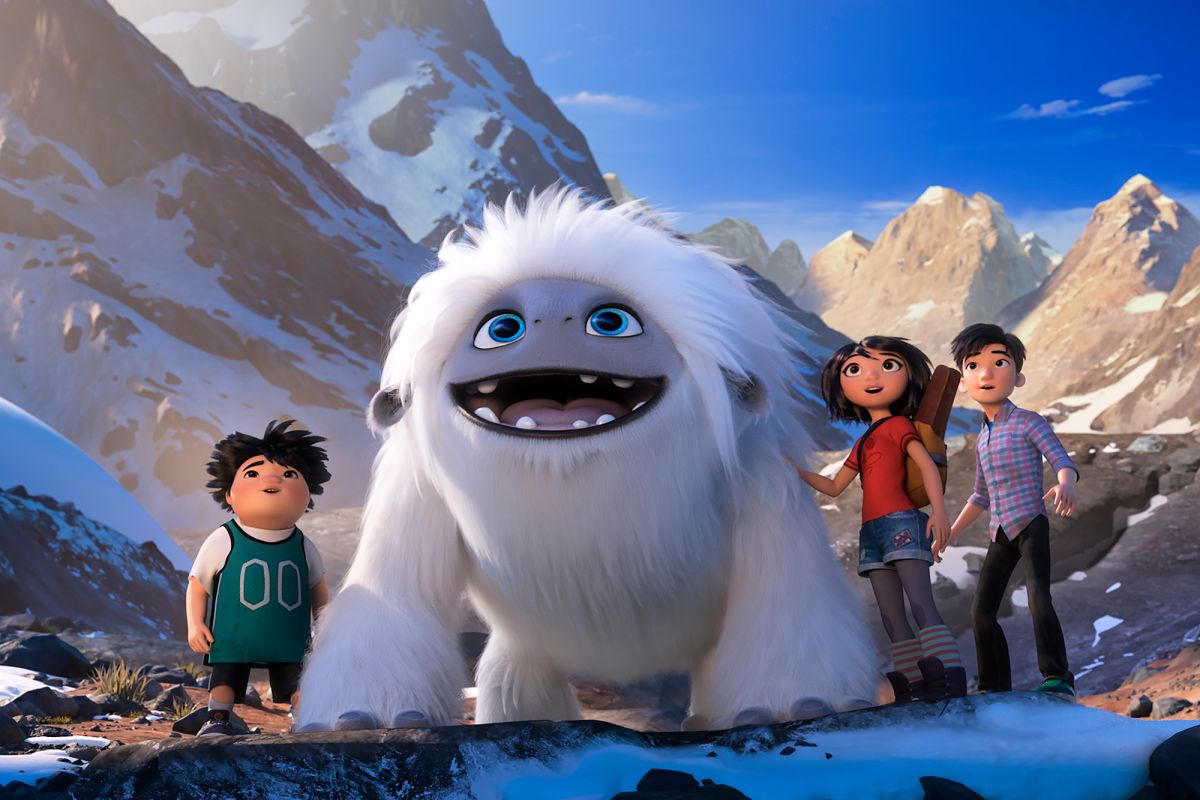 For Abominable writer/director Jill Culton, the road to DreamWorks Animation has been a long and winding one.

In bringing Abominable to life, Culton would find kindred spirits in producer Suzanne Buirgy, DreamWorks Animation’s longtime champion of the production, and Peilin Chou, chief creative officer of Pearl Studio and our story’s Yi writ large. Making history as the first trio of female filmmakers to bring a big-studio animated feature to the big screen, the collaborators did and do not take that historic designation lightly.

After she graduated from CalArts, Culton cut her teeth as an animator and storyboard artist at Pixar, where she collaborated on Toy Story, Toy Story 2 and A Bug’s Life before helping to craft the story for Monster’s, Inc. As well, she spent several years at Sony Animation, where she directed their first animated-feature film, Open Season.

Culton had met with DreamWorks over the years to discuss various projects, but it was not until she was swept away at an early screening of How to Train Your Dragon that everything clicked into place and she decided to join the studio.

Oriental DreamWorks, the company that later became Pearl Studio, and DreamWorks Animation pitched Culton the idea for a “Yeti movie,” and she took the seed of that idea back to her home in a small town nestled in the woods of Marin County in Northern California. There, surrounded by majestic redwoods, she began to imagine an epic tale of a young woman who finds herself at an unimaginable crossroads.

“When you have a blank slate like that to play with, you tend to fill it in with what you know and love,” Culton says.

Turns out her greatest inspirations were also her largest. “I’ve had huge, 90-pound-plus dogs for most of my life. They are my kids; I’ve had bloodhounds mostly, and they’re sloppy, slobbery and hilarious. I could just see myself connecting through the relationship that Yi has with the Yeti, and I drew the initial sketches of them together. I initially wanted him to be huge, like the kind of dogs I’ve had. Additionally, all my love for nature got poured into this—including my experiences camping and traveling. My dad loves the outdoors, and that was a big deal for our family growing up.”

The massive contrast in size between the Yeti, Everest, and Yi was inspired by a very specific memory from Culton’s childhood.

“When I was five or six, my neighbors had this giant London Great Dane that had to be almost 200 pounds,” she says. “I was always scared but intrigued; he outweighed me by more than double. One day, my friend Nancy and I were running around the house, and he started chasing us. I jumped off the stairs to avoid him, and I fell. This giant dog pinned me to the ground and was breathing in my face, staring into me; I was terrified but amazed at the same time. Since then, I’ve only had big dogs. They’re just this huge, fascinating presence in my world.”

Culton has always been passionate about the emotion that a musical score brings to a film, a love of which she’s brought into the medium of hand-drawn art. Culton knew that she needed music to play a central role in Abominable. Yi is a violinist and often uses music to express feelings she cannot put into words, and Everest possesses a nature-based magic with musical undertones. “I wanted Yi and Everest to travel the world to all these beautiful places outside a big city; that narrative connected to me,” Culton says. “I play guitar and piano and absolutely love music.”

Violin, however? That was a beast entirely new to her. She laughs: “All the early drawings I started sketching of Yi—where she’s holding the violin completely wrong—were some of the first ones I did. I’d have her doing everything from riding on top of Everest to standing on a rooftop. I just kept drawing her with a violin with the bright lights and glass buildings of the city as she played…such a hard image and romantic at the same time.

“I started asking myself, ‘What could her violin have to do with Everest himself?’ Culton continues. “I wanted a bit of magic, so I thought about how mystics have that chanting hum. I knew Everest and Yi could connect on that level. Growing up, my favorite Disney movies were the ones where there wasn’t a lot of talking. I was hell-bent on not having our Yeti speak, but rather communicate like a dog does—more intuitively with her.”

That idea resonated with producer Suzanne Buirgy. What Yi, and audiences, will later discover is that the hair of the Yeti and Yi’s violin connect on a magical, almost mystical level. “That’s integral to a kid watching the film and thinking, ‘I may not have magic Yeti strings, but somewhere in me, I have that magic in me…I can make things happen,’” Buirgy says. “That’s how Yi’s able to save him: the power of creativity.”

Culton also wanted the story to explore themes of deep love and loss in an honest and direct way. As the story begins, Yi’s father has died and Everest is lost, separated from his family and unable to find his way home. In her own life, Culton’s most poignant memories are also accompanied by her most painful, and she knew that for audiences to connect with Yi, she had to address that pain head-on, not shy away from it.

“There’s always been a thread in this movie where this violin belongs to Yi’s dad, who passed away,” Culton says. “While I don’t have a personal death like that in my family, when I was a teenager, my dad left the family. My parents got a divorce, and it was devastating. I can relate to Yi’s loss on that level…especially how she’s disconnected from her family. When you’re a kid going through a difficult divorce and your parents want to ‘sit down and talk about this…’ you’re like, ‘No! I don’t want to talk about it!’ Nobody does. That reality of a teenager going through something devastating that’s changing the family is very real and personal to me.”

As she wrote, Culton wove the tale of an independent 16-year-old who has lost her father and has grown disconnected from her mother and grandmother, who are trying to get Yi to open up and rejoin the family. The filmmaker wanted Yi to be feisty and independent, a tomboy who’s not quite ready to reveal her true pain. “I certainly was like her when I was younger,” Culton says. “She feels like she doesn’t need anyone.”

Yi discovers Everest on her roof at a critical juncture in her life, when she is beginning to see that she needs to reconnect with others. Because Everest is leagues away from his own home in the Himalayas and desperately needs her help, Yi learns to open her heart a crack and decides to take him back to where he belongs. “Yi meets Everest on the rooftop when he wakes up as she’s playing her violin,” Buirgy says. “Jill long had a picture in her head of Yi standing on the rooftop, with the lights of the city spread out before her.”

When Culton began her story, she conceived of it as a journey with Everest and Yi alone, but as the story evolved over the years more characters were added. In 2015, the filmmaker paused her involvement in Abominable for a time to focus upon other projects. While she was on hiatus, executive producer and Abominable godfather Tim Johnson and Culton’s longtime comrade-in-arms Todd Wilderman, who became the film’s co-director, contributed narrative arcs that honored her vision.

“When I came back on the show, I started thinking of it as not just Yi and Everest on an adventure like in E.T. but more of an ensemble story like Stand by Me, with a group of kids who must deal with each other, as well as with hard issues, as they go on this journey. Still, Everest is the core of changing their lives.”

The realization for Yi that she’s the principal person who can aid this Yeti is a gradual one, but her instinct to protect him is immediate. As Yi leads Everest back, he helps her understand how to go home herself. This emotional truth of the story is paramount to filmmakers.

“I used to think of a story as a big puzzle,” Culton says. “Now I think of it as a house of cards, where if you pull out key pillars, it could fall apart. When I sit down to plot out a script, I know to consider the physical cards, which is the journey itself; I put down physical obstacles for those. If the cards are too easy, the audience will get bored. You absolutely have to have twists and turns.”

She pauses. “But then you have your emotional cards to play, the ones that tell you why the character is the way she is…the ones set up at the beginning. Yi is a headstrong teen who is distant from her family; the emotional cards lay out the ‘why’ she is that way. You have to parse that out, or you lose your drive. The plot is the drive, but so is the emotional journey. If you give it all away too soon, you have nowhere to go. We’ve given bits and pieces of Yi’s background out all along the way. If you hear a stranger is going through something tough, you feel bad for them. But if it’s someone you know well, you empathize with and emote for them. That is why it is important to save some emotional reveals for later in the film, after we know the characters. Those big revelations allow us to care about them and feel empathy for them.”

It was also critical to Culton that audiences not see Everest’s home on Mt. Everest until he, Yi, and the boys arrive there. We experience Mt. Everest for the first time at the same time Yi does. “You have to earn the awe at the end of the movie,” Culton says. “You want to go on this journey with them to the Himalayas. When we finally get there and that shot opens up and we see the beauty of them, we wanted the audience to gasp and go, ‘I’ve been waiting for this!’ just as the kids in the story are in awe.”

Chou believes that this film is, in many ways, Culton’s destiny. “Jill was uniquely positioned to tell this story that is so personal to her, and she always believed she was meant to direct this film,” she says. “She has such an intensity toward it, that even during changes of leadership—and during a hiatus from the project when she was working on other movies—Abominable was still in the back of her mind. We never abandoned the project, and she never abandoned us. There’s this mysticism to her. She knew in her heart of hearts she was meant to bring this film to the screen. And she was right! Jill never gave up on it, and it came true. She’s like Everest; she showed us the way home.”