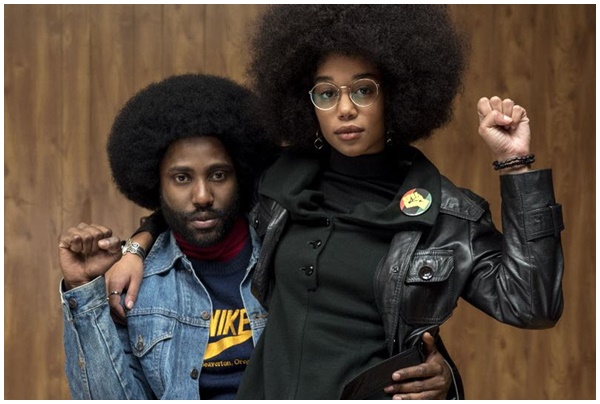 Nearly three decades after releasing that masterpiece Do the Right Thing, visionary filmmaker Spike Lee’s latest expression of the facts of American life – BlacKkKlansman, which was awarded the Grand Prix at the Cannes film festival – is the true story of Ron Stallworth, the first black detective in the Colorado Springs police force who, in 1978, went undercover with the Ku Klux Klan.

Spike Lee directs from a screenplay crafted by Charlie Wachtel & David Rabinowitz and Kevin Willmott & Spike Lee, based on the book Black Klansman by Ron Stallworth

It’s the early 1970s, and Ron Stallworth (John David Washington) is the first African-American detective to serve in the Colorado Springs Police Department. Determined to make a name for himself, Stallworth bravely sets out on a dangerous mission: infiltrate and expose the Ku Klux Klan. The young detective soon recruits a more seasoned colleague, Flip Zimmerman (Adam Driver), into the undercover investigation of a lifetime.

Together, they team up to take down the extremist hate group as the organization aims to sanitize its violent rhetoric to appeal to the mainstream.  Produced by the team behind the Academy-Award® winning Get Out.

The story began bizarrely enough, when Stallworth saw a recruitment ad for the KKK in the classifieds of the local newspaper. He called the number, raised the pitch of his voice a couple of notches, and made up a tale about his disgust at his white sister dating a black man. He was immediately invited to join up. Working as a double act with a white Jewish cop – Stallworth on the phone, his partner in the hood and robes – he infiltrated the group, and, in a series of unlikely twists, not only ended up being proposed as leader of the local chapter, but also became the telephone confidant of David Duke, the “grand wizard” of the white supremacists. Duke eventually came to Colorado Springs personally to initiate Stallworth into the Klan.

The film, like all of Lee’s films, enjoys some wicked shifts of tone, in this case designed to make his audience smile at some of the historical ironies even as they are asked to confront the vivid extremes of American bigotry. Lee is a master of comic caricature and the Klan members offer scope for a full range of racist imbecility. In Stallworth’s memoir, the undercover cops foil a planned nail-bomb attack on a gay bar. Here, the targets of the Klan’s plotting are black student activists who invite Stokely Carmichael, the former Black Panther, to speak at their campus, which allows Lee to appropriate some of the style of the post-blaxploitation era.

The project came to Lee after being developed by Blumhouse and Get Out director Jordan Peele.

Jordan Peele and his co-producers approached Lee with the script for BlacKkKlansman. Peele immediately identified Lee as the man to bring it to the screen.

“They acquired Ron Stallworth’s book and felt it needed more flava,” says Lee. “And that’s what I brought. I was grateful for the opportunity because I had never heard of Stallworth. I didn’t know his story. People say, “That is too unbelievable to be true.” And that’s what makes it such a great story. When he explained it to me, my next words were, ‘Is it true?’ People say, ‘Didn’t Dave Chappelle have a skit like that?’ I could see why Jordan and his team thought this was something that would work [for me].”

He thought of Washington, the son of Malcolm X star Denzel, almost immediately. “The Washington/Lee families have been tight for years,” Lee laughed. “Brother man to the right, if you go on IMDb, hopefully, you’re going to read that Malcolm X is number one. He’s one of the kids that says, ‘My name is Malcolm X.’ How old were you?”

“Six,” said Washington. “Oh my god. And six takes. He kept saying, ‘Listen to Uncle Spike…’ I was a little excited. I nailed it though; I felt like we got it.”

Harrier plays a fictional character in the film called Patrice Dubois, but she’s inspired by the heroic women of the Black Power Movement. “Angela Davis and Kathleen Cleaver, who Spike introduced me to,” Harrier said. “[I was] drawing from these really powerful women who were such a huge part of this movement. I don’t think we’ve heard their stories enough.”

Lee said it was important for the film to recognize those heroines. “We knew about Angela Davis and Kathleen Cleaver, but they weren’t the only sisters who were right by H. Rap Brown, Eldridge Cleaver and Bobby Seale; they were very much part of the movement.” He joked: “We would have been crucified [not to include Patrice]. Black Twitter would have torn our ass. You ain’t been torn up ’til Black Twitter tears your ass up. And right now, they’re killing Kanye.”

Lee first glimpsed Harrier in her breakthrough role in Spider-Man: Homecoming. “I said, ‘Damn, they got a Spider-Man with a sister,’” Lee laughed. “I was hip about it.”

Casting Topher Grace as Duke, Lee said, was an idea suggested by their shared agent. It’s an inspired bit of casting, and Grace is perfectly-pitched and frighteningly dark in the role. “I got to give Toni Howard credit, because it never crossed my mind,” Lee admitted. “And she never does that. If you looked at his body of work you might not think of him as David Duke. But what he did? Jesus Lord.”

Above all, Lee hopes his films serve as “time capsules” for future generations.

“I’m starting my fourth decade of films, and my work, after I’m long and gone, will be seen forever,” he said. “I’m very proud of my work. I work very hard, you know, working my craft, honing my craft, and I think that my film, some of my films, could be used as time capsules to see what was happening.

Director/Producer/Writer Spike Lee has created an iconic body of storytelling that has left an indelible mark on filmmaking and television and was awarded an Honorary Oscar in 2015 for his lifetime achievement and contributions to the state of motion picture arts and sciences.

Lee’s film credits over three decades include She’s Gotta Have It, School Daze, Do The Right Thing, Mo’ Better Blues, Jungle Fever, Malcolm X, Crooklyn, Clockers, Girl 6, Get on the Bus, He Got Game, Summer of Sam, Bamboozled, 25th Hour, She Hate Me, Inside Man, Miracle at St. Anna, Red Hook Summer, Old Boy, and Chi-Raq.

Lee’s outstanding feature documentary work includes the double Emmy Award -winning If God Is Willing and Da Creek Don’t Rise, a follow-up to his HBO documentary film When the Levees Broke: A Requiem in Four Acts and the Peabody Award-winning A Huey P Newton Story.

Spike Lee with Adam Driver during the filming of BlacKkklansman

In the television arena, Lee is currently in pre-production on Season 2 of his Netflix Original Series She’s Gotta Have It, a contemporary update of the classic film. Lee is also known for his legendary Air Jordan TV commercials and marketing campaigns with Michael Jordan for Nike. In 1997, he launched the advertising agency Spike DDB, a fully integrated agency with a focus on trendsetter, cross-cultural and millennial audiences.

He is a graduate of Morehouse College and New York University’s Tisch School of the Arts, where he is a tenured Professor of Film and Artistic Director. Lee’s Production Company 40 Acres and a Mule Filmworks is based in Da Republic of Brooklyn, NY.

Willmott, wrote, directed and acted in the award-winning film, Destination Planet Negro! available on Amazon Prime and ITunes, and he wrote and directed the critically acclaimed feature film C.S.A: Confederate States of America, about America, had the South won the Civil War. C.S.A. premiered at the Sundance Film Festival was released theatrically in the U.S. by IFC Films.

His other feature credits include 2009’s The Only Good Indian, 2008’s The Battle for Bunker Hill and Ninth Street, which Willmott wrote, produced and co-directed. He is the executive producer of the critically acclaimed feature film, The Sublime and the Beautiful, directed by Blake Robbins. For television, Willmott co-wrote with Mitch Brian the mini-series “House of Getty” and “The 70’s.”

As a screenwriter, Willmott co-wrote Shields Green and The Gospel of John Brown with Mitch Brian. The script was purchased by Chris Columbus’ 1492 Productions for 20th Century Fox. He also co-wrote Civilized Tribes for producer Robert Lawrence and 20th Century Fox. Producer and director Oliver Stone hired him to co-write Little Brown Brothers, about the Philippine Insurrection, and to adapt the book Marching to Valhalla by Michael Blake.

Willmott’s feature film, Jayhawkers, tells the story of a group of unlikely allies who modernized college sports and changed Kansas University during the early stages of the Civil Rights movement

Willmott adapted and directed a stage version of The Watsons Go to Birmingham in New York and at Kansas City’s Coterie Theater. The play T-Money and Wolf, written with Ric Averill, dealing with the holocaust and contemporary gang violence, was selected as part of the New Vision/New Voices series produced by the Kennedy Center in Washington, DC. Willmott directed the premiere performances of Now Let Me Fly, a new play by Marcia Cebulska commemorating the 50th anniversary of the Brown v. Board of Education decision to segregate public schools. He also directed two documentaries Fast Break: The story of Legendary Coach John McClendon and William Allen White: What’s the Matter with Kansas, about the famed Kansas journalist.

Willmott grew up in Junction City, Kansas and attended Marymount College receiving his BA in Drama. He graduated from New York University’s Tisch School of the Arts with an M.F.A. in Dramatic Writing and is currently a Professor in the Media and Film Studies Department of Kansas University.

Screenwriter Charlie Wachtel is an L.A.-based independent filmmaker. He got his start as a Hollywood assistant, with stints at UTA, Benaroya Pictures, Weed Road and Echo Lake. Soon after, he fell into copywriting, writing for ad agencies and on the client side. Wachtel is from East Brunswick, New Jersey, and a graduate of the acclaimed FAMU Film School in Prague and American University.

Screenwriter and Co-Producer David Rabinowitz is an L.A.-based screenwriter and performer. He got his start working as a multimedia producer for the Wall Street Journal. Since, he’s worked as a freelance video editor, copywriter, and motion graphics artist. Rabinowitz is from East Brunswick, New Jersey, and a graduate of Quinnipiac University.

Ron Stallworth and his wife Patsy