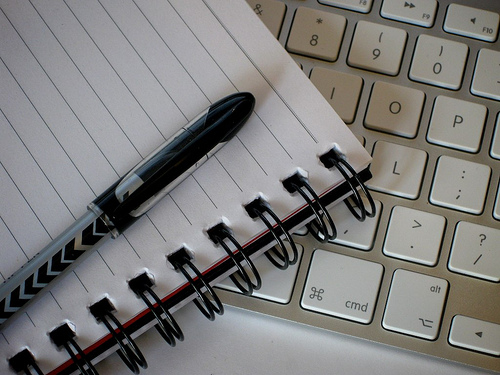 The boring babbling that drowns passion

That’s the reality of being a writer.

Ultimately it’s about getting words down on paper that will tell a story that will express the heart and soul of a writer, and capture the imagination of readers and audiences worldwide.

This might sound strange and rather obvious, but most aspiring writers fail to commit themselves to the writing process for the simple reason that they don’t write.

During 19 years of presenting workshops for writers and coaching writers throughout South Africa in Creative Writing and Scriptwriting, and working with writers on the development of their stories, I tried to solve this mysterious phenomenon and suddenly came to the realisation that there was a very good reason why most aspiring writers do not write.

Whenever encountering writers and always being bombarded by a verbal onslaught of the greatest story never written, it became obvious that a main reason why there is no commitment to the writing process is simply because those who fail to write would rather talk about their writing, than sitting down and write.

The moment writer’s step out of the comfort zone of a workshop, knowledge gained and insight garnered dissolves into a chase sequence where disorder reigns supreme.

Sudden inspiration becomes nothing more than a brief flirtation with genius; and motivation becomes just another reason to feel good about the desire to write, or having the opportunity to boast about literary talent.

When you ask a writer about the progress of ‘that great masterwork fuelled by passion’ the response is predictably the same:

Aspirant writers love to talk about their latest project, or the great new idea that surfaced unexpectedly, or about the one that they have been working on indefinitely, or even one that has not yet surfaced and is floating around in their inspired mindscape.

For writers it’s a natural human trait that provokes babbling and small talk.

Why does talking about it cancel out writing it?

Think about it this way.

You invite a friend you haven’t seen in years over for a visit.

You then tell everyone you know about it, you conjure up vivid images of what you and your friend will be doing during the visit, places you will see, perhaps even go as far as having the exact meals in mind. When the friend cancels it’s another story. The eagerly anticipated something is now nothing.

A worthwhile expectation is deemed worthless (and wordless).

With all these negative emotions working against the creative process, it is understandable why the pleasure of writing turns into suffering and misery.

It is easy to combat the negative energy.

Take control and turn thoughts into words that will then be turned into action.

In an ideal writing utopia, writers write relentlessly and dramatise events effortlessly, fervently transporting raw ideas into stories that capture the imagination of the world and transport readers to imaginative worlds where nothing is impossible and anything can happen.

It’s the instinctive creative nature of a writer that provokes writing.

“I have to have this release. I must write. I cannot never write. I will not be whole,” says South African author Rayda Jacobs, whose award winning novel ‘Confessions of a Gambler’ has not only received huge local acclaim – winning the 2004 Sunday Times Literary award and the prestigious Herman Charles Bosman Award – but her inspirational story was optioned by Executive producer Costa Theo, who identified the award-winning novel and was instrumental in securing the project and bringing the film to life.

It is understandable why writers enjoy talking about what they aspire to write about.

The writing process has dissolved into verbal diarrhoea, discipline has been replaced by artistic chaos, grand ideas mutated into unfinished and wasted thoughts, and success has become a war zone where the only enemy is the storyteller.

Most writers live in a world where imaginative, unrealistic and non-existent realities dominate their existence.

In their sub-conscious minds they are constantly confronted by real-life truths most storytellers tend to ignore, but will always be hanging over them like a shadow:

Trying desperately to not allow life to intervene, unfamiliarity alienates passionate intrigue, or simply blinded by ambition, an inherent fear of the writing process sets in.

We have a blinding passion to tell our stories but are too afraid to write them.

We think our fear is connected to the writing process whereas the truth is that we are only afraid of ourselves; of the little imperfections that make us unique and give us our voice.

Shattered by the discovery of the writing process, always telling the whole world about their project, mostly complaining about the unfair treatment unleashed on storytellers, demanding the attention of those who happen to be caught in this intriguing web, most writers just give up.

And so does those who have to listen to the same scenario.

Over and over again.

The boring babbling drowns the passion that is supposed to amount to something, anything, as long as it is painfully transformed into written words that can be read and magically translated into another medium.

Express it in writing, through words that will capture the hearts of readers.