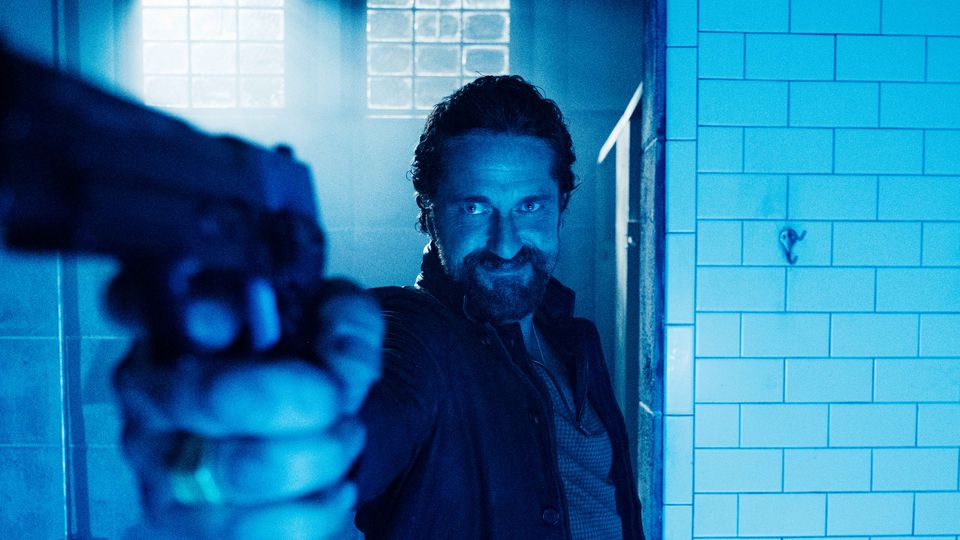 When Gerard Butler, who has established himself as one of Hollywood’s foremost action stars and one of its most bankable leading men, first read the earliest drafts of the screenplay for Copshop 6 years ago, the premise not only captured the actor’s imagination, but he also recognized that some of the ideas in the script had as-yet-unrealized potential.

Bringing power, nuance and wit to every character he plays, Butler channeled his passion and commitment into the can’t-miss role of contract killer Bob Viddick in Copshop, which sees a cat-and-mouse game unfold between a con artist and the hitman who’s sent to take him out..

It’s an explosive new action-thriller from writer- director Joe Carnahan, who gave us the supercharged and excellent Boss Level earlier this year.

Butler and his producing partner in G-Base Productions, Alan Seigel, turned to a writer-director with a sterling track record when it came to original films bristling with intensity, Joe Carnahan. Having rocketed to stardom on the strength of his no-holds- barred debut Blood, Guts, Bullets and Octane, Carnahan won further acclaim with such films as Narc, Smokin’ Aces, The A-Team and The Grey.

His sensibility was an ideal fit for the material, and he immediately understood how to hone in on a fresh and exciting interpretation of the story. Inspired by iconic 1970s films like Bullitt, Dirty Harry and Magnum Force, Carnahan ratcheted up the tension between the hitman and his quarry, and he also sharpened the interactions between both men and the calm, capable rookie cop who comes between them.

“I saw the story as very much a ’70s neo-feminist western with a bit of noir,” Carnahan says.

Frank Grillo, Carnahan’s producing partner in their WarParty Films banner, was equally excited by the project, as it fit squarely within the company’s mission to create elevated movies in the action-thriller genre. A veteran actor with dozens of high-profile credits to his name—including HYDRA agent Brock Rumlow in Marvel’s Captain America films and Leo Barnes in several entries in the Purge franchise—Grillo also was eager to share the screen with Butler, as the two had been friends for years.

The relationship Carnahan scripted between the characters gave both actors much to explore. Neither is anything remotely approaching a conventional hero, rather, they are hardened, untrustworthy men whose pasts are littered with all sorts of sinful transgressions. “Bob Viddick is not a good guy, and he points that out that neither himself or Teddy Murretto are good guys or redeemable guys,” Carnahan says. “He understands that. Whether Teddy understands that is another matter. But there are no easy answers. There’s a lot of grey area.”

Producer Eric Gold of Sculptor Media found Carnahan’s draft to be both compelling and quick-witted. “He took all the characters and put so much more depth into each of them,” Gold says. “He added a sense of humor that moves in and out of the script that gives the audience a little breath of fresh air because there’s a lot of darkness in this as well. There’s a joy that he brings to it as a writer.”

With its charismatic characters and its singular marriage of intrigue, suspense and all-out carnage, Copshop is the sort of highly original genre production that could only come from filmmaker Joe Carnahan. The writer-director says he’s excited to be able to offer audiences a reason to head back to movie theaters for a great night out.

“These types of films are great, popcorn, escapist kinds of movies, and I think that especially now, with what we’re dealing with as a global community, people need to be entertained,” Carnahan says. “Giving people a reason to laugh or smile or lose themselves for even a couple of hours is a noble pursuit right now.”

Adds producer and star Frank Grillo: “Copshop is really pure entertainment. It’s why we go to the movies. You can sit back and get your popcorn, and it’s a fun ride.”

Bob Viddick is a man who lives his life in the shadows, and the code he follows is clear—get the job done, no matter what. In that way, the role dovetails with men that actor Gerard Butler has portrayed in the past, complex characters with strong core values. Yet there’s no question that the morally ambiguous hitman offered Butler the opportunity to stretch his creative muscles in a new way, and that, he says, was a key part of the attraction. “Bob Viddick was a bit of a departure for me,” Butler says. “He’s off the cuff and a bit left of center.”

On the set, the Scottish actor says he found himself challenged—in a good way—not only by the character but also by Carnahan’s high-energy approach. “Joe encouraged adlibs and improvisation,” Butler says. “It’s not the type of work I’m used to, which made it massively fun. It helped that I’d been wanting to work with Frank Grillo for some time, too. We developed a rhythm and just rolled with it.”

Carnahan says the two actors made for an ideal pairing. “Gerry has this incredibly disarming way about him that makes a bad guy intensely likeable,” he says. “Frank has that intensity, too. There’s always this underlying charm and wit, and you just get behind them. It really works for the story because you need these opposing totems to put the young impressionable cop between.”

When scripting the character of Murretto, filmmaker Joe Carnahan thought back to the characters played by John Cazale, the late actor who appeared on screen in five cinematic classics—The Godfather, The Conversation, The Godfather Part II, Dog Day Afternoon and The Deer Hunter—before his untimely death at the age of 42 in 1978.

“Murretto is not the macho guy Frank normally plays,” Carnahan says. “I always get a kick out of actors going against your expectations.”

For one thing, the look of the character, who wears his shoulder length hair in a top knot, is quite distinct for Grillo. “Teddy’s got a ponytail and a fancy suit and snakeskin boots—Teddy’s a character,” the actor says. “He’s a player. He’s a used car salesman and a gambler. He gets himself into trouble because he goes against the people that are taking care of him. And he’s a very dangerous character because he can take down a lot of people—not just mob people but also politicians and law enforcement and so forth. So, he’s a very dangerous element in the story, and he’s got to be dealt with.”

Slipping into Murretto’s skin was enjoyable enough, but working opposite Gerard Butler as Viddick made Grillo’s time in the role even more creatively exciting, the actor says. “The dynamic with Gerry’s character is great,” says Grillo. “Gerry’s a friend of mine, so it’s fun to act with your friends. It’s these guys playing cat and mouse. It’s prodding and poking and pushing and pulling, and we have to do it within the confines of these two jail cells. The way it’s shot is very interesting and scary and eerie. It’s a real psychological thriller for a while—until it becomes an action movie.”