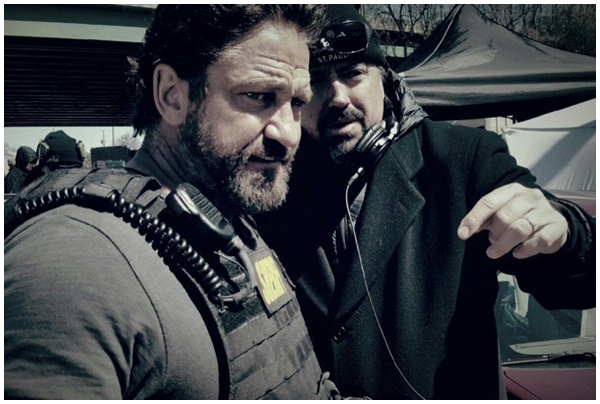 A character-driven narrative that turns the traditional heist film on its head.

Den of Thieves is a gritty present-day crime saga with origins dating back to 2002.

Screenwriter (and first-time director), Christian Gudegast was reading “Where the Money Is,” a nonfiction book about how Los Angeles became the bank robbery capital of the world, when he saw a photo in the Los Angeles Times; the photo, taken at the Federal Reserve Bank, was of a massive tub of money.

The photo and the book sparked an idea, and Gudegast wrote the story that would eventually become the basis for the original screenplay,  based on a story by Gudegast and Paul Scheuring (Prison Break: The Final Break).

A gripping thriller that manages to take a familiar concept and make it feel both fresh and timely, Den of Thieves focuses on an elite crew of bank robbers, who plot to pull off the ultimate heist, and the hard scrabble gang unit of the L.A. Sheriff’s department working to bring them to justice.

Led by the icy, preternaturally calm Ray Merriman (Pablo Schreiber), the Outlaws are not run-of-the-mill bank robbers; they operate with military precision, meticulous planning, and employ subject matter expertise — all skills acquired from military special ops service and prison stints. Merriman’s fellow Outlaws include disciplined family man Enson Levoux (Curtis “50 Cent” Jackson), and Bosco Ostroman (Evan Jones), a battle-hardened veteran and gifted thief. They’re joined by their “driver” Donnie Wilson (O’shea Jackson Jr.), an ex-con bartender with a mysterious past, who may be out of his league.

However, in order to pull off the ultimate heist, they’ll have to outmaneuver the Regulators – the Major Crimes unit of the Los Angeles Sherrif’s Department – who operate in unconventional ways that often blur the thin blue line in order to bring down the most elusive and dangerous criminals. The Regulators are led by alpha dog “Big

Nick” O’Brien (Gerard Butler), a hard drinking career detective seemingly unencumbered by a moral compass. His choices and priorities destroy what remains of his family life. He’ll stop at nothing to put an end to Merriman’s crime spree, which has been taunting the authorities for years with increasingly ambitious unsolved robberies

After a simple operation to commandeer an armored truck turns into a brutal firefight — resulting in the deaths of armored guards and several police officers — the Outlaws find themselves the primary target of the Regulators. It soon becomes apparent that neither side plays by traditional rules.

Rattled by the robbery gone sideways, Merriman sets his sights on the ultimate heist; infiltrating the Los Angeles branch of the Federal Reserve to and steal $30 million of unfit U.S. currency being taken out of circulation before it can be shredded and destroyed, thereby stealing money that nobody is looking for. Their extensively researched and detailed plan is set into motion and the Outlaws are forced to engage in an increasingly tense game of cat and mouse as the Regulators work to tie Merriman’s gang to a string of unsolved heists and anticipate their next move.

There are no heroes or villains in this intricate face off – just highly skilled, equally matched opposites. In a series of escalating confrontations, the city of Los Angeles becomes a giant chessboard, with each side strategically excising the other’s pawns, rooks, bishops, knights and queens, to reach a thrilling, and entirely unexpected checkmate.

Writer/Director/Executive Producer Christian Gudegast is a native of California, born and raised in Los Angeles, where he fell in love with photography and film at an early age. As a young kid, Gudegast was so enthralled with movies that he would sneak into theaters in Westwood and watch everything from Fellini to Jaws, from Cheech and Chong to Stanley Kubrick.

Growing up in the entertainment industry, Gudegast loved going to work with his father, Eric Braeden, a German-American film and television actor, known for his work on “Hawaii 5-0,” “Gunsmoke,” “Charlie’s Angels,” “The Rat Patrol,” Colossus, and Titanic, to name a few.

Today Gudegast is known as one of the industry’s most sought after screenwriters, having written for every major film studio and television network in Hollywood, working on major releases such as Speed Racer, and the Dwayne Johnson starrer The Rundown, the Vin Diesel crime-drama A Man Apart, the ancient-Greek war epic Immortals, and the Gerard Butler and Morgan Freeman action drama, London Has Fallen, which grossed $205 million worldwide.

In 2009, Gudegast wrote and produced the award-winning documentary, Sequestro, about the kidnapping epidemic in Sao Paolo, Brazil.

In between writing assignments, Gudegast is a passionate still photographer, focusing on urban landscapes. He is also a black belt in Muay Thai and Brazilian jiu-jitsu, and trains under legendary instructors Rob Kaman, Rigan Machado and Rickson Gracie.

With Den Of Thieves, Gudegast was particularly drawn to the complex relationships between professional bank robbers and the detectives who hunt them. “I was fascinated by the specificity of their worlds,” says Gudegast, “and how these two crews operate. Understanding what they do, and why they do it, became the fuel for the movie.”

Gudegast has created a character-driven narrative that turns the traditional heist film on its head. His villains are clean-living athletes and military men who are driven by the challenge of a complex mission more than just the sheer criminality. Conversely, the cops have a penchant for booze, violence, and strip clubs — a far cry from traditional hero archetypes. Gudegast was able to draw on his real-life experiences with people on both sides of the fence to conceive the Outlaws, as well as the Regulators.

Despite many development and production challenges, producers Tucker Tooley and Mark Canton have been stalwart advocates for the film. They came on board in 2006 and 2008 respectively.

“I’ve known Christian for nearly 20 years and produced the first movie he wrote,” said Tooley. “We put it together in many different configurations over the years, and for whatever reason, it always sort of unraveled at the last minute, but we kept at it.”

Canton agreed: “You have to be relentless if you believe in the story, and it takes a village to get things done.”

Despite intense interest from other producers and directors, Gudegast, who had never directed before, held out to direct his script.

Tooley and Canton were wholly supportive of his decision.

Canton notes that despite Gudegast’s inexperience, he was up to the task of directing his first feature.

“It was uncanny how prepared he’d become over the course of time, from the look books, from the screen tests, from his entire process of meeting talent along the way,” explains Canton. “His entire process is like a mother of invention story. He was super prepared because he had already played the film over in his head a thousand times. He had storyboarded everything!”

Gerard Butler sat on the script for Don of Thieves for several months, despite being urged by his agent to read it. “I think I was burned out. My agent kept saying, ‘have you read it?’ but I just wasn’t in the mood. Then I read it one weekend and it got better and better. I called my agent and said, ‘Why didn’t you tell me to read this, because it’s incredible!’”

Butler expressed an interest in portraying “Big Nick” O’Brien early on and stayed involved throughout the lengthy development process, eventually bringing his business and producing partner, Alan Siegel along, as well.

“The character’s a silverback gorilla who devours everything within reach,” laughed the director. “He’s a force. He walks in and he just takes over the environment. Nick is classic. He’s funny and he’s a badass. He’s in major crimes, so he’s got to be — he’s dealing with the worst of the worst every day, hunting them. We drilled that character all the way down and Gerry was unbelievable.”

Butler’s take on “Big Nick” is bombastic. “He lives in this world where you have to be willing to go to any length to get ahead and it’s incredibly dangerous,” said Butler. “At first you think he’s a punk, but as the character evolves, you understand he’s an obsessive and that the pressure is playing on him. He’s blown up his life for the job and is emotionally bleeding out because of it.”

“What I love about this movie is that it has a taste, an ingredient, of many of my favorite films, like Heist and Heat, with touches of a Dog Day Afternoon and The French Connection,” said Butler. “But it stands entirely on its own. It may be a complex heist film, but there’s a surprising amount of heart and emotion. It has the potential to become one of those unforgettable movies because of the characters we’ve created.”

While Gerard Butler had been involved for several years, the physically imposing Pablo Schreiber was on Gudegast’s radar from his work in 13 Hours and The Manchurian Candidate.

“I had done a movie called 13 Hours with Michael Bay, so I came in with a little bit of knowledge about the weapons. It was great to have a jump start on it; because I had some experience already, I naturally fell into a position of team leader, which was a natural fit for the role,” explains Schreiber. “We worked with a technical advisor who really got us trained up. We spent a lot of time on the range, learning the weapons together really prepared us for when we got to set.”

Butler’s O’Brien is tauntingly arrogant and brash, while Schreiber’s performance as Merriman is controlled, subdued even.

Schreiber was intrigued by Merriman’s lack of fear. “There’s a real nihilism to the character,” says the actor. “He’s not afraid of death and actually embraces the idea of it. If he’s going to go out, he wants to go out on his terms. There’s no way he’ll ever let Nick cuff him.”

As Merriman’s right-hand man, Enson Levoux, Curtis “50 Cent” Jackson gives a quietly intense performance, portraying a man who has managed to create a life and a family for himself apart from his criminal life.

Jackson first read the script six years ago and reached out to Gudegast. “He had done a whole look book of the story and it was so well put together with all of the texture and colors that he wanted. His vision for the film has been really well thought out. I wanted to do it then and there,” exclaims Jackson. “I ran into Tucker Tooley at a Golden Globes party and I approached him right away. I put pressure on him you know, ‘cause I got that rapper thing so I can act like I don’t understand. Like ‘Yo I want to be in this movie’ for real.’ Like while he had the tuxedos on and with everything he was busy with, he must have thought, ‘what’s the matter with this kid? I like his music but…Okay I understand you want to be in a movie.’ And then he changed companies but Tucker knew it was such a good project that he brought it with him. And then it made a full circle. And when I got a chance to talk to him about the film I was like ‘you don’t remember?’ and he said ‘No I remember!’ Five years ago, and here I am.”

Director Christian Gudegast has tremendous faith in what moviegoers will experience when they see Den of Thieves. “I hope it becomes like a classic; one of those unforgettable movies, because of the characters we’ve created, because of that world that they go into, that it’s exciting, that it’s visceral, that it’s surprising that there’s a lot of funny stuff in this movie. And then it’s touching and there’s that element of believability in that life and that culture. You know, as a study of that kind of world there’s a lot that people will identify with and take a lot of that home. But after all that’s said and done, most important is that they just need to have a good time.”