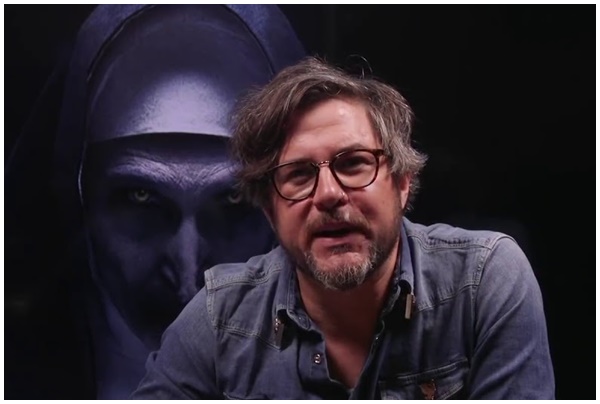 “I’m a big believer in experiencing movies in the cinema on the biggest screen possible and watching a horror movie in a crowd together is such a unique and fun, shared experience.”

The new fright-fest The Nun is directed by Corin Hardy (The Hallow) and produced by James Wan, and Peter Safran, the latter of whom has produced all the films in “The Conjuring” franchise, and delves into the shocking origin of the demonic Nun Valak, who first made her evil presence known in “The Conjuring 2.”

Hardy directed The Nun from a screenplay by Gary Dauberman (IT, the “Annabelle” films), from a story by James Wan & Dauberman.

Audiences got their first frightful glimpse of the demonic Nun Valak, who plagued Lorraine Warren’s visions and filled her with dread in the horror hit The Conjuring 2.  In “The Nun,” the epic battle of good vs. evil pits a priest with a dark history and a novitiate whose own past isn’t the only thing that haunts her against the blasphemy that is the Demon Nun.

Director Corin Hardy is an award-winning filmmaker, illustrator, sculptor and writer, whose visual style mixes the macabre, the beautiful and the epic to visually dazzling results.

Hardy grew up in a world steeped in creatures and creativity, beginning his early career aged 12 as a special FX monster-maker in his parents’ bike shed. Inspired by an unquenchable diet of Ray Harryhausen animated monsters and ‘70s and ‘80s horror cinema, he made a number of Super-8 films with school-friends who regularly stood in for his cast of zombies, werewolves and slasher victims and created elaborate sets to make plasticine stop-motion epics in his bedroom. Throughout his teenage years, Hardy gained film experience in sculpting, FX, wardrobe & art departments on a variety of film, tv & theatre productions ranging from a Royal National Ballet production of “Dracula” to the film “First Knight.”

Hardy studied theatre design at Wimbledon School of Art before hand-crafting his own award-winning stop-motion short film “Butterfly” in 2004, which premiered at the Edinburgh Film Festival, garnering rave reviews, and winning the Brussels Animation Festival for best animated short. Soon after, he was signed to Academy Films where he directed a series of short films and narrative driven music videos in his own signature style, for a range of mainstream and underground bands, including The Prodigy, Keane, Biffy Clyro, Olly Murs, Paolo Nutini and The Horrible Crowes –culminating in a nine-minute crime epic for Devlin and Ed Sheeran’s cover of “Watchtower.” His music videos have accrued over 300 million views and won numerous awards around the world.

How does The Nun fit into the Conjuring film universe?

It was important to me to honor what has been set up in the Conjuring universe by James Wan, and I was thrilled to do so, but telling you about some of those connections would reveal a little too much, and I want to preserve the surprises!  At the same time, I wanted to give audiences something new, something a little different from what they might expect. In this film, we follow an exorcist, a novitiate nun in training and a French-Canadian guide on a journey that takes them to an abbey in the mountains of Romania, to investigate the apparent suicide of a nun. I wanted to transport the audience along with these investigators as they embark on their mysterious mission and inject it with a bit more action and adventure. As such it’s a slightly different type of movie compared to what has come before…

James Wan has said that he looks to each director to bring his or her unique vision to these films.  When you read the script, what did you want to bring to The Nun?

I loved that The Nun is set in 1952 and in a castle in Romania – making the story feel both new and ancient. I wanted to take audiences on an unholy, terrifying journey.  It gave me a real opportunity to incorporate classic horror imagery this time around.  Using castles, convents, cemeteries, hanging fog, gaslight, candlelight, stained glass and gothic horror, we created a rich, contrasting and immersive cinematic atmosphere. It harks back to a lot of movies that I grew up loving, like Dracula, the old gothic Hammer movies, the Italian films of Dario Argento and Lucio Fulci, Friedkin’s The Exorcist and Raimi’s Evil Dead. The adventure aspect of THE NUN even has a hint of Indiana Jones and the Temple of Doom, where the characters journey to a place that’s potentially no longer holy and have to uncover the mystery that lurks inside it. So, THE NUN contains all the elements I relish as a storyteller.

You mention the film’s adventure aspects, but it must have been an adventure for you and the production to film in Romania.

Absolutely!  It was a wonderful opportunity to actually make a movie in Transylvania, which was home to the classic Dracula.  We started production in Bucharest, where we had our studio and built certain sets.  But we also traveled to far-reaching locations up in the Transylvanian mountains, to Corvin Castle, Sighisoara, and rural Romanian villages.  It was as authentic as I could hope for.  I was able to tick a lot of boxes off my list, after working in and around ancient crumbling convents, an ice house and a castle.

We had a mixed crew – from the U.S., Europe and Romania.  It was a formidable challenge for our production designer, Jennifer Spence and her team to build and enhance castle locations that were seven hours away from our home base / studio.  My director of photography Maxime Alexandre brought techno-cranes and tracks into some pretty challenging environments!

And it was a childhood dream to work with ADI [Amalgamated Dynamics, Inc.], which did our character/creature effects. They have been heroes of mine since I grew up wanting to be a monster maker and FX artist, and have worked on so many iconic genre films, like Pumpkinhead, Aliens, Alien 3 and many, many others – most recently, It and Annabelle Creation.

Let’s talk about the actors who play your two leads.  Why were Demián Bichir, who plays Father Burke, and Taissa Farmiga, who portrays Sister Irene, right for this film?

All the films in the Conjuring universe have had really strong casts, beginning with James Wan’s The Conjuring, with Vera Farmiga and Patrick Wilson. I really wanted to uphold that quality.

I’d first seen Demián in Steven Soderbergh’s Che film series.  His performance as Fidel Castro really impressed me, as did his work in Quentin Tarantino’s The Hateful Eight. When his name came up for THE NUN, I thought he could be an interesting choice because I thought of Burke as almost like the “Dirty Harry” of exorcists.  Burke has been in some tough situations and carries this burden of guilt because years earlier, a young boy had died on his watch.  When the Vatican calls on Burke to take this new mission, he’s not happy about the fact that he has to take a novitiate with him.  So, we needed an actor who could pull that off, and I knew with Father Burke, Demián would create a classic iconic character.

Burke and the novitiate, Sister Irene, are opposites.  He’s grizzled, gruff and experienced, while   she’s an innocent who doesn’t yet know what her calling is, or if becoming a nun is even right for her.  This journey with Burke will take her from a safe environment to an encounter with a great evil that will expose her inner strength.  I watched hundreds of audition tapes for this role, and initially we were looking for someone from Europe or England to play Sister Irene.  But when I saw Taissa, I knew there was no need to see anyone else.  She HAD to play this role.  Taissa has something in her eyes which lends itself to the horror genre – in her audition tape, it felt like she was going through a supernatural experience… like she’s capable of seeing something you can’t see.  It was such a pleasure to work with her, with Demián and with Jonas Blouquet, who plays Frenchie.  They were all committed to the characters and the film, and we had a lot of fun.  But it was also challenging, having to go through a lot of darkness together… [laughs].

There were also a lot of physical challenges that came with their roles.  How did they handle those?

I took them through my storyboards and designs in detail and explained what I wanted the movie to be.  I wanted to make the actors as comfortable as possible.  Demián and Taissa spent a lot of time in the water, and Taissa was actually dragged underwater, as was Bonnie Aarons, who plays The Nun.  And Bonnie had to do it in full nun makeup and nun habit.

Bonnie reprises that role from The Conjuring 2.  Did you know her from that film?

I wasn’t familiar with Bonnie, but I knew she had to return for The Nun.  Bonnie has one of those classic faces and personalities.  Later, I remembered that she had been in Mulholland Drive ­– and that her performance had nearly given me a heart attack.  There’s a moment in that film when she plays a homeless person at the end of an alley, and she comes out from behind a wall, and she is incredibly frightening in just a single brief shot.

The Nun is an origin movie and you get to find out where this character came from, and where Valak came from.  So, we get to show more of The Nun and explain a little more about her.  But we also didn’t want to show too much or explain too much.  Being a fan of the horror genre, I think it can be a mistake to explain too much about a character like this.  Every character needs to remain a little mysterious to stay scary.

What do you hope audiences experience when the see The Nun?

I’m a big believer in experiencing movies in the cinema on the biggest screen possible and watching a horror movie in a crowd together is such a unique and fun, shared experience. I want to take audiences on a scary, spooky ride where they can become fully immersed along with our characters, as they follow them into this mysterious and terrifying world of shadows and prayers, and nuns and demons – to discover the truth of who, and indeed what lurks in the dark tunnels of that ancient abbey…