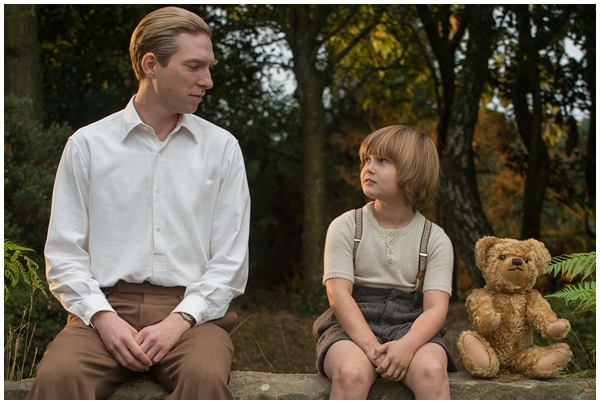 It’s the story of the family that created the Winnie-the-Pooh stories, how they became famous on the back of the stories, and the impact that had on their lives.

Goodbye Christopher Robin is the inspirational story of how a father bonded with his young son and created the much-adored Winnie-the-Pooh books.

The film is based on Ann Thwaite’s 1990 biography A. A. Milne: The Man Behind Winnie-the-Pooh, which was re-released in 2017 as Goodbye Christopher Robin: A. A. Milne and the Making of Winnie-the-Pooh. The newer version contains a preface by the movie’s screenwriter, Frank Cottrell-Boyce (The Railway Man),  who also wrote the screenplay for the film directed by Simon Curtis.

Goodbye Christopher Robin gives a rare glimpse into the relationship between beloved children’s author A. A. Milne and his son Christopher Robin (Will TIlston), whose toys inspired the magical world of Winnie-the-Pooh.

Domhnall Gleeson (About Time, Brooklyn) stars as Alan Alexander Milne, a successful playwright and humourist who was traumatised after serving as an officer with the British army during the First World War and carried the horrors of the battlefield into peace time but, like so many men of that generation, rarely spoke of it.

Like many families of the time, A.A. Milne (Domhnall Gleeson) and his wife Daphne (Margot Robbie) had a live-in nanny, Olive (Kelly Macdonald) who looked after their eight year-old son, Christopher.

Along with his mother Daphne, and his nanny Olive, Christopher Robin and his family are swept up in the international success of the books; the enchanting tales bringing hope and comfort to England after the First World War. But with the eyes of the world on Christopher Robin, what will the cost be to the family?

The real A. A. Milne and his son Christopher Robin, and Domhnall Gleeson and Will Tilson playing them in the film

“I loved the idea that behind the creation of this world famous children’s story was the story of a family,” says director Simon Curtis. “When he came back from the war he was damaged, he was a lost soul,” says Curtis. “And then by chance he stumbled upon the joy of being a parent.”

When the story starts, in the 1920s, it was a time, notes Domhnall, when families weren’t so openly affectionate in the way that many are today. “We’re all a lot more lovey-dovey now,” he says.

“There are far more displays of affection between parents and children now compared to when I was a kid and at that time, when Milne was a parent, it was almost unheard of.”

Margot Robbie, who plays Milne’s wife Daphne, agrees “Parenting was very different at that time,” she says. “You’d see your child for half-an-hour in the morning and that was normal. It wasn’t neglectful, that’s just how it was. Daphne was a very strong woman and she had her flaws, too.”

With Daphne away in London and Olive visiting her sick mother, Milne is left to look after his son at their idyllic home, Cotchford Farm, in the heart of the beautiful East Sussex countryside.

Gradually, the traumatised war veteran who had found it difficult to connect with his son begins to bond with Christopher: playing games together, going for long walks in the woods and creating stories involving the boy’s teddy bear, Winnie.

“Our film is also about how stories are created and the complexity of how they are created,” says Curtis (My Week with Marilyn, Woman in Gold). “And in some ways it’s about England where we are the home of some of the world’s greatest storytellers and yet we find it difficult to say ‘I love you.’”

Bonding with his son helped Milne recover from the horrors he had experienced during the war, says Gleeson.

“It was sometimes called shell shock back then, a version of post traumatic stress disorder, and one of the things that helps is nature and being around new life and being able to start communicating with people again – these are paths through trauma.

“And I believe that this is what Alan Milne found – he stopped looking sideways at things and instead concentrated on something beautiful, his love for his son.

Director Simon Curtis with Will Tinston during filming

“He began playing in the woods with Christopher and making up stories for his son. He opened his heart up to something and let himself be vulnerable and wrote something ridiculously gorgeous for this son and those stories became Winnie-the-Pooh.”

Producer Damian Jones agrees and adds: “Our story is really about fathers and sons and about parenting,” he says. “And at the same time telling you the origins of Winnie-the-Pooh.

“After the war Milne was writing these sort of Noel Coward light plays, still very successful but not feeling very fulfilled. He has a very traditional relationship with his son and the child is mostly brought up by the nanny and then sees his parents just before he goes to bed.

“They move out of London to the countryside and Daphne has to go back to London and, due to a family emergency, the nanny has to go to, leaving Milne alone with his son and suddenly he has to really be a father for the first time.

“And he really starts to connect with the boy and starts to love that bond. He starts writing about the games they play which, in turn, become the Winnie-the-Pooh stories.”

The family’s nanny was a huge part of Christopher’s childhood, spending hours with Christopher Robin each and every day. “There are photographs of her,” says Kelly Macdonald who plays Olive. “And Christopher Robin Milne wrote about her a lot in his lovely book- she comes up all the time. So there was obviously a real love there.

“It was an important relationship for him. His parents weren’t exactly absent, but they were very much of the time and at that time a nanny played a big part in raising a child.”

Winnie-the-Pooh, a collection of stories about the lovable bear and his adventures in the English countryside with his friend Christopher, featuring a host of memorable characters including Piglet and Eeyore the donkey, was published in 1926, although Winnie had made an appearance earlier, in a poem published in Punch Magazine, where Milne worked deputy editor.

The stories of innocence and the wonders of childhood immediately captured the imagination of a world still traumatised by world war. A second volume, The House at Pooh Corner, again illustrated by E. H Shepard (played by Stephen Campbell Moore in the film), was published in 1928. “They were written at a time when the world was desperate to recapture the innocence that had been lost in the war,” says Curtis.

In the public’s mind Christopher Robin, the character in the Winnie-the-Pooh stories, and the real child he was based on were one and the same and, says Gleeson, as he grew older Christopher struggled with life in the public eye.

“I think in a way Alan Milne was trying to solve his own problems in writing Winnie-the-Pooh and trying to give a gift to his own son and to the world and it caused more bother for his son than he ever could have known,” he says.

“It’s really interesting because he tried to use this boy’s innocence to show the world a better place and in doing so took the innocence of the boy. Now everybody has their innocence taken from them, that’s part of growing up, but it was taken pretty early from Christopher. So there is a whole story behind Winnie-the-Pooh that I think is quite important and very unusual.”

Curtis points out that child celebrities were rare back then. “Fame is a very modern subject. And if you do the research Christopher Robin, along with Shirley Temple and The Queen when she was a child, were the prototype child celebrities.”

Gleeson admits that when Curtis first sent him Frank Cottrell-Boyce’s script he didn’t know much about Milne or, indeed, his most famous creation, Winnie-the-Pooh.

“I didn’t even know what Winnie-the-Pooh looked like. I knew what the Disney version looked like but not the original drawings, which are beautiful and mean far more to me now,” he says.

“I knew very little and when I came on board and was talking to Simon my point all the time was that the film would have to mean as much to people who knew nothing about Winnie-the-Pooh as it would to people who knew about him because really it’s a story of a family and the post war society.

Ms Robbie certainly did know the stories and has loved them ever since her mother used to read them to her each night at bedtime back in Australia.  “I play Christopher Robin’s mum and in the movie I do the voices of the animals and act things out for him when I’m reading him the stories,” she says. “And my mother used to do the same thing for me.

“And when I was going to sleep I’d have my Winnie-the-Pooh bear with me and a Tigger as well. And Mum would act out the stories, do the voices for the characters, and I found it hilarious. It was my favourite thing ever.

“So when the script came to me I was like ‘yes!’ I really wanted to do it immediately because it’s so reminiscent of my own childhood. I called my mother and said ‘you won’t believe what I’ve just read.’ And I told her about how Daphne reads to her son and said ‘it’s exactly what you used to do for me.”

Cottrell-Boyce’s screenplay has a ‘magical quality,” she says. “It’s so well written and it evoked a lot of emotion in me. It felt really, really magical – that’s the only way I can describe it.

“In our story you get to see the impact that fame has on Christopher and his family and you also see the impact of war on all of them. Alan Milne quite possibly had some form of PTSD (post traumatic stress disorder), which wasn’t really labelled back them and we see how that can affect a family.”

The film spans almost two decades and starts in the 1920s when Milne, a successful playwright and humourist with Punch Magazine, has returned from the First World War, clearly traumatised but reluctant, as were many men who fought in France, to talk about what he had witnessed.

Gleeson loved the script but knew, too, that making Goodbye Christopher Robin would be a challenge. “It was a difficult one but made much easier by the quality of the people involved,” he says. “The material is not necessarily what you think it might be when you think of anything to do with Winnie-the-Pooh.

“And given Milne’s history there was a fair amount of research to do before we started and there were a lot of difficult moments that he went through in his life, particularly having fought in the war, and that stuff was challenging to take on and different to what I’d done before. So it was a difficult job but I was very happy that I was working with such amazing people because that makes it all a lot easier.”

That challenge was, he admits, part of the appeal. “Certainly, yes. There was enough about this that was meaningful and different to things that I’d done before to really make me want to get involved. It was incredibly interesting and it got more interesting as different people came on board.”