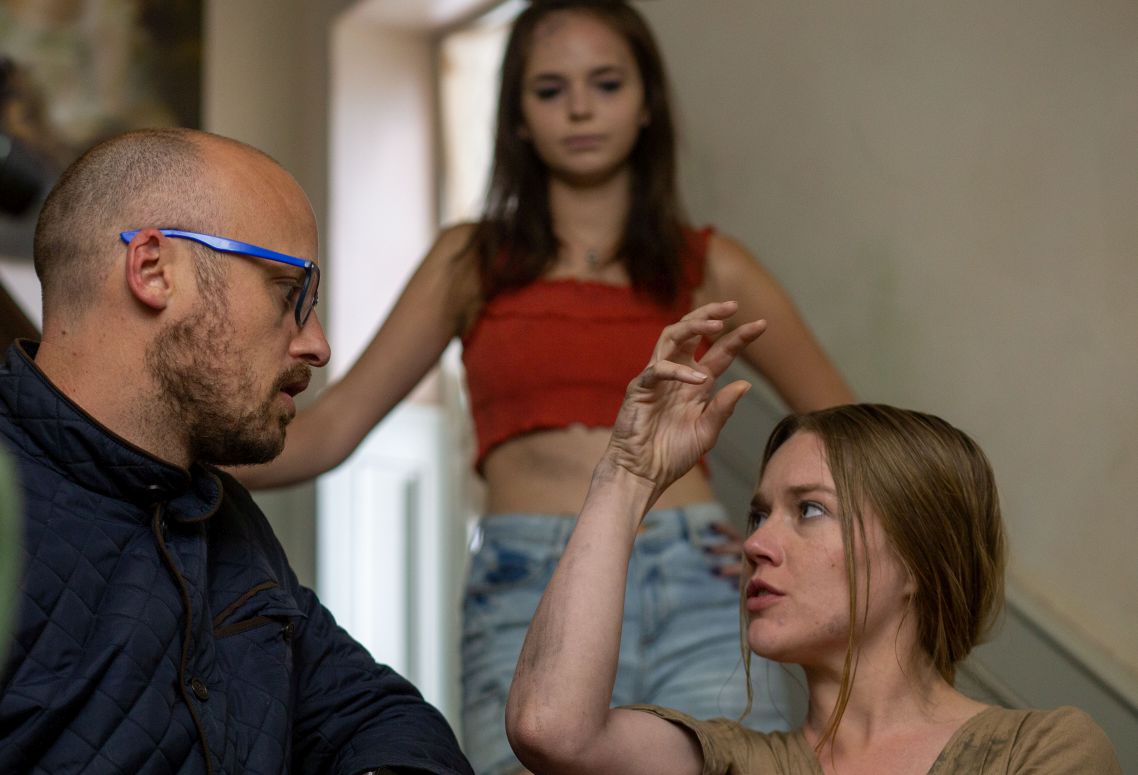 Henk Pretorius during filming of The Unfamiliar.

One of the first steps Henk Pretorius took before launching his career in filmmaking, was a workshop with The Writing Studio at the age of 15 at the State Theatre in Pretoria. As he filmmaker he rooted his career with some of South Africa’s most loved comedies and dramatic features – the Bakgat trilogy, Fanie Fourie Se Labola, Leading Lady – and co-founded the Britain-based company Dark Matter Studios in 2012 with Llewelynn Greeff. He directed The Unfamiliar in 2020 which was released on the virtual market.

The last time we saw each other we were having drinks in Greenpoint before pursuing our dreams, now we are living in a world we could never have imagined…

My dad use to say: don’t forget to celebrate life, to slow down sometimes and to acknowledge how mythical it all is. And that’s something that stayed with me and got a more poignant meaning in the current pandemic.  Even though it is devastating to a lot of people’s livelihoods, and I have immense empathy for them, I do feel that the pandemic had a lasting, and dare I say ‘positive impact’ on me. I have never wanted to create more and appreciated that I have always been able to make films than now.

Although the dreams of many filmmakers were hijacked by the outbreak of the pandemic, you persevered, being fervently proactive in the pursuit of releasing your first film in Hollywood.

We had to adapt our cinematic release in the USA to a ‘digital release’ overnight. And it was with a clear plan, lots of effort and the support of a major distribution company in the USA that we have been fortunate to still matter as a film in a very cluttered market space.

I think cinema has changed forever, but in the creative world of storytelling, we have found a new way to reach audiences. There are lots to do still seeing that The Unfamiliar is going out across the globe, and in some countries, cinematically, but we have embraced the opportunity to adapt and to evolve.

You moved from familiar grounds in South Africa to The Unfamiliar. What sparked this remarkable journey?

Thank you for the compliment. When you go to LA and London as a filmmaker, you do start your career over. In South Africa, I was at a point in my career where filmmaking was what I did as a job, and abroad I had to fight for that privilege again.

What motivated me to take on the fight was my A-type personality, not that I always buy into the concept of having a ‘personality’. But the idea to throw me into a deeper pool and to see if I could swim out it. I knew if I did end up “swimming” I would learn a bunch of new skills, and that may ultimately (hopefully) make me a more well-rounded human and filmmaker.  Yet, to quote my AFDA Professor: there is still a price to pay. The price I had to pay was to give up my entire safety net. Luckily, I have teamed up with a phenomenal business partner and producer: Llewelynn Greeff, and we supported each other in this quest.

To borrow a rugby analogy: South Africa is like playing the Curry-cup with your national team. And making a film in the UK, for a predominantly USA market is similar to the world cup. You are competing against the best of the bests. And you are honestly learning as you go and hope you know enough to get to the next stage, which will ultimately lead you to a more significant challenge.

Fortunately, in the filmmaker world, I am still (relatively) young, with hopefully lots of years in front of me. I look forward to growing my skill level and understanding of the human condition as I go along.

Your film The Unfamiliar resonated internationally with a world suddenly enveloped in fear? It also strikes an important chord of how families cope when ‘horror’ strikes and divides loyal bonds?

You have summed up the thematic very well.

Horrors have always been a relevant genre abroad, yet I do feel that The Unfamiliar sums up what the world is currently going through. At the core of the film is a mother trying to keep her family safe, and I feel that thematic does strongly resonate with audience members worldwide.

I recall witnessing the levels of anxiety that the test screening audience walked out with after seeing The Unfamiliar and thought to myself: it kind of feels like I should apologize for scaring them. But that is the point of making a horror film, yet I do apologize in advance for any additional anxiety that was caused by the film.

Or maybe horror films help us deal with our anxiety through a “safe” space to vent it. That idea makes more sense in my head than when I am saying it aloud, but horror fans often tell me that they enjoyed the film because it allowed them to vent their own (personal) anxiety.

What inspired The Unfamiliar?

I was hanging with marines in LA at the time, just after their service in Iraq. I asked them all kinds of deeply personal questions about the war, and they chose to answer some of them. The way they chose not to discuss their own unique PTSD and the scars that the war left really intrigued me and the co-writer. So, we started thinking of creating a horror film that takes a look at a returning soldier with the possibility of him/her having PTSD.

Jennifer Nicole Stang, the co-writer of the film, told me about the wealth of Hawaiian mythology that she experienced in her research and also visiting the island. She shared these thick books she was reading, and it contained a treasure trove of mythical characters in it.

We then joined the two ideas together, and The Unfamiliar was born.

Did you write the story/screenplay first before teaming up with screenwriter….

It was a very organic working relationship from day one. We worked together on all the facets of the story, and I can honestly not remember who wrote what.

Tell me about your process of co-writing the screenplay

In my career as a filmmaker, I have always enjoyed spotting talent and seeing what facets they can bring to a story. What I liked about Jennifer’s writing were her discipline to the story world we created and her incredible research and work ethic. I worked with loads of different screenwriters before, and sometimes alone too. But every experience is very different. With Jennifer, we would discuss each scene in detail, make notes and plot out the film together. We would then take turns in writing a draft. Whoever didn’t write the draft, will then write the next draft.

As a screenwriter you need to be subjectively involved while writing a screenplay and then an objective observer after you write it and analyze where the screenplay can be better. Sometimes becoming objective about the screenplay is accelerated when writing with a trusted writing partner, because you get pulled out of your subjectively about your work, quicker. This was the case with our writing relationship on the script.

Some writers are not secure enough to take criticism or take it as a personal attack on their self-worth, in that case it’s best to just write the screenplay on your own and to suffer through it alone.

Writing a screenplay is one of the most rewarding and awfully self-loathing things to do as a career choice. Until you one day realize that the job involves holding up a mirror and what you are really doing is self-actualizing in the process, the more conscious you go through it, the more you get from the actual work as well. When that happens, writing becomes like therapy and that is why I love it now.

I have now created content in most genres and formats; however, my grammar and spelling are still poor. Luckily, I have been using my trusted proofreader: Jané Fourie that has helped to hide the fact that English is my second language for years.

It was a tough film to shoot because it was medium intensive with an independent budget, that Producer Llewelynn Greeff headed and raised with a team of indie producers and financiers.

We also shot the film in England, with a British crew and it felt like making my first film again.

I am very grateful to have been able to make this film, and it showed me what is possible to work as a team.

Every aspect of making a film evolves teamwork.  Your film is ultimately only as strong as the sum of all parts, combined with a strong vision. With Llewelynn and myself we each have a separate list of things that we are responsible for, yet we both know that we can always rely on each other should we need to. It is a kind of symbiotic, egoless, relationship that is governed by our mutual goal to create wealth through content.  And with wealth, I also mean a wealth of stories, not just in the monetary sense.

To find someone that you can trust as a business partner is very rare, but it does accelerate the speed in which one can achieve the sometimes almost impossible, together. Llewelynn calls this phenomenon: ‘the speed of trust’, and this is something that I am grateful to share with him in Dark Matter Studios.

The consumption of content has grown by 30% since the lockdown, digitally. We have designed a digital marketing strategy that may develop into an agency that specialized in this space. However, we feel that there is a much more potentially lucrative model that we, as a content creator, should look at ‘investing’ in. We are currently building towards filling this space. I am unfortunately not allowed to say anymore, but I do feel that what we are about to do is going to push our reach as a company with our value significantly up.

I think the market will now be full of people that want to write, but with little producers left that can make/finance your screenplay. I would think smaller budgets, and with smaller cast members. One of the projects I am about to shoot has only six cast members in total and plays off “around the block”, we will probably be able to finance the pilot episode in a few days. This may turn into the next big show. Alternatively, be sold to a list of platforms as a once-off digital piece of content.

If you aim to make anything bigger than something you can ‘shoot around the block’, I would suggest the attachment of an A – list cast, with enough money and a strong enough concept, to compete internationally. If all goes to plan, we are shooting a similar project in February with this model I will be more informed to comment on it after I have completed the project.

What do ultimately hope audiences will get from their ‘Unfamiliar’ experience?

To not take your safety and security for granted and to enjoy and to protect it. To me, the film is an anti-war film, but I have realized that audiences only get that from viewing it a second time.

What’s next for Dark Matter Studios?

We are shooting a pilot for a television show in a few weeks. We are then shooting a feature film that I have been working on for years this coming February. And we are also busy with an entirely new business model that has the potential to be embraced within the brave new world. We shall see, I don’t take much for granted anymore and I am honestly just thrilled to be a position of doing what I love.