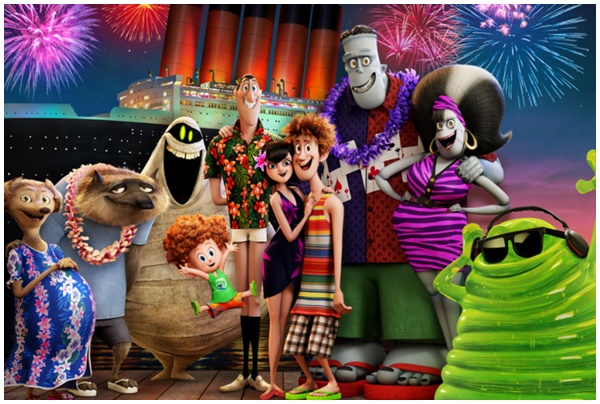 For Genndy Tartakovsky, co-writer and director of Hotel Transylvania 3: A Monster Vacation, returning to the Hotel Transylvania characters was not a simple decision. Simply put, there had to be a reason for him to come back and make another one – a seaworthy sequel.

“I love the characters, but if we were going to do a third film, we had to take them someplace they’ve never been before – both physically and emotionally,” says Tartakovsky. “That’s what we’re doing here. Not only are Drac’s Pack out of the hotel and visiting fun, exotic locations on a
monster cruise, but we’ve turned Drac and Mavis’s relationship on its head. Instead of Drac being the concerned parent as his daughter falls in love and has a child, now Mavis is overly
concerned as her father ‘zings’ for a second time. Or maybe she’s not overly concerned – maybe he’s in real danger.”

In Hotel Transylvania 3: A Monster Vacation our favorite monster family embark on a vacation on a luxury monster cruise ship so Drac can take a summer vacation from providing everyone else’s vacation at the hotel. It’s smooth sailing for Drac’s Pack as the monsters indulge in all of the shipboard fun the cruise has to offer, from monster volleyball to
exotic excursions, and catching up on their moon tans. But the dream vacation turns into a nightmare when Mavis realizes Drac has fallen for the mysterious captain of the ship, Ericka, who hides a dangerous secret that could destroy all of monsterkind.

Award-winning animation visionary directed by Genndy Tartakovsky, the screenplay was crafted by Tartakovsky and Michael McCullers.

Tartakovsky says that the inspiration for the new film came directly from his real-life experience.

“After I finished the second film, I needed a vacation – and my in-laws surprised us with a family
cruise,” he notes. “I’m sure everyone loves their in-laws as much as I do, but the cruise forced us all to be together in a small space for a week. That inspired me – what would happen if you put Drac’s Pack in that situation?”

Producer Michelle Murdocca, who has teamed with Tartakovsky on all three films in the series, loved the idea. “It was a chance to get out of the hotel and go on a family adventure in a new way,” she says. “I think the Hotel Transylvania films connect with families because they’re about families,” says Tartakovsky. “Sure, every family is different – but really, everybody’s kind of the
same. And that’s what makes the movies connect all over the world.”

Still, everyone knows that being on a family vacation can be a mixed bag. You love your family and want to be together… But if you’re a kid, your parents embarrass you. For the parents, your kids run you ragged until you need a vacation from your vacation. Your grandpa shows up in his swim briefs. And as we all know by now, monsters are just like us.

“The fun is how relatable they are,” says producer Michelle Murdocca, who like Tartakovsky returns for her third tour of duty in the Hotel Transylvania franchise. “We’ve known for some time that Dracula, Frank, Wayne and Wanda the wolfpeople, and Griffin, an invisible man, have all had their heroic moments and their foibles and are just trying to get along as best they can in a world that isn’t always accepting. The moral of the story is we’re all the same – human and monster, green skin or no skin at all – but our family has never faced a greater danger than Ericka.”

After all, Ericka is not merely the beautiful, smart, adventurous captain of the ship who could steal
Dracula’s heart (if vampires have hearts) and alter the family dynamic forever. She also holds a secret that threatens to send this journey off course – it just so happens that she is a descendent of Abraham Van Helsing, the legendary monster hunter, and the whole idea of a cruise is a ploy to get Drac and his pack. It’s a trap. A ruse. A cruise ruse.

“Ericka’s whole plan is to get all the monsters on board and destroy them all, but she’s impatient – she wants to kill Drac right away,” Tartakovsky explains. Meanwhile, Drac unwittingly throws a monkey wrench into those schemes when he ‘zings’ for the captain. “’Zing’ is the monster version of love at first sight. He gets on board, sees Ericka, and he’s a goner. So he’s trying to help her fall in love with him, and the whole time, she’s trying to kill him.”

The setting opens up a whole new world for the characters, Tartakovsky says. “There’s even more visual humor, more fun than the first two films,” he says. “It’s not just a cruise – it’s an adventure. They get to explore new and exotic locations – including the lost city of Atlantis. But there’s also real danger involved as they start to wonder if Ericka, the ship’s captain, is leading them right into a trap.”

That visual humor is Tartakovsky’s signature, perhaps best expressed through what he calls a “pushed” style of animation that marked the first two films. Where most CG animated films try to keep the character looking like a base model – treating the character rig like a puppet – Tartakovsky encourages his animators to bring an exaggerated vision, with sight gags and funny expressions.

The characters are pliable, with a range of emotions from the cartoony to the subtle and humanistic. “The Hotel Transylvania films really are a chance for the animators and artists to collaborate with Genndy, giving them an opportunity to live inside Genndy’s head for a little while,” says Murdocca. “Our animators love the challenge of breaking the mold and showing the wide range of expressions and over the top physical animation that are possible in the name of bigger emotion and bigger laughs.”

Bigger laughs – like Gremlin Air, where the little monsters that make your flight go wrong have been
put in charge… like the Bermuda Triangle, which is a literal triangle that eats up planes and ships…
relaxing times like moon bathing (can’t be in the sun), an underwater volcano, scuba diving, dolphin
surfing… let’s face it: monsters may be just like us, but their vacations are way different (and way
better).

And that doesn’t even include the monsters’ final destination: the lost city of Atlantis. “It’s our version of Vegas,” says Murdocca. “From the depths of the ocean arises a massive kraken – and just when you think this is it, he breaks into a charm-filled full-on Sinatraesque song, courtesy of Joe Jonas.”

Hotel Transylvania 3 represents a huge step forward for the monsters – and the animators – with
the biggest adventure by far. “This film is a lot bigger than the first two films – it eclipses them in scope and scale,” says Tartakovsky.

“There are all kinds of new locations. We get to see the Bermuda Triangle, the lost city of Atlantis, an underwater volcano – these are the grand-scale places that monsters can go to take a break. It’s
comedic spectacle.”

It all starts with the storyboards.

Where other films employ a storyboard artist to make a rough plan, Tartakovsky boards the entire film himself (roughly), with the artist drawing over his sketches. “I’ve worked for a lot of directors and they’re nothing like Genndy,” says production designer Scott Wills.

“He sees the movie and knows the movie he wants to make. You can watch the animatic [a cut of the film created from storyboards] and it’s very clear what he wants. It’s because Genndy comes from TV, where the storyboards get sent overseas to be animated; everything has to be planned out. He does the same thing in features – the storyboards are really the template. Everything is very clear and he knows what he wants.”

Tartakovsky also takes writing credit for the first time in the franchise with this film, sharing credit with Michael McCullers. “A lot of Genndy’s sensibility is written into the bones of this movie,” says Senior Animation Supervisor Alan Hawkins. “On the previous two films, we always had to look for ways to work Genndy’s magic into the scenarios with a lot of dialogue. With this movie, there’s a lot less dialogue and a lot more is dependent on the visuals. There are all kinds of crazy locations that help the visuals go that much further – like an underwater volcano or dancing your way through a bunch of booby traps.”

Genndy Tartakovsky was born and raised in Moscow, Russia (“I’m still fluent in Russian, but it gets a little worse every year!” Genndy admits jokingly). His family first moved to Italy before coming to the United States, first in Columbus, OH when he was seven years old then Chicago, IL two years later. After high school, Genndy studied film at Chicago’s Columbia College before moving to Los Angeles to study animation at California Institute of the Arts (CalArts).

A 20-year veteran of the art, Tartakovsky has received an impressive 15 Primetime Emmy Award nominations and been awarded three Emmys for work on the series Star Wars: Clone
Wars and Samurai Jack, both for Cartoon Network.

Named one of Variety’s 50 to Watch as a future leader in the entertainment industry, Tartakovsky has been called “one of the industry’s rising stars” by People magazine and has been tapped as one of the most creative people in entertainment when he was named to Entertainment Weekly’s It List. He is also the recipient of the prestigious Winsor McCay Award in recognition for outstanding career contributions to the art of animation.

Tartakovsky’s creative leadership helped shape the direction and the rise to national prominence of the Cartoon Network, where he developed four hit animated series between 1994 and 2010: Dexter’s Laboratory; Samurai Jack; Star Wars: Clone Wars; and Sym-Biotic Titan. He created the critically acclaimed Samurai Jack as a follow-up project to the massive success of Dexter’s Laboratory, his first professional cartoon creation, on which he served as creator/writer/director. Samurai Jack originated from his desire to create the best action-adventure cartoon ever—and the result was an animated action television show that is cinematic in scope and that incorporates action, humor and intricate artistry. A two-time juried Primetime Emmy Award winner for layout and production design, Samurai  Jack is a perennial critic and audience favorite.

Tartakovsky was hand-selected by George Lucas and Lucasfilm Ltd. in 2003 to create Star Wars: Clone Wars, a one-of-a-kind 20-episode “microseries” that continued the saga where the live-action feature film Star Wars: Episode II Attack Of The Clones left off. His cartoon creation—the first-ever animated property involving the leading Star Wars characters—covered the beginning of the Clone Wars, an epic civil war that pitted the old Republic against a vast separatist movement led by the forces of evil.

Michael McCullers is a comedy writer and director who works in feature film, television, and animation. After beginning his career on the staff of Saturday Night Live, he made his screenwriting debut with the hit comedy Austin Powers: The Spy Who Shagged Me, and collaborated with Mike Myers on its sequel, AGoldmember. He wrote and directed Baby Mama starring Tina Fey and Amy Poehler, and his last animated feature, Boss Baby, was his fourth film to open number one at the box office, grossing over $500 million worldwide.