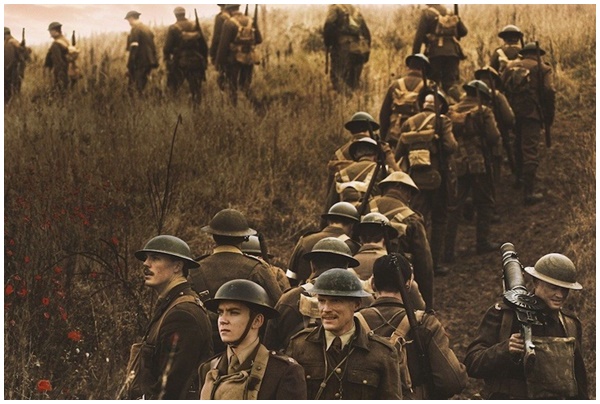 Journey’s End will entice not just cinephiles or those aware of the cultural significance of Sherriff’s play, but also a younger demographic even though it is being released at a time when superheroes, sequels and reboots hold sway.

Getting R.C. Sherriff’s celebrated 1928 play Journey’s End to the screen was a journey in itself. The play was previously adapted in 1930 – the feature debut of James Whale, no less – and remade in Germany the following year as Die Andere Seite (The Other Side).

March, 1918. C-company arrives to take its turn in the front-line trenches in northern France led by the war-weary Captain Stanhope (Sam Claflin). A German offensive is imminent, and the officers (Paul Bettany, Stephen Graham Tom Sturridge) and their cook (Toby Jones) distract themselves in their dugout with talk of food and their past lives. Stanhope, meanwhile, soaks his fear in whisky, unable to deal with his dread of the inevitable. A young new officer, Raleigh (Asa Butterfield), has just arrived, fresh out of training and abuzz with the excitement of his first real posting – not least because he is to serve under Stanhope, his former school house monitor and the object of his sister’s affections. Each man is trapped, the days ticking by, the tension rising and the attack drawing ever closer…

“The idea to adapt the stage play came initially from our executive producer Sir Anthony Seldon,” says writer/producer Simon Reade. “He suggested it to Guy [de Beaujeu], my fellow producer, after he had seen another First World War movie we made, Michael Morpurgo’s Private Peaceful. He believed Journey’s End could be a totemic First World War film.”

Reade, at this stage, had no intention of writing the screenplay. While he had previously written both films that he had co-produced with de Beaujeu – Private Peaceful and Shakespearean mockumentary What You Will – he says, “The idea of turning a brilliantly crafted play into a screenplay wasn’t something I’d usually entertain.”

Seldon pointed the producers in the direction of the little-known novel that R.C. Sherriff had penned with Vernon Bartlett.

“The play was so successful and the James Whale film was so successful, that Sherriff was persuaded to novelise the play,” explains Reade. “I started to read it and it was a goldmine. Not only did Sherriff and Bartlett move stuff outside the dugout, to go along the trenches and over the top, but they also went into more subtext. Sherriff actually wrote it, I think, with the eyes of a film writer, because he was writing a screenplay adaptation at the same time of The Invisible Man, and as we know he famously went on to do The Four Feathers and The Dam Busters and Goodbye, Mr. Chips.”

Reade set about the adaptation, always mindful to strike the correct balance between scenes set in the officers’ dugout and scenes that take place with the men in the trenches. The action also spills over the top into No Man’s Land on one harrowing occasion, while a couple of sequences set back at the Company HQ further open out the story. All of this is done without ever lifting the lid to allow the simmering tension to escape.

Reade has wide experience as a producer, writer and director working in film, theatre and TV. He was Literary Manager at the Royal Shakespeare Company, Drama Development Executive at Tiger Aspect Productions, a script editor at BBC TV, and Artistic Director of Bristol Old Vic.

“Sherriff’s working title was ‘Waiting’,” says Reade. “They’re waiting for this bombardment and they’ve got six days and it’s a ticking time bomb. When you’re waiting for something to come to the boil, you feel under attack from everywhere whether you’re in a confined space or out in the open.”

One of the biggest challenges adapting Sherriff’s play was in tweaking the language, which is as much a snapshot of West End theatre at the end of the 1920s as it is an authentic history of how they actually spoke during the First World War.

“One of the key things for me was to not be religiously slavish to Sherriff’s dialogue,” says Reade. “Without overly modernising it, I didn’t want it to sound old-fashioned and alienating: ‘Top hole!’ and ‘I say!’ could put off a younger audience, and I found it a little caricatured. What we could do that Sherriff couldn’t – because he had to consider the sensibilities of the era –  was to tease in the language that was used in the front line –the swearing and the sometimes aggressive, sometimes blunt speech authentic for that time.”

Although Saul Dibb had already directed a couple of period films (The Duchess and World War Two drama Suite Française) it was Bullet Boy and his recent adaptation of Zadie Smith’s NW, along with a background in documentary filmmaking, that proved to the producers he could bring an invigorating modernity to the screen. “We clicked on day one because his vision really did chime with ours,” says de Beaujeu.

“I felt it just had this incredible ring of truth to it,” explains Dibb of what attracted him to the material. “A really honest, really human account of what it was like to be there. Sherriff was a brilliant writer and he was writing from personal experience. We had the opportunity to make a very truthful account. The First World War was just a waste. It wiped out this whole generation, and for what? These people have been sacrificed. We just wanted to make it clear from the start that these are dead men walking. It’s not about slowly coming to understand it. All they come to understand, really, is what day it’s going to happen.”

Journey’s End will hope to entice not just cinephiles or those aware of the cultural significance of Sherriff’s play, but also a younger demographic even though it is being released at a time when superheroes, sequels and reboots hold sway.

“This is packed full of heroes and is an action movie, in embryo,” argues Reade. “It won’t be a disappointment from that point of view, in fact I think it will be a revelation because the audience will quickly see that our characters have more psychological depth than many blockbuster characters do.

“As a director, Saul is happy to share his early cuts. So we were able to invite audiences in from a range of backgrounds and young women responded incredibly well to the material even though they might not have necessarily have thought it was the sort of story they would have been drawn to.”

De Beaujeu agrees. “Sam and Asa are our conduit to younger audiences who will know and recognise them. Our real excitement about the promotion of the film is how we can market it particularly to younger women. I think it’s an audience that has been somewhat overlooked in the centenary and in much of the commemorations. Once they’ve been to see it, I hope they will be deeply and emotionally involved in the film. I can see social media being absolutely abuzz.”

Claflin, meanwhile, insists that Journey’s End is as relevant now as it has ever been.

“It’s a real insight into war,” he says. “War is still happening; people are still losing their lives. This is hopefully an opportunity to channel some of that frustration. Captain Stanhope is someone who’s in war and is highly affected by what he’s seen and what he’s been through. We know it as PTSD, and it’s something that so many people suffer from, and so many people are afraid to talk about. Hopefully it shines a light on that.”

As for Dibb, he has no trouble locating the position of Journey’s End within both the current cinematic landscape and among today’s headlines.

“Jourey’s End is much more like The Hurt Locker than a traditional blockbuster war movie, where we are talking abnout the authentic experience of war not glorifying it.”

He pauses and then suggests another reason that Journey’s End is essential viewing. “I was sent the script soon after the whole Brexit referendum, where it seems like people are naively tampering with alliances and allegiances that have been built up over decades to avoid precisely this kind of thing,” he finishes. “It felt like there’s a real relevance to it.”