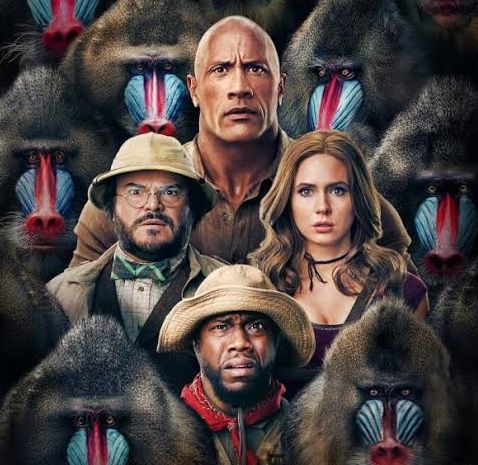 Following the global success of Jumanji: Welcome to the Jungle, the filmmakers knew they had an opportunity to continue telling the stories of these characters. Everything they know about Jumanji changes in Jumanji: The Next Level as they discover that there’s more to it than just a jungle; it’s bigger, more dangerous, and has more thrilling obstacles to overcome.

“The first movie was about what it means to understand who you are, and to throw your arms around everything you are capable of,” says producer Matt Tolmach, “The thing about life is that we change all the time. And so has the game. The game is upping the challenge, and the characters are changing.”

“The opportunity to come back to this idea, to these characters, both the kids in the real world and their avatars in the game, was irresistible to me,” says director Jake Kasdan. “But the great gift of this story is that we could bring everybody back, get the team back together, but also change what everyone was doing. And that makes it all new again. It allowed us to reapply the big idea, but in a really different way.”

The high school teens are now college students, trying to make their way in the world. They reunite over holiday break and have to navigate this new phase. “Relationships are now stronger than the last film. The characters now have history and success together,” says producer Hiram Garcia. “The previous movie delivered an imaginary world that was exciting, but along with that adventure, audiences found a lot of heart. Playing into the world of wish fulfillment, and how we ultimately have one life to live and we should live that life to the best of our ability, resonated cross culturally, and fortunately here we are now…making a sequel that we hope will be more spectacular in every way.”

“There was something really powerful to me about the idea of expanding the world to include characters at different phases in their lives. I love the kids and I love telling their stories, continuing their stories in this movie,” says Kasdan. “But the addition of Eddie and Milo felt like discovering a new room in your house. It was totally exciting to me. And Danny and Danny made it a dream come true.”

Tolmach, a longtime fan of the original Jumanji film, as well as Chris Van Allsburg’s children’s fantasy book that inspired the franchise, explains what drives the character development and storytelling, which connects with audiences in such a personal way: “A lot of us don’t even realize what we are capable of. The game gives you a glimpse at your powers that should be embraced. The thing about Jumanji is that the game understands you. The game knows your strengths and weaknesses, and it challenges you to be the best version of yourself.”

This time around, they knew they’d need to show more of the world of Jumanji. Just as the characters are out exploring the larger world outside the game, inside the game, we get to explore new locales, including arid sand dunes, treacherous canyons, and icy mountains—each with its own challenges for the gang to overcome, making for truly spectacular action sequences guaranteed to thrill audiences.

According to the film’s star and producer, Dwayne Johnson, they knew how high expectations were from the outset: “The scope and the scale of the film is really epic; when it’s Jumanji, it commands that. We went into this knowing that the pressure was on, and we’ve got to raise the bar. We’ve got to level up. So we brought in the best filmmakers, and the best in class with all our department heads and our crew. Also, what’s really cool about Jumanji is we have no constraints, because it’s a videogame.”

Nobody knows how to deliver a high score on this game better than director, co-writer, and producer, Jake Kasdan, who, “is the heart and soul of the Jumanji adventure and franchise,” according to Tolmach. “Jake was the one who challenged all of us to make a movie that lived up to what we had accomplished before, but to also go even further. Through storytelling, new characters, new animals, our avatars have to figure out how to navigate the game and life.”

Says Kasdan, “what would you learn about yourself if you could spend a day in someone else’s skin? That’s the big conceit of these movies obviously. But it’s an entirely different set of answers when you apply it to these new characters, who are looking back on the lives they’ve led. And it’s just as relevant, I think. Just because you’re older, doesn’t mean you stop discovering things about yourself.”

While the previous film allowed our characters to leave the world they knew behind and become someone else – an adventurer, a doctor, or a badass — this film has them coming to terms with who they are and how the game has changed them.

“This film is bringing things to the next level, to coin the phrase of our title, in a lot of ways. We go to the next level with our action sequences that are just really spectacular action sequences, our set pieces. What we’ve established is that there are multiple Jumanji universes, so we are going to the snow-capped mountains. We are in the desert dunes. We are back in the jungle. We are really all over the place in the best way,” enthuses actor/producer, Dwayne Johnson. “If you’re lucky enough to have a movie as successful as the first Jumanji, you’ve got to raise the bar. You’ve got to raise your game. You’ve got to level up. So, I think we did – and not only that, but we also introduced new characters in the movie which I think audiences will really respond to this time around.”

Jumanji is a film franchise like no other. You get to see huge stars come in and completely play against type in a persona you’ve never seen them portray before. That unpredictability allows for special moments you won’t find elsewhere.

“Before there was even a script, we were thinking, ‘What will be the places? What will be the animals, and how do we start to build those sequences very early?’ The ostriches and the dunes was one of our first ideas about action for this movie. That sequence was some of the first pages that we wrote, so we got a very early jump on starting to design and pre-vis those scenes as we started to figure out how that would work. We knew that that sequence would be best executed on a real location,” says Kasdan.

While the previous film took place primarily in the jungle, this time, co-writer/director, Jake Kasdan wanted to explore different areas of Jumanji, so he partnered with veteran production designer Bill Brzeski, whose work includes Aquaman, Iron Man 3, The Fate of the Furious, Furious 7, and The Hangover film series.

Jake Kasdan, the man at the helm of the global Jumanji franchise has movie magic in his DNA—literally. His father, Lawrence Kasdan, has written some of the biggest blockbuster films of all time, in addition to being a prolific director and producer. So it’s only fitting that Jake Kasdan would follow in his father’s footsteps.

“Jake Kasdan is the heart and soul of the Jumanji adventure. He is the director. He is one of the writers. He’s a producer. He is the North Star. And, there was no Jumanji without Jake,” says producer Matt Tolmach. “He was the one who challenged all of us not only to make a movie that lived up to what we had accomplished before, but also to go even further. There was that moment where we said, ‘How do we make this game more thrilling? How do we make the movie even funnier?’”

“One of the things that’s happening in the movie is the characters are not necessarily showing up in the same avatars as they were in the first movie.  And there’s just an inherent level of comedy in that. I was accustomed to being in this absurd body before, but it became the normal and now I’m in this body?  The idea of Jumanji is it places you in the game in an avatar in order to show you something about yourself, and that can be very entertaining,” concludes Tolmach.

Director, Co-Writer, and Producer Jake Kasdan made his feature film debut as writer and director of Zero Effect. The following year, he directed the pilot episode for the short-lived, highly acclaimed television series “Freaks and Geeks,” on which he also served as a producer. Since then, Kasdan has continued to straddle both mediums, working as a director, writer and producer.

Kasdan’s most recent feature film, Jumanji: Welcome to the Jungle, became a worldwide phenomenon, taking in over $962 million worldwide and becoming the most successful film domestically in the history of Columbia Pictures.

Originally from Baltimore, Co-Writer and Executive Producer Jeff Pinkner attended Northwestern University and Harvard Law School. He has co-written the screenplays for movies including The Amazing Spider-Man 2, The 5th Wave, The Dark Tower, Jumanji: Welcome to the Jungle, and Venom.

In television, Pinkner has been involved in several programs, among them he served as Showrunner on the ABC series “Alias” and the FOX series “Fringe,” was an executive producer on the ABC series “Lost”and co-created the CBS series, “Zoo.”He is currently the executive producer of “Limetown” starring Jessica Biel for Facebook Watch, “High Fidelity” for Hulu, starring Zoe Kravitz, and “Cowboy Bebop” starring John Cho, for Netflix.

Originally from Boston, Co-Writer and Executive Producer Scott Rosenberg has written the screenplays for movies including Things to Do in Denver When You’re Dead, Beautiful Girls, Con Air, Disturbing Behavior, and Gone in 60 Seconds. He co-wrote High Fideltiy, Jumanji: Welcome to the Jungle, and Venom.

In television, Rosenberg co-created the ABC series “October Road,” “Life on Mars,” and “Happy Town; and the CBS series’ “Zoo”. He iscurrently the executive producer of “Limetown” starring Jessica Biel for Facebook Watch; “High Fidelity” for Hulu, starring Zoe Kravitz, and “Cowboy Bebop” starring John Cho, for Netflix. Rosenberg is currently writing a movie for Sony, another for Disney, as well as an adaptation of the Andrew Smith novel, Grasshopper Jungle for New Regency.