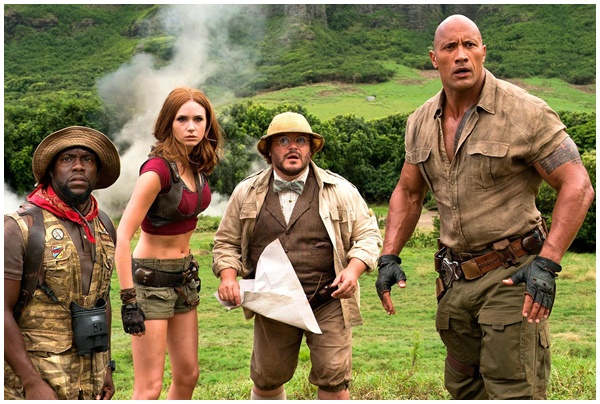 A comedy with plenty of kickass action

Chris Van Allsburg’s children’s book Jumanji tells the bewitching tale of a magical board game that implements real animals and other jungle elements as the game is played. 15 years after the book was published Robin Williams starred in the film adaptation and claimed “jumanji” is a Zulu word meaning “many effects”.

In 2005, a similar film marketed as a spiritual sequel to Jumanji, titled Zathura: A Space Adventure, was released and was also adapted from a Van Allsburg book which was more directly connected to the Jumanji book.

Now, in a stand-alone sequel, Jumanji: Welcome to the Jungle, the tables are turned  as four unlikely friends are sucked into the world of Jumanji.  When they discover an old video game console with a game they’ve never heard of, they decide to play and are immediately thrust into the game’s jungle setting, in the bodies of their avatars, played by Dwayne Johnson, Jack Black, Kevin Hart, and Karen Gillan.  What they discover is that you don’t just play Jumanji – Jumanji plays you.  They’ll have to go on the most dangerous adventure of their lives, or they’ll be stuck in Jumanji forever…

It is directed by Jake Kasdan from a screenplay by Chris McKenna & Erik Sommers and Scott Rosenberg & Jeff Pinkner.  The screen story is by Chris McKenna, based on the book Jumanji by Chris Van Allsburg

“The spirit of Jumanji flows through this continuation of the story,” says Dwayne Johnson. For the actor/executive producer and so many of his generation, the original Jumanji film captured a spirit of imagination that became the spine of the new film.  “We wanted to bring that spirit of wonderment, of overcoming fears and discovering who you are – it’s all woven through Jumanji: Welcome to the Jungle.  Every once in a while, a movie comes down the road that you just know in your gut, has a special quality to it.”

For Johnson, one of the keys to achieving that was to approach the new film as a continuation – another Jumanji adventure in the same universe as the first film.  “We all have tremendous love and reverence for the original movie – I’ve always been a huge fan of Robin Williams and his performance and that movie meant a lot to me and my family at that time,” he says.  “So, while the jungle came into our world in the original Jumanji, we go into Jumanji in this film.”

Producer Matt Tolmach is also a longtime fan of the original film and of Chris Van Allsburg’s children’s fantasy book that inspired the franchise.  Upon looking at the 1995 feature with fresh eyes, he says, “I immediately felt there were more Jumanji stories to be told.  My first thought was, ‘What’s the next chapter in that story? What’s the next Jumanji adventure?’ It was a natural step to continue what began over 20 years ago.”

Tolmach and writer Chris McKenna saw a new direction for Jumanji: they would turn the concept on its head.  Rather than bringing the jungle into our world, Jumanji: Welcome to the Jungle would bring the players into the jungle – and not just that.  “The game evolves, from a board game to a video game – the game will do what it has to do to be played,” Tolmach explains.  “And video games are a perfect fit for the world of Jumanji: you get to leave your world behind as you become someone else – an adventurer, a doctor, a hero.  This would be a great way to explore classic timeless themes – being yourself and embracing who you are while also challenging yourself to do things you never thought were possible.  They have to go and be somebody that seems completely different from who they think they are – except maybe they’re not so different after all.  It’s not a coincidence that you became this character who is seemingly so different than you are – you just need to go on this journey to figure out what you are capable of.  You always had it inside you.”

In the film, four teenagers – Spencer, Bethany, Fridge and Martha – who seemingly could not be more different are mysteriously pulled into the world of Jumanji.  Very quickly, they realize that they will need to figure out how to work together in order to survive.  In their new personas, they are each uniquely qualified to do specific tasks – but all of them (well, most of them) are also uniquely hindered by weaknesses that will slow their progress.

“Our lead characters are actually teenagers who are played by adult actors,” says Jake Kasdan.  Tolmach had previously worked with Kasdan on several films and thought he’d be the perfect choice to direct.  “This is a time of self-discovery for them, but it plays out in this fantastical context.  So, as they are figuring out who they are in real life, they suddenly find themselves occupying other people’s bodies in this game – people who, on the surface, are nothing like them. I thought that was a really funny idea, but also really interesting. What would you discover about yourself, if you could spend a day in somebody else’s body?”

An archeologist and international explorer, Dr. Smolder Bravestone is the consummate action hero: fearless, faster than a speeding bullet, able to climb anything, exceptional skill with weapons – and he does it all with his trademark “smoldering intensity.”  His weaknesses? None.  Who does that sound like?  None other than Dwayne Johnson, who plays the role.

Johnson relished the chance to play against type, a character completely unlike his persona as The Rock or any of the many action hero roles he has brought to life.  “Spencer is the most wonderful, insecure, lovable, allergic to everything, fun character I’ve ever played,” says Johnson.  “I’ve never had the opportunity to play a teenage boy.  He’s not a big physical guy, he’s just little Spencer who morphs into me.   I’m channeling this scared, little 16-year-old boy and it was a challenge.”

A challenge, because the whole movie hinges on audiences believing that Johnson is actually an anxious teenager.  But Johnson says that even though today he is a confident, grown man, that wasn’t always the case.  “Even when I was 16, I looked 46. I was six-foot-four and 245 pounds, and had a thick mustache – but whatever I looked like on the outside, on the inside I was still a teenager, trying to figure out who I was.  So, I held onto that spirit of being a teenager – I wanted to make sure that everyone watching this movie was thinking ‘That’s Spencer’ and not ‘That’s the Rock.’”

When Bethany (Madison Iseman), the school’s self-obsessed queen bee, is drawn into the game, she chooses to play a “curvy genius,” Dr. Shelly Oberon, who will help navigate Jumanji as an expert in cartography, archeology and paleontology.  Just one thing: Shelly is a nickname for Sheldon.  The image-conscious Bethany is suddenly, in her words, “an overweight middle-aged man” – that is, Jack Black.  (And Bethany is not surprised when Shelly’s weakness turns out to be endurance.)

For Black, the appeal of the role was twofold.  First, he would enjoy channeling his inner teenage girl – and to do it right, he made sure that he and the young woman with whom he shared the role were on the same page.  “In my mind, I know how to be a hot babe.  It’s in my toolbox,” says the comedian.  “But the teenage girl I know is circa 1980s, so before we started filming I asked Madison Iseman a ton of questions. I had to do my research.  ‘What are you listening to now? What’s your favorite music and what TV shows are you watching?’  I watched and listened and got into that headspace.  Madison was very helpful.”

Literally the big man on campus is the confident jock Fridge, played by Ser’darius Blain.  When he’s drawn into Jumanji, his status only grows – sort of.  He’s now Franklin “Moose” Finbar – an expert in zoology and a weapons valet… but a vertically challenged one – the size of Kevin Hart. And as if that’s not bad enough, his weaknesses add to his humiliation: strength, speed… and cake.

The outspoken but socially awkward Martha, portrayed by Morgan Turner knows that high school years can be bumpy – and life will get better in college and beyond – but that doesn’t make her daily existence any easier to bear. Until now, she’s coped by blending into the background… but as the powerhouse Ruby Roundhouse, the martial arts master and killer of men, Martha finds herself as a skilled badass who commands everyone’s attention.  It’s unfamiliar territory, to say the least, but she has no choice but to step up and fight for survival.

The Scottish actress Karen Gillan, known for her roles in the BBC series “Doctor Who” and her role of Nebula in the Guardians of the Galaxy franchise, embodies Martha’s warrior persona.   Jumanji becomes her proving ground to discover what she is really made of.

Alex, portrayed by Nick Jonas, is another player in the game who will either help them in their quest – or be a sign of the danger that awaits them.

“Alex’s avatar is a pilot – Jefferson ‘Seaplane’ McDonough,” says Jonas.  “He’s been in the game for a while and has had a bit of a tough time getting through it. As the movie goes on, we find out that the story’s a bit more complicated…”

The movie is a comedy with plenty of kickass action.

“I love movies like this – I’ve always wanted to make a big adventure movie,” says Kasdan.  “So, it’s a coming-of-age comedy that we shot on location in Hawaii with big action sequences and a lot of visual effects.”

“We wanted to build a classic action adventure movie with really high stakes,” says Tolmach.  “The stakes are very real; you can die in Jumanji.  We knew there would be tons of comedy in the movie, but we wanted it layered within action that was visceral and exciting.”