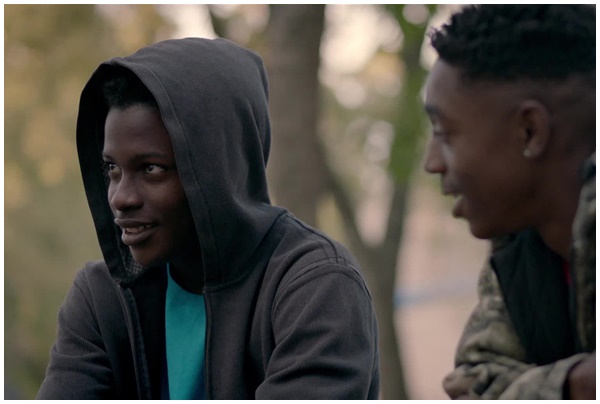 A story about ordinary people, played by nonprofessional actors, trying to survive within a world where some individuals do not have the same opportunities as the rest of the society

Antonio Méndez Esparza’s Life and Nothing More is a fictional narrative that looks intensely at the reality of a single mother who lives in North Florida with her three children, in a context of social inequality, with a haunted and unforgiving past, who tries and struggles to make ends meet, to resist the routine and the burden of the daily life.

One of the distinctive elements of Antonio’s narrative is his aptitude to tell stories of others from the point of view of the characters themselves without the distance and judgement of a stranger’s eye, being Antonio a Spanish director telling stories about immigrants or disadvantaged citizens in their own country. He manages to immerse himself and to blend into the environment, absorbing the feelings and perspectives of his characters as if he made them his own, and that is what we intend to do this time.

Antonio Méndez Esparza was born in Madrid, where he obtained a degree in Law, yet he has developed his entire professional career in the USA, first studying film at UCLA in Los Angeles and then finishing a MFA in Filmmaking at Columbia University, New York.

He spent a total of 12 years studying and working in the USA before returning to Spain in 2011.

In 2009 Esparza finished his latest short film, Una y Otra vez, which won numerous awards, amongst them the Best Spanish Short Film of the Year by the national Spanish state TV channel RTVE, the DGA Student Award for Best Latino Director from the East Coast and the Best Short Award at the LAFF (LA Film Festival), which brought him an Academy Award nomination. Both Una y Otra Vez and his previous short film, Yanira (2006), were broadcast nationally by RTVE, the main Spanish terrestrial channel. His first feature and latest work, A quí y Allá (2012), was the only Spanish project out of 13 scripts that were selected in June 2010 at the Sundance Lab Institute 3 and it was premiered at the Cannes Film Festival 2012 where it won the Critic’s Week Award.

Life and nothing more is his second feature film.

I am very interested in stories about the everyday that are also questioning my position to tell stories that are absolutely foreign to me. “Aqui y Allá” depicts an illegal immigrant, a husband and father, returning home from the US after a long period of time. He thus becomes a very unusual hero, one who perhaps may not “win” at the end, but whose intentions create a mirror for the audience while also portraying with a degree of realism small town life in Mexico.
In Life and Nothing More I aim to approach it with the same desire to understand and explore a reality of struggling dignity, and to offer a detailed account of a situation foreign to me. The film is the story of a mother and her family torn apart by circumstance, reunited, and yet separated again. If there is a moment of grace by the end, is in the uplift of the moment, and perhaps in the uncertainty of what is to be, and perhaps the characters may be better prepared to face their future.
I have often made films about people I’ve rarely met, but whom I admire. Is motherhood a picture in a catalog of “Macys”, “El corte ingles” or an add from Ikea. Or is the solitude of a woman observing their children play in a small playground, tasting a soda, smiling to the child, and when the child looks away, reflecting on all the things that brought her here. The fears and resignations that her child would endure. The limitations that they become.
The film deals with limitations. In the US, the American Dream is perhaps for the few, and there we live in a time of stagnation, and of overcoming need. In the last 30 years, rates for mobility have stagnated. People don’t move up and down their social status as often as they once did, and it is an impoverishment of the possibilities.
Buñuel, perhaps in his most corrosive and hopeless picture in Mexico “Los Olvidados” depicted those who are forgotten. This film will hope to portray inequality in the context of the US. To say they are forgotten is perhaps pretentious, as one may ask who is forgetting them. But if we accept that there is a struggling class in the US, this film aims to portray a family in this situation. Their hopes, their dreams, their anger, and more importantly their hope for a future.

The ambition of this film is to portray the reality it encounters. This is a film of normal people, the opposite to Hollywood. Normal and unique, faulty but with a moment of grace.  In order to accomplish this authenticity there are non-professional actors playing the characters.

A single mother struggles to maintain her household, while still eager for love. Her behavior pushes everyone away from her. Her oldest son, full of hatred towards her perceived indifference, tries to force his place around. Only the challenge and threat of justice, will bring them together, and will change their lives forever.

We have been working for the past 8 months casting on site, approaching women who may resemble the protagonist of the film. This meaning that we have been seeking this woman in Walmart, The Dollar Store, Gas Stations, and many others, having found a great candidate for the role. I have already started working with a single mother of 4 children whose life, or parts of it, will certainly be dramatized in a way so she will feel closer to the character.

We have been casting in some targeted schools and intend to continue doing so. We have so far seen around 250 kids, having casted in Nims, RAA and Fairview and we intend to extend our search. It has been a most illuminating experience – witnessing the life as well as the openness of both the children and the script and eventually, and more importantly, the film may tremendously benefit from that. The eldest son Andrew, has a parent in jail. He is well behaved, and composed though a bit naughty from time to time. He doesn’t want to end up there. He is afraid of that, and he will do anything to avoid it.

We want to start shooting during the Presidential elections in the state of Florida, specifically around the Tallahassee Area. That should be the background to part of the film. Regarding this relevant matter of the presidential elections, we pose some questions about it like: Will the character be involved in politics? Will there be discussions in school about politics? How can the election reflect in the story? It is very important that, although in the background, it is an opportunity for the film.

Tallahassee is where currently I live. This will be a film done over an extended period of time, and living here – for over 3 years now – has given me a perspective that before I never had. It is a small town, where the small town feeling has given in to corporate America. Where people perhaps matter less. Perhaps small town America, no longer exists or certainly not here.

Racial separation is still very much evident, represented in many different ways, in the script and in the world. Most students in State University are white. Neighborhoods, the poorest ones, mostly consist of African American population. Even schools are clearly racially divided, some with high percentages of one race versus another.
Incarceration rates affect the kids in a tremendous ways. In a particular school, a high percentage of kids have parents in prison, or had been. It is not a reality written, it is the reality I encountered and want to explore through the film.

The camera is the gaze of the audience. Is where they sit, or where you force them to seat. I intend the camera to observe, and sometimes to not let the audience breath. The film will work through accumulation of images, from the obsession of consumerism, to the soul dismay of the main protagonist in her inability to find a meaningful relationship with a man.

Shooting in super 16mm instead of digital is not a random decision whatsoever. There is something unique about the image capture on celluloid, which is organic, turning it into something real and tangible, and that’s something that can be noticed while watching the film. This becomes really important considering the commitment to reality that this project aims to have. Also, the limits and risks that it brings make everything be more concentrated, more focused on that specific reality we want to portrait.

During these months a screenplay has been developed that will be the blueprint for the film. It will be a guide to the film – but the film will only start happening once the cast is finished. The cast will heavily influence the film – as the stories and lives of the protagonists will dictate many details of the characters. Here is where the blurring line happens between the characters and the actors. That being said, it must be clear that the film is not a documentary. The characters are playing a version of themselves. Here, although we will extract from their lives, they will always be playing a part – though for them being safe to say – that the person in the screen is not them. This is a major advantage while playing and building a dramatic piece.