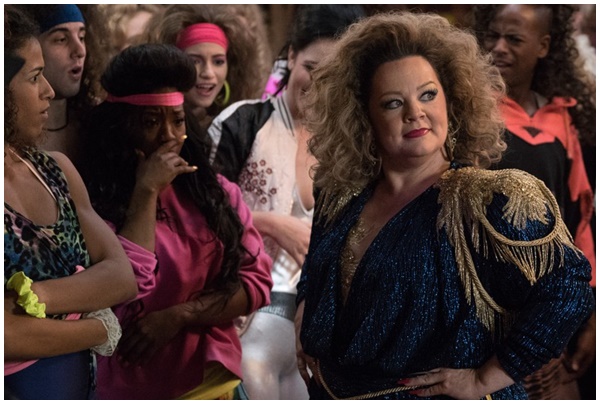 The powerhouse husband and wife team  Ben Falcone and Melissa McCarthy team up for the comedy Life of the Party, with Falcone directing from a screenplay by him and McCarthy and produced through their production company, On the Day.

When her husband suddenly dumps her, longtime dedicated housewife Deanna (McCarthy) turns regret into re-set by going back to college…landing in the same class and school as her daughter, who’s not entirely sold on the idea.  Plunging headlong into the campus experience, the increasingly outspoken Deanna—now Dee Rock—embraces freedom, fun and frat boys on her own terms, finding her true self in a senior year no one ever expected.

“Melissa and I love to write together.  I come up with the structure and she makes it funny,” Falcone deadpans.  In all seriousness, though, it was Falcone who suggested the idea after a visit from his mother-in-law.  “At one point when Melissa’s mom, Sandy, was over, I began to imagine what it would have been like for her if, when she was 40, she’d gone back to school with Melissa at 18.  I’ve always loved college-based movies, and combining that with the idea of restarting life because it’s never too late was intriguing.  I brought it up to Melissa and we were off and running.”

“Ben said to me, ‘I think you should go back to school…in a movie.’  And this story has so many other elements that interest me,” McCarthy offers.

“Like the idea that someone who is suddenly thrown a huge curveball in life can be so upset at first, but then with a little distance, a little perspective, realize what they’ve really been given is a second chance.  Or the fact that if you’re 50, you may live to be 100; you may not even be halfway done!  Life certainly isn’t over because you’re not 19 anymore, right?  We wanted to create a story that encourages people to believe it is okay to suddenly say, ‘I’m middle-aged and I’m moving to another country, I’m starting a vineyard or learning to bake bread.’  It’s never too late to redefine your life and to say, out loud, ‘What about me?’”

The powerhouse team was joined once again by producer Chris Henchy, who previously collaborated with McCarthy and Falcone on “The Boss” and “Tammy.”  He relates, “This is the third movie we’ve all been on together and so we have a good shorthand, a good working relationship, and know how to anticipate each other.”

McCarthy, especially, was eager to recreate the college experience for the film.  “I did not appreciate college when I was in it.  I think I wasn’t ready for it; it was too structured for me then.  After 12 years of Catholic school, I just wanted to be freer, maybe?” she grins.  “Really, I just wanted to go to New York City.  If I could just go to a history class or a math class now…that seems like a dream.  And the thought of doing that with my mom?  I think it would be a blast!”

While the busy actress may never have the opportunity, Falcone admires the character they created, who is at last putting herself first.  “Deanna takes that step many of us think about doing but never actually do it.  We get to see her fulfill a dream she’d given up on, which leads her on this really fun and, in some ways, totally unexpected adventure.”

In addition to highlighting some of the more spirited and stimulating ways in which Deanna finds her campus experience one not to be missed—such as fending off mean girls and rediscovering sex—Henchy says, “‘Life of the Party’ includes a great message that no matter where you are in life, you can hit the reset button, or pick up something that you haven’t done before but always wished you had.  Melissa’s Deanna is a perfect example of somebody who you normally would not see in a bursar’s office paying for two more semesters of class, but there she is.”

As parents of girls, McCarthy and Falcone were excited to make a film about the relationship between a mother and her daughter.  As it turned out, it was the perfect blend of experiences, and lack thereof.  McCarthy explains, “I have two daughters, and I wanted to show how good that relationship is, that you can roll your eyes at something your mom says but still get along.  And I didn’t finish college, but I always thought that was something I would go back to do.  In our story, we show both sides: a real girl freaking out that her mom’s moved onto her campus, and a grown woman surrounded by 21-year-old people and finding it intimidating but reinvigorating.  It really does make Deanna shake off the cobwebs, all that palpable youthful energy.”

To bring things even closer to home, and assist art in imitating life, the filmmakers not only based Deanna’s parents on McCarthy’s parents, they didn’t even bother changing their names to protect the innocent.  “My mom and dad in the film are actually not that loosely based on my mom and dad, Mike and Sandy,” McCarthy says.  “I called them and told them we had written a couple of parts that were somewhat like them, and she said, ‘What are their names?’  I said, ‘Mike and Sandy.’  To which she replied, ‘Oh, no!’  I told her not to worry, Sandy primarily just tries to force feed people sandwiches.”

Falcone attests, “Watching Sandy McCarthy make her husband a sandwich is a passion play in 17 acts, so I thought it might be kind of fun to put an element of that artform into a movie.”

In an even stranger turn, and in spite of having a character based on him played by a professional actor, Mike McCarthy had his own opportunity to appear in a cameo in the movie, alongside Falcone’s dad, Steve.  Recalling how he got the gig, the elder Falcone says, “Hard work, brains and bribery.  Also, yeah, I’m Ben’s dad.”

Falcone reflects, “This set was just a lot of fun.  It was a big cast and we had remarkable talent in every role, with everyone bringing a great attitude to the set as well.  For Melissa and me, from Maya to my dad, it was a family affair.”

“When did I stop being 25?” the ever-youthful McCarthy jokes.  “Doing what you love, you tend to lose track of the time.  But there are people who, at a certain age, are still trying to define who they are for the first time, and I love that.  I love stories of self-discovery, and if you can tell one and make people laugh with you along the way, that’s the best feeling.”

But how will she feel when it’s her own kids beginning that journey?  Falcone surmises, “We’re in a state of denial about our daughters ever leaving home.  I could see one of our daughters opening up her closet in her dorm room and Melissa just waiting in there, like, ‘Hi, honey!  Need anything?  A hug?’  It’s going to be dicey.”

MELISSA MCCARTHY (Deanna / Writer / Producer) received an Academy Award nomination for her role as Megan in the worldwide hit comedy “Bridesmaids,” and also received BAFTA, Critics’ Choice, and Screen Actors Guild (SAG) Award nominations for this role and won the MTV Movie Award for Comedic Performance of the Year.  McCarthy has received a star on the Hollywood Walk of Fame and has placed her hand and footprints in the cement in front of the TCL Chinese Theatre.  She was recently awarded the coveted Comedic Genius Award from MTV.

McCarthy recently starred in The Boss, which she also co-wrote with her actor/writer/director husband, Ben Falcone, and produced under their On The Day Productions banner.  In 2015, McCarthy starred in the hit film Spy for director Feig, for which she received a People’s Choice Award for Favorite Comedic Movie Actress, as well as a Golden Globe Award nomination and Critics’ Choice Award nomination.

McCarthy’s previous film credits include The Heat, Identity Thief, This is 40, The Hangover Part III, and in Ghostbusters.

She will next star in Can You Ever Forgive Me?,  The Kitchen and Super-Intelligence, alongside Falcone.

McCarthy’s additional feature film work includes The Back-Up Plan, Life as We Know It, Pretty Ugly People, Just Add Water, The Nines, White Oleander, Pumpkin, and Go, directed by Doug Liman.  Additionally, she starred in John August’s short film God, as a young woman having a gossipy phone conversation and short-lived spat with the Almighty, and also appeared in The Life of David Gale.

On television, McCarthy starred as the clumsy culinary genius Sookie St. James in Gilmore Girls, and as Dena in the series Samantha Who?

McCarthy won an Emmy Award and People’s Choice Award for starring as Molly on the hit CBS comedy Mike & Molly, and directed several episodes.  She has also received Emmy nominations for guest hosting Saturday Night Live, which she has hosted multiple times.  McCarthy recently returned to Stars Hollow for the Netflix reintroduction of Gilmore Girls.  Most recently, she appeared on the television series Nobodies, which she executive produces along with husband Ben Falcone, and which just began its second season.

A native of Illinois, McCarthy first made her mark on the comedy stage performing stand-up in New York at The Duplex, The Improv, and Stand-Up New York.  At the same time, she studied the Meisner Technique under Michael Harney and then continued her dramatic training at The Actors Studio.  McCarthy starred in a variety of stage productions throughout the city.  In Los Angeles, she spent nine years as a main-stage member of the world-renowned improv and sketch comedy troupe The Groundlings.

BEN FALCONE (Director / Writer / Producer) made his directorial debut in 2014 with the feature film Tammy, which he wrote and starred in alongside real-life wife Melissa McCarthy.  Falcone and McCarthy are set to begin production soon on Super-Intelligence, through their On the Day Productions banner.  The Boss was Falcone’s most recently released directorial effort, which he wrote and produced with McCarthy.

Falcone was last seen in the feature film Enough Said, and in Jason Bateman’s directorial debut, Bad Words.  Falcone also guest starred on FOX’s comedy hit New Girl and, most recently, the television series Nobodies, which he executive produces along with McCarthy.

His additional feature film credits include The Heat, Identity Thief, Spy and What to Expect When You’re Expecting.

Falcone’s comedy chops were revealed to the world in 2011 with the wildly successful film “Bridesmaids.”  A working actor and Groundlings alum, his hilarious portrayal of Air Marshall Jon brought him from comedy community favorite to recognizable heavy hitter.