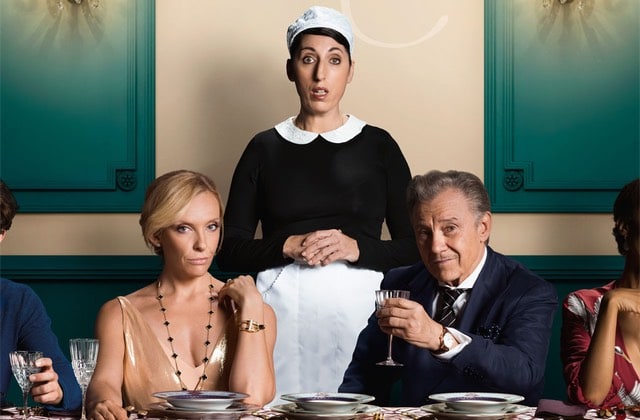 Any woman can be a Madame

When asked about the origins of the story for Madame, French writer-director Amanda Sthers takes a moment to think:  “l always take a bit of time to know where things come from: I worked out where Madame came from during a session with my analyst. In life, you sometimes feel like you’re not in the right place, that you don’t totally belong to the world in which you are living. In other words, you feel like a fraud. I felt this very strongly when I was a child. My father, who was a very philanthropic doctor, had just remarried to a woman who was richer than him. Suddenly, I went from spending my vacations in the countryside with my grandparents to Saint-Tropez, in the midst of some rather different social codes. My whole life was dedicated to reading, with the aim of bettering myself and being more intelligent. And suddenly, I found myself in a world of vacuity, dominated by money. During dinner parties, I felt like I was the maid. So it’s possible that the character of Maria, played by Rossy de Palma, is a version of my adolescence!”

In Madame, Anne (Toni Collette) and Bob (Harvey Keitel)l a wealthy and well-connected American couplet  want to add a little spice to a waning marriage, and move into a manor house in romantic Paris. While preparing a particularly luxurious dinner for sophisticated international friends, our hostess discovers there are 13 guests. Panic-stricken, Anne insists her loyal maid Maria (Rossy de Palma) disguise herself as a mysterious Spanish noblewoman to even out the numbers. But a little too much wine and some playful chat lead Maria to accidentally endear herself to a dandy British art broker (Michael Smiley). Their budding romance will have Anne chasing her maid around Paris and finally plotting to destroy this most unexpected and joyous love affair.

What makes a creator decide that their next work will be a film rather than a play or a novel?

For Amanda Sthers, “A good story is a good story. But sometimes, novels deal with abstract ideas. Some of the ones I have written could not be adapted on screen. Madame could be a novel or a film, but above all, it could be a drama or a comedy. When I pitch the film, I try to remain between the two, because life is not just black or white: Tears can well up in the middle of laughter, or the opposite. That’s what I like about Italian cinema.”

Amanda Sthers is a famous French writer. She wrote nine successful novels translated in 14 languages, and has been awarded the Chevalier des Arts et des Lettres medal by the French Government.

In 2013, she also wrote the first authorized biography of France’s biggest star Johnny Hallyday which has sold over 700 000 copies.

As a playwright, Amanda has worked on musicals for kids and on five plays that have been staged all over France and Europe, including during the prestigious Avignon Festival for Le Lien.

She is currently working on Les Terres Saintes (Holy Lands), which will be an adaptation of her own novel.

Madame could be a modern version of Cinderella, and Amanda Sthers wanted her story to resonate with the world of today.

“The story could have taken place in any period, and it will still be relevant a century from now. The fact that it is relevant is because capitalism is increasingly showing itself to be a lie or a trap. Everyone hopes they can escape their situation, and society lets you believe it’s possible, but that is less and less the case. The film mocks fairytales, which are today’s romantic comedies, like those films with Hugh Grant, which some of the characters in Madame discuss. Sure, all the archetypes, all the codes of fairytales are there, but my film is more realistic. Because those tales are a sort of opium, and what happens never occurs in real life. And yet that’s not negative: One can take something from a dream that collapses, one can find liberty and dignity in there. Maria ends up escaping her destiny. It might not be for a dazzling future, for love or money, but she finds something even better: The capacity to live on her own terms, and to look at herself in the mirror in a fresh light.” Rossy de Palma agrees: “It’s a comedy, but there’s something bitter-sweet underneath. Behind the fable, there’s a criticism of social classes, how the rich behave with those who are less well-off. There’s a kind of violence – although audience will mainly laugh, and be moved, I hope.”

Are Bob and Anne, the characters who force their maid into a different role, guilty for embarking on this deception?

“Yes, I think Anne is ashamed,” says Toni Colette. “She’s a very complicated woman, who has a kind of despair. She’s trying to manipulate everyone to prove that she has the power, that she’s in control. One of the film’s themes is the ability to be satisfied with your life, especially if you’re privileged. Clearly, Anne cannot achieve this.”

Amanda Sthers adds: “Anne and Bob are primarily prisoners of their social status, of their environment. We are all prisoners of who we are, and trying to escape it is one of the hardest things there is. And sometimes, even if you manage to, it doesn’t make you happy… ”

The film’s social subtext is not lost on Michael Smiley who, like the other actors, was delighted to shoot for several weeks in Paris: “This beautiful city, where the food is incredible, and even the doorways are magnificent! It’s so sad to see the homeless and migrants sleeping in the street. I find that especially moving, since I spent a year living that way with a child, when I arrived in London in the early 1980s. That is clearly the other side of the film… ”

“Madame is neither a French film, nor an American one,” explains Amanda Sthers, who readily admits her debt to Woody Allen’s filmmaking.

“It’s a film of today’s ‘global’ world. When I was younger, whenever anyone went to the United States, you’d ask them: Can you bring me back this or that? Nowadays, you can find everything, everywhere, in a click. Almost everyone speaks English, sometimes it’s hard to know what nationality people are. But France still has two things: The art of love, and a love of art. Our protagonists came to France because they think of Paris as a museum of love, where their marriage will be revitalized. What will happen to Maria after the end of the film? If people ask the question, then the film works. It’s a question I used to ask my father often when he took me to the movies as a child: What happens after? I’ve got my own answer, but each spectator has to find the one that suits them.”

Madame tells the story of a society Madame who turns ordinary Maria into a Madame herself. So who does the title refer to?

“Both of them. It’s very strange how, when a boss addresses a household employee, he calls her by her first name, and she replies with the title Monsieur or Madame, and you can see the social difference in a single detail. But when that employee, outside of the workplace, is noticed, as soon as someone falls in love with her, she becomes Madame in turn. Depending on the context, any woman can be a Madame.”