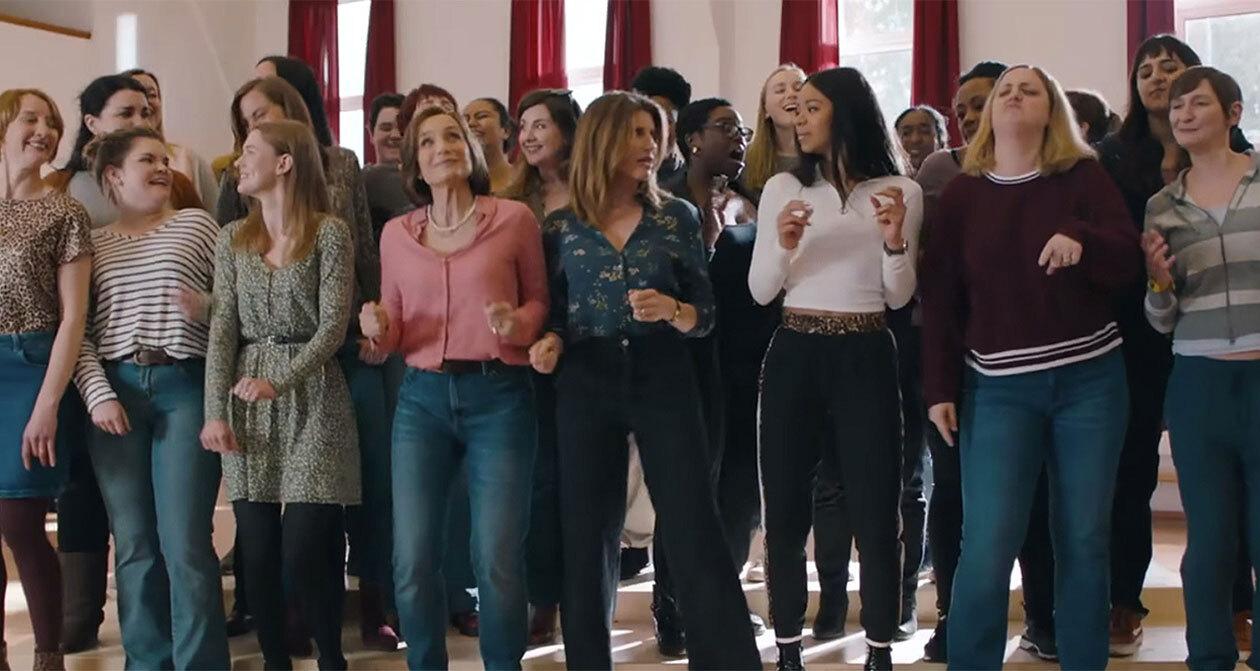 Director Peter Cattaneo was inspired by the concept of Military Wives, which allowed him to explore a way of life that has rarely been seen on the big screen, as well as make a film with music and singing at its core.

“I didn’t know anything about military wives; I didn’t know anything about choirs, ” says Cattaneo. “You see hundreds of war films, but you’ve never seen what happens to the families left behind. As a family person myself, it felt like interesting territory, and then when I knew it was a true story and it had choirs in it, I thought, Well, if you put music and singing in the middle of all that, that just sounds like potential to be a great movie.”

Directed by Cattaneo (The Full Monty) from a screenplay crafted by BIFA award-winner Rachel Tunnard (Adult Life Skills) and award-winning writer Rosanne Flynn (Crossbones, Meconium), Military Wives is a feel good crowd-pleaser inspired by true events, telling of a group of women who come together as their partners serve in Afghanistan.

Together they form the very first military wives choir, helping each other through some of life’s most difficult moments and also becoming a media sensation and global movement in the process.

“As I started meeting real military wives, rich themes soon showed themselves: a fragmented group of people finding unity and camaraderie through song; women who are expected to “keep quiet and carry on” finding their voices,” says Cattaneo. “We got to know some very courageous and candid military wives and the personal stories they shared were humbling, sometimes harrowing, often hilarious. I was struck by their honest, down to earth sense of humour and I was determined to fill the film with this kind of comedy. “

The film was shot at RMB Catterick, which was where the first military wives choir was formed. The base supplied specific uniforms, vehicles, locations and advice. We used serving soldiers and their families as extras and the location for Kate’s house was the actual setting for the first ever military wives choir meeting in 2010.

Cattaneo went through hundreds of songs in the effort to choose the best tracks for the choir. He wanted songs that thematically resonate with the story without being too on the nose.

“It was fascinating to discover which songs and genres translated best to a choral arrangement; we explored rock and more contemporary pop music but kept coming back to 80s electro pop classics – this is the music of our character’s youth and makes a humorous juxtaposition with the austerity of military life.”

“I hope audiences will come away from watching Military Wives having laughed and cried with the characters, feeling inspired by the courage of the women and uplifted by hearing them belt out some classic songs.”

For Horgan, in researching the life of a military wife, it helped to see the real-life women as approachable. “They’re just all regular people,” she said. “They’re absolutely the same as you and me, and it’s such a massive thing to wrap your head around.”

Jason Flemyng plays an officer overseeing life on the base. For him, getting into the part meant acknowledging the pressure the wives are under when their partners go to war. “It’s so unique, that idea of saying goodbye to someone,” he said. “You know, when people go to work, obviously they could have a car crash or something terrible could happen. But for those people to actually say goodbye to your husband or wife who’s going way, you know there’s a chance you’re never going to see them again. It’s so poignant, and for anyone who’s watching the film, you feel that feeling for them, and you imagine it in your situation.”

Families of service personnel move around frequently and it can often be tough to put down roots or make new friends which can leave women feeling isolated, particularly when loved ones are away for long periods of time.

Research shows that singing in a choir helps to alleviate stress and contributes to an improvement in isolation, anxiety and depression.

The Military Wives Choirs network therefore has a vital role to play by bringing women in the military community together through singing.

There are over 2,300 women with a military connection in 75 choirs across the UK and overseas.

Every new posting for women in the military community is as daunting as it is exciting but knowing that you have a choir to go to in your new location where you know the songs and even some of the people can be a real lifeline. That’s why, whilst each local choir has its own identity, all are run in a very similar way with shared music, a fun and friendly ethos and lots of ‘cross-network’ projects and activities.