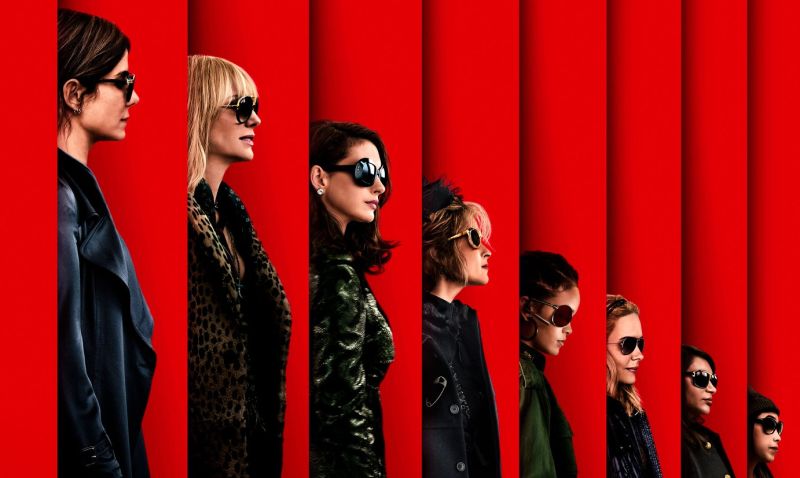 “It’s an amalgam of things.  It’s funny, but not a straight comedy; it’s a heist film, but not a drama.  It’s playful, it’s joyful, but most of all, I think it’s cool.  And I think the audience will have a great time.”

It’s been more than 10 years since an Ocean-led crew has conned their way to millions of dollars.  Now a new gang is banding together to carry out the ultimate heist.  But this time, it’s Debbie Ocean masterminding the plan, and she’ll only require eight supremely skilled women to pull it off.

Director/screenwriter Gary Ross says, “The outlaw trope has always been at the heart of American movies, but with few exceptions, those ‘outlaws’ have been men.  I was intrigued with the idea of a group of kickass women laying claim to this genre that had always seemed off limits.  Plus, I love heist movies—always have.”

Gary Ross (Director / Writer), a four-time Academy Award-nominated writer, director and producer, creates original stories that explore humanity through equal parts drama and humor.  From his original screenplays for Big and Dave, and his adaptations and direction of Seabiscuit and The Hunger Games, to his original screenplays and direction of Pleasantville and Ocean’s 8, Ross’s work as a filmmaker has been distinguished by a fascination with that which influences the best and worst in human behavior.

Ross’s first book, Bartholomew Biddle and the Very Big Wind, was published in fall 2013 by Candlewick Press.  A children’s fantasy, the illustrated book is written completely in verse.

Ross is active in civic and charitable work.  During his tenure as President of the Los Angeles Library, he established mentoring programs for inner city youth and expanded teenage and youth-at-risk services throughout the Los Angeles library system.  He has served on numerous boards and charitable organizations, including his current service on the L.A. River Revitalization Corps, which is working with Architect Frank Gehry to transform the LA River into one of the largest urban parks in the nation.

Sandra Bullock offers, “This is a heist movie, and heist movies are always fun.  How will they get away with whatever they are stealing and what antics will happen along the way?  But what this movie is really about is these eight wonderfully complex, smart, funny women, who are going to take you on their own journey, and all the twists and turns that arise.”

Bullock stars as Debbie Ocean, who has spent a little over five years devising an intricate plot to steal the Toussaint, Cartier’s one-of-a-kind diamond necklace, valued at 150 million dollars.  And she plans to do it in the midst of one of the most-watched events of the year: The Met Gala.

Ross had originally conceived the idea for a new entry in the “Ocean’s” franchise five years ago and brought it to the director of the “Ocean’s” trilogy, Steven Soderbergh.

“Steven is a close friend and we’ve ‘unofficially’ collaborated on a number of projects over the years,” notes Ross.  “If he hadn’t been involved, I don’t think I would have done it.  It was great working together.”

Soderbergh says that he was excited about the concept, as well as Ross’s casting choice for the lead.  “Gary came to me and said, ‘What about Sandy as Danny’s sister?’  I thought that was really interesting, so I said, ‘Let’s take it to Jerry [Weintraub].’  And Jerry thought it was a terrific idea.”

In fact, it was Weintraub who first reached out to Bullock.  “There wasn’t even a script yet, but Jerry’s energy, his joy and his passion for this franchise were very infectious,” the actress recalls.

Though he had not written with a collaborator since his first screenplay, “Big,” Ross knew this was different.  He reached out to co-screenwriter, Olivia Milch, to pen the script with him.  “It ended up being a great partnership,” he remarks.

Olivia Milch (Screenwriter/Co-Producer) is making a splash in 2018 with her first two feature films.  She made her debut as a writer/director with the indie film Dude, now on Netflix, and Ocean’s 8 marks her first major feature film credit.

Milch was at Yale studying Faulkner when she met an executor of the writer’s estate, an encounter during which her obvious affection for the Nobel laureate’s work—matched with her budding screenwriting talent—led to the acquisition of film and television rights to Faulkner’s canon.  A first-look deal at HBO followed, and soon after, when she began expanding the subject matter of her scripts, Milch found herself featured on the 2013 Black List.

Her first feature, “Dude,” which she directed from her own screenplay, sprung out of Milch’s desire to see more realistic portrayals of female friendship onscreen.  Shot in 18 days on a shoestring budget, the film follows four best friends as they navigate loss and major life changes—and smoke a lot of weed—during their last two weeks of high school.  For “Dude,” Milch assembled not only a cast of powerful women but also a largely female creative team.

Featured on Variety’s 10 “Screenwriters to Watch” and Indiewire’s “On the Rise” lists, and with numerous projects in development for both film and television, Milch is emerging as one of the most in-demand voices in Hollywood today.

“Gary understood how necessary it was to have a female voice involved in this process,” says Milch, “and I was thrilled to be a part of it.  Also, the breezy coolness of these characters—that back and forth patter—we kind of found that same thing side by side at the keyboard.”

Soderbergh comments, “I think Gary and Olivia found that balance of having the film share the DNA of the ‘Ocean’s’ franchise, and yet, at the same time, be its own unique thing.”

Sadly, legendary producer Jerry Weintraub passed away before he could see the movie come to fruition.  “It was difficult to imagine an ‘Ocean’s’ film without Jerry at the helm as a producer,” Soderbergh states.  “Jerry wasn’t just a producer; he was a larger-than-life figure.”

Weintraub’s longtime collaborator Susan Ekins, who had served as an executive producer on the previous “Ocean’s” films, came on board as a producer.  Soderbergh shares, “Gary and I went to her and said, ‘You were part of the brain trust of the first three, so we would love for you to take a more central role here.’”

Ekins was happy to return to the franchise that has been an important part of her life and career, spanning almost two decades.  “From ‘Ocean’s Eleven,’ in 2001, through ‘Ocean’s Twelve’ and ‘Ocean’s Thirteen,’ I had the pleasure of working with Jerry Weintraub and Steven Soderbergh, both brilliant filmmakers.  And now I get to continue that legacy with Steven and Gary.  I think what makes these films appealing to such a wide audience is the notion of getting away with something and having fun doing it.”

In the tradition of the “Ocean’s” films, each member of the team brings her own specialty to the table.  Joining Bullock as the title eight are Cate Blanchett, Anne Hathaway, Mindy Kaling, Sarah Paulson, Awkwafina, Rihanna and Helena Bonham Carter.

Ross offers, “I wasn’t just casting individual roles; I was putting together a band who all had to sound great together.  It was exciting from the beginning.”

The opportunity to work with one another became a major draw for the actresses.  Blanchett confirms, “When Gary and Steven started talking about the cast they were assembling, that was the absolute ‘why’ for me.  It really is an amazing bunch of women, and it was just great to play with them.”

Hathaway says, “Making a movie is a certain kind of shared experience, but when it’s you plus seven other women, there is so much more common ground to start with.  That created an effortlessness in working together that made it so much fun.”

“That spirit of collaboration extended throughout the entire production,” says Ross.  “On set, there was this alchemy taking place between these eight tremendously creative women.  Sometimes I would just take a step back and watch it all happen.”

“Some writers don’t like you to improv, but Gary welcomed our input,” Hathaway attests.  “As a director, he wanted to make everyone feel like they were giving their best performance.  I think he did a great job.”

“Gary brought a writer’s sensibility to the whole process,” Blanchett adds.  “He was constantly shifting things up, which lent a lot of buoyancy on set.  One thing this film has in common with the others is that there’s always a twist inside the twist inside the twist.  But he used that in a very witty way, so it subverts expectations.”

Changing things up in a different way, “Ocean’s 8” takes the action out of the Las Vegas casinos, moving it to New York and into the city’s most coveted event, the Costume Institute Benefit at The Metropolitan Museum of Art, also known as The Met Gala.  The filmmakers had unprecedented access to The Met, filming there for 10 days—longer than any other production.  Ross says, “If we hadn’t shot at The Met, I think it would have been almost impossible to do this.  But the fact that we were able to get in there was a huge advantage.”

Cartier was also an invaluable partner—creating a specifically modified version of the stunning Toussaint necklace, which plays an important role in the film as the objective of the entire scheme.  “The Toussaint is one of the largest necklaces in their collection, sitting in their vault,” says executive producer Diana Alvarez.  “It was really important that it feel real…be real.  The people at Cartier were incredible consultants and their expertise was a huge help to us.  And they allowed us to shoot at the Cartier Mansion.  To be able to go into their world and put it on screen was a big deal.”

“Ocean’s 8” was filmed entirely on location in New York, and, Soderbergh says, “Gary did a terrific job capturing the life of the city.  I can’t imagine a better place to set the film; if you could pick any city in the world to do the fourth ‘Ocean’s’ film, I think this was the perfect call.  And add in seeing these eight remarkable women, all in the same frame at the same time…  Right out of the gate, it’s exciting.”

Ross reflects, “It’s an amalgam of things.  It’s funny, but not a straight comedy; it’s a heist film, but not a drama.  It’s playful, it’s joyful, but most of all, I think it’s cool.  And I think the audience will have a great time.”