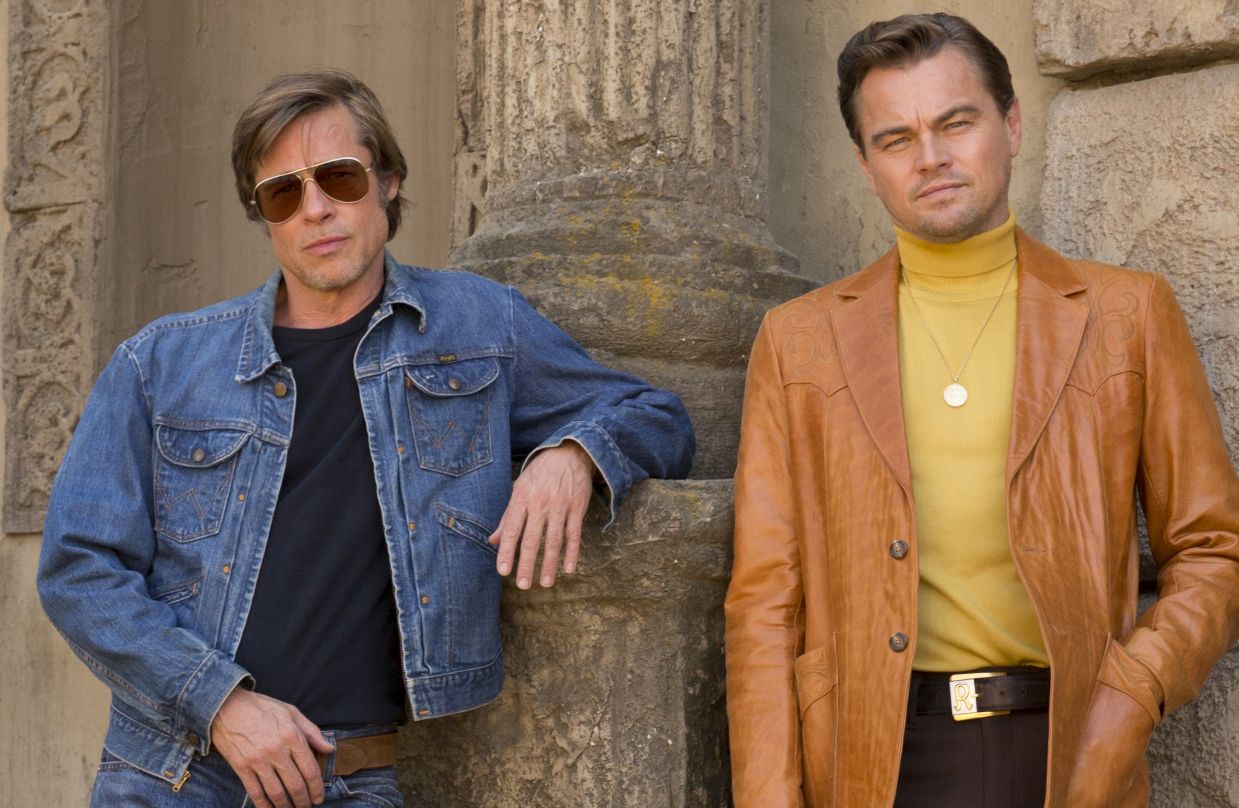 With Once Upon a Time… in Hollywood, Revisionist-filmmaker Quentin Tarantino continues to evolve and to surprise audiences.

While Quentin Tarantino’s early career primarily centered on contemporary crime movies, his more recent work has been much more about rewriting history. It began when he brought the Nazis down in his own way with 2009’s Inglourious Basterds, and since then has also explored slavery in the Deep South with Django Unchained, and the period following the Civil War in The Hateful Eight. His most recent work, Once Upon A Time In Hollywood, is yet another example of Tarantino’s revisionist-trend, as the film’s ending proposes the existence of another universe.

While it has all of the hallmarks of a Tarantino film – a wholly original story, with fresh characters, presented with bravura technique – his ninth film also breaks new ground for the writer-director.

It is a character-driven story, dealing with mature issues of unfulfilled expectations that inevitably confront us all as we age.

In Hollywood, this struggle is particularly dramatic, as success and failure live side by side. In Once Upon a Time…, they do so literally as well as figuratively.

Set in 1969, Tarantino recreates the time and place of his formative years, when everything – the United States, the city of Los Angeles, the Hollywood star system, even the movies themselves – was at an inflection point, and no one knew where the pieces would land. All this is not entirely dissimilar from the changes buffeting Hollywood today.

At the center is Rick Dalton, played by Leonardo DiCaprio. Rick had been the star of “Bounty Law,” a hit television series in the 50s and early 60s, but his prophesied transition to motion picture stardom never materialized. Now, as Hollywood moves towards a hippie aesthetic, Rick worries that his time has passed – and wonders if there’s still a chance for him. “Rick Dalton is a byproduct of the 50s – the 1950s pompadour hero – but now there’s a new era and this train has passed him by,” says DiCaprio. “Working with Quentin, we saw Rick Dalton’s story as a journey of an immense lack of confidence – his inability to be thankful for the position that he’s in and what he’s already gotten. He’s constantly yearning for something more.”

At Rick’s side is Cliff Booth, a former war hero, now Rick’s stunt double, played by Brad Pitt. As their careers have evolved and their struggles increased, the one constant for them has been each other. Cliff has proven his loyalty to Rick over and over again, and vice versa – they are the only true family that either has. “Our characters are based on an actor-stuntman relationship – spending entire careers together was much more prevalent at that time,” says Pitt. “We talked about Steve McQueen and Bud Ekins, who were a strong team with The Great Escape, and we talked about Burt Reynolds and Hal Needham. In fact, we got to talk to Burt about that, which was a real joy. There was just a tighter bond between the two – where we’re more transitory in that way today. Cliff and Rick really rely on each other. The down time is more grueling than the actual work at times, so to have a friend, to have a partner, was all-important. It’s even all-important now.”

Surrounding DiCaprio and Pitt on Rick and Cliff’s journey are a mix of real and fictional characters played by a who’s who of today’s most acclaimed actors: Al Pacino as Marvin Schwarzs, an emeritus agent selling the virtues of Italian westerns, Kurt Russell as Randy, a stunt coordinator, Dakota Fanning as the Manson family member Squeaky, and Margot Robbie as Sharon Tate, the idealized ingenue who just happens to be Rick’s neighbor. She is married to Roman Polanski, whose film Rosemary’s Baby has made him the hottest director in town; they’re on every party list, living the high life.

Robbie says: “Rick Dalton lives next door to Roman and Sharon, and we’re just out of reach. All the things he thinks he wants – the real inner circle of Hollywood, all the glamor that comes with it – is so close and yet so far.”

For Tarantino, this set of characters was not only fascinating in their own right, but equally interesting because they represent three class levels of Hollywood.

“In this town, these people can all exist right next to each other,” says Tarantino.

The milieu also has personal resonance for Tarantino. “This movie is in part a memory piece,” he says. “I lived in Los Angeles County – Alhambra – in 1969. I remember what was at the movies, what was on TV, network and local; I remember the kid host at the time, I remember Seymour was the horror movie host at the time. I remember KHJ radio playing all the time – I remember how people listened to radio in their car: you didn’t move it around, looking for this song versus that song; you had one station that you listened to, you played the radio at full blast, and you didn’t turn it down when the commercials came on, you just talked over the radio. Part of the fun of it was wracking my brain, triggering my memory, and remembering what it was like.”

“This is a unique film in Quentin’s body of work, and it is his most emotional,” says producer David Heyman. “In a way, he’s looking back on his influences and the movies he loved, the period he was growing up in, and what helped shape him – a love letter to a bygone Hollywood. But I found the script so moving. Yes, it was funny. Yes, it was thrilling. Still, at its heart, it’s a really tender story about a friendship.”

“Part of what makes the film so special is to watch Leo and Brad work off of each other,” adds producer Shannon McIntosh, who has worked with Tarantino in several capacities for decades.

“They’re both fully inhabiting these characters, bringing them to life in a way that leaves you feeling like they are family. For those of us who love making movies, it hits close to home, because ultimately that’s what we love about it: working with these people and forging these lifelong bonds.”

Films about such bonds, and the opportunity for “Butch and Sundance type” casting they afford, are rare in the modern system, so both parts needed to be strong. “I tried a couple of different stories, and then I decided no, I don’t want to put them through some typical melodramatic plot line,” says Tarantino. “I want it to be three rich days in the lives
of these characters as they move about Los Angeles, and the conflict of the story builds each day until it reaches a tipping point.”

Because the film builds to a startling climax, the filmmakers are respectfully asking the media who see the film to please avoid revealing specific details, in particular story resolutions, that might spoil the viewing experience for audiences when the film comes out in July. Protecting an unspoiled experience for the public makes it possible for filmmakers to continue to support early festivals.

With his vibrant imagination and dedication to richly layered storytelling QUENTIN TARANTINO (Writer/Director/Producer) has established himself as one of the most celebrated filmmakers of his generation.

Tarantino’s The Hateful Eight received many awards, including Ennio Morricone’s only Oscar® along with Golden Globes, BAFTA and ASCAP wins for the composer; while Tarantino was nominated by BAFTA and the Golden Globes for his screenplay, Jennifer Jason Leigh by the Academy and BAFTA for supporting actress and Robert Richardson by the Academy for his Ultra Panavision 70MM cinematography. Starring Samuel L. Jackson, Kurt Russell, Jennifer Jason Leigh, Walton Goggins, Damián Bechir, Tim Roth, Bruce Dern and Michael Madsen, the film is set in Wyoming in the 1870s as a blizzard overtakes eight travelers in a stagecoach lodge who come to realize that they might not make it to their destination after all. The film debuted worldwide in approximately 100 theaters retrofitted with 70MM anamorphic film projectors screening exclusive 182-minute roadshow prints complete with an overture, intermission and printed programs. Most recently a special four-chapter extended version curated by Tarantino became available on Netflix.

Following the success of Reservoir Dogs, the screenplays that Tarantino wrote during his tenure as a video store clerk became hot properties: Tony Scott directed Christian Slater and Patricia Arquette in True Romance and Robert Rodriguez directed George Clooney and Salma Hayek in From Dusk Till Dawn. In addition to their collaborations From Dusk Till Dawn and Grindhouse, Tarantino also joined Rodriguez as a special guest director on his hit Sin City. Tarantino joined Rodriguez, Allison Anders and Alexandre Rockwell by directing, writing and executive producing a segment of the omnibus feature Four Rooms. For television, Tarantino directed the season five finale of “CSI.” The episode, titled “Grave Danger,” garnered Tarantino an Emmy nomination for Outstanding Directing for a Drama Series. Tarantino made his television directorial debut in 1995 with an episode of the long-running drama “ER.”

Tarantino’s diverse work as a producer exemplifies both his commitment to first-time filmmakers and his support for his experienced peers and colleagues. Tarantino served as an executive producer on Eli Roth’s Hostel and Hostel: Part II, Roger Avary’s Killing Zoe, Katrina Bronson’s Daltry Calhoun and Robert Rodriguez’s From Dusk Till Dawn. The longtime fan of Asian cinema presented Yuen Wo Ping’s Iron Monkey to American audiences in 2001, Zhang Yimou’s Hero in 2004 and RZA’s The Man with the Iron Fists in 2012.