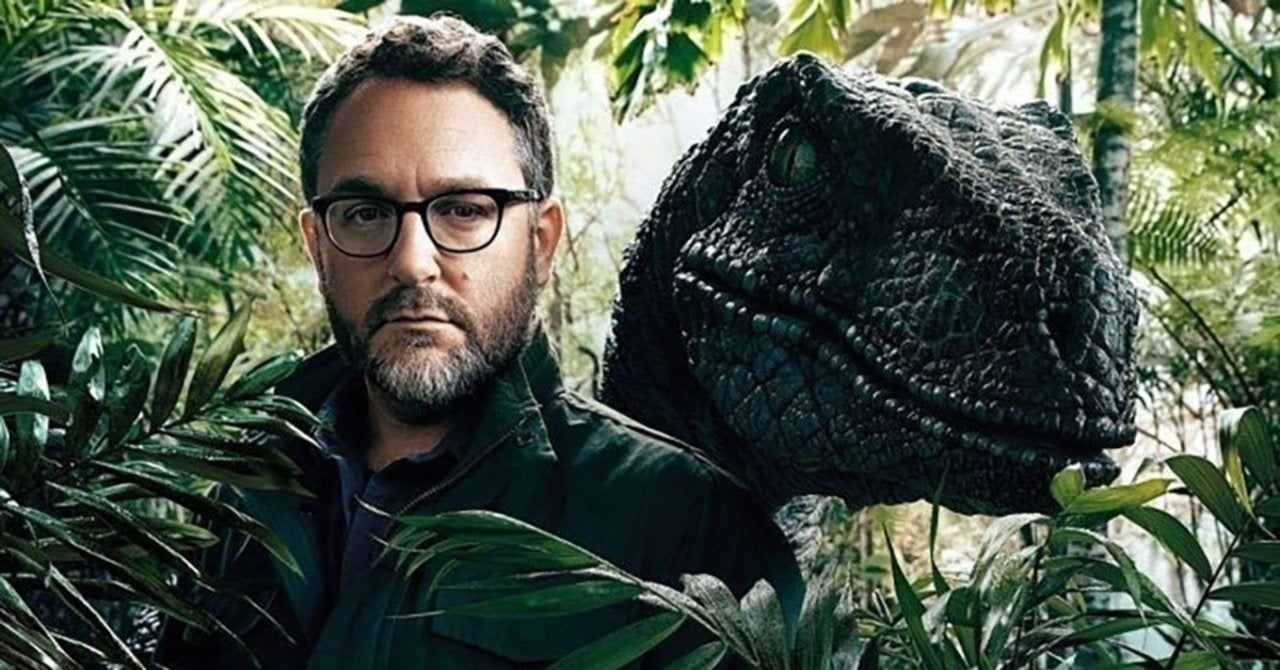 For almost three decades, the Jurassic Park and Jurassic World films, based on characters created by author Michael Crichton, have inspired awe and wonder and terror and exhilaration and unfettered joy in almost every living person who has crossed the threshold of a movie theatre in the past 29 years. Under the guidance of filmmaker Colin Trevorrow, who reignited the franchise with Jurassic World in 2015 and has been the series’ creative architect ever since, and long-time franchise producers Frank Marshall and Patrick Crowley, the films have become woven into the cultural DNA of almost every country on Earth.

“With these films, I’m sharing the next few chapters of a story we’ve been telling around the campfire for thirty years,” Colin Trevorrow says. “This is a world that Steven Spielberg and Michael Crichton created together, and I have been fortunate enough to be a custodian of it for three films—in collaboration with Jurassic World: Fallen Kingdom director J.A. Bayona, the writers and everyone who’s worked to make this what it is. I’m so grateful to Steven for allowing a new generation to continue telling the story that he and his collaborators began.”

Go behind the scenes of Jurassic World Dominion

Q & A with Colin Trevorrow

You directed and co-wrote Jurassic World, then went on to produce and co-write Jurassic World: Fallen Kingdom, and now you have come back to also co-write, produce, and direct the final film of the trilogy. What excited you about this project?

Jurassic World Dominion is the film I have been waiting to make the whole time. Dinosaurs co-existing with humans in the modern world is something I’ve wanted to see since I was a little kid. It’s the game we all play with our toys in the sandbox. I thought it would be a challenge to bring those ideas to life and an incredible honour to bring back Sam Neill, Laura Dern, and Jeff Goldblum’s characters, to understand how they have changed and how they see this new world.

All these films somehow manage to grow in size and entertainment value with each new instalment. So, how did you manage to make Jurassic World Dominion bigger, bolder, and even more breathtaking than the previous movies of the series?

I think our story called for it. This film follows two linear stories that run parallel to each other, each drawing closer and closer together until they meet. It gave the movie a massive scope, allowing us to put dinosaurs in different environments and plunge humans into new forms of terror and adventure all over the world. Our job is to show audiences something they’ve never seen before. That’s why we go to the movies. To deliver on that promise, especially for kids, is the best part of my job.

In Jurassic World: Fallen Kingdom, we witnessed how Isla Nublar was destroyed; but some dinosaurs were rescued and ended up escaping into our world, where they are roaming free. So, what has happened in these four years that have passed until now?

They’re just animals trying to adjust to new environments that are extremely foreign to them. They were displaced from their natural habitat and taken to another continent. It’s something that happens in our world every day, and it can be very dangerous and damaging in a lot of ways. They were taken off an island where they had grown comfortably – even though they were already out of their time and didn’t really belong there – and placed somewhere else. That would cause them to be very disoriented, scared and even alarmed at all these new things they’re seeing. In some cases, they’d feel threatened and lash out. It could get dangerous pretty quickly.

Having the dinosaurs roam among us adds a whole other level to the story and the spectacle. As a filmmaker, the possibilities must have been endless.

There were so many things I wanted to see, it was hard to not make an endless movie. But I think the final film landed in a great place. We didn’t get so wrapped up in the possibilities that we forgot the characters. When I recently saw it again, I really forgot everything else that was going on in my life and I was immersed in the adventure. To be able to offer audiences that kind of escape is what we reach for as filmmakers, and I think that right now we need it more than ever.

Chris and Bryce and I have made three films together now, and we’ve grown a lot while making them. We were all relatively young when we shot Jurassic World. We were given a huge responsibility, but we jumped in and did something that felt vital and alive and fresh for all of us. We gave it everything we had, and fortunately for us, the movie worked. When that happens, you are given another opportunity, and in this case, two more. What mattered most to us was that these characters changed and evolved from when we first met them. The Claire you see at the beginning of Jurassic World is completely different from the one we leave at the end of Jurassic World Dominion. And the same can be said about Owen Grady, who takes on a different level of responsibility in this film. Not only is he a parent, but he has formed a really soulful connection with these creatures. Both Claire and Owen genuinely want their daughter and these animals to find their place in the world. Crafting that evolution for the two of them was very important to all of us.

And they have great chemistry on screen.

I try to cast actors who all share a bit of personality with their characters. There’s a piece of Claire and Owen in each of them that makes their performance very natural. If you cast two people with the kind of chemistry that Chris and Bryce have, chances are those characters are going to have the same chemistry.

How was it to have Laura Dern, Sam Neill and Jeff Goldblum reprise their memorable roles and dynamics from the original Jurassic Park? That must have been special to you.

I really connected with Laura and Sam on the idea of having a second act love story in this film. We found that to be beautiful and rare. In rehearsal, they’d talk to each other in character, and during that process, we found moments that made it into the movie. We wrote stuff together that felt authentic and real to them. And I did the same thing with Jeff in a way, who had all sorts of ideas about how Ian Malcolm had or hadn’t changed and what his perspective on our modern world would be. There is a speech that he gives to an audience of young scientists early in the film that I think feels like Jeff’s voice as much as it does Ian Malcolm’s. I found that embracing the actors as authorities on their characters helped us create something that felt very honest and true. That was the only way we could make a film that truly honoured what Michael Crichton and Steven Spielberg created.

You also have some exciting new characters and actors in this film. What did Mamoudou Athie and DeWanda Wise bring to the roles of Ramsay Cole and Kayla Watts respectively?

Mamoudou Athie is one of my favourite actors and someone I wanted to work with so much that I created a role for him. There were no auditions. DeWanda Wise is a force who will be a part of cinema for a long time, and I feel very fortunate to have been able to share her talent with a global audience for the first time. I have no doubt that there will be thousands of young girls dressed up as Kayla Watts for Halloween. She is iconic.

And then, of course, we have the dinosaurs…

This film has taken a lot of steps forward when it comes to how we are portraying dinosaurs on screen. In the previous movies, we were still committed to the original idea in Jurassic Park that the genomes were completed with frog DNA — that these were theme park monsters in a way. But in this film, Biosyn has new advanced technologies, which gave us a different set of rules. We have taken all the paleontological discoveries from the past 30 years and embraced the opportunity to have more accurate animals. So now we have dinosaurs with feathers.

Following up on that, what were the main technical challenges here?

Visual effects in our movies aren’t created solely on a computer. We built over 100 sets and integrated digital creatures and animatronics into practical environments. We learned a lot over the course of the three movies. And I’m glad we didn’t put dinosaurs into our world until this film because we needed all those lessons learned to really understand how we could make it feel like it was actually happening. We made a huge effort to make sure that most of what you are seeing on screen is practical. We used more animatronics than ever before. I think we had more than a dozen dinosaurs operating at one time on a stage. That was a dream come true.

And now that the final chapter of the Jurassic World trilogy will be coming out, how do you look back at the whole experience of having made them?

I’m not sure if I can process my entire experience yet. These movies have been my life for close to a decade. My children were very young when we began, now they’re turning into teenagers. I’m honoured to have been given the chance to create these stories and share them with the world. It was the adventure of a lifetime.

So, what should the audience expect from Jurassic World Dominion then?

They should expect to completely escape the world we live in for a couple of hours. And when it’s over, I hope they’ll leave the theatre feeling that this film had something on its mind that was resonant and meaningful. Dinosaurs are evidence that we’ve only been on this planet for a tiny sliver of time. Our existence is fragile. Even the most powerful creatures to ever walk the earth didn’t last forever.