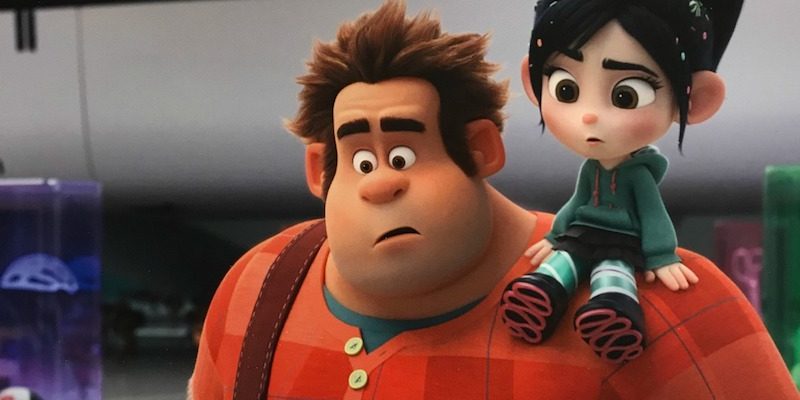 “Two best friends are about to realize that the world won’t always be the same.”

The story follows Ralph and fellow misfit Vanellope von Schweetz. This time, they leave Litwak’s video arcade behind, venturing into the uncharted, expansive and fast-paced world of the internet—which can be both incredibly exciting and overwhelming, depending on who you ask.

What is it about the characters of Ralph and Vanellope that called for an encore?

“Ralph and Vanellope are imperfect characters,” says Academy Award-winning director Rich Moore, who directed the original film (Wreck It Ralph). “But we love them because of their flaws. Their friendship is so genuine—the chemistry between them so engaging—that I think we were all anxious to know more about these characters.”

Phil Johnston was one of the screenwriters on “Wreck-It Ralph” and is back as a writer and also a director. “Ralph and Vanellope had only known each other for a short time, yet they became best friends and we love them for that,” says Johnston. “But it didn’t feel like their story was over—there were more adventures to be had. And Vanellope, in particular, was starting to come into her own.”

“I think people really responded to the fact that it didn’t sit within the typical Disney canon—people liked that we were pushing the boundaries and loved that we were going into a world that, though set in a retro arcade, felt completely modern for a Disney animated film,” says producer Clark Spencer.

“While ‘Ralph Breaks the Internet’ will make people laugh, I think some of the emotional struggles that Ralph and Vanellope go through in this movie are pretty intense and complicated,” continues Johnston. “We’re exploring the reality of all relationships, which come with ups and downs. Friendships are tested from time to time, and Ralph and Vanellope have to navigate the complexity of theirs—while attempting to navigate the vast and often intimidating internet.”

And the internet, says Moore, is massive. “We came away from ‘Zootopia’ with the ability to build a world as big as that city—with its distinct districts that were all fully realized and uniquely populated on a scale that was mind-blowing,” he says. “The technology here has taken a huge step forward in the last few years and we wanted to keep that going with ‘Ralph Breaks the Internet’ since we are dealing with the world of the internet. It’s not only big, it’s dense with characters and places to go. This is probably the most complex animated film we’ve ever made in terms of locations, characters, heavy design and assets.”

“Ralph Breaks the Internet” takes Ralph and Vanellope to a vast, unfamiliar world with endless possibilities. When filmmakers put themselves in the characters’ shoes, they realized Ralph and Vanellope would have completely different points of view when it came to the internet. Says director Rich Moore, “They’re like a couple of small-town kids who venture into the big city. One falls in love with the city, while the other one can’t wait to go home.”

“Ralph is in love with the life that he has,” adds director Phil Johnston. “But Vanellope is ready for a change—she wants to spread her wings a little. That creates conflict within their friendship, which becomes the heart of the story.”

“I love that the film is about change,” says producer Clark Spencer. “Two best friends are about to realize that the world won’t always be the same. The internet is the perfect setting, really, because it’s all about change—things change by the second.”

The story kicks off in the arcade, where Ralph and Vanellope have been living harmoniously—fulfilling their duties in their games during the day and hanging out together in their neighboring arcade games at night. “Vanellope is lamenting the fact that her game is getting a little boring,” says Johnston. “So, Ralph takes it upon himself to amplify the excitement in Sugar Rush. And Ralph being Ralph—it doesn’t go exactly as planned.”

Ralph’s shenanigans trigger a chain of events that culminate with a player in the arcade breaking the steering wheel off Vanellope’s game. Litwak learns that a replacement part would cost more than the game makes in a year; he has no choice but to unplug Sugar Rush and sell it for parts. “The part they need to fix the game is at a place on the internet called eBay,” says Pamela Ribon, who co-wrote the screenplay with Johnston. “Ralph and Vanellope have never heard of the internet, much less eBay, but Litwak has installed a router, so the arcade is actually online for the first time. They decide to take the leap into this unknown world and ping themselves into the internet in order to find the steering wheel and save Vanellope’s game.

“The internet strikes them as loud, fast, crazy and completely unpredictable,” continues Ribon. “Ralph is nervous and uncomfortable, and Vanellope is smitten, of course.”

Ralph wasn’t the only one who was overwhelmed at the idea of exploring the internet from the inside out. According to head of story Jim Reardon, the process of setting the story in the world wide web was intimidating at first. “It’s still intimidating,” he laughs. “It never stopped being intimidating. We looked at how we could make the internet relatable on a human level—like how Game Central Station aka the power strip mirrored a train station in the first movie. In ‘Ralph Breaks the Internet,’ any person who uses the internet has a little avatar version of themselves that does their business for them. It’s like an old Tex Avery joke about the light in the refrigerator—how does it go off when I shut the door? A little door opens and a tiny man comes out and turns the switch off.

“But we didn’t want to make the movie about the internet,” continues Reardon. “It’s the place where the movie takes place, but the story is about the relationship between Ralph and Vanellope.”

Fellow head of story Josie Trinidad adds, “The first movie ends with the idea that these two misfits are kindred spirits—they have the same sense of humor. We didn’t want to just give the audience more of that friendship—we have to see that relationship grow.”

Having ventured into the retro world of the arcade in “Wreck-It Ralph,” filmmakers felt they needed to take Ralph and Vanellope’s next adventure in a new direction. Producer Clark Spencer says the idea of setting the new film in the internet was early and pretty much absolute. “Nothing else was even pitched,” he says. “Going into the ultra-modern world of the internet was not only a nice contrast to the first film’s nod to the arcade, it offered unlimited possibilities. We could actually personify retail sites, social media and search engines—we could give people a look inside their computers when they go online.”

According to director Rich Moore, the possibilities were both exciting and overwhelming. “We were too naïve to realize how overwhelming it would be,” he says. “It was the perfect setting for the story we wanted to tell, but we had to figure out what this place would look like and who would live and work there.

“We ultimately had to make it feel huge, but also specific,” continues Moore. “Narrowing it down to a simple, cohesive world that served the story was the hardest thing for me to get my head around.”

One of the big questions filmmakers faced when creating their vision was how to make it clear to moviegoers where they were. “We made a decision early on that we would make up our own websites like BuzzzTube, some original online games and our search engine KnowsMore,” says Moore. “But we wanted it to be familiar and relatable, too. So we incorporated places like eBay, which is a big part of the story since it’s where Ralph and Vanellope go to buy the replacement part for her game. We have cameos from Amazon, Instagram and Snapchat, among others, and even some international sites, which adds the kind of legitimacy that we wanted.

“People ask us all the time how we went about personifying these websites,” Moore continues. “In the spirit of taking risks and wanting to make this place feel real, we just dove in.”

Adds Spencer, “Just as we do with all of our movies, we worked closely with our legal team to make sure that everything we featured in the film is on the up and up and doesn’t infringe on anyone’s rights—including intellectual property rights.”

From the very first reel filmmakers assembled, there was one sequence the filmmakers and artists felt was a keeper—the scene that welcomes the canon of Disney Princesses to the story in a fun, but ultimately meaningful way. “We knew we’d have to find a balance between making fun of ourselves and celebrating these iconic characters,” says Spencer.

Screenwriter Pamela Ribon wasn’t sure they’d be allowed to import beloved classic characters into a contemporary environment, but she was compelled to try out of loyalty to one character in particular. “Vanellope is technically a princess, but hasn’t really been included among Disney royalty,” says Ribon. “Who wouldn’t want the Hoodie Princess in there? That’s my Princess! I loved the idea of getting her into that club.”