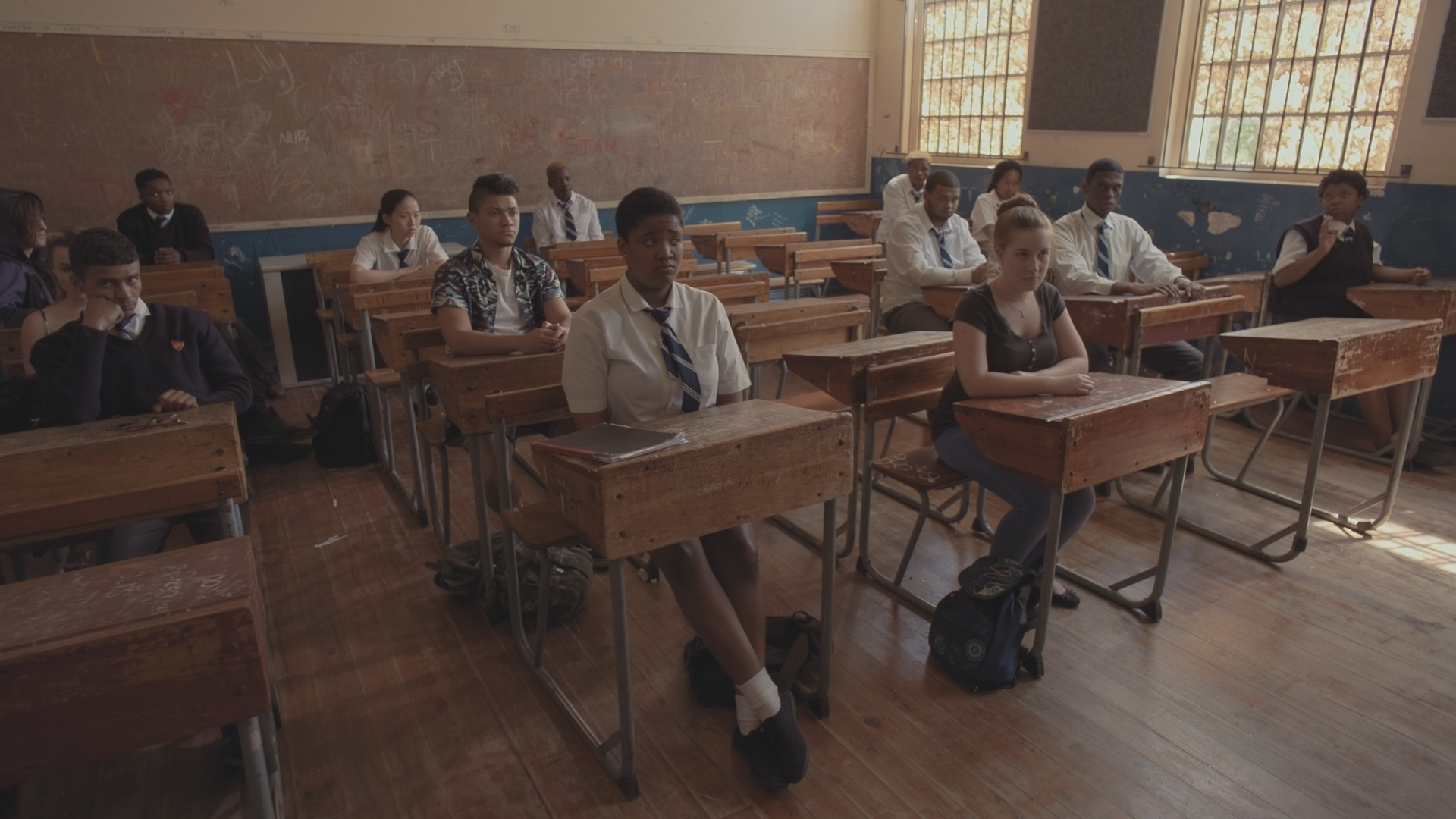 Written and directed by the award-winning Riaz Solker, Sodium Day is a comedy-drama with tragic undertones that features uncanny humour and absurd, but often true-to-life scenarios, telling the story of a neglected Matric class in a dilapidated school on the Cape Flats as they navigate their way through absent teachers, racial tensions, and the threat of local gangsters.

In Sodium Day a day starts with pupils setting off an explosion with a chunk of sodium they stole from the science lab and ends with a different kind of eruption – one coming from a volatile mix of racism, culture clash, gangster invasion, and the impending bad news about Simone, as the last strained strands of the youthful innocence and optimism of 12Y are put to the test.

A newly qualified white substitute teacher, bright-eyed and unsuspecting, is thrust into the rebellious class of 12Y to teach maths, despite the fact that he arrived to teach History and English. The day is further complicated by the arrival of a teacher and a group of students from a rich, upper-class private school, whose day-long visit is part of a cultural exchange programme that no-one at the school was expecting.

Q & A With The Writer & Director – Riaz Solker

Riaz Solker has worked in various capacities as a writer, director, producer, actor and lecturer over the past twenty years in the South African film industry. Some of his credits include an eight-part mini-series Here’s to Good Times, which he wrote and directed, as well as the short film, Past Tense, which screened at Cannes Film Festival and placed third out of 22 000 entries worldwide at the 48 Hour Film competition. Riaz spent many years teaching Directing and Acting at CityVarsity Cape Town, and during this time he witnessed an abundance of young talent emerging in South Africa. It was through preparing and nurturing acting students for their future careers that Riaz began conceiving the idea that would utilize the wealth of talent in front of him. Sodium Dayis his first feature film – a story that draws on his own personal experiences in the government education system, and is filled with characters and depictions that reflect the new South Africa and its struggles.

Why set a story in the school environment, particularly on the Cape Flats?

I had always wanted to make a film set in a South African government high school, I guess ever since my first year of teaching, which was in the mid-nineties. I think that this type of school environment is such an integral part of the South African psyche, and has such a wealth of situations and stories which inform how South Africans see themselves and the world, that it felt like an important story to tell.

It’s an environment that I know well and that I loved being in. I think it’s of vital importance for us as South Africans to engage with the shortcomings in our education system, especially for the disadvantaged youth who have no other options except what the government is providing, as this directly influences the state of our nation going into the future.

The Cape Flats is the environment I know best, but I think the story reflects the situation in many poverty-stricken areas in South Africa and the rest of the world, wherever education is neglected.

When did you start the writing process and how did it unfold?

The film in its current form was written a few months before the shooting started, but the ideas were brewing for a long time before that. It was an organic process. I had pre-formed character ideas, but I also got to workshop with the actors both before and during the writing process, and so the final characters were a combination of what I originally had in mind, combined with the strengths of the actors. There are so many story threads and characters, and they just organically wove themselves into the narrative layers with the help of a lot of coffee and a lack of sleep. Of course, the actors brought many special touches to the characters and were a huge help in the crafting process.

What are some of the themes that drew you into this story?

I wanted to deal with tensions between privilege and poverty, loss of innocence, the resilience of the human spirit, and most importantly, I wanted to place a spotlight on how we as a nation are guilty of dire levels of neglect of our beautiful young people and their potential.

Students lose hope, and their potential is reduced to nothing. Teachers are burned out and become incapable of igniting the drive for success in their students. The staff and students become enemies who fight each other, instead of uniting as a team for the betterment of themselves and the nation. Very often the teachers and students carry trauma that negatively influences them throughout their lives.

I was a student at schools similar to the one depicted. I taught for many years at such schools as well, and I was constantly drawing from that. I also have had the experience of teaching in more privileged environments and overseas in the UK. Every character and event in the film is loosely based on realities I experienced at such schools. Obviously, some narrative license gets employed to be able to structure a piece of entertainment, but the film is as sincere a representation of my experiences as I could put into a film meant for popular entertainment.

What it was like working with a young ensemble cast?

The actors were amazing to work with and brought great creative energy and a lot of trust and hard grind to the table. We had about two months of preparation time which included acting workshops, character development, and rehearsal. I would work with them again in a heartbeat and many of them have stayed in touch, and I’ve used some of them in subsequent projects.

How did you manage the shooting schedule and production limitations?

The shooting process was intense and gruelling. We shot the entire film in 13 and a half days with a very low budget and a very small crew, and 95% of the actors had never acted in a film before, so we were all worked to the bone. We had very long, draining days with a rigorous shooting schedule, and the cast and crew were so very committed to getting it done that we achieved a near miracle in actually getting the film completed.

It took an incredible amount of careful planning and execution. Our DOP, Christian Denslow, understood the production constraints and did a marvellous job of finding efficient ways to light and shoot. Our three-person Art Department, headed by Henriette Neumann, also worked extremely hard to get the look of the characters and shots and doubled as continuity supervisors as well.

It was really, really hard work. I don’t think I’ve quite recovered from the process, to be honest. I guess there are those few times in one’s life that one has to lay it on the line and go full tilt into getting something done. I think a major motivating factor was that this story and theme is so important to me, and I really wanted the story to be told well and get to as many people as possible. It’s my way of contributing to getting South Africa to a better place as a nation, and so I guess I felt almost duty-bound to get the film done.

You screened the film at CTIFF and received a special mention from the jury. How did audiences receive the film there?

The screenings were sold out. People sat on the floor to see it. There was a lot of laughing. A lot! The film got a standing ovation at one of the screenings and the Q&A was a rousing and rowdy debate as the film sparked a lot of impassioned discussion about the issues it represented.

Whenever the film has screened the audience splits into two camps: one side just can’t believe that schools are like that, and the other side says that it exactly describes their school experience.

What does it mean to you to have completed your first feature film?

I’ve waited all my life to get this done. I’m so very nervous and excited and I really hope people come to see the film and feel as though it was worth the price of the ticket to see it. I’ve really put a lot of myself – literally blood, sweat and tears into this project and so it’s quite an honour to get a local cinema release. I hope the film makes a positive impact on the world.

I hope people feel moved. I hope they feel different about our youth and their potential. I hope they start to engage with how to make positive changes in our education system. I hope it’s even just a tiny step towards uniting us as a nation by sharing our experiences. The film has many comedic elements, and so I hope people laugh a lot as well.