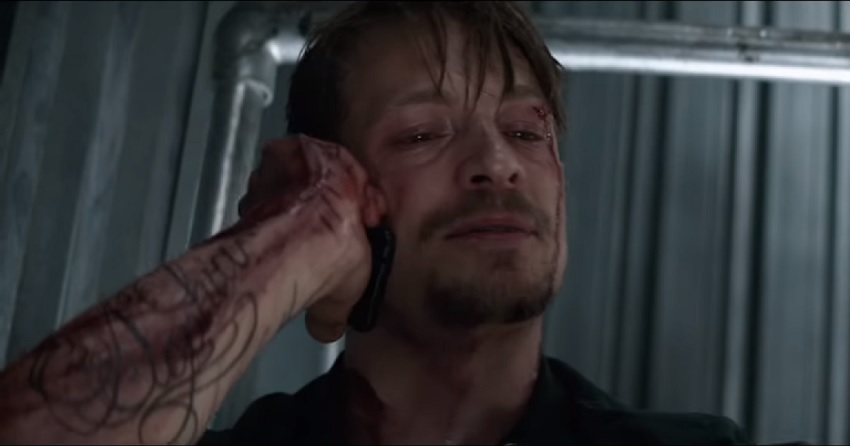 The journey from page to screen for The Informer was not an easy one.

Based on “Tre Sekunder” aka “Three Seconds” a Swedish novel by Roslund & Hellström, the crime writing team of journalist Anders Roslund and the late Börge Hellström, a former criminal turned author, the book was initially optioned by British producer Ollie Madden (Spooks: The Greater Good) for Shine Productions in the UK who commissioned Matt Cook (Triple 9) then Rowan Joffe (The American) to write the script which relocated the story from Sweden to America. In need of a US producing partner, Madden joined forces with Thunder Road Films, the production company behind Sicario, John Wick and The Town.

A year-and-a-half later, The Informer was a week away from filming when it was forced to shut down. Normally that would be it; movies are notoriously difficult to resuscitate once they’ve died. “It’s very hard to get people to re-engage,” explains producer Basil Iwanyk. “We had to start again from scratch.” Which meant finding a new director and a new cast.

Fortunately, British actress Rosamund Pike, the Oscar-nominated star of Gone Girl, had been given the script by her manager, Shelley Browning, and had sparked to it. “It wasn’t the lead,” says Iwanyk who worked with Pike on Wrath of The Titans and A Private War, “but Ros said, ‘I really like this role. Let me know what’s going on with directors.’”

The role was morally conflicted FBI Agent Erica Wilcox. But Pike also loved the script’s old-school vibe which reminded her of the classic New York-set crime thrillers of 1970s, films such as The French Connection and those directed by the late Sidney Lumet (Serpico). “I felt this was the kind of film that might not be made for much longer,” she explains. “It was an intelligent thriller. And that world of cops, the criminal underworld, and the FBI, I find very appealing in films. This would have been the bread and butter of studios at one point. But they’re getting rarer. It’s a proper character piece more than it is an action film, although there is a lot of action in it.”

“It’s the kind of movie I’ve always loved to watch and always loved to make,” concurs Iwanyk who, as an executive at Warner Bros., was involved in Training Day and Insomnia, and produced The Town, Sicario and Wind River.

“All those were cop and bad guy movies, and studios don’t usually make those anymore. I don’t understand why. The movie was designed to be like a Sidney Lumet movie. That was our inspiration. I’ve always loved cops that have enough darkness in them that they’re almost drifting into villain territory, and criminals who have enough good in them that they drift into good guy territory. And when you have all those characters knocking around, that’s really cool cinema.”

Through Browning, the script also found its way to Italian actor-writer-director Andrea Di Stefano whose first feature, Escobar: Paradise Lost, had earned him much acclaim, and who was another client. Di Stefano’s debut had starred Benicio Del Toro as the infamous drug dealer, and the Academy Award-winning actor had talked up the Italian to Iwanyk when they worked on Sicario. “I watched Andrea’s movie and felt there was a lot of potential,” says Iwanyk.

“It was a Pablo Escobar story but not told the way you’d expect it. It was told from a character on the side lines, and was essentially a dramatic romance with this looming figure behind it,” says producer Mark Lane of The Fyzz Facility, the UK financing and production house who joined forces with Thunder Road to bring the second incarnation of The Informer to the screen. “Andrea clearly had a great eye.”

More than that, Di Stefano had a fresh spin on Cook and Joffe’s script that blew Iwanyk away.

“His take was incredible. Being a writer, a director and an actor, Andrea was able to get inside the heads of the characters,” he reveals. “He gave us the version we loved, and an even better, fresher take on it. He resuscitated it. It was kind of miraculous.”

Di Stefano wanted to shift the script’s focus further towards Pete and his family, adding a more emotional core. “In the same way as Escobar, he embraced the family story to drive the thriller aspect,” says Lane. “We understand how much Pete has to lose by setting up the importance of his family.”

With Di Stefano in place, Pike signed on as Wilcox. Now they now needed an actor to play Pete Koslow, a man caught between a rock and a hard place, who will do anything to find his way back to his wife and daughter. “It wasn’t an easy role to cast,” says Iwanyk. “You needed someone with a physicality, because he is, clearly, a tough guy. But you needed someone who could sell the emotion and family stuff. If that didn’t work, the whole movie fell apart. The character had two distinct faces, and we needed an actor who could pull both off. A lot of actors can pull one off, not a lot can pull off both. We also needed someone who felt fresh, because there are so many tired ideas for that role. And Joel checked all those boxes.”

Swedish-born actor Joel Kinnaman is best known for his magnetic performances crossing the film and television spectrums including AMC’s The Killing, Warner Bros’ Suicide Squad and Netflix series Altered Carbon and House of Cards. He also happened to be another of executive producer Browning’s clients, and was someone Pike had long wanted to work with.

“He’s a spectacular actor and was who I envisaged when I read the script,” Pike says. “I have to hand it to Shelley and to Ros,” notes Iwanyk, “They targeted Joel even before he was on our radar. Shelley, being a good manager, gave it to Joel, and Joel raised his hand and said ‘I want to do this movie.’”

“It was a great script,” explains Kinnaman, “and a very interesting character in a really interesting world. It’s fun to play a character that’s undercover, living a double life, because in every scene you have a secret; it’s built into the concept. And I loved this journey of a man who is trying to fight his way back to be with his family. Life has dealt him a very difficult hand but he’s a resourceful man, with a lot of internal strength and a lot of love and connection to his wife and daughter. I thought it was a really exciting journey for me to go on and, hopefully, the audience will feel that too.”

The obsession for authenticity was evident throughout the production. “Andrea was very instrumental in bringing a level of detail and procedural accuracy to the script,” says Pike. “Andrea’s never happy with movie clichés. Movie clichés can be great, they can work, but when you dig a bit deeper you find out how something would really go down; that’s when things become way more interesting. The briefing my character gives at the start of the film was originally in a boardroom at the New York FBI office. When we dug deeper, we found these things often take place in the parking lot of a Toys R Us or a Target, out the back of a van. That’s much more cinematic, exciting and interesting for being real.”

“The great thing about Andrea is he wears three hats,” says Iwanyk. “As an actor, he brought authenticity to the moments and to the deep character details that a lot of writers and directors don’t pay attention to, but actors do. And as a writer, he was able to bring research-driven details into the world and the tradecraft. Between those two things, he gave the film a sense of street cred, emotionally, narratively.”

Pete Koslow (Joel Kinnaman) is a former special operations soldier working as an informant for the FBI to help dismantle the Polish mafia’s drug trade in New York. But when the FBI’s operation goes wrong, resulting in the death of an undercover NYPD cop, Pete is coerced into returning to Bale Hill, the prison he previously served time in for manslaughter, to take down the cartel from the inside.